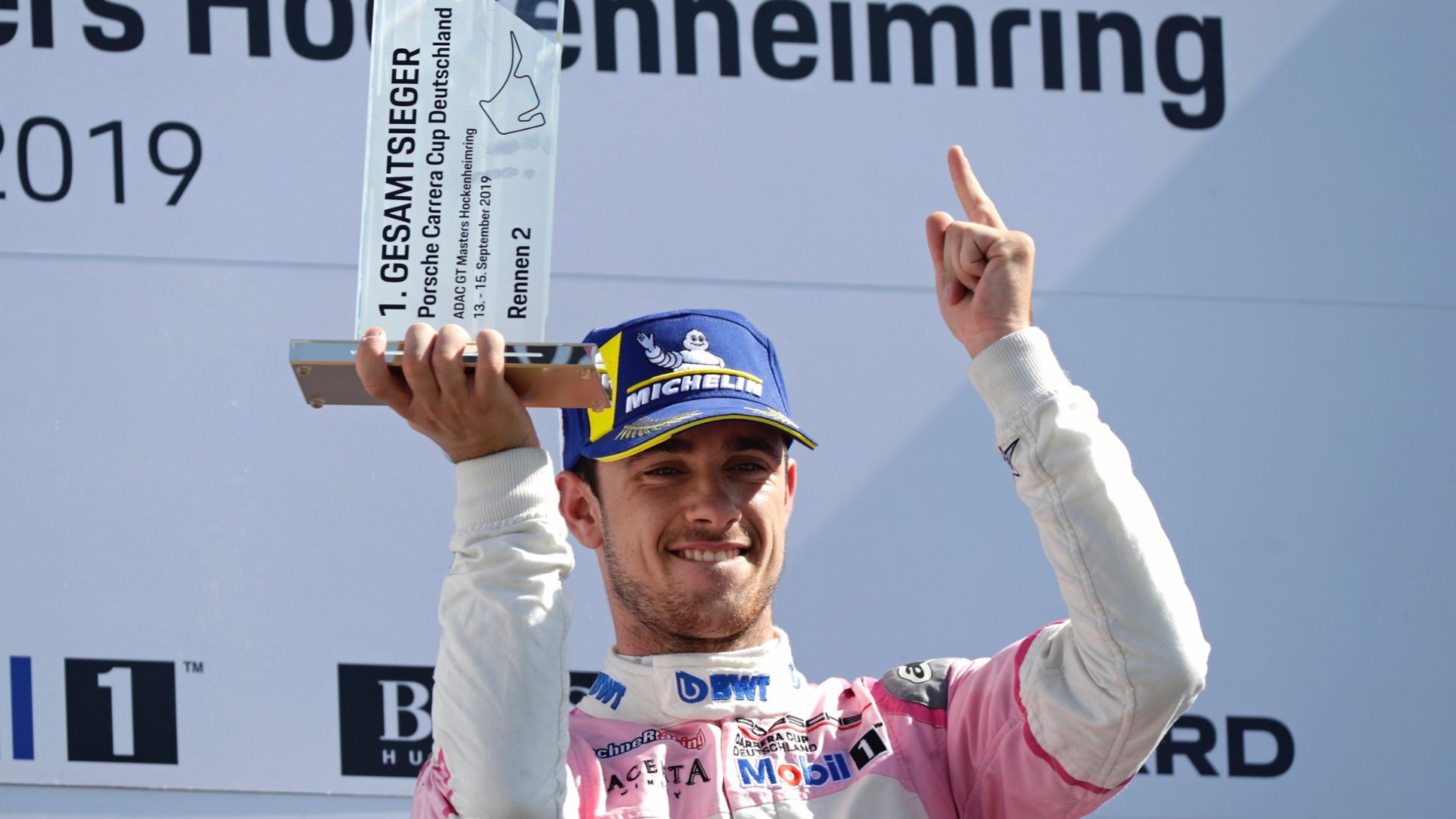 Porsche Junior Julien Andlauer notched up his fifth victory of the season on Sunday in the Porsche Carrera Cup Deutschland.

On the Hockenheimring Baden-Württemberg, the Frenchman beat Porsche Junior Jaxon Evans (NZ/Team Project 1 – JBR) and Michael Ammermüller (D/BWT Lechner Racing) to the flag. “This win was extremely important for the championship. It was a spectacular race with many interruptions and I had no chance to pull clear,” said Andlauer. At the upcoming season finale on the Sachsenring, the championship will go down to the wire between the two Lechner drivers Andlauer (242.5 points) and Saturday’s winner Ammermüller (215 points). Fifty points are still up for grabs. Early title decisions, however, were made in the team and rookie classifications, with BWT Lechner Racing securing the team championship and Jaxon Evans taking the rookie title.

Spectators in the ADAC-GT Masters grandstands witnessed an action-packed race under blue skies and in temperatures of 27 degrees Celsius. Starting from the second grid spot, Andlauer made the best use of his nine-eleven’s 485 horsepower to snatch the lead. However, pole-sitter Evans stayed glued to the 20-year-old’s bumper. The duel for the lead was interrupted three times by safety car phases. With Andlauer unable to shake Evans off, the race remained gripping to the finish, with only 0.297 seconds separating the two Porsche Juniors at the flag. Evans, however, had plenty of reason to celebrate: “It’s great to have won the rookie class title. Unfortunately my start wasn’t so great and that was the pivotal point for my race. Afterwards I was slightly faster than Julien but there was no chance to overtake,” said Evans.

After his win on Saturday, Ammermüller concluded round 14th in third place. This earned the BWT Lechner Racing squad an early team championship title. “Because of the safety car phases there was little chance to put pressure on the leader. Still, the championship is still open. But right now we’ll celebrate winning the team classification,” said Ammermüller. Fourth place went to Jaap van Lagen (NL/Förch Racing) ahead of Dylan Pereira (L/Lechner Racing Team) and Larry ten Voorde (NL/Overdrive Racing by Huber). Leon Köhler (D/MSG/HRT Motorsport) launched a spirited pursuit on the 4.574-kilometre Hockenheimring circuit: The 20-year-old took up the race from the last grid spot and worked his way up the order to finish on seventh place. This effort made Köhler the best driver in the Porsche Carrera Cup Deutschland Talent Pool, a programme for youngsters contesting the one-make cup. Eighth place was achieved by Toni Wolf (D/Car Collection Motorsport).

The race in the amateur class

In the amateur class, Carlos Rivas (L/Black Falcon Team Textar) claimed his sixth win of the season ahead of Stefan Rehkopf (D/Huber Racing) und Jörn Schmidt-Staade (D/Team Allied-Racing). Heading to the season finale at the Sachsenring (27 to 29 September), the titles for both the overall classification and the amateur class are still to be decided: Travelling to the final round with 239 points to his credit, Rivas from Luxembourg holds a narrow lead over Rehkopf (237.5 points). The doubleheader contested in Hohenstein-Ernstthal near Chemnitz as support to the ADAC GT Masters will be a home race for Toni Wolf. The 20-year-old comes from Schönbrunn in the Erzgebirgskreis district.

Points’ standings after 14 of 16 races

The fight for the Porsche Carrera Cup Deutschland is intensifying: At the Hockenheimring Baden-Württemberg, Michael Ammermüller claimed his fifth win of the season. This has enabled the German to slash the gap to the leader and Porsche Junior Julien Andlauer (F/BWT Lechner Racing) to 18.5 points. “I was aware that I had to finish in front of Julien Andlauer to safeguard my chances of winning the title. It was a fiercely contested race. Julien was a touch faster than me on the start-finish straight and put me under a lot of pressure,” said Ammermüller (BWT Lechner Racing). At round 13 of the national one-make cup run as support to the ADAC GT Masters, Andlauer and Dylan Pereira (L/Lechner Racing Team) brought their Porsche 911 GT3 Cup over the line in positions two and three respectively.

The race in the Hardtwald forest in south-west Germany was characterised by multiple duels and two safety car phases. Pole sitter Ammermüller won the sprint to the first corner, only to have the first safety car deployed in the second lap. While Andlauer looked for a chance to overtake, Pereira promptly overtook him. After another interruption a short time later, Andlauer launched a counterattack in lap ten, with success. Over the remaining laps, the 20-year-old gradually closed the gap to Ammermüller and increased the pressure on his teammate. However, the seasoned racer managed to fend him off and took the flag in first place after 16 laps. “While I was duelling with Michael Ammermüller, Dylan Pereira suddenly got past me. Luckily I was able to regain my second place. Ultimately, Michael defended himself brilliantly,” said Andlauer. The trophies were presented to the pair on the podium by Michael Blaufuss, Senior Vice President Air Freight at Agility, and Karsten Sohns, CFO of Porsche Deutschland GmbH.

Pereira celebrated his fifth Carrera Cup podium in a row. “My start was great and at one point I was running in second place. Unfortunately I didn’t manage to exit turn two perfectly and couldn’t defend my position,” said the Luxembourger. Jaap van Lagen (NL/Förch Racing) occupied fourth place ahead of his compatriot Larry ten Voorde (Overdrive Racing by Huber). Porsche Junior Jaxon Evans (Team Project 1 – JBR) secured sixth place. “I’m satisfied with this result. There aren’t many places to overtake here. Now I’ll focus on preparing for the race on Sunday where I start from pole position,” said the New Zealander. Crossing the finish line behind the 22-year-old were Toni Wolf (D/Car Collection Motorsport) and Henric Skoog (S/Overdrive Racing by Huber). Carlos Rivas (L/Black Falcon Team Textar) was delighted with his victory in the amateur classification on the 4.574 kilometre circuit. The other podium spots in this category were occupied by Georgi Donchev (BG/Huber Racing) and Matthias Jeserich (D/CARTECH Motorsport by Nigrin).

In the overall classification, Porsche Junior Andlauer remains in the lead with 217.5 points. Behind the driver from Lyon sits Ammermüller (199 points) and ten Voorde (165 points). Stefan Rehkopf (D/Huber Racing) leads the amateur class with 217.5 points. The best rookie in the championship is Porsche Junior Evans, who has earned 232 points so far this season. Round 14 of the Porsche Carrera Cup Deutschland takes off on Sunday at 11.40am local time and can be watched via live stream on www.porsche.de/carreracup. Evans takes up the national one-make cup from pole position for the first time.

Points’ standings after 13 of 16 races 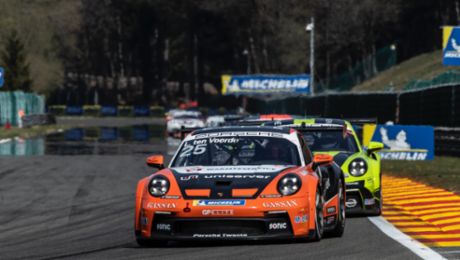 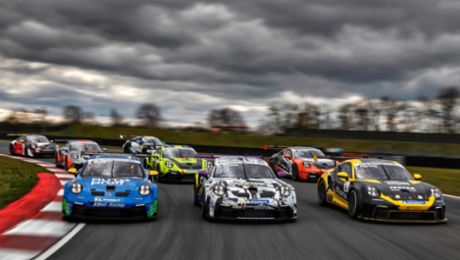