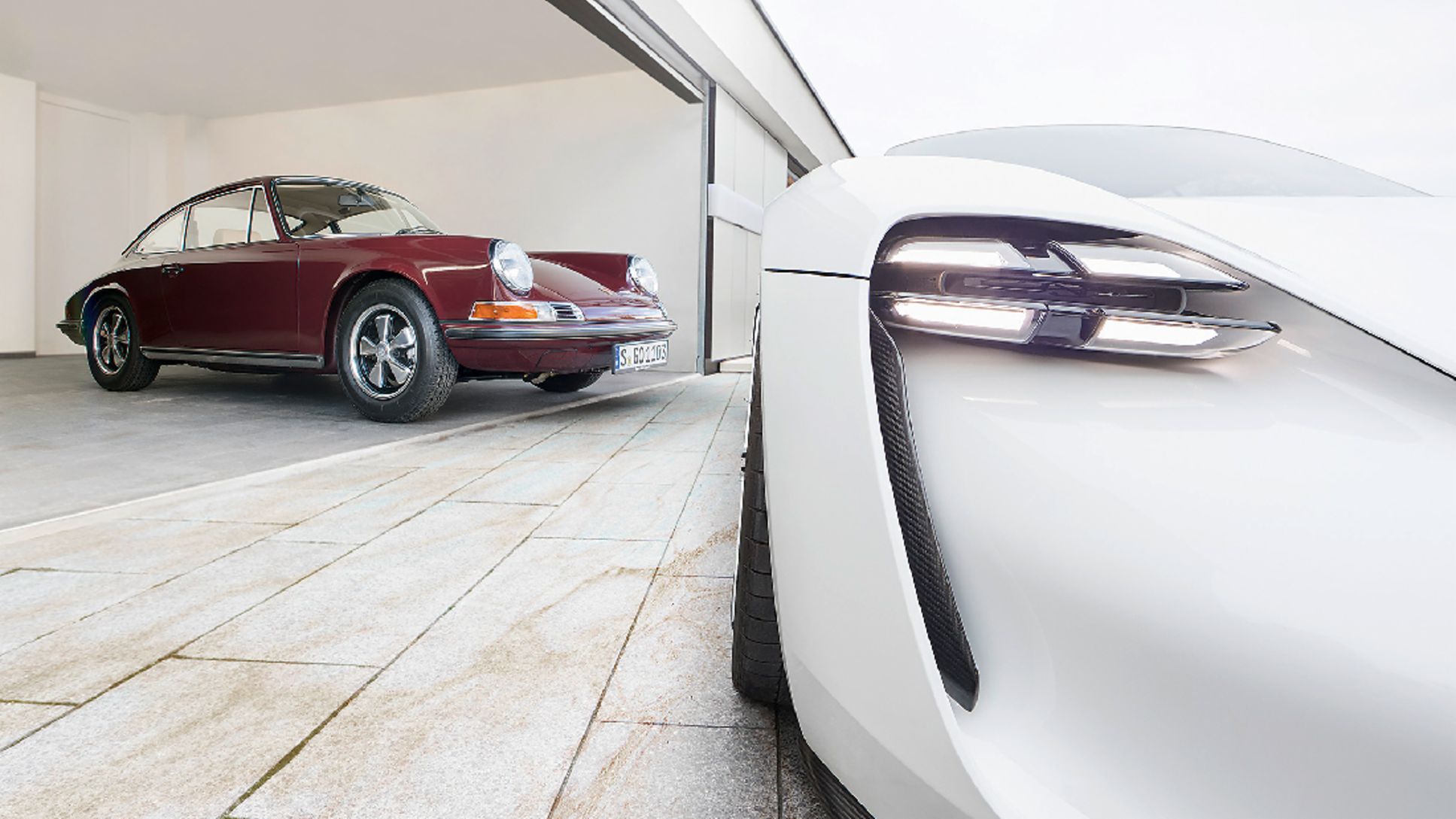 E-mobility? It’s been part of Porsche for more than 50 years already. The Porsche 911 E of 1968 offered power and efficiency thanks to the injection system. Now it meets the Mission E concept car. Is this a classic of tomorrow?

The pure angelic white of the Mission E concept car radiates light; the Porsche 911 E, on the other hand, glows burgundy like the embers of the fires of hell. Angel and devil: the roles seem to have been assigned. You look for contrasts in this pair. – Internal-combustion engine versus electric motor, old versus new, two doors versus four, rear engine versus all-wheel drive. That’s just how people are. They like to think in black and white, because it’s such a lovely, simple pattern. Everything is explained by itself. You hardly even need words. The end.

This same black-and-white thinking, however, can also take you in the other direction, to a view of the world in which the glistening white of the concept car merely serves to dazzle you so that you miss its dark intentions: namely to destroy everything about the classic Porsche. The blood red of the Porsche 911 E, on the other hand, shines out bravely. This, a car more Porsche than almost any Porsche there has been, will not be chased away, will not step aside for an electrically powered car that betrays the roots of the brand. The end.

The same cars, but the roles are reversed. Both views fall short, because the grey in between is what defines the Porsche brand, whose founding father Ferdinand Porsche experimented with electric and hybrid vehicles way back, very early on. His son conceived the first Porsche sports car, which we celebrated in 2018. If all the Porsche cars that followed had remained on the same track that the fans in 1965 still believed to be the ideal – nobody would be talking about the Zuffenhausen brand any more.

The Porsche 356 with its sophisticated four-cylinder flat engine was once considered THE Porsche, while the 911 was seen as a betrayal. That’s not a “real” Porsche, sniffed the defenders of tradition. Today, even the strictest purists see it differently. Whether that will one day be the case with the Taycan, we do not know. But as proven fans of the classic, let’s at least give the newcomer a chance to show its similarities with the car that rolled into the showrooms of Porsche dealerships 51 years ago. And if you look closely, that’s much more than just the “E” in the name of the Mission E concept car. Having said that, the E is an expression of what both stand for: efficiency. In the middle of 1968 – for model year 1969 – the Porsche 911 E replaced the Porsche 911 L. The most important aspect of the “new” model: the mechanical Bosch intake manifold injection system, which raised the engine power from 130 to 140 hp. At 175 Nm, the torque remained virtually unchanged, but kicked in a little earlier. More horsepower per kilogram of unladen weight made for a more relaxed performance in the luxury sports car, which only a little later responded to the desire for more space in the interior with an extended wheelbase.

It is the very same objectives that the Taycan pursues, because it, too, aims to combine efficient power with space – and uses all possible new technologies that are available to achieve this. In the year 2019 we now have drive concepts and materials that in 1968 were still the stuff of dreams – despite mankind being poised to reach for the moon, and the imminent craze for the soft drink Afri-Cola. Commune 1 instead of Roadster “No. 1”, free love instead of a free ride for free citizens. Did the ideas of the German student movement of 1968 lay the groundwork for the concept study? This question has enough explosive force for a lengthy discussion at the next Porsche drinks night, but at the same time there would be no point. The Taycan is almost here. And it is the future. A future that is a lot of fun the moment you step inside. The materials, space and feel are exciting – especially if you love classic Porsche cars.

The music of the future. The 911 E gives a snort of contempt, releasing a small cloud into the cool Stuttgart air. It was already doing a solid 215 km/h with its 140 hp back in 1969. And 100 km/h after nine seconds. Anyone who opens the driver’s door today gets to experience in this car the subtle charm of that Porsche era which consciously defined itself against the excesses of the space age. No trendy attitude, no frills. Round instruments. Central gear stick. Leather. Air cooling. Flat engine. That’s it.

A Porsche of that era smells like a Porsche and feels like one. It is perfect, in its own way. You just have to engage with an old Porsche 911 a little. The six-cylinder engine always sounds a little hoarse, and is dominated by the buzzing of the enormous cooling air fan. The steering has an easy job with the light front axle. Drive-by-wire here would be completely misplaced here. The semi-trailing arm rear axle is basically as good as gold and actually always helps the rear engine not to boomerang. When you’re driving one of these, you wonder why anyone would actually need more from a car than this. And what for?

The concept car wants to give the answers. It whispers them. Very quietly. Anyone who notices the inverse opening doors, the missing B-pillar and the sophisticated display technology, knows at once: this electric racer wants to be more than just one offer among many. Wants to be what the 911 already was back then: unique and perfect in every detail. But is that enough to be a classic? “It never will be!” comes the gloomy prediction of the purists. The electronics of modern cars are too fragile, they say; the batteries aren’t durable enough. And the great variety of equipment means supplying spare parts becomes virtually impossible later on.

But even today, Porsche Classic is producing spare parts using additive manufacturing processes – effectively 3D printing. For example, for the Porsche 959. This is how the Taycan will one day also join the ranks of the vintage cars. You can replace its batteries, and the days of circuit boards that break down are over. Strange to think about the classic status of a vehicle that has not even been built yet. Then maybe you’d prefer the 911 E after all? We owe our thanks to the Porsche Centre Schwäbisch Gmünd for a day with this burgundy dream.

Text first published in the magazine "Porsche Klassik 13".
Copyright: The image and sound published here is copyright by Dr. Ing. h.c. F. Porsche AG, Germany or other individuals. It is not to be reproduced wholly or in part without prior written permission of Dr. Ing. h.c. F. Porsche AG. Please contact newsroom@porsche.com for further information.