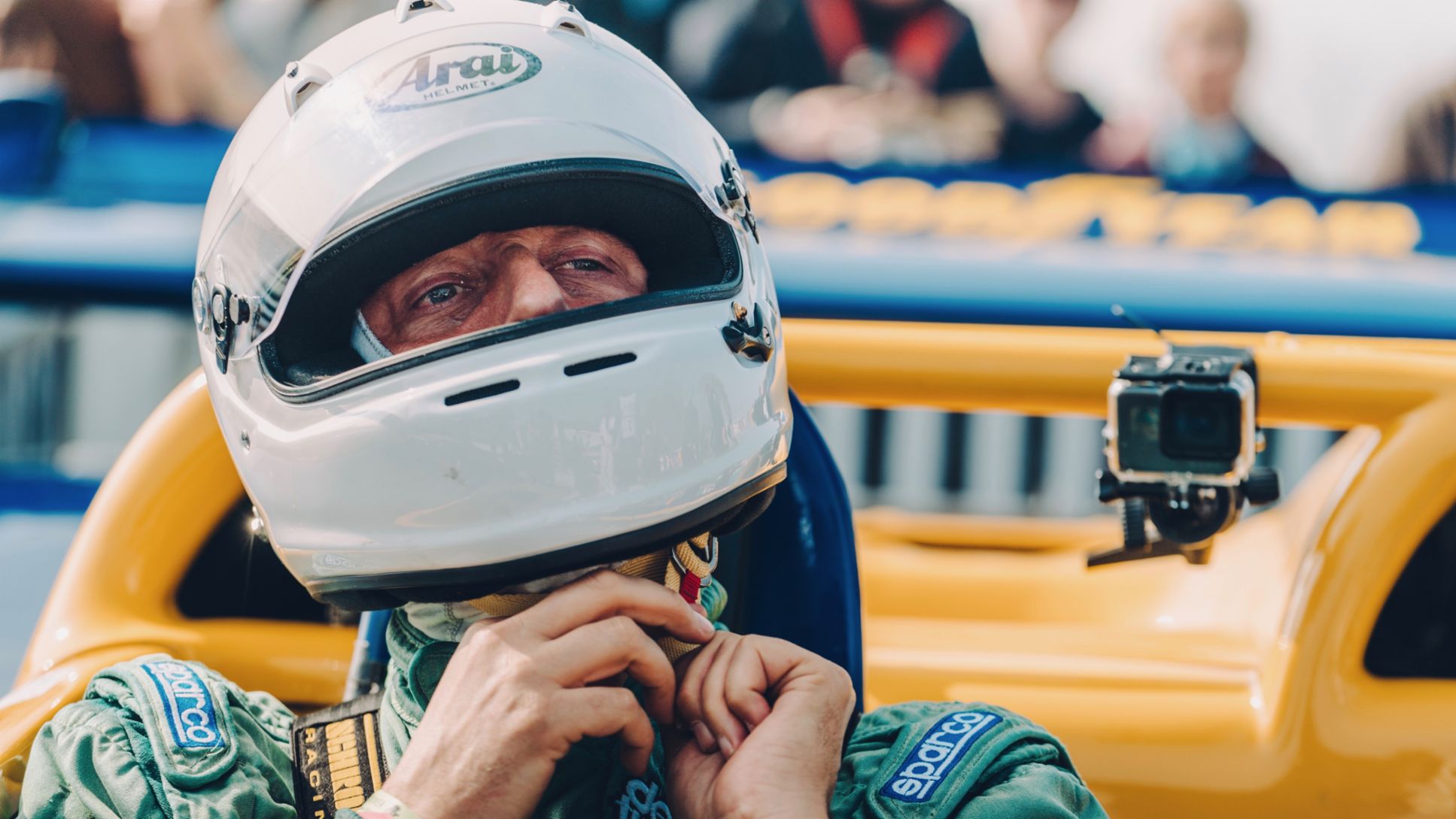 Flat out at 50: Andrew Frankel looks back at his drive in the fearsome 917/30

Earlier this year, world-renowned motoring journalist Andrew Frankel experienced the “best 10 minutes of his working life” driving the legendary Porsche 917/30. Here’s how it played out.

Can it really be 50 years? If you think how little the look of a racing sports car has evolved in that time, and then of the slow, ungainly and upright contraptions that raced 50 years before the Porsche 917, some sense of just how startling it must have seemed in 1969 can be gained.

It was as fast as a Formula One car yet designed to race for 24 hours, a car adored and feared in equal measure by those who drove it, and universally envied by those whose usually thankless task was to try to keep up with it. In 1971 Jackie Oliver lapped Le Mans with a 917 LH at over 250 km/h, hitting 386 km/h on the Mulsanne Straight in the process.

It was that pace that saw the authorities hastily rewriting rules always intended to ensure a car like the 917 could never be built, to finally outlaw it once and for all. A 3-litre engine capacity limit did the trick. But anyone who thought the 917 was finished would shortly think again. For Porsche simply transferred its interests across the Atlantic to the crucial North American market, and adapted the 917 for Can-Am racing, unleashing power the likes of which had never been seen before.

By 1973 the Porsche 917/30 Can-Am car was producing 808 kW (1100 hp) from its now turbocharged 5.4-litre 12-cylinder engine, approximately twice as much power as the original 4.5-litre 917 developed just four years earlier. Even more would have been possible, but it was simply not needed. Its predecessor, the 917/10, won the first two rounds of the championship, the 917/30 the remaining six. Once more the rules had to be changed to render the 917 obsolete.

Just two 917/30s raced in Can-Am, and only by the late Mark Donohue and Brian Redman. One is a long-time resident of a private collection in the US, the other has never left Porsche ownership, and was the first 917/30 to win in Can-Am. The greatest version of what is widely regarded as the world’s greatest racing car. What would that be like to drive?

Somewhat unbelievably, in April it fell to me to provide the answer. I had ten minutes in Porsche’s car at the Goodwood Members Meeting, ten minutes to make come true a dream a lifetime in the making.

Perhaps the most staggering thing of all was not the Porsche, or its power, but the people who brought it. There were no wagged fingers, no rev-limits, no supplication to bring it back in one piece. Just enjoy it. That and confirmation that today it will indeed put ‘at least’ 808 kW (1100 hp) under my foot. It weighs 800 kg.

At first it seems too easy. The clutch is heavy but not sharp, the four-speed gearbox quite slow, but easy to navigate. It feels smaller and narrower than it looks and it responds entirely faithfully to your steering inputs. It’s trying to lull me, make me drop my guard so it can mug me in the most public and humiliating way imaginable. Isn’t it?

Actually no. The throttle is progressive, and limitless though it appears to be, you can control the arrival of the power. Confidence builds. So you think about other stuff, like how well it handles. Grip from enormous Avon race tyres is prodigious and the balance is deliciously neutral. You start to feel you’d like more power. So you press a little harder.

And harder. You start to wonder which you’ll reach first, your fear threshold or the outer limits of the 917’s insane ability to dispense raw power. Straights cease to exist. The noise of the 12-cylinder engine is awe-inspiring but you can’t listen to that because a moment’s lapse of concentration and you’ll have eaten more straight and gained more speed than the car can shed. But the faster you go, the better it gets. You become less, not more afraid. Which is it to be, then? Fear or power?

Neither. I’d forgotten there was a third way. On my last lap, nearing the end of the pit straight at well over 160 km/h in third gear, I finally pressed the pedal to the floor and in an instant those massive rear Avons simply lit up, spinning crazily as the revs leapt. And even then, the car did not deviate one inch from my chosen path.

And that was that. The dream had come true: I’d driven the greatest of the great as fast as I could safely make it go. And the Porsche 917/30 didn’t merely live up to hopes and expectations a lifetime in the creation, it exceeded them in every regard.

Impressions of the 917/30 in Goodwood 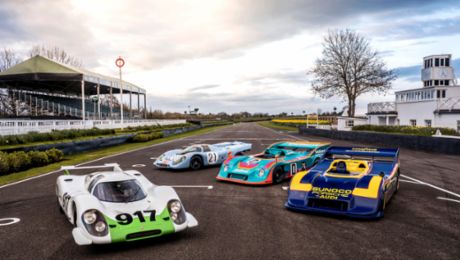 For the first time, Porsche has presented four driving examples of the 917 at 77th Goodwood Members' Meeting.