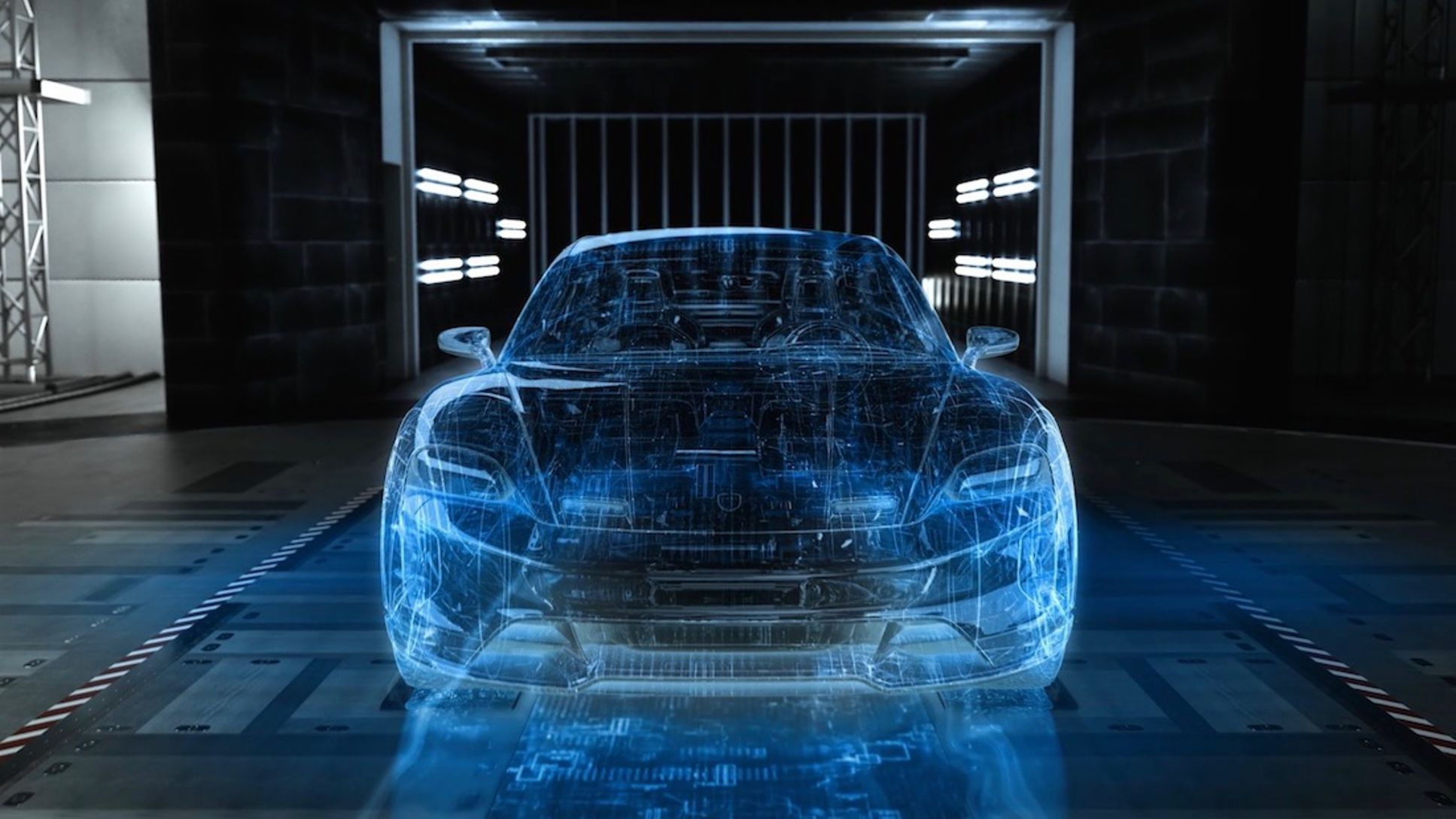 Historically, physical elements have been tested in prototype status. In future, it will be possible to instead digitally experience components and highly networked functions within the overall vehicle at Porsche. The Porsche Newsroom looks at a few examples.

Connected and cross-department collaboration in the electronics department doesn’t stop at digitalisation of course – quite the opposite, in fact. Innovative hybrid simulation and testbed methods are being developed, supplier procurement processes are being supported, and virtual components are being made available, both for prototypes and series production vehicles.

One good example of hybrid simulations at Porsche are matrix beam LED headlights, for which the developers are testing components in a virtual environment: a true-to-life driving situation with oncoming traffic is realistically created as a virtual camera image using 3D computer graphics, and then transferred to the control device in place of the original camera image. Based on this simulation, the control device calculates the optimum light distribution and ultimately controls the modelled headlight LEDs, enabling the current environment illumination to be visualised in virtual form.

“We want to use these methods to make it possible to experience complex vehicle functionalities in the virtual driver’s position in future,” comments Stefan Singer, Virtual Testing. Steffen Strebel, Testing and Validation, adds: “This hybrid approach enables the objective and reproducible testing of situations that are difficult to reproduce in real road traffic.”

The imminent age of electric vehicles brings with it many innovations in the hybrid development process. One example is thermal management, which ensures that the temperature of high-capacity batteries and electric drive systems remains within a defined window at all times. For example, the Taycan uses around 200 of the 15 million calculated hydraulic circuit wiring options – these are intensively simulated on the testbed in the “Flow Laboratory” in Weissach, by connecting real thermal management systems with digital prototypes as well as real control devices. This also shortens the development required for standardisation of types in this respect – and reduces the number of real prototypes required.

“If we work in parallel on the connected system testbeds – known as the ThermoLab – we will also accelerate the development process,” says Daniel Eichacker, Head of Thermal Management for V Engines, looking to the near future. “Then if we can exchange information – temperature, information, for instance – between the flow laboratory and the cooling circuit/conditioning, that’s a real milestone for the thermal model of the overall vehicle.”

One of the most exciting questions for development departments is how customers use their vehicles. After positive testing on the testbeds and roads has taken place, there is no systematic feedback about the vehicles and customer usage behaviour. It has not even been possible, as a minimum, to measure the actual loads during customer use, and to integrate these findings directly into development. “Previously, developments in our cars somewhat based on a wealth of experience that was accumulated over the course of generations,” explains Alexander Haug, Head of Operational Stability of Materials. “This approach will be revolutionised with the Taycan and PDRM.”

PDRM stands for Porsche Driving Reflection Module, which describes a plethora of sensors and information that are already available in the car, and which will in future be used to analyse loads directly in the vehicle – making it possible for developers to see how customers actually use their vehicles. The corresponding infrastructure is already on board: high-performance control devices with online connections (OTA-FC). Around 750 different parameters are read, further processed, and transmitted at regular intervals from the vehicle to the Porsche Data Lake. Using this data and Big Data analytics approaches, the aim is to be able to learn more in future about the actual load.

“How often is the Sports mode button actually pressed? What driving mode is used most commonly? This kind of information, obtained through PDRM, will be integrated directly into the further improvement of our products,” says Alexander Haug, who hopes that the vast majority of Taycan customers will choose to participate in the PDRM project. He emphasises that of course every customer can decide individually whether or not to contribute to data analysis; in fact they must actively confirm their consent inside the vehicle itself. He goes on to say that customer anonymity is always guaranteed: “Even with PDRM activated, we only see that a vehicle has been in a traffic jam for example, but not where and when.”

“Crash test dummies are reaching the limits of their usefulness in a world of automated driving,” explains Bastian Keding, Head of CAE Occupant Protection, as he refers to his motionless workmates. “They simply no longer fulfil the necessary requirements for many future needs –in terms of safety, yes, but also comfort.” Because real people are simply not an option for many tests, developers have turned to the digital world – with great success.

Alongside crash test dummies, Porsche is already using “human models”: simulations that are based on precise data material. These types of models, known as THUMS (Total Human Models for Safety), are very detailed, fully representing the physicality and biomechanics of a human being – incorporating skeletal structure, joints, ligaments, organs, muscles, and even tissue. THUMS are fundamentally different from crash test dummies. The latter were developed to use acceleration sensors, load cells, and position measurement systems to evaluate impact on individual areas of the body. This means that specific dummies must be used for front, side, and rear collisions.

The human model, on the other hand, intends to precisely replicate the entire human anatomy, with the result that THUMS are extremely well suited to kinematic studies that seek to demonstrate movement processes; for example, they help to assess active safety systems such as emergency brake assistants. Current THUMS models make it possible to evaluate injury risks, and as such are valuable in examining new accident scenarios that might arise from autonomous driving. “The human models are increasingly becoming the tool of choice in the development, assessment, and justification of future restraint systems,” explains Keding. “They are also more and more prevalently included in ratings and legislation.” This can be seen in the American NHTSA Legislation and European NCAP (New Car Assessment Programme) for example, which are both fuelling their further use.

Although the true-to-detail simulations enable the representation of greater diversity than physical crash test dummies, they cannot negate the fact that every person is different. Indeed the greatest challenge is in transferring the enormous bandwidth of biological features to human models – a task that requires significant resources, as each individual is different in terms of their flexibility, bone structure, and resulting interaction with restraint systems. “We have been engaging with human models since 2013, and are constantly driving development forward,” comments Keding. “Specific components that go beyond traditional engineering will be necessary for further development – for example from the biomechanics and medicine sectors.”

Virtual tools in the design studio

Pen-and-paper sketches continue to be among the most important tools when generating ideas for automotive designs. However, the growing inclusion of interactive displays in the vehicle – and the aesthetically appealing animations and graphics they feature – necessitates newer tools. “We have developed a series of innovative software solutions to this end,” explains Gantimur Meissner, Head of User Experience, Interior Design. “We’re already using these to great success in predevelopment and series projects.”

With the Xperience Engine, the team from Style Porsche has created a tool with which a complete User Experience (UX) can be simulated more simply than was previously possible – what’s more, it makes simulation possible on any computer or mobile devices, such as smartphones and tablets. For vehicle interiors in particular, where different visualisations run on several displays these days, this opens up entirely new opportunities in the designing of user interfaces (UI) and UX. Designers can use VR glasses very early in the development process to view design models in a three-dimensional space, and can now also evaluate the screen contents and operating concepts in virtual reality. The image that can be seen in the VR glasses can also be easily projected onto a large screen, making it possible for a group of people to clearly view presentations in real time. The illusion can even be further refined by adding physical elements. For example, when VR glasses are used in combination with physical components such as the driver’s seat, steering wheel, and armrest, the individual testing the development gets a striking and realistic impression of the newly designed interior space – which they can even reach out and touch.

The next expansion stage in the digitised design process – known as the UX box – offers a link with interactive media, enabling maximum realism and an extraordinary level of experience. The screens and touch-sensitive display areas in the detailed cockpit replica can be loaded with interactive content based on the operator’s preference. To do this, designers use their smartphone or tablet to access their folder of newly created central graphics, for example, where all the animations and pictograms are stored. Then they can select various designs via smartphone, transfer them to a display in the UX box, and then view them one after the other, within seconds.

“The Xperience Engine forms the foundation for our UX boxes, integrates seamlessly with the visualisation, and can therefore be displayed via innovative digital presentation tools such as the VR glasses,” Meissner reveals. Spanning multiple disciplines, the system created here combines the processes of visualisation with those of UX design. “We believe that one decisive advantage of digitalisation is being able to experience our products earlier, take a holistic approach to their design, and develop them more efficiently,” explains Viktor Weizel, Visualisation Specialist, VR Presentations. 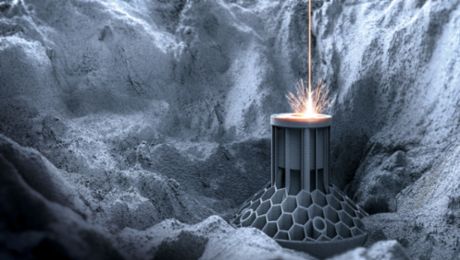 In the factory of the future, innovative production methods will bring major advantages.