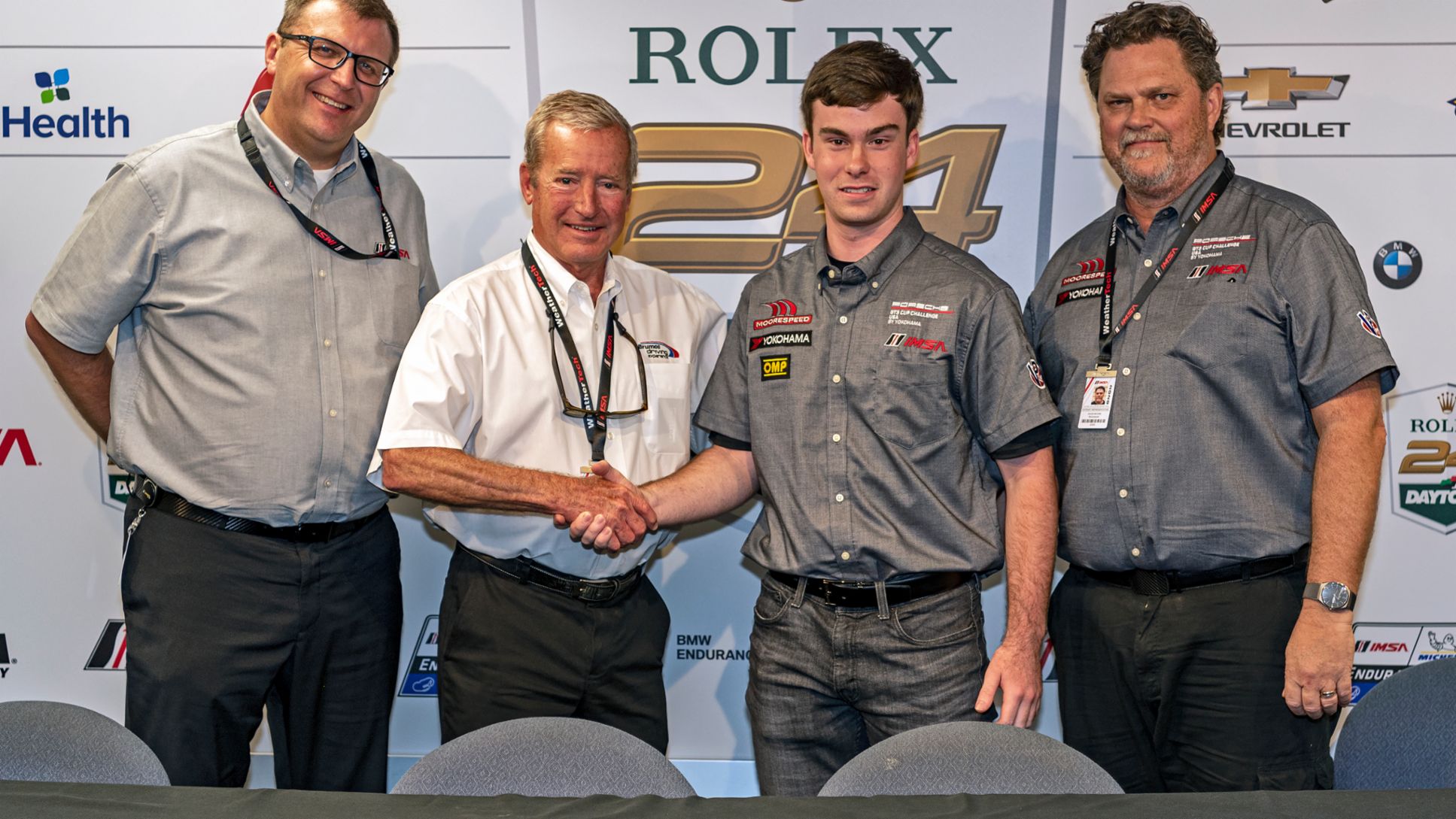 Seventeen-year-old driver Riley Dickinson has been named the 2020 recipient of the IMSA Hurley Haywood GT3 Cup Scholarship. The award, presented during the ROAR Before the Rolex 24 weekend at Daytona International Speedway, goes toward a full season of Porsche GT3 Cup Challenge USA by Yokohama racing. The scholarship is designed to promote young North American talent in the one-make championship and honors American sports car and Porsche living legend Hurley Haywood. Haywood is the most successful American endurance racer of all time with five Rolex 24 at Daytona, three 24 Hours of Le Mans and two 12-Hours Sebring wins in his unrivaled career.

Dickinson (New Braunfels, Texas) finished in third-place as a rookie in the 2019 GT3 Cup Challenge USA Platinum Cup championship standings for current-generation Porsche 911 GT3 Cup race cars. He claimed his first victory in the series in the penultimate round of the season at Michelin Raceway Road Atlanta in October and had seven podium results from the 16-race season during the season.

He will return to the cockpit of the No. 53 Moorespeed Porsche in 2020 with the substantial assistance provided by the IMSA Hurley Haywood GT3 Cup Scholarship. Dickinson earned the scholarship after participating in the North American Porsche Young Driver Academy at Barber Motorsports Park in Birmingham, Alabama last November.

Dickinson was selected as the scholarship recipient as one of four participants in the eighth North American Porsche Young Driver Academy. Dickinson, 21-year-old Britt Casey, Jeff Kingsley (21) and Hanna Zellers (22) all participated in the two-day program that included one day of classroom activity and another of on-track sessions that helped determine the scholarship recipient.

The scholarship provides more than $85,000 in value

Dickinson is the fourth recipient of the IMSA Hurley Haywood GT3 Cup Scholarship, joining Sean McAlister (2019), Max Root (2018) and Jake Eidson (2017). The scholarship was expanded in 2017 from an initial program started by IMSA, Porsche and Yokohama in 2014. Previous IMSA Scholarship recipients include Victor Gomez IV (2016), Elliott Skeer (2015) and Michael Lewis (2014).

The scholarship provides more than $85,000 in value for Dickinson and includes the following benefits:
• Full-season, premium entry for the 2020 GT3 Cup Challenge USA season provided by IMSA
• One free set of race tires per event provided by Yokohama
• $20,000 in parts credit provided by Porsche Motorsport North America
• A custom driver suit and other safety products provided by OMP
• Two full sets of brakes provided by PFC Brakes
• Promotional consideration by RACER Magazine

Dickinson will compete in the full, 16-race GT3 Cup Challenge season that runs from March in St. Petersburg through the weekend of Oct. 7-10 at Michelin Raceway Road Atlanta. The series, which enters its 16th season, is one of Porsche’s 24 one-make series in the world.

In 2020, Yokohama is entering its 12th season of support for the series, which produces intense competition for semi-professional and aspiring professional drivers.

Hurley Haywood, Porsche Legend.
“I’ve been impressed with the quality of the attendees during each of the eight iterations, and this past November’s Porsche Young Driver Academy was no different. The young drivers come from increasingly diverse backgrounds and are sharper, more media savvy and confident every year.

“I enjoy giving back to talented young drivers, so I see it as a natural, next step combining IMSA and Porsche Motorsport’s efforts together for the scholarship, and I am proud to see it grow. With Riley Dickinson already having national, and international experience in a 911 GT3 Cup race car, I am confident his natural talent in and out of the race car will only continue to flourish.”

Riley Dickinson, Driver, Moorespeed Porsche 911 GT3 Cup / 2020 Hurley Haywood Scholarship Winner.
“Having been selected as the recipient for the 2020 IMSA Hurley Haywood GT3 Cup Scholarship is a huge honor and especially meaningful to me for several reasons. Being able to represent an American racing icon like Hurley Haywood is something that I’m going to be extremely proud of throughout the entire year and will look back on with great memories. I can’t thank everyone enough involved with the Porsche Young Drivers Academy and the scholarship for making it a professional grade learning experience for me and the other contenders.”

Dr. Daniel Armbruster, President/CEO, Porsche Motorsport North America.
“We are pleased to be aligning two significant Porsche development driver programs; the North American Porsche Young Driver Academy and the IMSA Hurley Haywood Scholarship, in 2020. In the past, these efforts have run parallel to one-another benefitting dozens of drivers and now, working closely with IMSA, Yokohama, Porsche Cars North America and all of the partners of the scholarship, we have combined them.

“This will give a most deserving young driver better tools to make concrete career advancements. Congratulations to Riley who proved himself on track last year in the Porsche 911 GT3 Cup race car and in all aspects of the eighth annual Porsche Young Driver Academy. Teamed again with Moorespeed, we are confident Riley will make a mark on the 2020 IMSA GT3 Cup Challenge USA by Yokohama advancing his own career and further establishing a clear path for other drivers on the Porsche Motorsport Pyramid here in North America."

John Doonan, President, IMSA.
“Riley Dickinson is a rising star in sports car racing and a worthy recipient of the 2020 IMSA Hurley Haywood GT3 Cup Scholarship. He was outstanding as a rookie in the 2019 Porsche GT3 Cup Challenge USA by Yokohama season and will be a championship contender in his second year with Moorespeed in 2020. We’re grateful to our partners, Porsche, Yokohama, OMP, PFC Brakes and RACER magazine, for their continued support and to the legendary Hurley Haywood for lending his name to this most-prestigious scholarship.”

David Moore, President, Moorespeed.
“Our team is really happy for Riley and honored he was selected for the Hurley Haywood Scholarship. To be chosen over the other top young drivers invited to the Porsche Young Drivers Academy is an honor he earned. He learned a lot and was truly humbled getting to work directly with Hurley himself along with Pat Long, David Brown, Jamie Howe, Drew Dayton and other top professionals assembled by PMNA. There is no doubt getting their nod of approval means an awful lot to Riley and I can’t think of a more deserving young man.”

Drew Dayton, Motorsports Manager, Yokohama Tire.
“Yokohama is honored to be associated with a legend like Hurley Haywood, and supporting this scholarship is the perfect way to show our commitment to the development of racing talent in North America. We are excited to help support Riley in his second year of GT3 Cup Challenge racing, his performance in 2019 showed consistent improvement throughout the year and his ability to take on all of the challenges thrown at him during PYDA make him an excellent choice for the scholarship.”