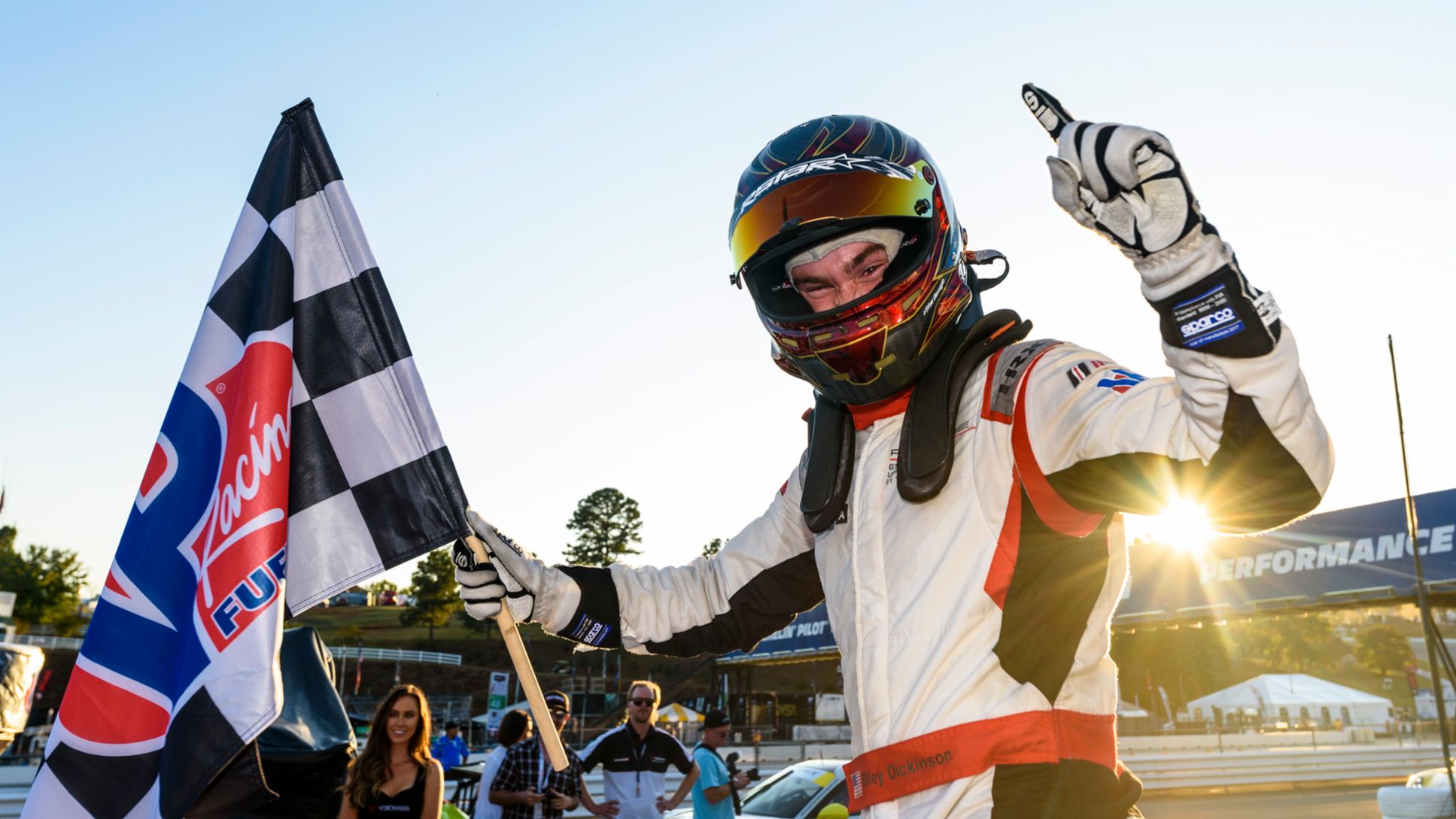 Each week we will spotlight one of the 33 drivers who have taken part in the North America Porsche Young Driver Academy.

Riley Dickinson is somewhat of a household name when it comes to karting in the state of Texas. Starting at seven years old, the New Braunfels native began racing karts at his local track and at the beginning of 2013 he began traveling the country. Climbing the ranks and earning success on the karting tour, including a national championship along the way, Dickinson decided in 2018 to make the jump to cars. A test in August at VIRginia International Raceway (VIR) resulted in securing a drive in the 2019 IMSA Porsche GT3 Cup Challenge USA by Yokohama.

“I got a Miata to train for the jump. Late in August we got connected with Moorespeed and did the test. I performed well enough that we made a deal after that and we got to work,” offered Riley looking back.

"No corners were cut to make it a high-level, professional program."

Only 16 at the time, Dickinson was quite young even by rookie standards running in GT3 Cup Challenge. That wouldn’t deter the Texan from finishing third-overall in the championship, topped with victory at one of the final two races of the season in the Motul Petit Le Mans at Michelin Raceway Road Atlanta. The early success did not go unnoticed in the paddock.

“I still remember it clear as day,” enthused Riley. “I was in school, in calculus class, and I got a message on Instagram from Patrick Long,” recalls Dickinson. “He had said he wanted to talk about some things. Honestly, I thought I was in trouble or did something wrong. Then he called me that evening and told me they wanted me to come to PYDA. I started shaking if I’m being honest.”

The Texan had been chosen as one of the participants to attend the 2019 North American Porsche Young Driver Academy (PYDA). Held at Barber Motorsports Park in Birmingham, Alabama, the Academy is the sports car manufacturer’s North American opportunity to evaluate young driving talent. Based off the program provided through the Porsche European Junior driver selection process, this event gives the likes of Dickinson and others the chance to see how Porsche vets young talent. With many industry specialists in attendance, the operation is run under the watchful eye of the co-creator, North America’s only Porsche factory driver, Patrick Long.

“I was grateful to be there and to see how Porsche is investing in young drivers like me, it really made PYDA that much more special. No corners were cut to make it a high-level, professional program. With all who were there, it made it that much more special to be a part of,” said Dickinson.

Porsche brings together multiple professionals within motorsport for the two-day event where the focus is on more than just what the drivers can do in the car. Emphasis on personality profiles, media training and technical knowledge are some of the key areas the broad PYDA brushstroke covers. It’s an effort on the German marque’s part to not just see how the young participants handle the cars, but to set them up for their careers going forward.

“The whole Sunday was eye-opening to me,” reviewed Dickinson. “I had never had that before in my career. From the evaluation of my social media to being critiqued on what to do in a professional interview, it was stuff I hadn’t really thought about. I took a lot from that day off-track.”

For the first time, one of the four drivers of the 2019 class was selected as the recipient of the IMSA Hurley Haywood Scholarship. As the “winner” of the Academy, the chosen driver receives a package of assets that can be taken to teams interested in running the Porsche GT3 Cup Challenge USA by Yokohama the following season. Even at just 17 years of age, Dickinson exemplified what a scholarship winner should embody at the PYDA, even impressing driving legend Hurley Haywood who attended and co-facilitated PYDA for multiple years.

“It was incredible that Hurley was there,” said Dickinson. “Probably the coolest part of the whole weekend was doing the first few laps behind him. One of the things he said really resonated with me, ‘it’s better to be the one listening than the one that’s talking.’ I just watched how he acted and what he was saying and took in that knowledge.”

The importance of PYDA is for Porsche to invest in young driving talent and pay it forward. Just like Haywood, every driver has to start from somewhere and the opportunities that open up for the participants after they leave Barber Motorsports Park is what makes it all worth it.

In 2020, Dickinson will look to do better than a third-place finish in the Porsche GT3 Cup Challenge USA by Yokohama championship. The Texan drives for the Austin-based Moorespeed team and plans to hit the ground running when the season gets under way.