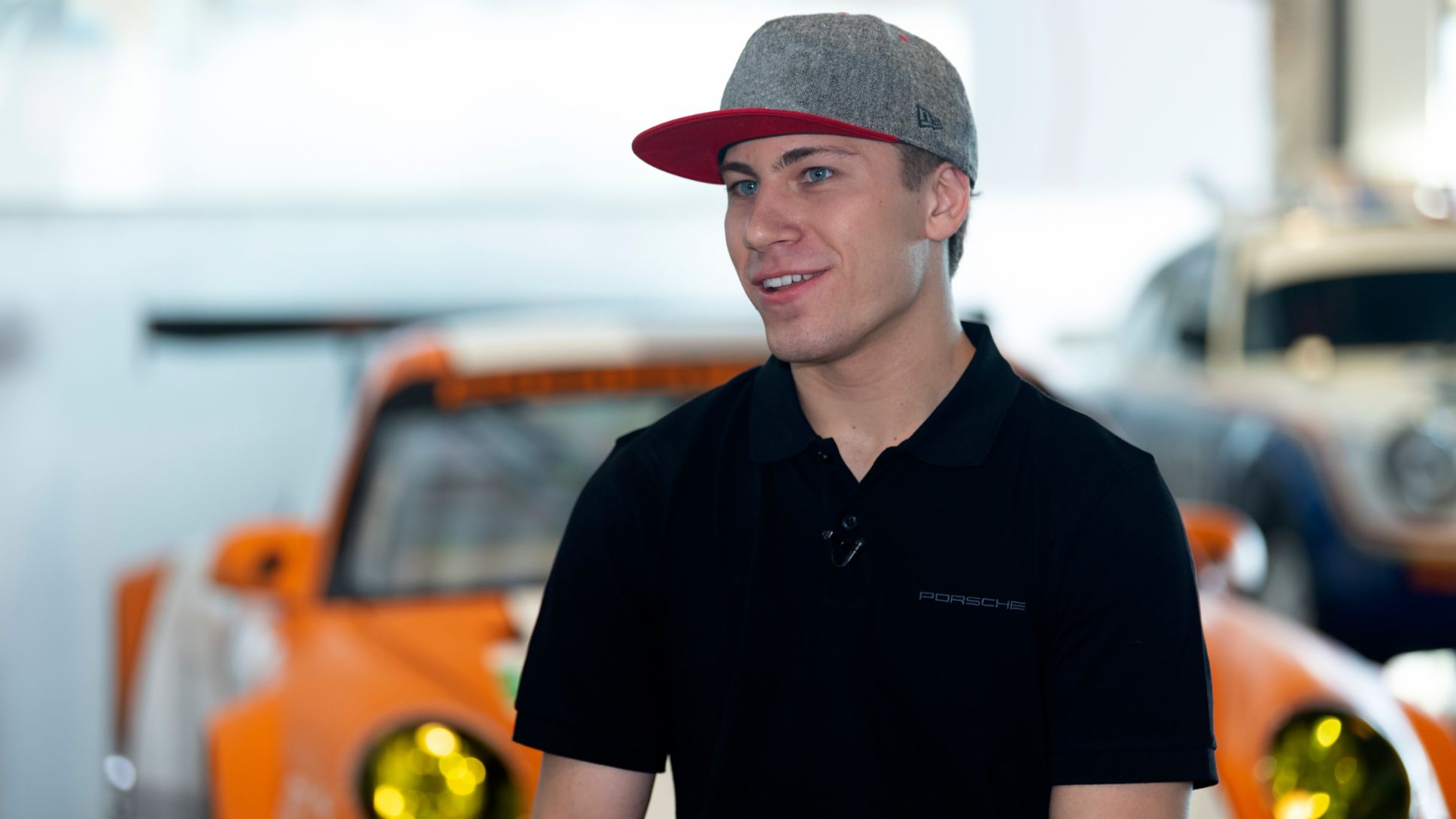 Mitchell deJong began real world racing when he was five-years-old. He worked through karts as well as Pro Buggies and other off-road race machines before being led into Rallycross. While he was a teen, he got introduced to online racing alongside his real-world challenges in Rally. iRacing, a leading online racing simulation platform, was a tool deJong saw that could help him in the real world.

“Somewhere around 13 or so my friend introduced me to it,” remembers deJong. “At that time, I just got into it for fun. The main reason I stuck with it was because it became a training tool for me. It helped me with my real-world racing. Then when it became more legitimate, I began holding it to about the same weight.”

"As you’re developing your career and navigating the racing world it’s huge to have that guidance to be on the right path that Porsche gives at PYDA."

Esports gradually became the main focus for the young American as he started winning races and finishing full online iRacing Series towards the top of the pecking order. 2018 was his most successful campaign to date where he finished second and third in two separate iRacing championships driving GT3 cars on real-world tracks.

“I can still remember the day,” reflected deJong on when he was asked to join the seventh class of the PYDA. “I was at a sim racing event in Germany, so it was like 3am when I got the call. I wasn’t expecting it at all but was super excited to get the opportunity. Pat [Long] reached out initially. I had met him once before at an event and we had connections through Red Bull, but this was obviously different.”

Porsche had seen deJong’s success in the virtual world of racing and decided to invite him to the 2018 North American Porsche Young Driver Academy. That year the two-day event was held for the only time in its history at the Porsche Experience Center LA, a facility sharing the home of Porsche Motorsport North America, in Carson, California. The German marque invites young driving talent to show off their skills as well as learn what race teams and manufacturer’s look for in drivers through a full day of classroom teaching.

“Driving was the most fun part,” laughed deJong. “But there are a lot of cool aspects at PYDA that are very important. More personally, I really enjoyed the mental training because that has a huge impact on your performance.”

Aside from driving in a racing simulator, Porsche invites industry specialists to take part in the weekend and teach up the drivers on ways to maneuver the complex world of motorsport. Media training, personality profiles and technical briefings are just a few of the highlights that take place away from a race car.

“You have a wealth of knowledge at your disposal. It covers all the bases and hits on things I wouldn’t have thought about on my own,” mentioned the Californian. “Especially as you’re developing your career and navigating the racing world it’s huge to have that guidance to be on the right path that Porsche gives at PYDA.”

In addition to its in-house industry leaders, Porsche brings several key consultants to the annual event. Two key components from Porsche are the German marque’s only North American factory driver Patrick Long and driving legend Hurley Haywood. The two championship-winning drivers are in attendance to give their perspective on what it takes to get the chance to drive for a brand like Porsche.

"As a motorsport history nerd, it was just amazing to hear some of the stories they told."

Long is the co-creator of the PYDA. He built the program to mirror the European process for selecting Junior drivers that he experienced first-hand. Haywood’s name graces the scholarship given to the ‘winner’ of the event. The IMSA Hurley Haywood Scholarship provides assets that the driver can take to race teams looking to race in the IMSA Porsche GT3 Cup Challenge by Yokohama for the upcoming year.

deJong looked back on the one-on-one teaching from Haywood and Long: “Putting it all in perspective, it was super humbling. They’re both very successful in their own rights and to be offering guidance to us that don’t have nearly the experience they do was special. They showed us what works and what doesn’t, and it was huge to get help putting you in the right direction. It makes a world of difference to us.”

Leaving PYDA with an understanding of what Porsche expects in its drivers, deJong continued competing in Esports. In 2019, one of the series he participated in was the inaugural season of the Porsche TAG Heuer Esports Supercup. Driving virtual Porsche 911 GT3 Cup race cars on the iRacing platform deJong finished fourth in the overall standings. The result gained him automatic entry into the second year of the world’s first manufacturer-supported one-make virtual race season in 2020.

“I love the competition,” enthused deJong. “There’s no better place in sim racing than this series. The top 20 get invited back and I was able to finish pretty well last year. It really takes the weight off your shoulders when you get points consistently and are able to requalify.”

Online racing is a relatively new concept when it comes to forms of motorsport. The racing deJong competes in online is more complex than booting up a console and racing friends around the world. Simulator racing, done right, includes a complete “rig” with a steering wheel, pedals and other bits finely tuned as if it was the cockpit of a Porsche sports car. With real-life racing being put on hold while the world handles the COVID-19 pandemic, more and more drivers are turning to sim racing as a way to compete as well as staying sharp during the downtime.

“The dynamic is different, there’s definitely a lot more drivers coming into ‘our world’ since things have kind of exploded,” said deJong. “But there’s no extra pressure. I love to battle, and my goal is still wins and podiums. Finishing in the top-three would be great.”

A strong line-up of 40 sim racers from 14 countries makes the final grid for the second-season of the Porsche one-make sim racing series. 22-year-old Formula 1 driver Max Verstappen (The Netherlands) is one of 20 drivers to secure a spot via the “Porsche iRacing Cup” qualification procedure. The second-half of the grid consists of the top-20 competitors from the 2019 season of the first Porsche Esports initiative.

"The fact that [Porsche] acknowledge it and take sim racing seriously puts them in the lead over other manufacturers."

“Crossovers like this a few years ago didn’t seem likely at all. If you had told me awhile back, I’d be driving against a guy like him (Verstappen) I wouldn’t have believed you,” said the Californian.

“It really helps the scene as a whole,” commented expert sim racer. “The fact that they acknowledge it and take sim racing seriously puts them in the lead over other manufacturers. Having such a brand like Porsche legitimize what we’re doing is incredible for the scene. With what they did last year I’m stoked for the future.”

The first round of the Tag Heuer Esports Supercup is slated for May 2. Sim racers, deJong included, will start their virtual campaign for the championship on the Circuit Park Zandvoort. Racing for the VRS Coanada Simsport team deJong will be looking to improve off his already memorable rookie year in Supercup.