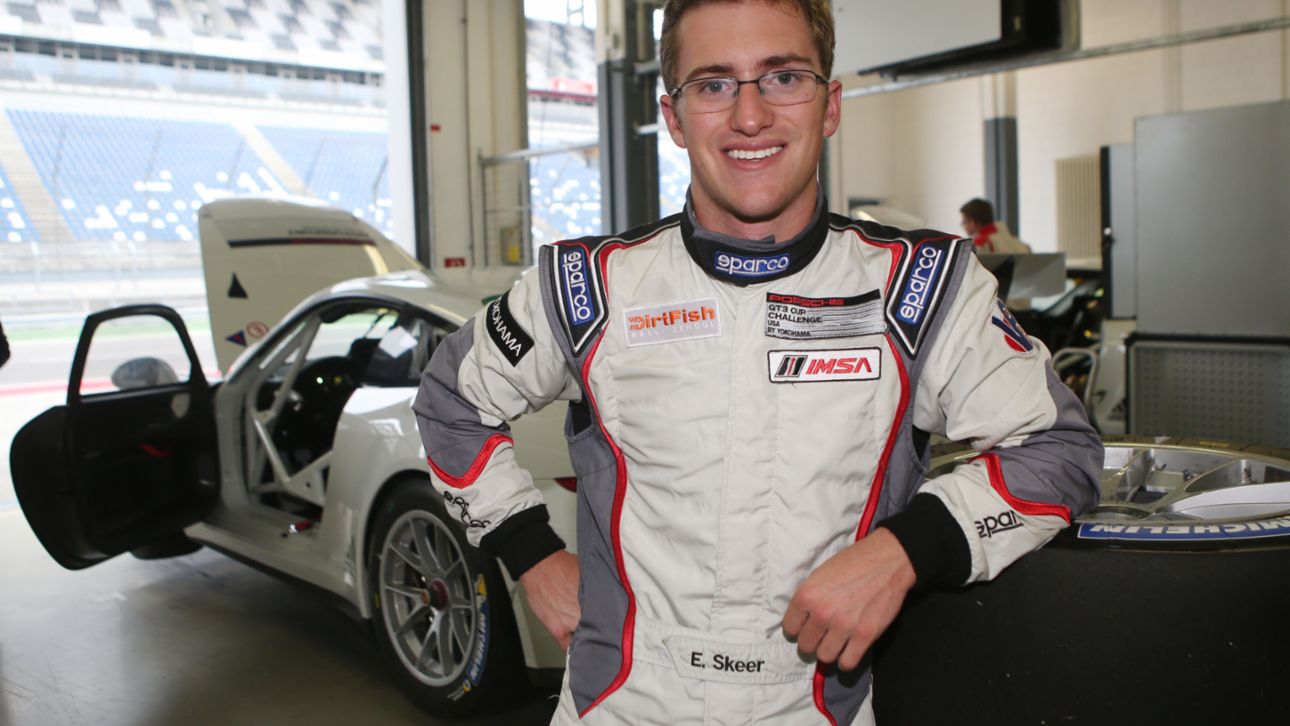 In his own words, Elliott Skeer’s racing career as a kid was ‘pretty traditional.’ He drove go karts until he was 16 years-old and then jumped into cars, his first being a Mazda, to further his racing career. He was invited to Mazda’s MX5 Cup Shootout in 2011 where he won, promoting him to a factory seat for two years. In 2014, Skeer competed in select IMSA Michelin Pilot Challenge races that boosted his resume and gained him more experience in sports cars. Then at the end of that racing season Elliott became associated with the brand he had grown up watching as a kid, Porsche.

“I was a sports car kid over F1. Patrick Long was my childhood hero. It was watching Porsche in the ALMS and seeing Flying Lizard and going then down to Pat. When I found out about the PYDA it was such a cool feeling,” said an elated Skeer. “It was a once in a lifetime shot coming up for me.”

"It was two days of jumping into the unknown."

The North American Porsche Young Driver Academy is held by the German marque each fall after the racing season. Four young drivers are invited to get a chance to glance behind the curtain at how the sports car manufacturer not only evaluates talent, but gives them up with tools that can be used in any number of ways whether at a race track or not. Skeer was one of the 2014 invitees that embarked on Barber Motorsports Park in Birmingham, Alabama to take part in the two-day event. “

I had watched a video that was made from the year before as a starting point so I could see what I needed to learn about the event. It was two days of jumping into the unknown. It was a friendly and supportive event but also very structured. Everything about it was professional,” remembered the Southern California driver.

J.F. Musial, renowned videographer within the automotive world, made the video Skeer referenced before joining the PYDA as he does for each edition of the event. He is just one of the many industry specialists that join to help the young drivers throughout the weekend. From media training to personality profiles to technical briefings, much more is taught and offered to the participants than what it takes to drive a Porsche 911 GT3 Cup race car.

“The first day was fully in depth; seeing what Porsche is looking for in drivers. To me they are the sports car brand so getting to understand how I need to conduct myself, how to handle certain experiences outside of the car and just take care of myself was great stuff,” added Skeer. “As for inside the car, there was zero external reference which I loved and that was how I flourished.”

The PYDA does have a ‘winner’ that is given a package of assets that can be taken to teams wanting to run a season in the IMSA Porsche GT3 Cup Challenge USA by Yokohama. Today, that top driver is awarded the IMSA Hurley Haywood GT3 Cup Scholarship. However, the year Skeer was the standout driver, the scholarship did not yet exist. However, while at PYDA, racing legend Haywood is there to give his perspective to the drivers as well as North America’s only Porsche factory driver, Patrick Long. That was worth its weight in gold to a driver like Skeer.

"As a motorsport history nerd, it was just amazing to hear some of the stories they told."

“It all started for me at dinner the night before… picking their brains. Pat was my hero and Hurley was my dad’s. As a motorsport history nerd, it was just amazing to hear some of the stories they told. It was interesting to hear the similarities of what they both thought it took to be a race car driver. No matter if it’s the old era or more modern, a lot of the same is necessary,” said Skeer.

Porsche invests in young drivers by inviting them to the PDYA at Barber in the hopes that they go on to drive Porsche race cars around the world. However, more importantly and immediately, Porsche instills into young drivers the values necessary, in the eyes of the German marque, to succeed.

Success followed as Skeer was chosen from the largest PYDA class – five participants – to represent North America in the Porsche Junior Shootout in Germany. While not selected as one of only two Porsche Juniors from around the world, he returned to win the IMSA Porsche GT3 Cup Challenge USA By Yokohama Championship in 2015. The past few years Skeer has been a driving coach in Southern California, of which Porsche race cars are included in his repertoire. With no real-life racing going on in 2020 currently due to the COVID-19 situation, Skeer has moved into simulator coaching and helping prep those on the mental side of racing. He is focused on possible one-off seat time in multiple different series as well when rubber can finally hit the track once again.