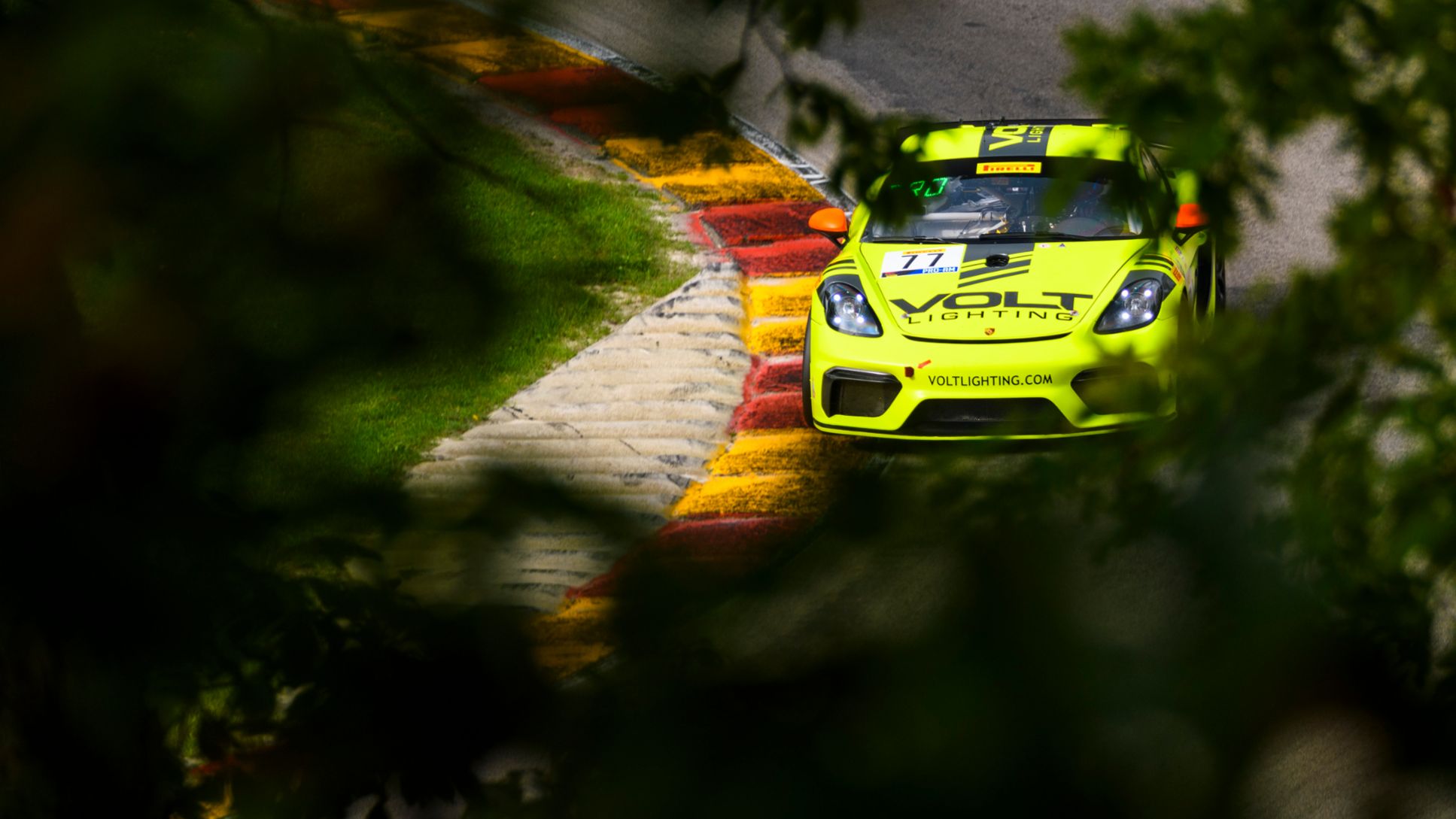 The IMSA Porsche GT3 Cup Challenge USA by Yokohama series traveled to WeatherTech Raceway Laguna Seca for Rounds 13 and 14 of the 2019 one-make race series. In the end, the two leading challengers for the Porsche 911 GT3 Cup Drivers’ Championship split the 45-minute events on the Monterey, California circuit. Canada’s Roman De Angelis won Sunday’s second-race to bring his season-total to ten event victories in the No. 79 Kelly-Moss Road & Race Porsche 911 GT3 Cup car. His prime competitor for the Platinum class championship, Max Root (San Diego, California), charged to the victory in Race 1 on Saturday.

“I think it was pretty important to get that one off my chest" Roman De Angelis, Driver, No. 79 Kelly-Moss Road & Race Porsche 911 GT3 Cup

De Angelis, a 2018 Porsche Young Driver Academy graduate, leaves the Monterey Peninsula with a 58-point lead over Root with only two rounds remaining at Michelin Raceway Road Atlanta on October 10 and 11. Root, the 2018 IMSA Hurley Haywood Scholarship winner, must close the gap to below 35 points in Race 1 at the season finale weekend to keep his chances in the No. 7 Wright Motorsports Porsche 911 GT3 Cup car alive entering the last race. De Angelis must collect enough points to keep the gap above 35 to secure his first Porsche GT3 Cup Challenge USA title.

“I think it was pretty important to get that one off my chest. Max had a really good run there with three races in a row. We had a tire go in (Race 1 at) Virginia and then I made a mistake myself in Race 2. Then, yesterday he just outpaced us.”

Alan Brynjolfsson and Trent Hindman continued to add to the victory tally for the Porsche 718 Cayman GT4 Clubsport. The pair used the perfect balance of the German marques’ GT4-class competitor to win on a rain-soaked Road America circuit Sunday, September 22. The SRO GT4 America SprintX and East Championship contenders piloted the No. 77 Park Place Motorsports-prepared mid-engine machine to a convincing 22-second overall victory. The win also represented a class win for the East Championship for the Dallas, Texas-based race team. Hindman is a graduate of the Porsche Young Driver Academy (PYDA).

The No. 47 NOLASPORT Porsche 718 Cayman GT4 Clubsport earned the Pro-Am class victory. Matt Travis and Jason Hart drove the No. 47 to win, fourth-place overall. Another PYDA grad, Alec Udell co-drove the No. 2 GMG 718 Cayman racer with Jason Bell to a fourth-place finish in the Pro-Am class while Michael Dinan and Robby Foley raced the No. 21 Flying Lizard Motorsports Porsche to fifth-place in the class.

In the Amateur (Am) class of the East Championship, Porsche 718 Cayman GT4 Clubsport teams took two of the three spots on the podium in Sunday’s 60-minute race. The No. 17 TRG Porsche shared by Derek DeBoer and Sean Gibbons finished in second-place with the No. 69 BGB entry of Thomas Collinwood and John Tecce was in third-place.

“I love Road America and I love driving in the rain, so today feels great to get the win. It helped racing in the Sprint event earlier in the day for the conditions, but we’re very excited."

The 2019 IMSA Porsche GT3 Cup Challenge Canada by Yokohama season comes to a close this weekend with a headlining, doubleheader season finale at Circuit Mont-Tremblant. The Porsche one-make series makes its return to Mont Tremblant for the first time since 2012 and all eyes will be on 18-year-old Roman De Angelis. The Belle River, Ontario-native holds a large lead in the Platinum Class championship heading into the final rounds. The 2018 Porsche Young Driver Academy graduate is looking to secure his first Porsche GT3 Cup Canada championship since winning the Gold Class title in 2017.

The season has been more than I could have ever asked for and I think it would be great to end the season on a high note." Roman De Angelis, Driver, No. 79 Mark Motors Racing Porsche 911 GT3 Cup

Porsche GT3 Cup Challenge Canada first goes on track this Friday for a pair of practice sessions ahead of qualifying on Saturday at 9 a.m. ET. Race 1 goes green later that day at 1:00 p.m., with Race 2 scheduled on Sunday also at 1:00 p.m. Fans on site have the opportunity to attend a driver autograph session on Saturday at 11:00 a.m. located outside of the Porsche hospitality tent in the Display Area.

Live timing and scoring is available for each session on scoring.imsa.com. and Race 2 will be live streamed on the Porsche GT3 Cup Challenge Canada Facebook page.

“To start off, I would just like to thank Mark Motors for having me drive for the third consecutive season. I can’t thank them enough for the opportunities they’ve given me over the past three seasons that have allowed me to be where we are today.

Moving into the race weekend, I am not only excited to head back to one of my all-time favorite tracks, but to end the first of the two Porsche GT3 Cup Challenge championships in, hopefully, good form! The season has been more than I could have ever asked for and I think – although a solid finish is all we need to wrap the championship – It would be great to end the season on a high note and get a few more wins, as well as that championship for the team.”