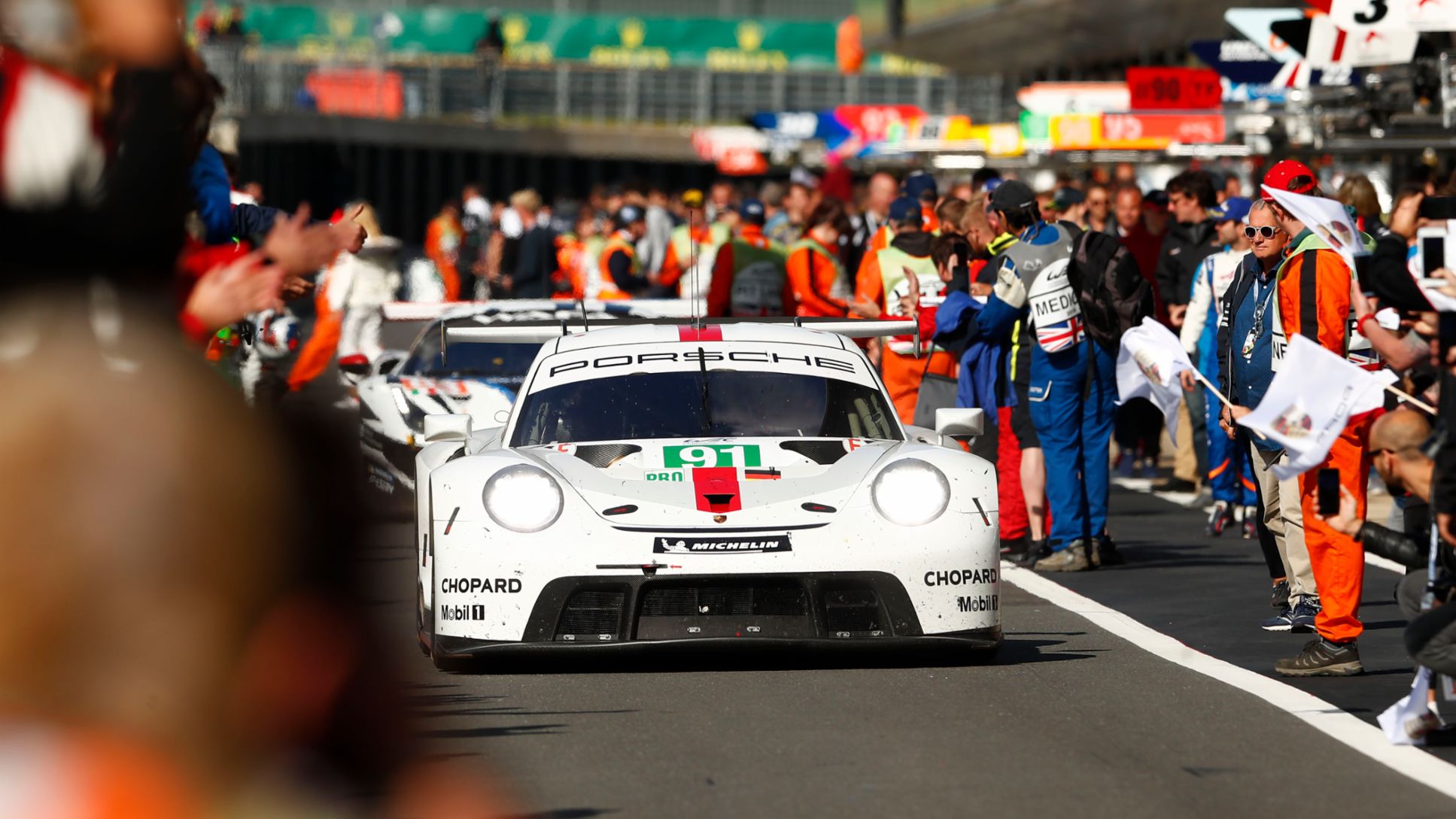 The new Porsche 911 RSR (2019 model year) has secured a victory at its race debut. At the season-opening round of the FIA World Endurance Championship (WEC) at the Silverstone Circuit in Great Britain, Gianmaria Bruni (Italy) and Richard Lietz (Austria) crossed the finish line first in the No. 91 Porsche GT Team entry in front of 49,600 spectators. The reigning world champions Michael Christensen (Denmark) and Kévin Estre (France) claimed second-place in the ca. 515 hp No. 92 sister car. The one-two finish by the German brand’s factory WEC program came in both wet and dry conditions giving a strong indication of the newest 911-based race car’s world championship potential.

“A one-two finish at the first race – the debut of a racing car can’t get better than that." Jeromy Moore, Technical Project Manager Porsche 911 RSR

After a mediocre qualifying performance, the two Porsche 911 RSR run by the factory squad started the four-hour race from positions four and six on the grid. In sunny conditions in the early phase, the two new LMGTE-Pro class racers initially made up very little ground. A heavy rain shower near the race’s midpoint changed the situation significantly. In contrast to the rivals, the Porsche GT Team opted for rain tires - a decision that would prove vital. The drivers made good use of the improved tire grip on the wet track and managed to pull clear of the field. The margin, however, disappeared when the safety car was deployed after two hours of racing. In the remaining 120-minutes, the drivers staved off attacks from the competition on a drying track and crossed the finish line in first and second-place, the margin between the two new 911 RSR race cars, which is based on the high-performance 911 GT3 RS road car, was 3.802-seconds.

In the LMGTE-Am class, the best-placed Porsche 911 RS (last year’s model) finished in fourth-place with the all-British driver line-up of Michael Wainwright, Ben Barker and Andrew Watson in the No. 88 Gulf Racing entry. Fifth-place went to the No. 77 Dempsey-Proton Racing with Porsche Young Professional Matt Campbell (Australia), Christian Ried (Germany) and Riccardo Pera (Italy). The sister car with the starting number 88, in which Porsche Young Professional Thomas Preining (Austria) had his first outing, finished in eleventh-place. The two Porsche 911 RSR campaigned by Team Project 1 yielded positions six (No. 56) and ten (No. 57).

“At its race premiere, the new Porsche 911 RSR clearly exceeded our expectations. Congratulations to the drivers and the team for a perfect performance at Silverstone. This great success was only possible because the entire Porsche Motorsport team did such excellent work. Many thanks to everyone who contributed to this project and made the new car into a winner.”

“What a fantastic weekend. Our customer team Proton Racing won the ELMS on Saturday, and a day later, we achieve a one-two with the new Porsche 911 RSR in the world championship. It doesn’t get better than that. A huge thank you to our team at the track and to everyone at the Weissach Motorsport Center. The hard work of the last few months has paid off.”

“A one-two finish at the first race – the debut of a racing car can’t get better than that. I think our new Porsche 911 RSR has clearly underlined its qualities right off the bat. I thoroughly enjoyed the race, especially the final result. I’m sure that all the development engineers in my team who followed the race from Germany felt the same way.”

“It’s incredible. We travelled to Silverstone with the goal of achieving a solid result at the maiden race of the new Porsche 911 RSR. And we picked up exactly where we left off last season. Perfect teamwork, strong performances in the cockpit and a fast racing car – these factors enabled us to bring home this one-two finish. A dream has come true for us.”

“Our team opted for the ideal tactic. I was in first-place after our pit stop and had a clear run. This enabled me to build a decisive lead, which we maintained to the flag. A debut of a new racing car can’t be better. I’m proud to be part of this incredible team.”

“We spent a year developing the new car and couldn’t wait for the first race outing. To promptly win the race is perfect. We made this achievement possible through perfect tactics. There is still a lot to learn with our new Porsche 911 RSR. At the next round we want to perform even stronger in the qualifying.”

“It was a great race with many duels and plenty of action on the track. That was great fun. It’s a pity for us that we narrowly missed out on winning, but for Porsche it was a perfect start to the new season.”

“Our car was fast over the entire race. Unfortunately, it wasn’t quite enough to win. Perhaps we lost crucial time at the last pit stop. We’ll now have to take a close look at that.”

In the No. 7 Volt Lighting Cayman driver Alan Brynjolfsson took home third-place in the Sprint Am Class in both Race One and Race Two. After qualifying in seventh-place in the Am Class, 14th overall, Brynjolfsson was awarded Hard Charger and Best Start awards for Race One. In Race Two, Brynjolfsson made another impressive charge for his third-place finish, earning a sixth-place result overall.

In SprintX East competition, Brynjolfsson continued to display his understanding of the complicated 11 turn, 3.4-mile New York road course. In Race One, he handed co-driver Trent Hindman a clean Porsche in position to fight for a win. Hindman took the No. 77 straight to the front for the Pro-Am class victory.

Race Two in SprintX East took a more dramatic turn, giving the same outcome. Hindman started in fourth-place overall and jumped to third in Turn One at the start. He never looked back, turning over the Porsche to Brynjolfsson in second-place overall, first in the SprintX East Pro-Am class, after pit stops. Nearly as soon as he took to the track a yellow flag for significant debris and damage to the safety barrier slowed the race. The yellow would remain for the remainder of the race. Hindman and Brynjolfsson would claim the double wins in the SprintX East series.

“It was a great weekend for the Park Place Motorsports team as we walked away with two third-place finishes and two wins. I am very happy with how we all performed and hopefully Alan gained a bunch of points towards the Porsche Cup. We still have four more very busy race weekends ahead of us.”

The Porsche GT Team campaigns a pair of 911 RSR finished in special liveries to bid farewell to the GTLM-class of the IMSA WeatherTech SportsCar Championship. 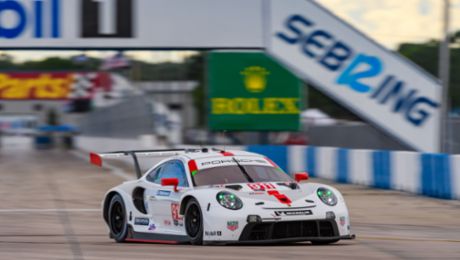 Porsche has a clear goal for the final round of the IMSA WeatherTech SportsCar Championship in Sebring (USA) on November 14. 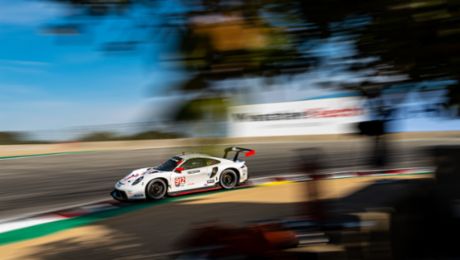