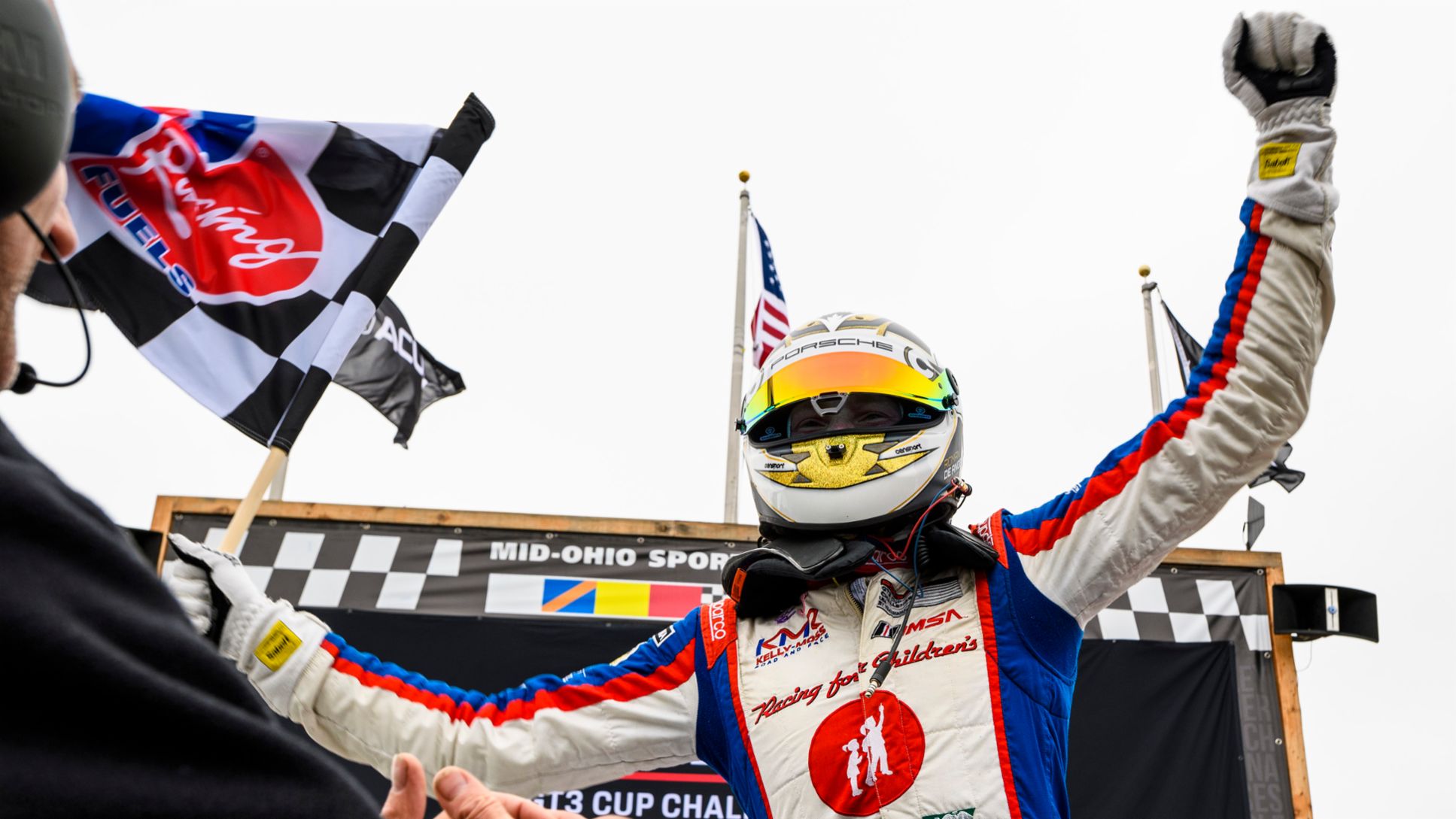 Splitting driving duties between Porsche 911 GT3 Cup race cars prepared by Kelly-Moss Road & Race in the USA Championship and Mark Motors in Canada, the 2018 Porsche Young Driver Academy graduate put on a driving clinic in the pair of Porsche 911 GT3 Cup race cars. Having shown impressive potential in 2017 at the age of 16, De Angelis became the youngest driver to win a Porsche GT3 Cup Challenge Canada race in the Gold class. The tall redhead took on the challenge of the top Platinum class in 2018. He barely missed a beat from his rookie season chasing eventual 2018 Canadian Champion Zacharie Robichon and USA-titlist Trenton Estep last year.

I really want to move forward and I’m looking forward to new competition and battling with some people that can teach me some more things about racing. Roman De Angelis

Few records now exist on either side of the US-Canadian border that do not carry the name: Roman De Angelis. In the 16 race, eight-event weekend, season that made up the Platinum class in the Porsche GT3 Cup Challenge USA, De Angelis piloted the No. 79 Kelly-Moss Racing for Children’s Porsche 911 GT3 Cup car under the checkered flag first 11 times. He stood on the class podium 15 times. In his native Canada, the prodigy campaigned the No. 79 Mark Motors Racing Porsche 911 GT3 Cup race car to an even more impressive record of 11 wins in 12 races. Two event weekends were shared by the two championships: the Circuit Gilles Villeneuve in Montreal and Road America in Elkhart Lake, Wisconsin. De Angelis won all four races at both tracks.

Among the accolades and awards presented to the champion of each series is a one-year lease of a Porsche 911 road car. For his Canadian title, De Angelis was gifted a silver Porsche 911 Carrera 2S while in the United States he was presented a white Porsche 911 Carrera 4S. De Angelis will take delivery of the iconic sports car awarded for his title in Canada. Meanwhile, as an example of his generosity and kind nature, the teenager donated the car awarded by Porsche Cars North America (PCNA) for the USA championship to longtime Kelly-Moss charity partner the Racing For Children’s organization. It will be used to conduct “hot laps” for the Alabama Center for Childhood Cancer and Blood Disorder patients at Barber Motorsport Park near the Children’s of Alabama hospital in Birmingham.

As a result of this selfless gesture, PCNA and Porsche Motorsport North America (PMNA) presented De Angelis a “Key to Flacht”. This exclusive experience will give him a behind the scenes look into Porsche A.G. and its Motorsport department in Germany. He will receive this when his titles are celebrated at the annual Porsche Night of Champions, December 7 in Stuttgart.

The close of the SRO GT4 America season at Las Vegas added another trophy to the German sports car maker’s already impressive 2019 display shelf. Porsche took top honors for Manufacturers in the SRO GT4 America SprintX Championship with its customer-entered Porsche 718 Cayman GT4 Clubsport. The award celebrated success in the 16-round championship that pits road-based GT race cars against one-another in a 60-minute, two-driver format. One of the most successful teams was Park Place Motorsports, which earned the Team Championship in the SprintX East series.

The international GT4 race car classification is one of the largest and most competitive sports car series in the world. Represented by customer racing programs in both Pro-Am and Am classes, seven different manufacturers competed throughout the season, which opened at the Circuit of the Americas (COTA) in Austin, Texas on March 1 – 3 and closed at Las Vegas Motor Speedway (LVMS) in Nevada, October 7 – 10.

In other SprintX categories, Jason Hart and Matt Travis earned second-place in the Pro-Am Drivers Championship with the No. 47 Nolasport Porsche 718 Cayman GT4 Clubsport. That gave the Louisiana-based program a second-place result in the Team Championship as well. In the SprintX East Championship, Park Place Motorsports drivers Alan Brynjolfsson and Trent Hindman brought home a third-place season finish in the Pro-Am class championship with the neon yellow Porsche and the SprintX East Team Championship. Meanwhile, Thomas Collingwood and John Tecce, driving the No. 69 BGB Motorsports 718 Cayman GT4 Clubsport, were awarded third-place in the Amateur (Am) category for SprintX.

Three additional strong season-long performances came out of the TRG stable with Sean Gibbons who finished as runner-up in the SprintX East Am Drivers’ chase. In the SprintX West standings for Amateur drivers, Kevin Woods and Chris Bellomo finished in second-place with TRG team car James Rappaport and Derek DeBoer in third-place.

“The SRO GT4 America series gives our customers a wide variety of classes to compete in. Therefore, it is a perfect fit for our Porsche Motorsport Pyramid. We see throughout the variety of classes available, that the Porsche 718 Cayman GT4 Clubsport is a platform capable of providing championship potential from the relative novice in racing all the way to the highest caliber of driver. Our customer teams and drivers made the most of the car in GT4 this season and we wish to congratulate and thank them for being a part of the Porsche family and adding to the long history of success of Porsche in motorsports.”

Porsche will continue to run as a support series to Formula 1 for the foreseeable future. The German sports car manufacturer has extended its contract with the pinnacle of formula car motorsport for another three years. As a result, the Porsche Mobil 1 Supercup and Porsche’s national one-make cup series will run as part of the FIA Formula One World Championship™ through the 2022 race season.

The Porsche Mobil 1 Supercup has been part of the Formula 1 support program since its debut season in 1993. Famous race circuits such as the Belgian Circuit de Spa-Francorchamps, the Autódromo Nazionale Monza in Italy and Monaco’s street circuit in Monte Carlo are regular fixtures on the international one-make cup racing calendar.. All drivers compete in technically identical 485 hp Porsche 911 GT3 Cup race cars guaranteeing equal opportunity for all drivers.

The renewal of the contract means that the Porsche Mobil 1 Supercup will celebrate its 30th anniversary with Formula 1 in the year 2022. The first round of the one-make cup was contested at the 1993 Grand Prix of San Marino in Imola. In 1950, Formula 1® racing began and is now the world’s most prestigious open wheel motor racing competition, as well as the world’s most popular annual sporting series. The 2019 FIA Formula One World Championship™ runs from March to December and spans 21 races in 21 countries across five continents.

The debut of the new Porsche 911 GT3 Cup race car in 2021 will mark a new milestone in the history of Porsche Motorsport. The latest generation Cup vehicle is scheduled to be unveiled next year and fielded in the Porsche Mobil 1 Supercup and selected Carrera Cups in 2021. The world’s most widely produced GT racer is run in all of Porsche’s one-make cup series around the globe including the IMSA Porsche GT3 Cup Challenge USA and Canada, both series’ are backed by Yokohama. From 1990 up to and including 2019, Porsche produced 4,251 units of the Porsche 911 GT3 Cup at the main factory in Stuttgart and subsequently prepared the vehicles to be ready to race before shipping to customers worldwide.

“We’re proud to forge ahead with the close and long-established partnership. Formula 1 offers an exclusive setting with a unique flair. This fascination and high media importance represent an ideal overall package for our racing series.”

“In the future, the Porsche Mobil 1 Supercup will focus on eight European rounds of the FIA Formula One World Championship. Porsche’s national one-make cup series will enhance the Formula 1 support program at many other events around the world, which showcases Porsche in an attractive environment.”

“We are pleased to have extended our long-standing partnership with Porsche for a further three years. This one-make series provides some of the most spectacular racing of any series and contributes significantly to the show that’s on offer over a Grand Prix weekend. Furthermore, in the thirty years during which it has run alongside Formula 1, the Porsche Supercup has provided an excellent launch pad for many drivers who have also made their mark in international races at all levels.”