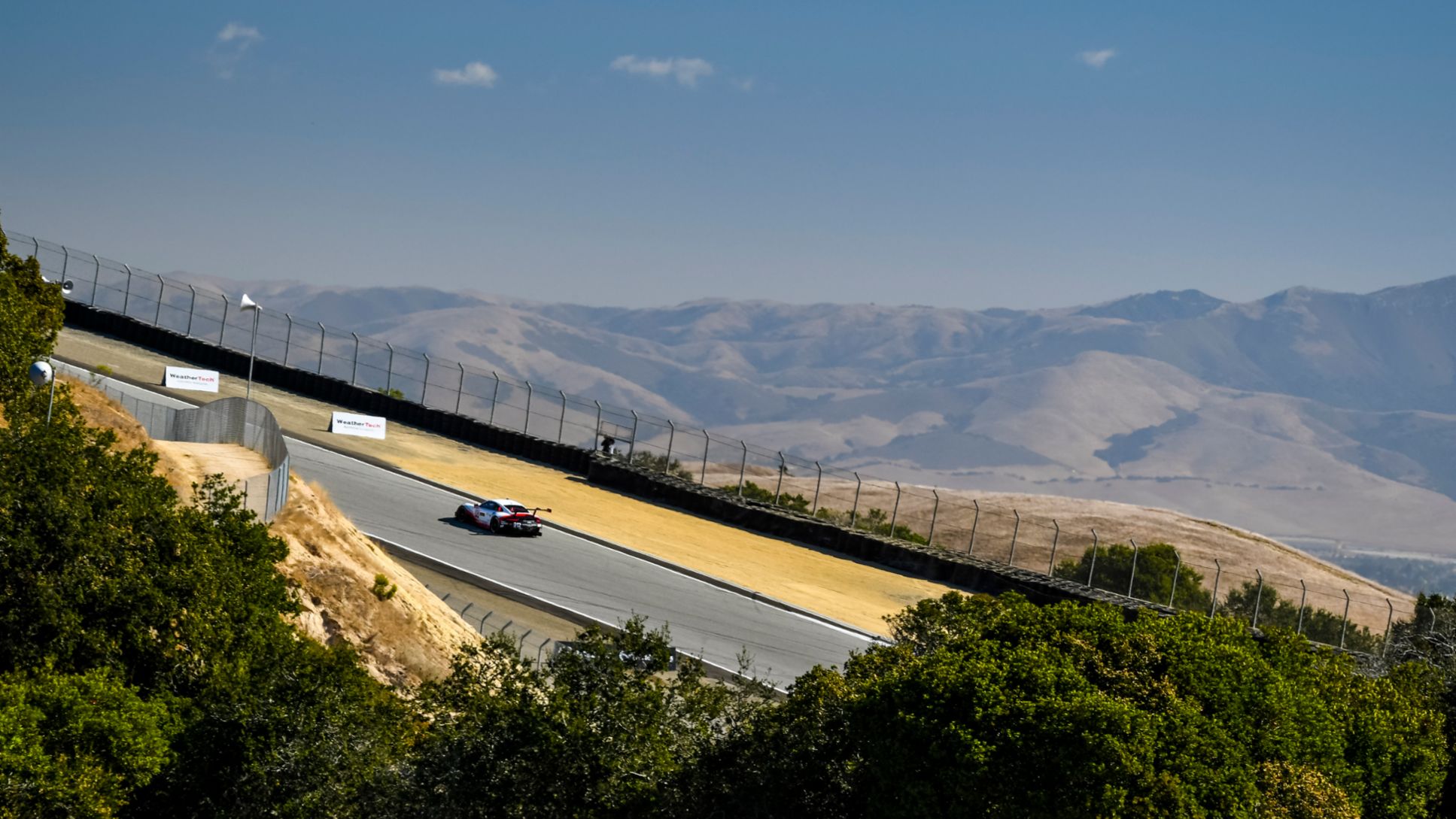 Porsche Preps for Peninsula. Porsche GT Team and Wright Ready for IMSA Round in Monterey.

Porsche Preps for Peninsula. Porsche GT Team and Wright Ready for IMSA Round in Monterey.

2020 has been a challenging year for Porsche in the IMSA WeatherTech SportsCar Championship. Entering the tenth race of the 11-event season, two Porsche factory and one customer team comes to the Monterey Peninsula in California searching to keeping driving the momentum. It took nine rounds of North America’s premier sports car racing series for the series’ 2019 GTLM class Manufacturer Champions to score a first victory in the 11-race season. That win – a record-extending 24th for a manufacturer in the Petit Le Mans at Michelin Raceway Road Atlanta – came to the No. 911 Porsche GT Team Porsche 911 RSR-19 which will be piloted by Frédéric Makowiecki (France) and Nick Tandy (Great Britain) in the Monterey Sports Car Championship on Sunday, November 1. Still looking for their first victory of the season at the two-hour, 40-minute headline event at WeatherTech Raceway Laguna Seca are 2019 Team and Driver Champions Earl Bamber (New Zealand) and Laurens Vanthoor (Belgium) in the No. 912 entry. Also in search of its first GTD class race win is the No. 16 Porsche 911 GT3 R race car prepared by Wright Motorsports for Porsche factory ace Patrick Long (Manhattan Beach, California) and Ryan Hardwick (Atlanta, Georgia).

Deep in the thick of the championship chase of the GTD class for GT3-spec machines, Wright Motorsports had its three-race podium streak come to a stop in Atlanta. The John Wright-led program finished in fourth-place narrowly missing extending the streak at Petit Le Mans. The Ohio-based operation will attempt to jump start the streak at on the 2.238-mile, 11-turn course. With 224 points, Long/Hardwick are tied for third-place in the Pro-Am style driver standings; two markers out of second-place and a narrow four-points behind the leading production-based race car of Lexus. Wright Motorsports’ one-car team is only two points out of the lead for the Team title.

"The mixed class racing will be a large factor this weekend, as will be the single racing line that the blowing sand often creates."

Porsche is 13-points behind Lexus and only four back from Acura in the GTD point standings for “Makes”. The German marque makes its only California appearance of the season in third-place of the GTLM Manufacturer standings. Corvette leads with BMW just behind.

Patrick Long, Driver, No. 16 Wright Motorsports Porsche 911 GT3 R.
"The mixed class racing will be a large factor this weekend, as will be the single racing line that the blowing sand often creates. We are in a great place as a team and my mantra is: ‘focus on the process and the results will take care of themselves’. We are enjoying our racing, pushing hard and remembering to enjoy ourselves. I am so grateful for everyone’s efforts and our partners’ support to get us this far! I'm really excited to head into these final two races with a chance for wins and a championship."

“I’ll never forget this finale. Our victory was hanging by a thread when loud noises suddenly started coming from the rear of the vehicle on the penultimate lap. It almost sounded as if small bombs were exploding." Nick Tandy

The endurance race in the Ardennes was contested under difficult conditions with changeable weather and an often slippery track. Many incidents, including rain during the night, resulted in a total of 18 full course yellows and 14 safety car phases. In the close competition among the 55-strong GT3 field from eleven manufacturers, the lead spot changed almost by the hour. The victorious Porsche 911 GT3 R from Rowe Racing swept into the lead for the first time early Sunday morning, after the 2015 outright Le Mans winner Tandy turned heads as the fastest driver in the field on a gradually drying track. Following impressive stints by Bamber and Vanthoor, it was again the Briton who took the limelight in the final hour. After tactical decisions by the seasoned customer squad, at the wheel of his ailing car, Tandy outpaced the No. 66 Audi in a gripping final sprint. He crossed the finish line with a mere 4.687-second advantage – his racing car, making alarming noises due to lack of transmission oil – would very likely not have managed another lap.

Matteo Cairoli also impressed in the final minutes of the long-distance classic. The Italian made optimal use of the Porsche 911 GT3 R’s traction advantage on the wet track and fought his way up to third-place shortly before the checkered flag on Sunday. The No. 12 racer fielded by GPX Racing with works drivers Mathieu Jaminet, Patrick Pilet, both from France, and Matt Campbell (Australia) reached the finish line in fourth-place following an equally strong charge through the field, with the No. 40 sister car finishing in eleventh-place. The maiden Spa outing for the Frikadelli Racing team with Porsche ambassador Jörg Bergmeister (Germany) as one of the driver-crew finished the grueling endurance competition in eighth-place. The KCMG customer team was plagued by bad luck in this year’s race. The No. 21 car retired early due to persistent vibrations at the rear of the Porsche 911 GT3 R racer. The sister car shared by 2019 winners Michael Christensen (Denmark), Kévin Estre (France) and Richard Lietz (Austria) lost five laps due to a wheel carrier defect and ultimately finished in 13th-place.

The three winning drivers will next compete in the penultimate round of the IMSA WeatherTech SportsCar Championship on November 1 at WeatherTech Raceway Laguna Seca in Monterey, California. Tandy joins Frédéric Makowiecki (France) in the No. 911 Porsche GT Team Porsche 911 RSR looking to add a second victory to their 2020 total having won the Petit Le Mans on October 17. Bamber/Vanthoor are still chasing their first GTLM class victory of the season in the No. 912 in Monterey.

Fritz Enzinger, Vice President Porsche Motorsport.
“To win under such difficult conditions cannot be appreciated highly enough. Plus positions three and four – what a super performance. My congratulations and huge thanks to the winning team of Rowe Racing and to all other Porsche customer teams as well as the engineers from Porsche Motorsport. They all did a tremendous job at Spa.”

Sebastian Golz, Project Manager Porsche 911 GT3 R.
“It was an extremely exciting finish – our hearts were racing at full revs. The last hours were simply nerve-wracking. Huge congratulations to Rowe Racing and the drivers who achieved the absolute maximum. On top of the overall victory, we also have one of Dinamic Motorsport’s cars on the podium and GPX Racing in fourth-place. That underlines the strong partners we have at our side when the Porsche 911 GT3 R goes racing.”

Nick Tandy, Driver, No. 98 Rowe Racing Porsche 911 GT3 R.
“I’ll never forget this finale. Our victory was hanging by a thread when loud noises suddenly started coming from the rear of the vehicle on the penultimate lap. It almost sounded as if small bombs were exploding. I got a fright and at the same time, the rear axle was sliding around on a trail of oil. What I didn’t realize was that the oil was coming from our car. I still can’t quite believe that the Porsche 911 GT3 R got us over the finish line. The relief and joy are indescribable.”

Earl Bamber, Driver, No. 98 Rowe Racing Porsche 911 GT3 R.
“It’s simply incredible. That was a real team effort. Everyone gave their utmost and never gave up. At the beginning, our chances didn’t look good but with tremendous determination we made it to the front. This victory feels just wonderful. We’ve experienced a lot of bad luck this year. The triumph at Spa helps us forget all about that. It’s a dream come true!”

Laurens Vanthoor, Driver, No. 98 Rowe Racing Porsche 911 GT3 R.
“This brings me to tears. The 2020 year for us was often difficult because luck was never on our side. At some point, I’d almost written the season off in my mind. And then of all things to win at my home race in Spa-Francorchamps. I can’t describe the emotions. First I have to let it all sink in.”

When the 2020 IMSA Porsche GT3 Cup Challenge USA by Yokohama series opened, it did so on the Streets of St. Petersburg, Florida with the plan to run two, 45-minute one-make races using the Porsche 911 GT3 Cup race car for a full field of contenders. However, after one practice session on the 1.8-mile temporary street circuit, race organizers closed the event due to concerns of the COVID-19 pandemic. Working closely with city, state and federal officials, the race was rescheduled for October 23 – 25 and GT3 Cup Challenge USA was on the Indy Car Series undercard. What was hinted at the limited first appearance in March has been proven out now at the end of October: the championship battle would be a Jeff Kingsley (Canada) and Riley Dickinson (New Braunfels, Texas) faceoff.

Each driver was armed with the same Porsche 911 GT3 Cup race car and Yokohama racing slicks; Kingsley’s No. 16 prepared by Wisconsin’s Kelly-Moss Road & Race while Dickinson looked out the windshield of the No. 58 Moorespeed-readied machine from Austin, Texas. When the sunset on the Gulf Coast weekend, Kingsley had two wins and a nearly insurmountable lead Platinum Drivers Championship. While Dickinson, the 2020 IMSA Hurley Haywood Scholarship winner, challenged for the lead and finished in second-place in both races over the weekend, the young Texan could not better the Canadian who now has ten race wins on his GT3 Cup Challenge USA resume. Kingsley will enter the two-race finale at Sebring International Raceway on November 13 with a 31-point edge on Dickinson. As result, depending on the final entry list for finale, Kingsley will only need to start the normally-aspirated flat-six engine of his green and white machine in race one to take the title.

The November Sebring-finale in Florida will not only close the 2020 IMSA GT3 Cup Challenge USA by Yokohama season, it will bring the curtain down on the series itself. In 2021, the Porsche Carrera Cup North America will take its rightful place on the top of the Porsche one-make series in the United States and Canada. The new series – the world’s tenth Carrera Cup – will utilize the yet-to-be unveiled 2021 Porsche 911 GT3 Cup race car (type 992) and compete on MICHELIN® Pilot® Sport Cup N3 racing slick. Just as the 2020 season will end on the 3.74-mile Sebring circuit, the Porsche Carrera Cup North America will get its start there in March of 2021.