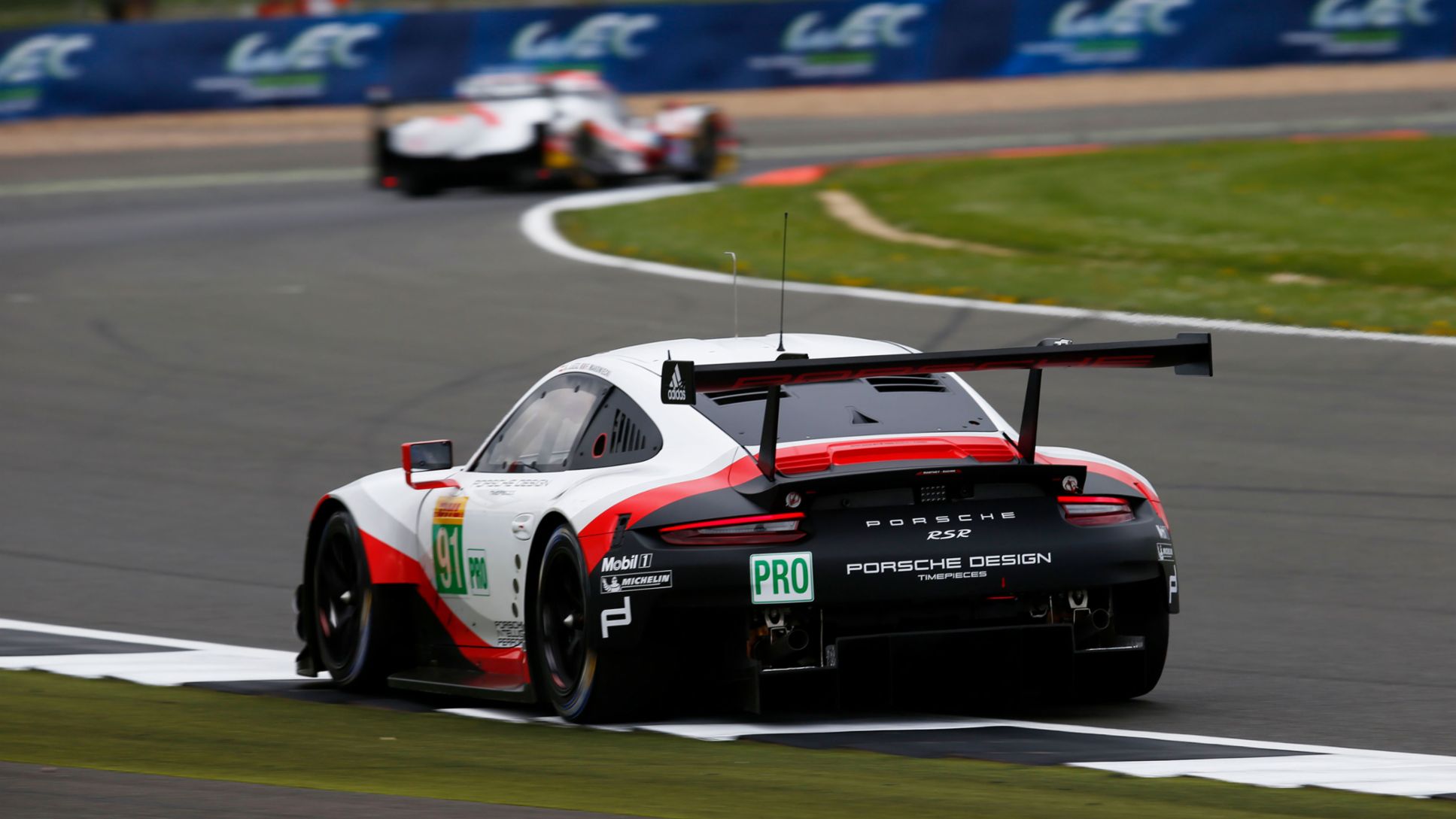 Scoring a one-two finish at round three of the FIA World Endurance Championship (WEC), Porsche has expanded its lead in the LMGTE-Pro world championship. At the wheel of the new Porsche 911 RSR, reigning world champions Kévin Estre (France) and Michael Christensen (Denmark) started the four-hour race on the Shanghai International Circuit (China) on the class pole position and secured the victory. The win was awarded after a post-race technical inspection found the car originally awarded the victory failed a ride-height check. With this result, the successful pair extended their lead in the drivers’ classification. Gianmaria Bruni (Italy) and Richard Lietz (Austria) took the checkered flag on Sunday, November 10 in their ca. 515 hp nine-eleven fielded by the Porsche GT Team in third-place but was subsequently moved to second-place behind their teammates.

The race on the outskirts of the Shanghai metropolis was gripping to the last second. The team used the full course yellow, a good hour before the end of the race, for its last pit stop. Because of the early stop, the drivers had to be particularly mindful of the fuel consumption over the remaining hour. In spite of this, Estre performed an impressive overtaking maneuver in the No. 92 Porsche factory racer. With less than an hour to go to the finish, the Frenchman swept from third to second, placing the car in position to earn the victory. Bruni, who drove the final stint in the No. 91 race car, managed to make up one position with 40 minutes left on the clock to follow his works team car across the line.

Our new 911 RSR has finished on the podium at every race so far this season. Richard Lietz, Driver

Spirited drives and a strategic effort paid off for the Porsche GT Team over 125 laps on the 3.39-miles (5.451-kilometer) circuit in Shanghai and yielded both driver crews a spot on the podium. Estre and Christensen were able to extend their lead in the drivers’ classification. After round three of the season, Bruni and Lietz are narrowly off the lead in the tight championship battle. Porsche has managed to expand its lead in the manufacturers’ classification of the FIA World Endurance Championship with the new Porsche 911 RSR (2019 model year), which is based on the high-performance 911 GT3 RS road-going sports car.

“We knew that we’d have a difficult race ahead of us. We weren’t the fastest out there at times, but we compensated for this through our teamwork. We’re thrilled to have extended our lead in the championship standings and with our perfect performance as a team this weekend.”

“We had a good race with a great strategy. Tire management was a challenge, as we had to be very careful with the tires without it costing too much time. In the final stint I was running in fourth-place and managed to overtake another vehicle. Richard also did an outstanding job at the start.”

“Our new 911 RSR has finished on the podium at every race so far this season. We’re becoming more and more familiar with the car. We still need to perfect the setup.”

“It was a very good race for us, even though we weren’t the fastest on the track today. Still, everyone in the team did a good job. Now I’m looking forward to Bahrain.”

“Once again our strategy was great. We couldn’t do better than that. We still have a few things to work on, but we’re very happy with this result.”

Two Porsche customer teams entered IMSA’s Michelin SportsCar Encore at Sebring for a two-day after party to close the sanctioning body’s 50th anniversary. While neither was a full-season entrant in the IMSA WeatherTech SportsCar Championship’s GTD class, both Wright Motorsports and Black Swan Racing brought Porsche 911 GT3 R race cars to Sebring International Raceway on November 9 – 10 to add seat time for drivers and the two teams themselves. After four hours of racing, the top four GT3 cars finished in a nose-to-tail line on the famous Florida track with Wright Motorsports finishing in second-place just ahead of the Black Swan entry.

Victory in the four-hour event resulted from pit strategy that allowed the class-winning Mercedes AMG just enough of an edge to fend-off the pressure from the rear-engine Porsche machines. The No. 16 Wright Motorsports Porsche 911 GT3 R with drivers Ryan Hardwick (Atlanta, Georgia), Max Root (San Diego, California) and Jan Heylen (Clearwater, Florida) finished on the second-step of the Encore GT3 class podium. Timothy Pappas (Boston, Massachusetts) made his return to the cockpit after an accident at the 12 Hours of Bathurst in February with co-drivers Marc Miller (Grand Rapids, Michigan) and Spencer Pumpelly (Atlanta, Georgia). The trio raced the No. 54 Black Swan Porsche to a third-place finish.

While the race itself offered no points, and the factory teams of the GTLM class and DPi entries were not allowed, the race provided both Wright and Black Swan the opportunity to give new drivers and combinations time to experience the 500 horsepower Porsche GT3-spec contender. Among those using the post-season race as a platform to learn was 2018 Hurley Haywood Scholarship recipient, Max Root. The weekend was Root’s first opportunity to race the international GT3-spec Porsche in competition. The Californian, a graduate of the 2018 Porsche Young Driver Academy, is a three-time race winner in the IMSA Porsche GT3 Cup Challenge USA by Yokohama championship with Wright Motorsports.

It was a no brainer to go with the Porsche. It’s the best car and the best manufacturer. Max Root, Driver, No. 16 Wright Motorsports Porsche 911 GT3 R.

On November 13, the Pikes Peak International Hill Climb (PPIHC) will officially open requests for entry in the Porsche Pikes Peak Trophy by Yokohama division of the 98th Running of the Broadmoor Pikes Peak International Hill Climb, brought to you by Gran Turismo. The internationally renowned Colorado hill climb – North America’s second-oldest motorsport event – is scheduled to take place June 28. For the third consecutive year, Porsche Motorsport North America (PMNA) will manage the division, which continues to see exclusive use of the German marque’s mid-engine race car in the “Race to the Clouds”. For the first time at this event, only the current generation Porsche 718 Cayman GT4 Clubsport (model years 2019 and 2020) will be allowed to compete, ensuring ongoing parity within the division. Entry submissions will close on January 3, 2020.

As in the two previous years of the Porsche Pikes Peak Trophy, entrants will enjoy full support of PMNA and Yokohama. All cars within the division will utilize Yokohama’s ADVAN A052 high-performance, street legal tires. Yokohama is a longtime partner of PMNA and has supported the Porsche Pikes Peak Trophy in its first two years at “America’s Mountain”. The Japanese tire manufacturer is also the sole-supplier to both the IMSA Porsche GT3 Cup Challenge USA and Canada one-make series as well as the Porsche Trophy West USA.

Everyone is eager to see what the new Porsche 718s can do this year. Megan Leatham

Travis Pastrana, three-time AMA Motocross and Supercross Champion, X-Game winner and stunt performer, holds the current record for the division with a time of 10-minute, 33.897-second lap up to the 14,115-foot-high finish line in 2018. He also won the event in 2019 with a slower 11:24.287 time set in varying and less desirable conditions.

Porsche legend Jeff Zwart will reprise his role as coach for each driver in the Porsche Pikes Peak Trophy division. The Long Beach, California-native is renowned for his prowess on the rally scene, particularly his mastery of the legendary Pikes Peak International Hill Climb where he has won eight times (1994-’98, 2002, 2010, 2015), all in Porsche 911 models.

The German sports car maker first appeared at Pikes Peak in 1958. Porsche won its class for the first time in 1961 and has since left its mark on the Colorado mountain capturing 27 class victories and twice turning the quickest time for the overall win.

“In a very short period of time, only two years, the Porsche Pikes Peak Trophy by Yokohama has become a key event for Porsche. It blends well into the heritage of the event and our company’s successful history at Pikes Peak. Our relationships with the PPIHC and Yokohama as well as Jeff Zwart have proven an excellent way to highlight the versatility of the Porsche 718 Cayman GT4 Clubsport. This is the earliest we have opened invitations to participate in the division so we are expecting an excellent lineup in June.”

“We are pleased to welcome Porsche Motorsport North America and Yokohama back to Pikes Peak – America’s Mountain for the 98th Running. The excitement this division brings to our event has drawn more fans each year. Everyone is eager to see what the new Porsche 718s can do this year.” 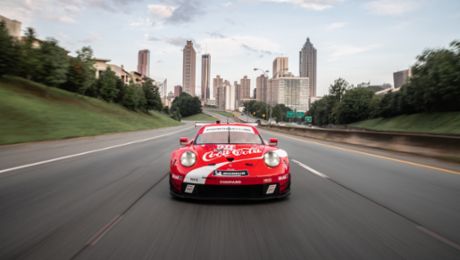 Coke® Is It! Porsche to Run Hometown Retro Livery at Petit Le Mans 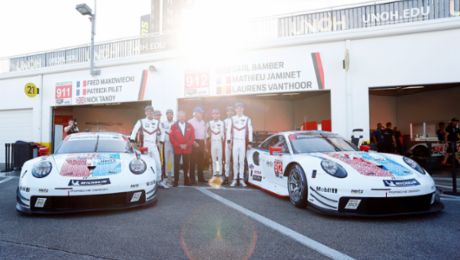