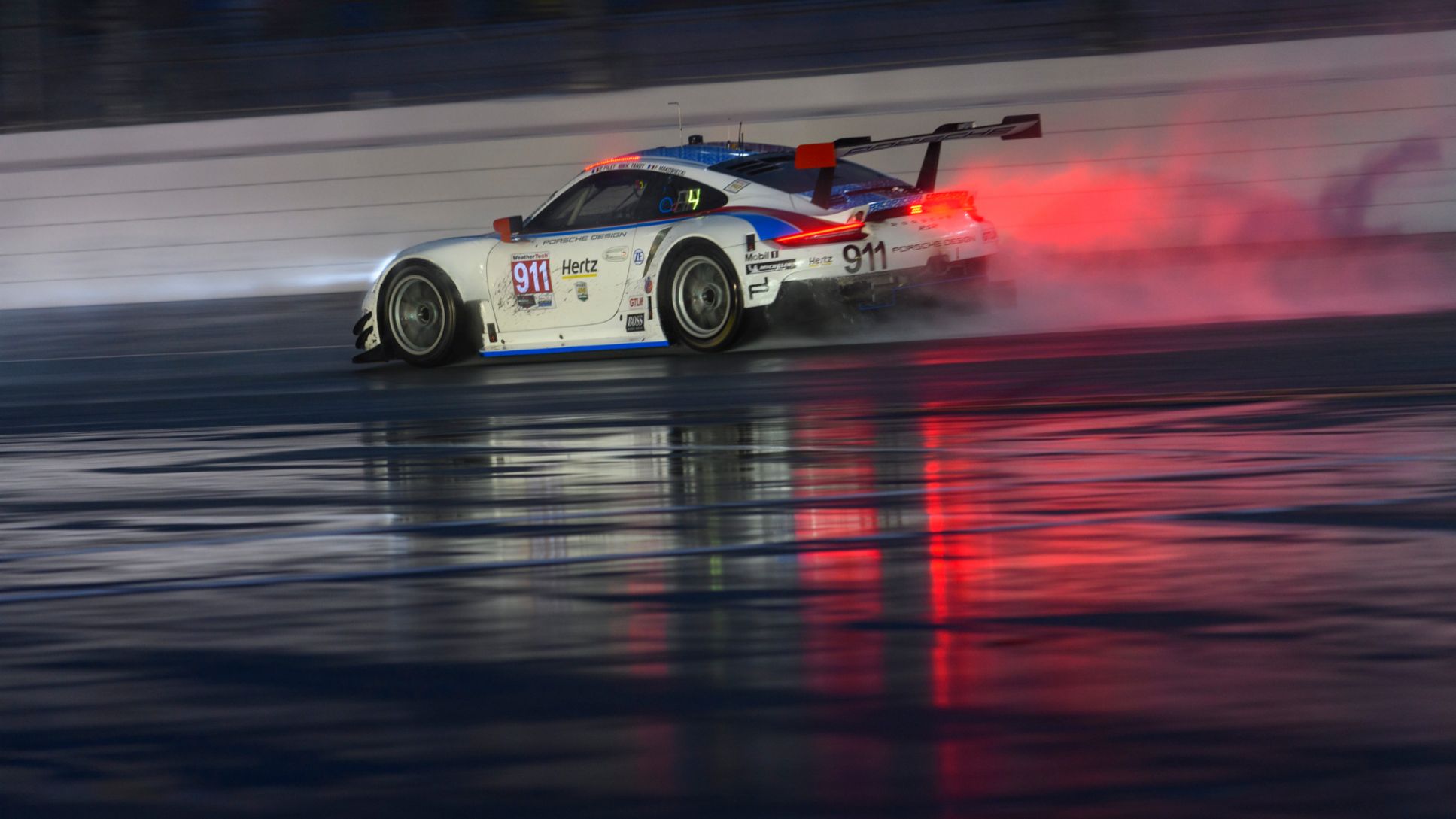 Porsche Profile.
Event Story Lines.
Porsche Wet Mode. Factory 911 RSR Earns Wet Rolex 24 Podium.
A strong performance by the Porsche GT Team was rewarded with a place on the Rolex 24 At Daytona GTLM class podium. Under a relentless soaking rain that resulted in a record two red flag periods – one of which ended the 57th running of the classic race at the Daytona International Speedway in Florida – the two Porsche 911 RSR racers finished in third- and fifth-place at the IMSA WeatherTech SportsCar Championship season opener. The new Porsche 911 GT3 R – making its official North American competition debut this weekend – achieved a customer-team best of eighth-place for Park Place Motorsports in the Pro-Am style GTD class.

The 510 hp Porsche 911 RSR race cars were strong in the first half of the 24-hour race. However, the heavy rain, numerous caution periods, interruptions and incidents threw the two factory cars in the legendary Brumos Racing-derived retro livery into a rainy game of chance in the final hours. Conditions and similar incidents slowed the 500 hp Porsche 911 GT3 R keeping the car from a podium result despite having run in the top-three much of the race contested on the 3.56-mile track.

Heading into the race on Saturday afternoon in dry conditions, Nick Tandy (Great Britain) made perfect use of his pole position, with the No. 911 Porsche 911 RSR holding the lead for multiple laps. His French teammates Patrick Pilet and Frédéric Makowiecki retained the top spot into the night. Torrential rain early on Sunday morning proved to be a watershed moment in a perfect race. With deep water on the track, the pole-sitting 911 fell back into fifth-place with little green flag running to make it back to the front of the field.

The sister car shared by Earl Bamber (New Zealand), Laurens Vanthoor (Belgium) and Mathieu Jaminet (France) experienced bad luck early on in the race. The repairs to a defect in the front splitter mounting threw the trio in the No. 912 Porsche 911 RSR back by four laps. Thanks to a flawless drive and perfect strategy, the gap was quickly closed so that both factory cars were back among the frontrunners. The No. 912 was relegated to fourth-place in arguably the worst conditions in the 57-year history of the endurance classic, but was classified in third-place by IMSA officials when a penalty was handed to a competitor when the race was finally stopped after 23-hours and 50-minutes.

In the GTD class, the new Porsche 911 GT3 R run by the Park Place achieved a Porsche-high eighth-place result. After several setbacks, works driver Patrick Long (Manhattan Beach, California), Porsche Young Professional Matt Campbell (Australia) as well as driver/owner Patrick Lindsey (Santa Barbara, California) and Nicholas Boulle (Dallas, Texas) repeatedly fought their way up the order. Over long stretches, the team from Texas and its experienced drivers underlined the immense potential of the new GT3-spec car and led the race in the final stages. However, the red flag immediately after a pit stop foiled the tactics and thus the chance of a victory.

Bad luck also plagued the customer teams of Black Swan Racing and Pfaff Motorsports in the GTD class with accidents throwing their respective Porsche into retirement. The squads from the USA and Canada managed to match the pace of the leaders and were at times on course for a podium spot. A technical defect threw the Porsche 911 GT3 R fielded by NGT Motorsport out of contention early in the race.

Round two of the IMSA WeatherTech SportsCar Championship will also be held in Florida. On March 16, the remaining hours of the “Florida 36”, the Mobil 1 Twelve Hours of Sebring will be contested as a doubleheader with the FIA World Endurance Championship (WEC). The Porsche “works” cars will continue to carry the popular “throwback” livery of Florida-based Brumos Racing in the 67th running of the 12 Hours of Sebring.

Pascal Zurlinden, Director GT Factory Motorsport, Porsche.
“If you ignore the weather, then you have to admit that was a great race. We witnessed some top-class battles from all manufacturers. It was a great show for the fans. We were really strong in dry conditions, in the wet, however, things didn’t really go as we’d hoped. The result might look a little disappointing at first glance, but the potential shown and the perfect teamwork make me very optimistic.”

Steffen Höllwarth, Program Manager,  IMSA WeatherTech SportsCar Championship, Porsche.
“That was a gripping race, from which we’re very happy to take home a podium result. We led the field over long stretches, we coped impressively with a setback for our No. 912 car and we regained lost time. There were many highs and lows. We were very fast in the dry with a setup designed for high top speeds on the straights, but unfortunately not quite so in the wet. To achieve a podium result under such difficult conditions is a great effort. Now we’re looking ahead with optimism to the next race in Sebring. We are keen to repeat our victory there from last year.”

Patrick Pilet, Driver, No. 911 Porsche GT Team Porsche 911 RSR.
“I’m very disappointed because we were really strong in the practice sessions and the first half of the race. We couldn’t quite maintain the performance in the rain. A collision cost us two laps in the race, but that wasn’t the decisive factor. I’m focusing on the positive aspects. Our car was extremely fast on a dry track. Our team and the driver trio are strong. So I’m heading to the upcoming race in Sebring feeling optimistic.”

Nick Tandy, Driver, No. 911 Porsche GT Team Porsche 911 RSR.
“The first hours were great fun. Our car was fast and reliable, I enjoyed thrilling duels against drivers of other brands. But then torrential rain came. Having to drive at Daytona in such conditions is a very different experience. But we can’t complain. It could have been much worse.”

Frédéric Makowiecki, Driver, No. 911 Porsche GT Team Porsche 911 RSR.
“I think we can be very proud of our performance this weekend. In the practice and qualifying sessions we were at the front, and in dry conditions we led the race over long periods. Unfortunately, that changed completely once the rain set in. We experienced serious aquaplaning and therefore couldn’t quite maintain the pace. At the end of the day I’m left with many positive impressions.”

Earl Bamber, Driver, No. 912 Porsche GT Team Porsche 911 RSR.
“What a crazy race. We were extremely fast, we coped impressively with a bitter setback and we had a car to beat in dry conditions. The situation was different in the rain. We were no longer the fastest out there. All in all, we’ve started the season well with a podium result.”

Laurens Vanthoor, Driver, No. 912 Porsche GT Team Porsche 911 RSR.
“Everything was going fine until late at night. We’d set up our car for a high top speed and this worked perfectly in the dry, but we lacked downforce in the wet. I enjoy big challenges and I’m a fan of old-school racing, but these conditions were just crazy. When you’re driving at 290 kilometers per hour [182 mph] and you can only see two meters [6.56 ft] in front of you and you’re flying blind with 30 other cars on your tail all going the same speed, well, that just goes too far. I don’t ever want to experience something like this again.”

Mathieu Jaminet, Driver, No. 912 Porsche GT Team Porsche 911 RSR.
“Had it stayed dry, we would definitely have been able to fight for victory. Unfortunately, we lacked a bit of speed in the wet. Third-place was certainly the most we could do under these conditions. We can be proud of our performance and result. We’ve earned many points to start the season and are on the podium.”

Dennis Olsen, Driver, No. 9 Pfaff Motorsports Porsche 911 GT3 R
“It’s such a shame. We never let ourselves become disheartened by the setbacks, instead we fought back time and again. We were on course for a podium finish, but then everything went wrong. First a minor problem with the electrics hampered us, then came the crash. At the restart, my teammate couldn’t see a thing and was unable to avoid a collision with another car. Unfortunately, the damage to the vehicle was too extensive. I’m certain that Pfaff Motorsports will soon earn the reward they deserve.”

Patrick Long, Driver, No. 73 Park Place Motorsports Porsche 911 GT3 R. “Sometimes the right timing is everything in motorsport. Unfortunately this didn’t work for us today. This wasn’t because of the team’s performance, the interruptions due to the heavy rain cost us a better result. Still, we’ve earned some decent points. The season is still very long, and every point counts. The new Porsche 911 GT3 R is fast. That makes me confident for the upcoming races.”

Dirk Werner, Driver, No. 540 Black Swan Racing Porsche 911 GT3 R.
“Retiring from a race is always disappointing, but that’s racing sometimes. We didn’t just experience changeable weather, we also had many ups and downs as a team. We were one lap down several times, but again and again we fought our way back into the top group. When a rival hit the rear of our car in heavy rain this morning the car was beyond repair – it’s a great pity.”

Golden Porsche. Revered Porsche 917 Celebrates 50th Anniversary.
It’s a jubilee celebration for one of the most powerful models in Porsche history: the iconic 917 race car. The 1960s – 1970s prototype, one of the best-known race cars of all time, was presented to the public first at the 1969 Geneva Motor Show. Just one year later, Porsche brought home the first of a total of 19 victories at the 24 Hours of Le Mans.

The Porsche Museum will have ten 917 models on display from May 14 to September 15. The “Colors of Speed – 50 Years of the 917” will be one of the largest special exhibitions held at the museum. The display will give visitors the chance to see the breakthrough prototype. Among the special cars on display is the first Porsche 917 built – chassis number 001. The Porsche Museum workshop team has been working for the past several years to restore 917-001 to its original 1969 world premiere condition.