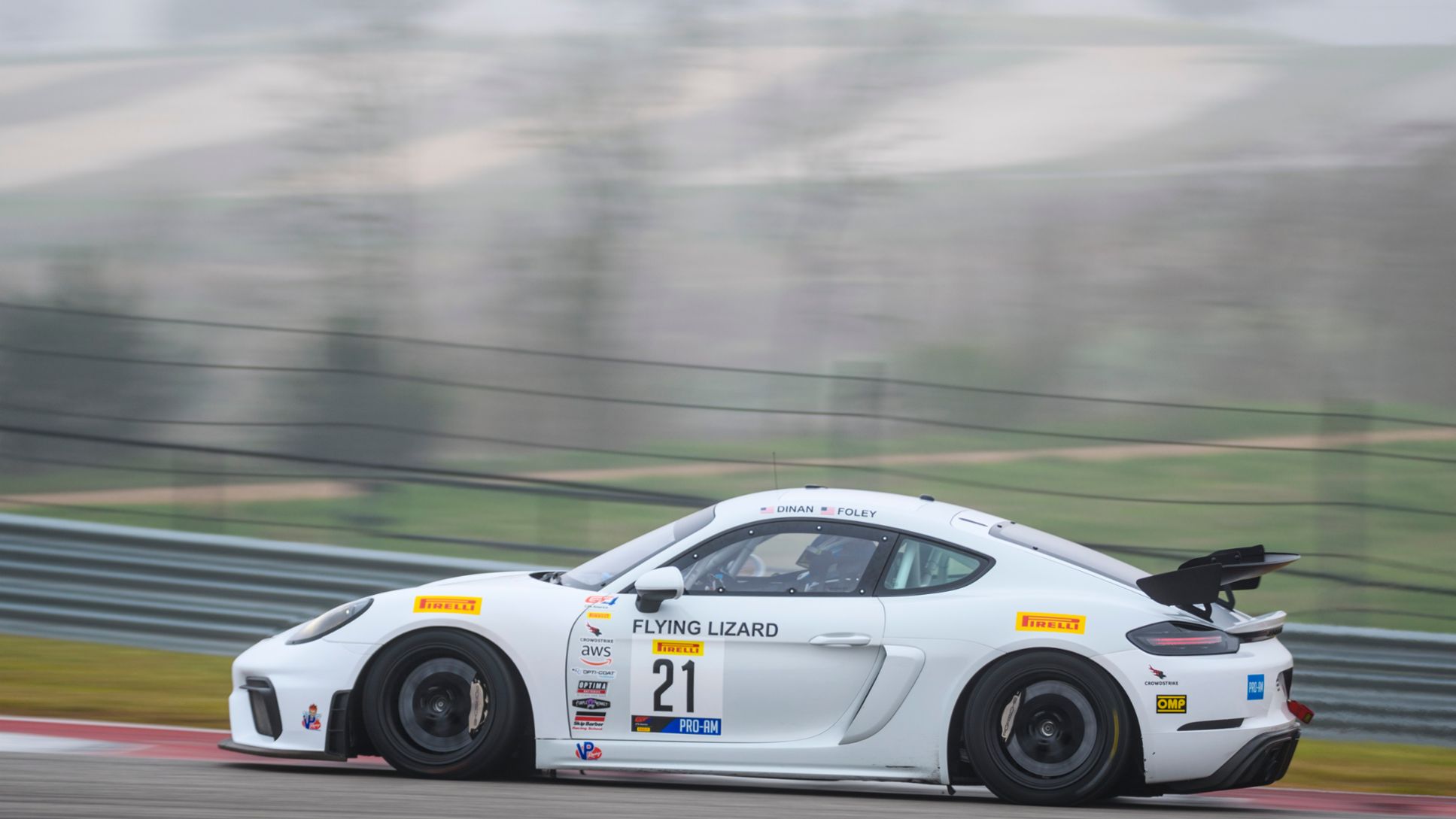 The first full season under direct SRO management has seen the GT3 class make a significant jump in total number of entries and the seven new 911 GT3 Rs account for one of the largest group of customer Porsche race cars in class history.

The entry list for the GT races is packed with names familiar to Porsche fans including the return of Wright Motorsports with Patrick Long (Manhattan Beach, California) and Scott Hargrove (Canada) in the No. 58 Porsche Consulting 911 GT3 R. The team has multiple World Challenge America championships with Porsche factory driver Long holding two overall titles (2013 and 2017) and Hargrove, a Porsche Selected Driver, earning the Sprint Championship in 2018. The Ohio-based operation also brings Anthony Imperato (Brooklyn, New York) up from its Porsche feeder programs for the SprintX season. Porsche Young Professional Dennis Olsen (Norway) will join Imperato in the No. 91 Henry Repeating Arms 911 GT3 R in the Pro/Am class.

Alegra Motorsports doubles its entries in 2019 with a fresh driver line-up. The Tampa, Florida-based operation fields two Pro-class 911 GT3 Rs with the No. 22 shared by fellow 2017 Rolex 24 At Daytona class winners Michael De Quesada (Tampa, Florida) and Daniel Morad (Canada). Both are Porsche Young Driver Academy graduates. Piloting the No. 24 are veterans of the Porsche works program, Germans Wolf Henzler and Marco Holzer.

Patrick Long , Driver, No. 58 Porsche Consulting Porsche 911 GT3 R.
“I’m excited to kick off the season and to be back in SRO America. The objective for us remains the same; to go out and try to win the championship as we did in 2017. It’s great to see a full, stacked grid with a mix of drivers I’ve race hard against and drivers who I haven’t shared the track with before. COTA is a track that has evolved a lot over the last couple of years, so the challenge of bumps and varied grip on the surface is something all of the team’s will share.”

The four-year relationship dates back to 2016, when Porsche Consulting joined forces with Wright Motorsports to support Long’s mid-season shift to the Ohio-based team’s SRO America campaign. Since then, Porsche Consulting has played an integral role in supporting the team’s No. 58 entry throughout its success across multiple platforms.

Founded in 1994, Porsche Consulting is a management consultancy developed in response to the successful restructuring of the Porsche sports car maker. As a wholly-owned subsidiary of Porsche AG, Porsche Consulting advises other organizations how to excel not only in the automotive industry, but also in many other areas, including aerospace and industrial goods.

Daniel Armbruster, President and CEO of Porsche Motorsport North America.
“I am proud to see Porsche Consulting return to the Wright Motorsports 911 GT3 R as the team rejoins the Blancpain GT World Challenge America racing series. As we continue to expand and define our Porsche pyramid system of race cars and drivers, the partnership with Porsche Consulting has only gotten stronger. Mutually beneficial relationships like these highlight the advantages of racing with Porsche.”

Norman Firchau, President and CEO, Porsche Consulting, Inc.
“All of us at Porsche Consulting couldn’t be happier entering our fourth year as a partner of the championship-winning Wright Motorsports 911 GT3 R. Our involvement with Wright Motorsports comes by way of Porsche Motorsport North America and includes growing collaborations between the two Porsche entities. Competition is such an integral part of who Porsche is as a brand, it is only natural that we support our own, on the racetrack and off.”

The new 718 Cayman GT4 Clubsport MR is the latest development of the successful mid-engine sports car from the German-marque. In developing the new 718 Cayman GT4 Clubsport, the focus was put not only on improved drivability and faster lap times but also on the sustainable use of raw materials. The 718 Cayman GT4 Clubsport is the first production race car to feature body parts made of natural-fiber composite material. The driver and co-driver doors and the rear wing are made of an organic fiber mix, sourced primarily from agricultural by-products such as flax or hemp fibers and feature similar properties to carbon fiber in terms of weight and stiffness.

Powering the 718 GT4 Clubsport is a 3.8-liter flat-six engine producing 425 hp (313 kW), a 40 horsepower increase when compared to its successful predecessor. The power is transferred to the rear wheels via the Porsche PDK dual-clutch gearbox with six gears and mechanical rear axle differential lock.

IROC 911. 45 Years Ago, Porsche Was the Car of Choice for the First Made-For-TV Racing Series.
It was 45 years ago when the first “made-for-TV” race series pitted the world’s most famous and successful race car drivers from around the globe against one-another in the aptly named International Race of Champions (IROC). With champion drivers coming from sports car racing, Indy car racing, Formula One and NASCAR, the only common element in the inaugural season was the identically matched 1974 Porsche 911 RSR race cars they each drove. The first year was unique in that it was the only time the 911 would be used in the one-make competition. Perhaps, looking back, it was inevitable that Mark Donohue, the man with a panache for road racing and Porsche, would be crowned the inaugural champion with a victory in the season-closing race at Daytona International Speedway, 45-years ago this month – February 14, 1974.

The brainchild of Roger Penske, Les Richter and Mike Phelps, IROC was planned as a four-race season crossing over the winter months between 1973 and 1974. The series would offer “must-see racing TV” with tape-delayed broadcasts on ABC offering fans much needed motorsports content when all the major series were in their off-seasons. Targeting tracks in warmer-climates, the first three rounds came at Riverside International Raceway in California on October 27 – 28. Those races were split between former Penske Racing Porsche 917-10 drivers Donohue and George Follmer, the two drivers that would contend for the title as inaugural IROC Champion until the finale at Daytona on Valentine’s Day the following year.

Race One saw Formula One World Champion and future two-time Indianapolis 500 winner Emerson Fittipaldi win the pole position but, by virtue of missing the required drivers’ meeting, the Brazilian and Follmer were each placed at the back of the field. That set the stage as Donohue earned the debut victory leading from green flag to checkered as Follmer would put on a clinic passing some of the best drivers of the time to finish in fourth-place. Race Two, also held at Riverside, saw Follmer close the gap to Donohue by cutting through the pack to take the win from a ninth-place grid position. Donohue fell out of the race early, the only IROC race the 1972 Indianapolis 500 winner did not win. Race 3 was much like the races from earlier in the weekend with Donohue earning the top-step of the podium from the pole position and Follmer chasing his former teammate up to fifth-place from 12th.

The finale was held on the Daytona road course in February with only six-drivers – early IROC rules called for the field to be cut in half entering the final round. The backdrop and the smaller field were the only things that changed from the early rounds in California. Follmer would chase Donohue for the race win and the title until spinning his Porsche. That left the New Jersey-native to take the race win and the inaugural IROC title, accumulating $54,000 in prize money. The championship standings were based on prize money earned in the four races. That led to Formula One star Peter Revson finishing second with $21,200 in earnings, Indy car legend Bobby Unser would take third-place ($19,100) with NASCAR’s second in all-time wins David Pearson banking $14,600 for fourth-place. Despite contending for every win and pushing Donohue to the title, Follmer had amassed only $16,000 good for fifth-place just ahead of soon-to-be four-time Indianapolis 500 winner A.J. Foyt.

Working closely with longtime racing partner, Penske Racing, and leaning on the vision of Roger Penske himself, Porsche built fifteen custom 911 Carrera RSR in Weissach, Germany specifically and solely for the first IROC season. That number of cars, each painted a unique color ranging from basic black to pastel blue, offered one machine each for competition for the 12 invited drivers with three spares in case of incident. While using the 1973 Carrera RS, Porsche blended elements of the upcoming 1974 car and other performance features to provide the world’s best drivers with an equally premier race platform. Among the features that would make the cars more race-ready as well as among the elite of collectors cars today were the “whale tail” rear wing – replacing the “duck tail” design – wider fenders and bumpers which allowed for the use of wider Fuchs alloy wheels as well as safety features. A new for 1974 3.0-liter flat-six engine powered the car, offering drivers 315 HP with an estimated 5.5-second, 0-60 mph time and a top speed approaching 180 mph. Other features remained largely road car stock including the five-speed gearbox and interior features straight from the assembly line in Zuffenhausen.

The first season was the only one in which the Porsche 911 Carrera RSR was used. Cost, complexity and a move to a mix of ovals and road courses – and eventually ovals only – would necessitate series’ organizers switch away from the German marque. IROC would run with more NASCAR style stock cars until being shuttered in 2006. In 30 years, Chevrolet Camaros, Dodge Daytonas and Avengers and ultimately Pontiac Trans Ams were all used to pit the world’s greatest drivers against one-another but no IROC car has become more collectible or precious than the original 15 bespoke Porsche 911 Carrera RSRs of that first season. Several drivers with close ties to Porsche were the ‘Champion of Champions’ including Donohue (1973/’74), Foyt (1976, 77), Mario Andretti (1979) and Al Unser Jr. (1986, 1988).