Porsche Profile.
Event Story Lines.
Night of Champions. 2019 Porsche Motorsport News Announced at Annual Celebration.
Porsche paid tribute to the worldwide achievements of its teams and drivers over the 2018 season at its Night of Champions motorsport gala in Weissach, Germany. At the December 8 celebration, the Board announced the continuation of its worldwide GT activities at the same accelerated rate as in 2018, as well as made several other confirmations for the upcoming season, the 71st year of motorsport competition for the iconic German brand.

IMSA Effort. Porsche Works Program Continues in WeatherTech GTLM.
Porsche will again tackle the IMSA WeatherTech SportsCar Championship with two 911 RSR in 2019. The collaboration with CORE autosport, which began with a victory in the Rolex 24 At Daytona in 2014, has been extended for an additional three years. As in 2018, Nick Tandy (Great Britain) and Patrick Pilet (France) will share the cockpit of the No. 911 Porsche GT Team Porsche 911 RSR for the full IMSA GTLM season. Frédéric Makowiecki (France) will join them at the endurance races of the Rolex 24 at Daytona, Mobil 1 Twelve Hours of Sebring, Six Hours of the Glen (Watkins Glen) and ten-hour Petit Le Mans at Road Atlanta. The No. 912 sister car will be manned by the returning crew of Earl Bamber (New Zealand) and Laurens Vanthoor (Belgium). The No. 912 will have the backing of Frenchman Mathieu Jaminet at the endurance classics.

The North American arm of the Porsche GT Team, based in Rock Hill, South Carolina, has 12 GTLM class victories since 2014 and the overall title at the 2015 Petit Le Mans. In 2018, the No. 911 earned class wins at Sebring and Petit Le Mans while the No. 912 took the GTLM victory at the Mid-Ohio Sports Car Course.

Fully Committed. Four Factory Porsche 911 RSR Programs to Race at Le Mans.
Porsche will field four factory entries in the 87th running of the 24 Hours of Le Mans. The Porsche GT Teams from the IMSA WeatherTech SportsCar Championship and the FIA World Endurance Championship (WEC) will each campaign a pair of Porsche 911 RSR at the endurance classic, June 15 – 16, 2019. Porsche finished one-two in the LMGTE-Pro class of the 2018 race as well as captured the LMGTE-Am category extending the German marque’s record for Le Mans manufacturer class victories to 107.

Gianmaria Bruni (Italy), Richard Lietz (Austria) and Frédéric Makowiecki (France) will share the cockpit of the No. 91 car. Title defenders Kévin Estre (France), Michael Christensen (Denmark) and Laurens Vanthoor (Belgium) will helm the No. 92. Patrick Pilet (France), Nick Tandy (Great Britain) and Earl Bamber (New Zealand) are entered in the number 93 car. Sharing driving duties in the 911 RSR with the starting number 94 are Sven Müller (Germany), Mathieu Jaminet (France) and Dennis Olsen (Norway). The Nos. 91 and 92 are full-season contenders in the WEC while the Porsche GT Team, which regularly contests the WeatherTech Championship, will field the 93 and 94 entries.

Lindsey and Long previously ran together in 2013 under the then newly formed Park Place Motorsports banner in the Grand-Am Rolex GT series. The duo scored multiple top-five and three, second-place finishes resulting in a fifth-place spot in the final championship standings.

Patrick Lindsey, Team Principal/Driver, No. 73 Park Place Motorsports Porsche 911 GT3 R.
“I’m extremely excited for our team this year. We’re growing as a team, and we have the full support of Porsche Motorsport North America to chase a championship. We’re pursuing a lot this year. We’re running two cars with the new 911 GT3 R in WeatherTech and the Cayman GT4 Clubsport in the Michelin Pilot Challenge. We’re hoping to run Porsche GT3 Cup Challenge USA for the second year as well. I do believe that we’ve never been in a better position to make the leaps we will make this year and to do them with great success. Maybe we won’t make them without setbacks or issues, but we will have success this year. Everyone on the team feels that.”

Patrick Long, Driver, No. 73 Park Place Motorsports Porsche 911 GT3 R.
“Park Place is a great team and I enjoy working with them. They’re a group of very determined people with tremendous talent. We had some memorable moments when we last raced together, but I’m hoping we can build on those accomplishments this coming year. They’ve made great changes and additions during the offseason to the team which I’m sure will pay off during the season. I’m happy to be back with Patrick; he’s a great a teammate. Hopefully, we can make some magic happen this year.”

Porsche Aces. Factory Driver List Features Continuity.
Porsche announced that its focus would be on continuity as it relates to its factory driver squad for 2019. All factory drivers who were part of the “works” team in 2018 remain under contract in the new year. The same applies to all Porsche Young Professionals. A total of 24 drivers comprise the 2019 Porsche Factory Driver/Young Professionals/Junior team.

The only newcomer to the team is the Porsche Junior Jaxon Evans. The 22-year-old New Zealander is the reigning champion of the Porsche Carrera Cup Australia and came out on top at a shootout against ten other talented youngsters from international one-make cup series. The list included 2018 IMSA Porsche GT3 Cup Challenge USA by Yokohama Champion Trenton Estep.

The Porsche 718 Cayman GT4 Clubsport is the first production race car with body parts that are sustainably manufactured. The front hood, doors and rear wing are made of natural-fiber composite materials. Other unique features of the GT4-spec racer will be announced on-site during the unveiling. Three weeks after its launch, the new “clubsport” racer will make its competition debut during the four-hour Michelin Pilot Challenge season-opener in Daytona, Florida.

The Cayman GT4 rounds off the “clubsport” family of Porsche Motorsport. Other cars under the banner include the 911 GT2 RS Clubsport and 935 models – both announced within the last three months in North America.

Beyond the WeatherTech GTD class, the new 911 GT3 R will also compete on North American soil in the Blancpain GT World Challenge America.

Also in 2019, strong three-man crews will contest all rounds of the Intercontinental GT Challenge and the Blancpain GT Series Endurance Cup with Romain Dumas (France), Sven Müller (Germany) and Mathieu Jaminet (France) in one car. Dirk Werner (Germany), Dennis Olsen (Norway) and Matt Campbell (Australia) will be regular contestants in a second Porsche 911 GT3 R. As in the GT Word Challenge America, Porsche will also support at least two vehicles run by customer squads in the pro-category of the ADAC GT Masters. Customer support will also be given at a number of national series and selected events.

Into the Ring. Project Title Defense at the Nürburgring.
The winning Manthey-Racing team aims to defend its title at the 24 Hours of Nürburgring in 2019. Backed by the factory for this campaign, the squad from Meuspath, Germany, will undertake the race with two new Porsche 911 GT3 R. The winning quartet of 2018 remains unchanged with Richard Lietz (Austria), Frédéric Makowiecki (France), Patrick Pilet (France) and Nick Tandy (Great Britain) sharing the cockpit of the rear-engine GT3-spec car. In the sister vehicle, Earl Bamber (New Zealand) joins forces with the Le Mans-winning trio of Michael Christensen (Denmark), Kévin Estre (France) and Laurens Vanthoor (Belgium). Porsche will assist a number of customer teams with drivers as well as provide technical and strategic support.

New Head. Enzinger Takes on Top Role at Porsche Motorsport
Effective January 1, 2019, Fritz Enzinger assumes overall management of Porsche Motorsport. In addition to established worldwide GT racing programs already underway, the department will also include Formula E in the upcoming season. Until now, Enzinger has been responsible for the management of the Porsche 919 Hybrid LMP1 project. In addition, he took on the role of head of Group Motorsports in February 2018. The former Vice President of Motorsport, Dr. Frank-Steffen Walliser, who has held this position since 2014, will move into the department of the CEO, where he will be responsible for the 718 and 911 sports car road model lines.

In addition to the Porsche Cup itself, Ried takes home a Porsche road car valued at more than $136,000 USD (120,000 Euro). Thanks to his successes in the FIA World Endurance Championship (WEC) and the European Le Mans Series (ELMS), he earned 10,348 points over the past season at the wheel of the Porsche 911 RSR. 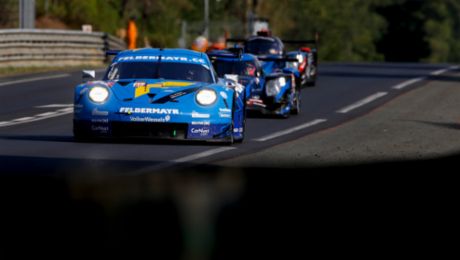 This weekend six Porsche customer race teams will ring the new year back into life with the sound of normally aspirated flat-six race engines in Daytona Beach, Florida to ready for the Rolex 24 At Daytona endurance race the following weekend. 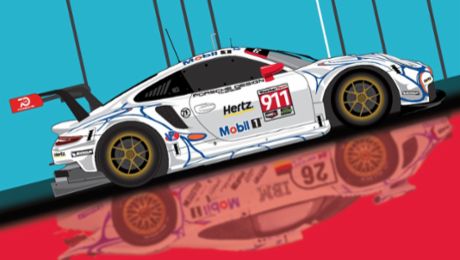 The popular “Porsche GT Team Poster Series” is now available for immediate download with images of each rendering produced since their 2018 introduction.