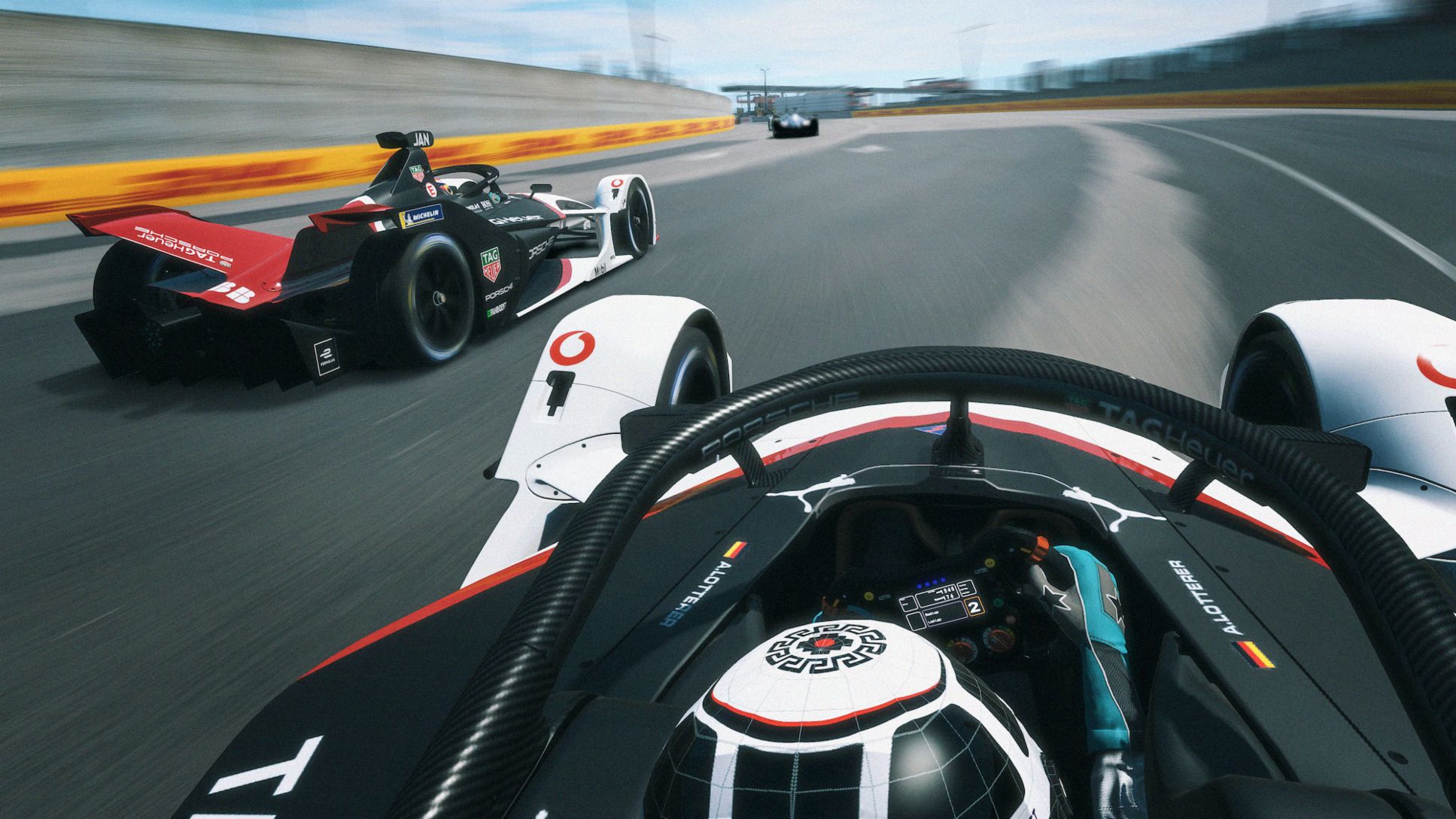 Neel Jani (Switzerland) has chalked up his first points for the TAG Heuer Porsche Formula E Team at the second race of the digital “Race at Home Challenge” in the ABB FIA Formula E Championship 2019/2020. After starting from eleventh position, the TAG Heuer Porsche Formula E Team factory driver moved up seven places during the race. Driving the virtual version of the No. 18 Porsche 99X Electric, Jani crossed the finish line in fourth-place. The result at the digital “Electric Docks” racetrack gives him twelve points in the overall standings.

"There are a lot of positives to take from it - especially our first points."

Jani’s teammate André Lotterer (Germany) gave a strong performance in qualifying to secure third-place on the grid. He had a good start in the virtual No. 36 Porsche 99X Electric, moving into second-place. However, Lotterer made an error in the tight chicane at the end of the start-finish straight on lap three. He spun around and fell back to 19th-place. The Porsche “works” driver finished the race in 17th-position.

The event for Formula E drivers was preceded by the “Challenger Grid” race. This primarily featured experienced sim racers with Simona De Silvestro (Switzerland) representing the Porsche brand. The test and development driver for the TAG Heuer Porsche Formula E Team gave a strong performance on her maiden appearance in the “Race at Home Challenge”. Starting from 22nd on the grid, she moved up ten places during the race and crossed the finish line in twelfth.

The “Race at Home Challenge” was launched as a replacement for the standard ABB FIA Formula E Championship 2019/2020 season races that have been postponed due to the current crisis. All the Formula E teams and a selection of top Esports drivers are taking part in two separate starting fields. The drivers participate in the virtual races in their race simulators at home.

The events follow the traditional Formula E scoring system, with bonus points awarded for pole position and the fastest race lap. Double points will be awarded in the final race of the season.

Race three of the championship will take place on May 9. The online races will be contested each week through the grand finale on June 7. Each live broadcast gets underway at 10:30 a.m. EST on the Formula E YouTube Channel.

The “Race at Home Challenge” is a partnership between the FIA Formula E Championship and the child welfare organization UNICEF, which will be receiving the donations raised during the race events.

Marco Ujhasi, Manager, Esports at Porsche Motorsport.
“What a thrilling second race in the ‘Race at Home Challenge’! There are a lot of positives to take from it - especially our first points. Starting from eleventh, Neel was able to show his full potential in the race as he battled his way to an excellent fourth-place with an error-free drive. André did a superb job in qualifying and the third-best time was the maximum he could have hoped for. He then took a big risk after the second lap but fell back after a driving error on turn one. Unfortunately, that prevented him from recording a top result. Simona also put on a great performance in the competitive Challenge Grid category, making up ten places in the event for professional sim racers.”

Neel Jani, Driver, No. 18 TAG Heuer Porsche Formula E Team Porsche 99X Electric.
“I am very pleased with the fourth-place and those first points in the second race of the ‘Race at Home Challenge’. I started well from eleventh position and was able to move up a few places. My pace was promising after that and I concentrated on producing an error-free race. Qualifying was not ideal. The lap could have been better. I will concentrate on qualifying in particular for the next race.”

André Lotterer, Driver, No. 36 TAG Heuer Porsche Formula E Team Porsche 99X Electric. “Qualifying went really well. I was pleased with the third-fastest time. I started the race well and moved up to second-place. Unfortunately, I then made a mistake on turn one and fell back a long way. It’s a shame as a podium finish would have been possible. E-racing can be just as tough as real racing, but we still gave a good performance and we are on the right track.”

Simona De Silvestro, Driver, No. 36 TAG Heuer Porsche Formula E Team Porsche 99X Electric.
“My first virtual Formula E race in the ‘Race at Home Challenge’ was a lot of fun. Qualifying was not perfect, but I was able to find my rhythm in the race. I got through turn one cleanly after the start and I was able to move up a few places as the race progressed. All in all, I am pleased with twelfth-place when you consider the strength of the sim competition in the Challenge Grid category. I will continue to prepare intensively for the next round.”

It was a successful start to the second season of the Porsche TAG Heuer Esports Supercup for Graham Carroll and Sebastian Job. The British duo from the Red Bull Racing Esports squad won the first two races of the 2020 season on the Circuit Zandvoort in the Netherlands. Carroll crossed the finish line first in the 15-minute sprint race, with Job winning the 30-minute main event on May 2. While last year’s champion Joshua Rogers (Australia) claimed a podium spot in the VRS Coanda Simsport Porsche 911 GT3 Cup race car during the main race, Formula 1 driver Max Verstappen (the Netherlands), piloting a simulated Porsche for Team Redline, cut through the field to finish in eleventh-place. Forty sim racers lined up to contest the opening round of the Porsche Esports championship on the iRacing simulation platform including Americans Brian Lockwood (Tallahassee, Florida) and Porsche Young Driver Academy graduate Mitchell deJong (Temecula, California).

“Starting the new season with a win feels terrific. I spent the last weeks preparing intensively and I’m pleased that I was able to reward myself for it.” Sebastian Job

Lockwood, who is a regular real-world driver in North American sports car racing, presented himself well in his debuted in the series. The Floridian finished with a podium, third-place, in the Sprint race and in fifth-place for the feature event. Formula 1-star Verstappen made his debut in the Porsche TAG Heuer Esports Supercup as the local hero. Finishing 21st in the sprint race also meant grid position 21 in the main race. Still, the 22-year-old put in a spirited drive on the simulated version of the racetrack on the Dutch North Sea coast. Verstappen finished in eleventh-place in Race 2. deJong, who finished in fourth-place in the 2019 championship, took 15th-place in the main race.

The second event on the Porsche TAG Heuer Esports Supercup calendar will be contested May 9, with the virtual one-make cup competing on the Circuit de Barcelona-Catalunya in Spain. The circuit in Montmeló north of Barcelona offers a diverse track layout featuring a combination of long and tight corners. The race can be seen live on the iRacing YouTube Channel.

Marco Ujhasi, Manager Esports at Porsche Motorsport.
“The start of the Porsche TAG Heuer Esports Supercup couldn’t have gone much better. Right up to the last corner in both races, we were treated to lots of duels and overtaking maneuvers. What’s more, the field is even stronger than last year. In the qualifying, the best 20 were separated by just 0.27 seconds. This underlines just how incredibly competitive our series is.”

Graham Carroll, Driver, Red Bull Racing Esports Porsche 911 GT3 Cup.
“I’m absolutely thrilled to have won the first race. Patrik Holzmann and Sebastian Job are two very strong teammates, and that, of course, is motivating. We aim to be as successful as possible this year.”

Sebastian Job, Driver, Red Bull Racing Esports Porsche 911 GT3 Cup.
“Starting the new season with a win feels terrific. I spent the last weeks preparing intensively and I’m pleased that I was able to reward myself for it.”