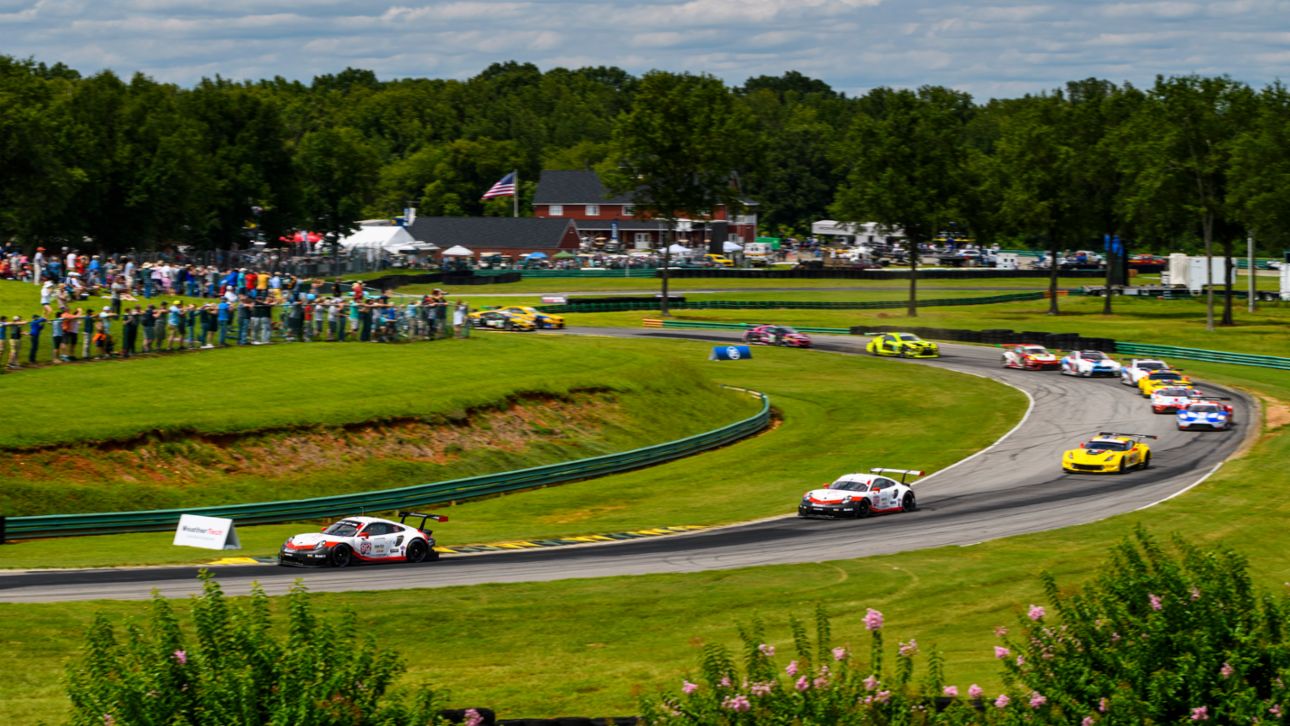 Twelve virtual Porsche 911 RSR race cars have been entered for the fifth race of the IMSA iRacing Pro Invitational, scheduled for May 28, at the simulated VIRginia International Raceway (VIR) in Alton, Virginia. Porsche factory driver Nick Tandy (Great Britain) won round four of the simulator-based race series which uses the iRacing platform to virtually recreate the IMSA WeatherTech SportsCar Championship’s GTLM class cars of the four different automotive brands in contention. The previous round at Road America, held on May 14, was the first iRacing Pro Series win for Tandy and Porsche. The 90-minute VIR race on the digital 3.27-mile track will take the green flag Thursday at 6:00 p.m. EST. Live coverage and commentary by the voice of IMSA Radio, John Hindhaugh, can be found on the iRacing YouTube page.

Robert Wickens (Canada) returns for his second IMSA race in the No. 9 Pfaff Motorsports Porsche 911 RSR while Era Motorsport has Great Britain’s Kyle Tilley in the No. 18. Longtime Porsche entrant Paul Miller Racing returns to the marque’s stable in a virtual way with Corey Lewis (Nazareth, Pennsylvania) behind the sim rig steering wheel of the No. 48. Three drivers will drive Meyer Shank Racing entries with Misha Goikhberg (Canada) and Shinya Michimi (Cincinnati, Ohio) in the Nos. 57 and 86, respectively. Veteran sports car, IndyCar and NASCAR driver AJ Almendinger (San Jose, California) steps from the NBC Sports booth to compete in the No. 60 for Meyer Shank. Former IMSA GT3 Cup Challenge USA and Canada champion Scott Hargrove will race the No. 92 Porsche 911 RSR virtually from his home in Canada.

The VIR round is the penultimate race of the inaugural IMSA iRacing Pro Invitational. The season finale at Watkins Glen International on June 11 will lead into the “Return to Racing” for IMSA on July 4 at Daytona International Speedway.

2019 was the inaugural season of the Porsche esports race series. Created from inception as a virtual race championship, it was the first one-make series created by a manufacturer and pays a combined purse of $200,000 USD.

In the overall 2020 standings, Rogers (161 points) is the new series leader. While the esports racer is still waiting for his first win of the season, he has finished four of the six races across three event weekends, in the top-five. Job ranks second overall with 155 points.

The next Porsche TAG Heuer Esports Supercup double-header event will be contested on the virtual Circuit de la Sarthe at Le Mans. The legendary racetrack in the northwest of France hosts the fourth event of the 2020 global Porsche Esports Championship on June 20.

Sebastian Job, Driver, Red Bull Racing Esports Virtual Porsche 911 GT3 Cup.
“After experiencing a bit of bad luck in Barcelona, this double victory feels very great. My lap times were very consistent in both races, and that proved to be the key to success. Next up on the racing calendar is Le Mans. I’m very much looking forward to it, particularly the long straights and the slipstream duels that happen there.”

Joshua Roger, Driver, VRS Coanda Simsport Virtual Porsche 911 GT3 Cup.
“Today, it was very important for me to earn points. I’m really happy with how the main race played out. After overtaking Alejandro Sánchez and moving into second, I would’ve loved to have gone for the lead. But Sebastian Job was strong and drove fast, steady laps at the front.”

At the debut appearance of the Berlin, Germany race course in the ABB Formula E “Race at Home Challenge”, André Lotterer (Germany) and Neel Jani (Switzerland) scored championship points for the TAG Heuer Porsche Formula E Team. Lotterer finished in seventh-place to claim six points in the drivers’ standings. His teammate Jani was classified in tenth-place and was awarded one point.

"The first few laps of the race were quite chaotic, but I came through pretty well."

In contrast to the events of last week, Lotterer managed to steer clear of any accidents in the opening phase and subsequently experienced a largely incident-free race. Jani lost a few places when a car ahead of him spun but battled his way back up through the field.

Jani remains the best-placed representative of the TAG Heuer Porsche Formula E Team in the sim racing series. Holding 25 points, Jani is in eighth-place in the championship standings. Lotterer has a total of twelve points and is in thirteenth-place. In the team standings, the duo is in sixth position with 37 points.

Marco Ujhasi, Manager, Esports Porsche Motorsport.
“It is nice to have finished with both drivers in the points at our virtual home race in Berlin. André and Neel were in the top-ten in qualifying, which ensured good starting positions for the race. The race proceeded without any significant events. Neel fell back by a few positions in the scramble at the start but then showed some fighting spirit. The point was a reward for that. André gave an error-free performance to finish in seventh-place. Marius Golombeck once again demonstrated his talent with a strong fifth-place finish in the ‘Challenge Grid’ category. It is great that Berlin is now part of the virtual Formula E calendar. The drivers had a lot of fun on the circuit.”

Neel Jani, Driver, No. 18 TAG Heuer Porsche Formula E Team Porsche 99X Electric.
“I started the race from ninth-place and scored one point. The first turn is decisive in any Formula E race. After the start, things did get tight at that point. I got stuck behind Oliver (Turvey) after his car spun out in front of me. That pushed me down a few places, but I was able to work my way back up.”

André Lotterer, Driver, No. 36 TAG Heuer Porsche Formula E Team Porsche 99X Electric.
“We finished seventh to score some more points. The first few laps of the race were quite chaotic, but I came through pretty well. As the race proceeded, I had a few battles with Max (Günther) but then I just concentrated on the race. I was able to defend that seventh place to the finish. Overall, it was a good performance.”

Gérard Larrousse, former Porsche factory driver, celebrated his 80th birthday on Saturday, May 23. Gérard Gilles Marie Armand Larrousse was born in 1940 in Lyon, France where his father ran a textile factory. “I was fascinated by motorbikes and sports cars from a young age, but my family had other plans for me. For my father, cars were mainly a means of transport,” he reminisces. When Larrousse was 21 and still a student, he attended the Ecole Supérieure de Commerce de Paris and took part in his first rally in France. After completing his studies and military service, Larrousse decided in 1966 to make racing his career. “My first job was as official works driver at NSU France. After that, I drove for Automobiles Alpine for two successful years,” he says of his early days as a professional racing driver.

In 1968, Gérard Larrousse almost prevented the first Porsche win at the Monte Carlo Rally. With a Renault Alpine 1300, he was a major opponent of Porsche works driver Vic Elford in a 911 T. Only when spectators shoveled snow onto the track on a special stage did Gérard lose control of the car and have to give up. However, in some way, Larrousse still won. When Porsche chief engineer Peter Falk approached Elford a little later and asked him who the best French racing driver was, he answered: “That would be Gérard Larrousse.” This is how the fast man from Lyon was appointed to the Porsche “works” team in November 1968.

The 1969 season started with the Monte Carlo Rally. In his first race, Larrousse finished in second-place behind Björn Waldegaard. In the end, he not only won the Tour de Corse in the Porsche 911 R that year, but also the Rallye Neige de Glace and the Tour de France d'Automobile stage race, where he proved his all-round talent together with Maurice Gélin. Gérard Larrousse: “The race took eight days. It was a mix of rally and hill climb, and drivers had to be skilled in both disciplines. But only a very few were skilled in both, among them Vic Elford who opened the door to Porsche for me.”

Gérard Larrousse also lived up to his reputation as a fast all-rounder when he finished in second-place at Le Mans in 1969. Together with Hans Herrmann, he lost the tightest finale of all time by a mere 131-yards (120-meters) at Le Mans. In 1970, he was again placed second in the endurance classic in Sarthe, this time with Willi Kauhsen and behind Herrmann and Richard Attwood. In the same year, he finished in third-place in the Tour de France Automobile with the Porsche 911 S 2.4 “Tour de France” in the yellow and red hippie livery just behind two Matra Simca prototypes. “I drove the lightest 911 ever built by the factory. It weighed 789 kilograms (1,739 lbs.),” says Larrousse. Originally, the 911 weighed 800 kilograms but Larrousse offered the mechanics a bottle of champagne for every kilogram they could save in a bet.

Larrousse enjoyed his greatest successes at the side of Vic Elford who became a long-time friend. In 1971, they won the 12 Hours of Sebring in a Porsche 917 as well as the 1,000-kilometer race at the Nürburgring in a Porsche 908/03 Spyder. At Porsche, Larrousse became known as a genuine all-rounder with the nickname of “the gentleman from Lyon” – straightforward, correct and one of the fastest in the world.

In the end, Gérard Larrousse earned two well-deserved victories at Le Mans. In 1973 and 1974, he won the race for Matra-Simca with his French compatriot, Henri Pescarolo. As the Renault racing team manager, he led the French car manufacturer to victory in the 24 Hours of Le Mans ahead of Porsche and then in the Formula 1 where Renault won its first Grand Prix in 1979. In 1986, in collaboration with French lawyer Didier Calmels, he established his own Formula 1 team under the name Team Larrousse Calmels.

Gérard Larrousse has continued his close involvement with Porsche and became President of the 24 Hours of Le Mans Drivers’ Club in 2008. As an ambassador of the Porsche brand, he is a sought-after contact for journalists, in particular for historic driving events. For instance, in 2017, he and his friend Vic Elford competed at the 17th “Tour de Corse Historique” in a Porsche 911 SC RS for the Porsche Museum. Gérard Larrousse is now retired and lives in Marseilles, France, active and happy dividing his time between riding his bike, playing golf and his automobile activities.