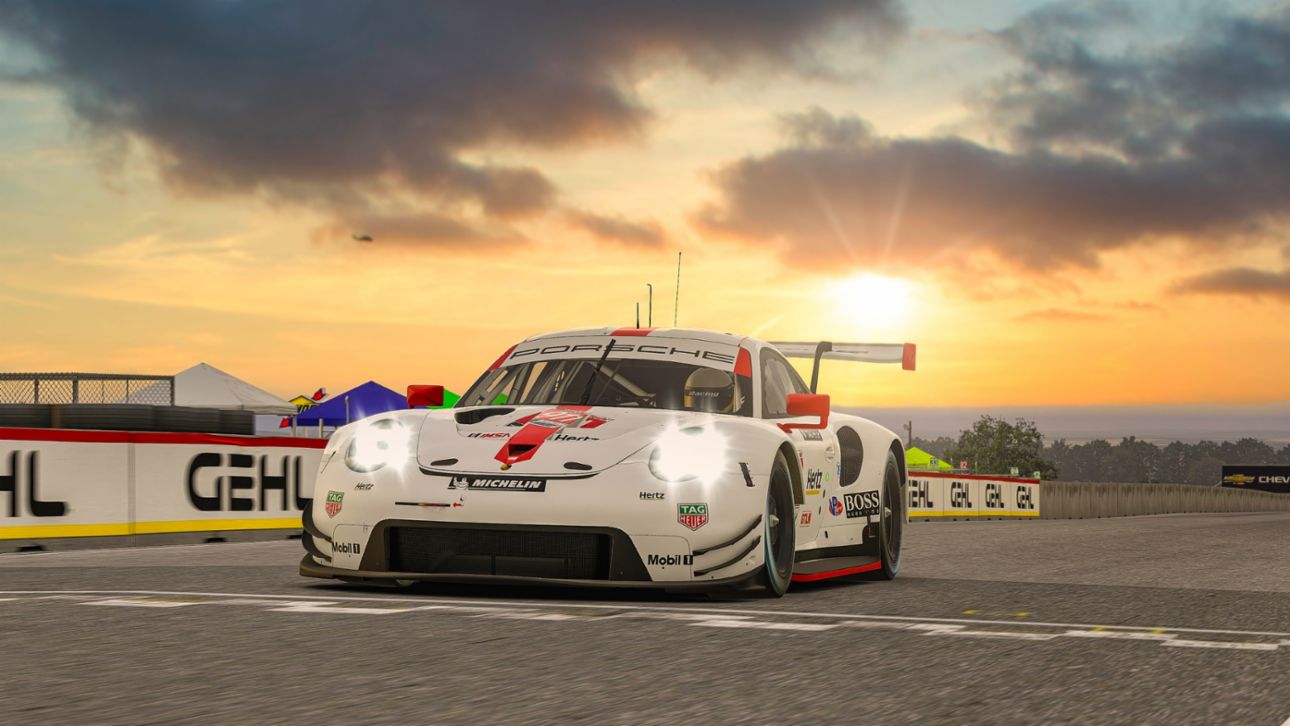 Porsche factory driver Nick Tandy (Great Britain) won round four of the IMSA iRacing Pro Series on the virtual Road America circuit. The experienced British racing driver put in an inspired performance at the wheel of his virtual No. 911 Porsche 911 RSR to cross the finish line at the Elkhart Lake, Wisconsin track with a lead of 2.845-seconds. During the 90-minute race using the iRacing online racing simulation platform, Tandy kept out of trouble in the tight and at times turbulent race to notch-up the maiden victory for Porsche in the digital IMSA racing series. In the lead-up to the race, Tandy had garnered valuable tips from Joshua Rogers (Australia), the reigning champion of the Porsche TAG Heuer Esports Supercup.

"I got a bit nervous during the last laps because I had a few glitches with my computer." Nick Tandy

Porsche Junior Ayhancan Güven (Turkey), however, was struck by major misfortune. After putting in a strong drive, the young driver was running in second-place behind his Porsche colleague Tandy. With approximately 19-minutes remaining in the race, his No. 913 Porsche 911 RSR sustained significant damages after making contact when a car he was lapping lost control directly in front of the Porsche Mobil 1 Supercup regular. Güven, who underlined his great skill as a sim racer by turning the fastest race lap by a convincing margin, was unable to continue. One of the most impressive performances came from the Japanese-American Shinya Michimi. The seasoned online driver born in Cincinnati, Ohio concluded the race in the Porsche 911 RSR entered by Meyer Shank Racing in fourth-place.

The reigning IMSA WeatherTech SportsCar GTLM class champions Laurens Vanthoor (Belgium) and Earl Bamber (New Zealand) crossed the finish line in positions 21 and 24. Canada’s Robert Wickens celebrated a strong debut at the wheel of the virtual Porsche 911 RSR fielded by Pfaff Motorsports. The former DTM driver, who is fighting his way back into racing after a serious IndyCar accident, finished in 27th-place.

Round five of the IMSA iRacing Pro Series will be contested May 28 at the virtual VIRginia International Raceway.

Nick Tandy, Driver, No. 911 Porsche 911 RSR.
“That was great fun! If you’re competitive and win, that always puts you in a good mood, of course. I’ll go to bed tonight feeling very happy. I got a bit nervous during the last laps because I had a few glitches with my computer. The screen kept going blank, but it all turned out ok in the end. A huge thank you to Joshua Rogers. Our reigning champion of the Porsche TAG Heuer Esports Supercup gave me a lot of very helpful tips over the past few days. It paid off.”

Ayhancan Güven, Driver, No. 913 Porsche 911 RSR.
“Congratulations to Nick. I’m delighted about his first win. We were focused completely on preparing for this race, and obviously it worked very well judging by our strong performances. Unfortunately, I had bad luck. My race came to an end after I touched a backmarker. It’s a pity, but at least we gave fans a good show – and victory went to Porsche. That’s the most important thing.”

At the final doubleheader round of the Porsche Mobil 1 Supercup Virtual Edition raced at a simulated Autodromo Nazionale Monza circuit developed on the iRacing online simulation platform, Larry ten Voorde (Netherlands) won both races in his 485 hp Team GP Elite Porsche 911 GT3 Cup race car. By virtue of the commanding performance, the Dutchman was crowned champion of the first Virtual Edition of the premier Porsche one-make series in the world. He snatched the trophy from his toughest rival Porsche Junior Ayhancan Güven (Turkey) in the Martinet by Alméras Porsche.

The winners of the other classifications were also decided in the digital series of the Porsche Mobil 1 Supercup. Thanks to his two podium results at Monza, Leon Köhler (Germany) won the rookie classification. Marc Cini (Australia) took home the ProAm-class title. The GP Elite squad from the Netherlands celebrated first-place in the team classification.

Oliver Schwab, Project Manager of the Porsche Mobil 1 Supercup.
“The season finale of the Porsche Mobil 1 Supercup Virtual Edition was perfect proof that a virtual season of our series was the right decision. Both races were gripping from start to finish. It’s fantastic that the drivers and teams embraced the virtual competition with such enthusiasm. Now we’re looking forward to the start of the real season.”

Larry ten Voorde, Driver, Team GP Elite Porsche 911 GT3 Cup.
“I did a lot of preparation work with my team for these two races. Ayhancan Güven and I put on a great show for the fans. I managed to control the race well and I’m delighted with the title.”

Ayhancan Güven, Driver, Martinet by Alméras Porsche 911 GT3 Cup.
“That was an action-packed debut season for the virtual Supercup. Unfortunately, I only finished second, but it was a terrific experience. I hope we can soon compete against each other on real racetracks.”

A mass pile-up caused chaos in the starting phase of the fourth race of the ABB Formula E Race at Home Challenge – and robbed the two TAG Heuer Porsche Formula E Team drivers of the chance to score points. Factory drivers André Lotterer (Germany) and Neel Jani (Switzerland) had to be content with 15th and 16th-places respectively on the virtual circuit in Hong Kong. Joshua Rogers (Australia) gave another strong performance at the wheel of the digital Porsche 99X Electric in the event for sim racers and influencers. The reigning Porsche TAG Heuer Esports Supercup champion had already secured pole position in qualifying. He then concluded his second race appearance of the season by crossing the line in second-place.

"It is no exaggeration to say that it was a tumultuous race."

After starting from tenth and 17th on the grid, some fine maneuvers saw the two Porsche drivers improve by several places, only to find themselves propping up the field after a series of not-at-fault collisions. The two Porsche “works” drivers then performed at a good pace in their Porsche 99X Electric simulated race cars and displayed great fighting spirit as they both moved up eight positions. Lotterer finished 15th-place, with Jani just one place behind. Jani remains fifth in the drivers’ standings with 24 points, while Lotterer is 14th with six points.

The “Challenge Grid” race at Hong Kong once again proved to be a fruitful soil for Joshua Rogers. Three weeks after recording a maiden win in the event for sim racers and influencers on the same circuit, Rogers finished in second-place to secure another spot on the podium. The Australian driver had missed the races on the last two weekends but returned to secure pole position on a simulated wet surface. In the race, Rogers made a series of defensive moves to hold his lead against challenger Lucas Müller (Germany). Ultimately, Rogers gave way to the German driver on the penultimate lap. Rogers scored 20 points for his pole position and second-place finish. He is now fifth in the drivers’ standings after competing in two of four races. Marius Golombeck (Germany), the second driver in a virtual Porsche 99X Electric, reached 15th-place.

Marco Ujhasi, Manager Esports at Porsche Motorsport.
“It is no exaggeration to say that it was a tumultuous race. It was the first time that qualifying for the ‘Race at Home Challenge’ took place on a wet surface. That was a challenge for all the drivers. Neel and André started from midfield. Right at the start of the race, they were involved in some incidents on turn one that pushed them back down through the field. Josh Rogers did another great job on his second appearance in the event for sim racers. However, he made a small error after securing pole position and a very good starting phase. Nonetheless, second-place is a very good result.”

Neel Jani, Driver, No. 18 TAG Heuer Porsche Formula E Team Porsche 99X Electric.
“Points were a possibility again today. Sadly, that didn't work out. Qualifying was difficult. Tenth-place is alright in these conditions. The start did not go according to plan. However, someone hit me on the way out of turn one. Now I am concentrating on the race coming up next Saturday.”

André Lotterer, Driver, No. 36 TAG Heuer Porsche Formula E Team Porsche 99X Electric.
“Despite the difficult conditions, I had a good feeling in qualifying, so I have to carefully examine where I lost some time. After the start, it was all chaotic on turn one. There wasn't much I could do, and I fell back to last place. At least I could still drive the car. That meant I could battle back and improve by a few places.”

Joshua Rogers, Driver, No. 36 TAG Heuer Porsche Formula E Team Porsche 99X Electric (Challenge Grid).
“I only just missed out on a second race win. Pole position in qualifying was great, of course, but the wet conditions surprised everyone. I started the race well and I got through turn one without any problems. I was then able to build up a lead, but I made a little mistake in the chicane. That caused some damage to the car and I couldn’t stop Lucas Müller from getting past towards the end of the race. I am happy, nonetheless. The performance level is there. It was fantastic to be driving for the TAG Heuer Porsche Formula E Team again. I am already looking forward to my next appearance in the ‘Race at Home Challenge.'"