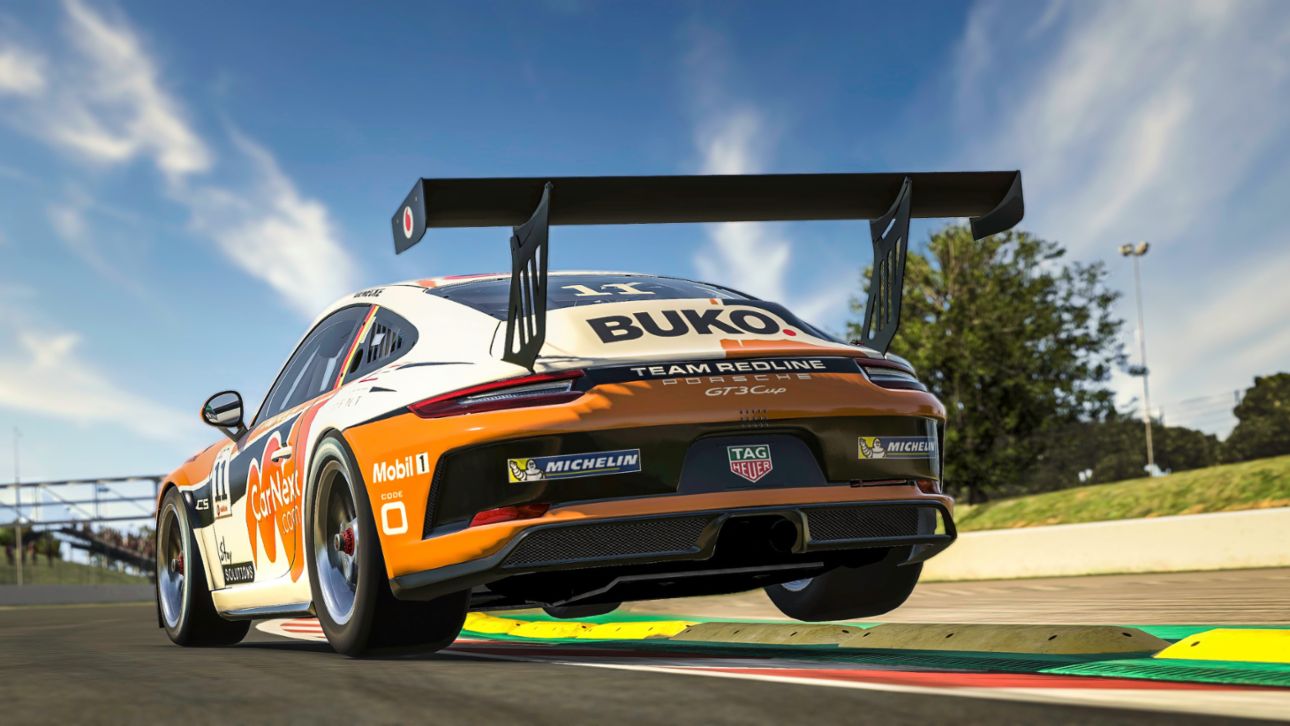 Saturday May 9 was successful second round for Maximilian Benecke (Germany) driving for Team Redline in the Porsche TAG Heuer Esports Supercup. The 2019 runner-up in the sim racing series developed by Porsche Digital won both the sprint and main races on the Circuit de Barcelona-Catalunya (Spain). Formula 1-star Max Verstappen (Netherlands) once again underlined his talent in the virtual Porsche 911 GT3 Cup race car claiming a second-place finish in the 30-minute race behind his Team Redline teammate Benecke. Forty sim racers contested the doubleheader event on the iRacing simulation platform.

"My team then worked hard and tested with me during the week and that paid off in Barcelona."

Right from the start of the 15-minute sprint race, Benecke laid the foundation for his first victory of the season. Heading into the race from the third grid spot, the 25-year-old took the outside line at the first corner to overtake Sindre Setsaas (Netherlands) driving for CoRe SimRacing and Jarrad Filsell (Australia) in the Apex Racing Team Porsche 911 GT3 Cup racer. Benecke then proceeded to pull clear of his pursuers over the remaining laps to cross the finish line in first-place with a 1.2-second advantage over Setsaas. Filsell claimed the third podium step.

Pole-setter Benecke again kept his cool at the start of the 30-minute main race. The Redline driver defended his lead and pulled away from the field. After 17 solid laps, Benecke clinched his second victory of the day on the 2.89-mile (4.655-kilometer) circuit.

In the main race, the situation among the pursuing pack grew turbulent behind Benecke: Max Verstappen benefited the most. After starting the race from seventh position, the Formula 1 driver was running in third-place after the first lap. Verstappen then set out to put more and more pressure on Sindre Setsaas. On lap four, the Dutchman made his move, squeezing past the CoRe sim racer at the end of the start-finish straight.

Next up on the Porsche TAG Heuer Esports Supercup calendar is Donington Park Circuit in England on May 23. The storied racetrack southwest of Nottingham was opened in 1931 and is the oldest track in England that is still used for motor racing events.

Maximilian Benecke, Driver, Team Redline Porsche 911 GT3 Cup Virtual Race Car.
“The season-opening event at Zandvoort was disappointing for me, unfortunately. My team then worked hard and tested with me during the week and that paid off in Barcelona. My starts were great, and I was very careful with the tires. That’s how I managed to maintain my lead.”

Max Verstappen, Driver, Team Redline Porsche 911 GT3 Cup Virtual Race Car.
“We did a lot of work over the last days and the result shows that the effort was worth it. First and second-place in the main race is simply great for the team. The field is extremely competitive. It’s impressive and I think it’s really cool to be part of it.”

The virtual Monaco circuit proved to be fruitful soil for the drivers of the TAG Heuer Porsche Formula E Team. Neel Jani (Switzerland) and André Lotterer (Germany) finished in fourth and seventh-place to score valuable points in the Driver and Team competitions at round three of the “Race at Home Challenge” run by the ABB FIA Formula E Championship. Test and development driver Simona De Silvestro (Switzerland) had previously finished 17th in the “Challenger Grid” race against sim racers and well-known influencers.

"I had a good start in the race and was able to climb straight into fourth-place in turn one. After that, it was all about staying fully-focused."

Starting from seventh and twelfth-places on the grid for the main race, Jani and Lotterer initially managed to successfully avoid any incidents. Both climbed three places and, compared to the opposition, continued to demonstrate strong pace and clever tactics after the early stages. As he had done in last week’s race, Jani, at the wheel of the virtual No. 18 Porsche 99X Electric, held on to finish in fourth-place. Lotterer made up a further two positions in the No. 36 car and eventually crossed the finish line in seventh-place.

The result was enough to earn Lotterer his first points in the digital series. Jani picked up twelve points for his fourth-place finish, taking the Swiss to 24 points and fifth-place in the overall standings. After three races, Lotterer currently lies tenth.

In the “Challenge Grid” race featuring sim racers and influencers, De Silvestro delivered a consistent performance in her digital Porsche 99X Electric. Starting from 22nd, the TAG Heuer Porsche Formula E Team test and development driver immediately gained four positions at the start. The Swiss pilot then climbed into 17th-place on lap four – a position she maintained for the rest of the race.

About the “Race at Home Challenge”
Race four of the championship will take place on May 16. The online races will be contested each week through the grand finale on June 7. Each live broadcast gets underway at 10:30 a.m. EST on the Formula E YouTube Channel.

The “Race at Home Challenge” is a partnership between the FIA Formula E Championship and the child welfare organization UNICEF, which will be receiving the donations raised during the race events.

Marco Ujhasi, Manager Esports at Porsche Motorsport.
“That was another display of pure virtual racing action today. Qualifying was rather mixed for Neel and André. They could both have started from further up the grid, however they both fought hard. Generally speaking, we are happy with the result and the points that both Neel and André scored after a flawless race. Simona once again did well in the ‘Challenge Grid’ race for professional sim racers and managed to climb into 17th-place.”

Neel Jani, Driver, No. 18 TAG Heuer Porsche Formula E Team Porsche 99X Electric.
“My latest fourth-place in the ‘Race at Home Challenge’ feels great. The seventh-fastest time in qualifying was okay. I had a good start in the race and was able to climb straight into fourth-place in turn one. After that, it was all about staying fully-focused. Two fourth-places in a row – I now hope I can make it onto the podium next time.”

André Lotterer, Driver, No. 36 TAG Heuer Porsche Formula E Team Porsche 99X Electric.
“Overall, I am happy with seventh-place. I did not put in a flawless lap in qualifying and lost a bit of time in turn two. I then worked my way through the field from eleventh-place on the grid in the race. I picked up some valuable points in seventh-place, although I was hoping for more. I am now looking forward to the next race and another shot.”

Simona De Silvestro, Driver, No. 36 TAG Heuer Porsche Formula E Team Porsche 99X Electric.
“I am happy to have been involved in my second virtual Formula E race. Like last Saturday, I started from the eleventh row after a rather tough qualifying session. Turn two was chaotic and cost me some time. After that, I was able to climb a few places and ultimately came home in 17th-place. My goal for future outings is to secure a better starting position in qualifying.”