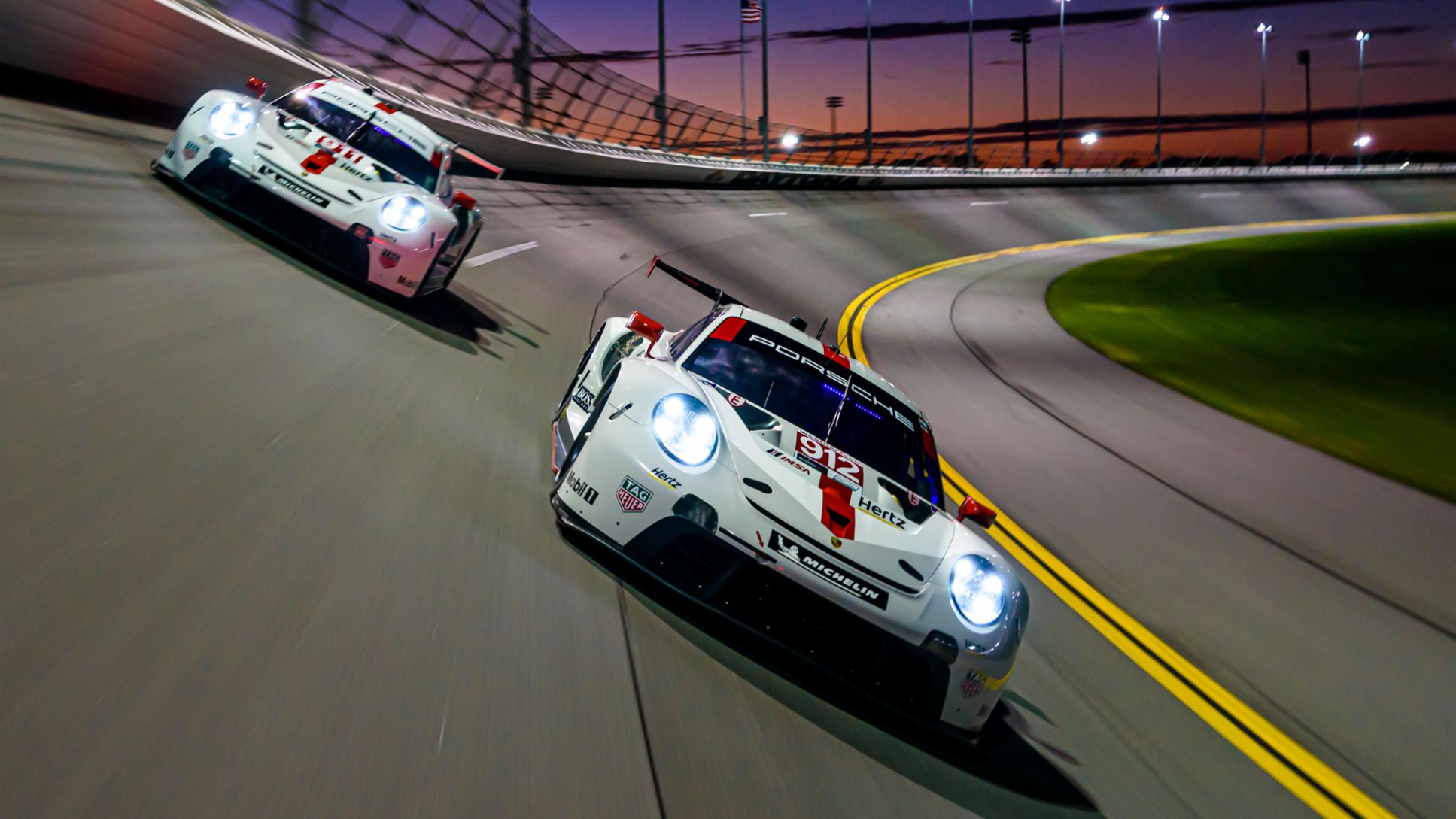 When the checkered flag falls on the 68th Annual Mobil 1 Twelve Hours of Sebring – scheduled for November 14 – it will mark the end to not only the 2020 IMSA WeatherTech SportsCar Championship season but also the Porsche GT Team factory effort in North America. First announced at the Circuit of the Americas (COTA) IMSA weekend on September 21, 2013, the program run by Rock Hill, South Carolina’s CORE autosport debuted on track with a victory in the 2014 Rolex 24 At Daytona – North America’s greatest endurance race – using the then new Porsche 911 RSR race car. Since that time, the Porsche GT Team has accumulated 12 IMSA Championships and a total of 18 victories, including four overall wins, with three variants of the most sophisticated Porsche 911 race car built. Most recently, the two-car team finished in second and third-places of the Rolex 24 GTLM class in January giving the team its 47th and 48th career IMSA podium finishes. The team has also earned a career 13 fastest race laps between the cars.

Success came early for the North American-arm of the Porsche “works” program. Owned by racer Jonathan Bennett and managed first by CORE’s Morgan Brady and, more recently once Brady ascended to COO, by Michael Harvey, the team swept to the Rolex 24 victory in the first race out with Patrick Pilet (France), Nick Tandy (Great Britain) and Richard Lietz (Austria). Tandy will close the 2020 program in the seat of the No. 911. Pilet raced the No. 911 to all 12 of the car’s IMSA victories. American Patrick Long (Manhattan Beach, California) was in the seat of the No. 912 for the team’s first season and gave the team its inaugural Mobil 1 Twelve Hours of Sebring title in 2014 with longtime teammate Jörg Bergmeister (Germany) and Michael Christensen (Denmark). Earl Bamber (New Zealand) took the seat of the No. 912 in 2015 earning his first IMSA factory win at COTA in 2016 with Fred Makowiecki (France). Bamber was by joined Laurens Vanthoor (Belgium) in 2018 and “Bamthor” was born in the No. 912. The popular pairing scored its first victory at the Mid-Ohio Sports Car Course in 2018 and has gone on to account for four of the car’s six total career wins to-date.

Pascal Zurlinden, Director Factory Motorsport.
“For us sportspeople, such endings are always painful. For our operational team Core autosport and everyone involved, I’m very sorry that we were unable to make this decision with more lead time. At the same time, I’d like to thank everyone affected by this for their professional handling of this situation.”

Jon Bennett, Owner, CORE autosport.
“CORE’s partnership with Porsche has always been a dream for me. Not just because I love the brand, but because partnering with Porsche’s history and reputation raised the visibility of the exceptional work we do at CORE. I thank Porsche for an incredible seven years and I thank our employees who are the best in the business. I am honored we shared this journey together.”

Morgan Brady, Chief Operating Officer, CORE autosport.
“This has been an amazing seven-year partnership. I’m extremely proud of everything we’ve accomplished. While we continue to prepare for the remaining 10 rounds of the IMSA Championship, we’re sensitive to how this departure will affect our team members and their families.”

* CORE autosport contributed to this story.

The six-round IMSA iRacing Pro Invitational season will come to close on Thursday, June 11 with a 90-minute battle around the virtual Watkins Glen International circuit. Twelve Porsche 911 RSR virtual race cars will race for the honors in the finale with 2019 IMSA WeatherTech SportsCar Championship GTLM champion Laurens Vanthoor (Belgium) leading the way in the No. 912 Porsche GT Team entry. Porsche has one victory – at Road America on May 14 with Nick Tandy (Great Britain) driving – in the first IMSA sim racing series campaigned on the iRacing digital platform.

Live coverage of the event – including play-by-play with the “Voice of IMSA Radio” John Hindhaugh – can be found on the iRacing YouTube channel beginning at 6:00 p.m. ET, Thursday, June 11. The final virtual event for the IMSA championship leads into the “Return to Racing” for IMSA with the WeatherTech 240 At Daytona on July 4 at Daytona International Speedway.

The ABB Formula E “Race at Home Challenge” has drawn to a close with a thrilling finale on the virtual circuit in Berlin, Germany. André Lotterer (Germany), from the TAG Heuer Porsche Formula E Team, finished in tenth-place adding more points to his total in the final event of the esports championship. Collisions just after the start created chaotic conditions and prevented Lotterer’s teammate Neel Jani (Switzerland) from recording a good result; Jani had to settle for 23rd-place. In the “Challenge Grid” race for sim racers and influencers, Joshua Rogers (Australia) followed-up four consecutive podium finishes with a spot in the top-five.

Marco Ujhasi, Manager Esports, Porsche Motorsport.
“That was a fantastic finale to the ‘Race at Home Challenge’ in Berlin. Congratulations to Stoffel Vandoorne on his victory in the drivers’ championship. Over the last eight weeks we have enjoyed some thrilling sim racing that has allowed us to provide virtual proof of just how fascinating Formula E is, even during the Coronavirus pandemic. It was particularly nice to be able to collect donations for UNICEF as well – a great campaign for a good cause. The season in the virtual motorsport world will continue for us now. I hope that Formula E and the TAG Heuer Porsche Formula E Team will soon be back in competition, thrilling fans on the real racetrack.”

Neel Jani, Driver, No. 18 TAG Heuer Porsche Formula E Team Porsche 99X Electric.
“Those were some intensive weeks in the ‘Race at Home Challenge’. I had never spent so much time on the simulator at home before. It was definitely worth it as we supported UNICEF and helped children all around the world. From a sporting point of view, it took me a while to get used to the virtual Formula E, but I got more into the swing of it with each race – on the circuit itself as well as with regard to the technical requirements, streaming and many other things. Now I am looking forward to hopefully being able to return to real motorsport in the near future.”

André Lotterer, Driver, No. 36 TAG Heuer Porsche Formula E Team Porsche 99X Electric.
“This race marked the end of the ‘Race at Home Challenge’. All in all, it was an excellent idea to get this series going to benefit UNICEF. It was also great fun to compete against the Formula E guys over the last few weeks. We trained a lot to improve from race to race. That was anything but easy. Now I hope that we can step on the gas on a real circuit sometime soon.”

Joshua Rogers, Driver, No. 18 TAG Heuer Porsche Formula E Team Porsche 99X Electric, Challenge Grid.
“I did not have an easy final race. I moved up one place after the start but after that it was difficult to make any more progress. I am pleased with fifth-place, especially seeing as my participation in other Esports events prevented me from taking part in all the races. Congratulations to Kevin Siggy. He did a great job and has more than earned his Formula E test drive. Working with the TAG Heuer Porsche Formula E Team during the ‘Race at Home Challenge’ was a great experience for me. I would like to thank Porsche for this fantastic opportunity.”