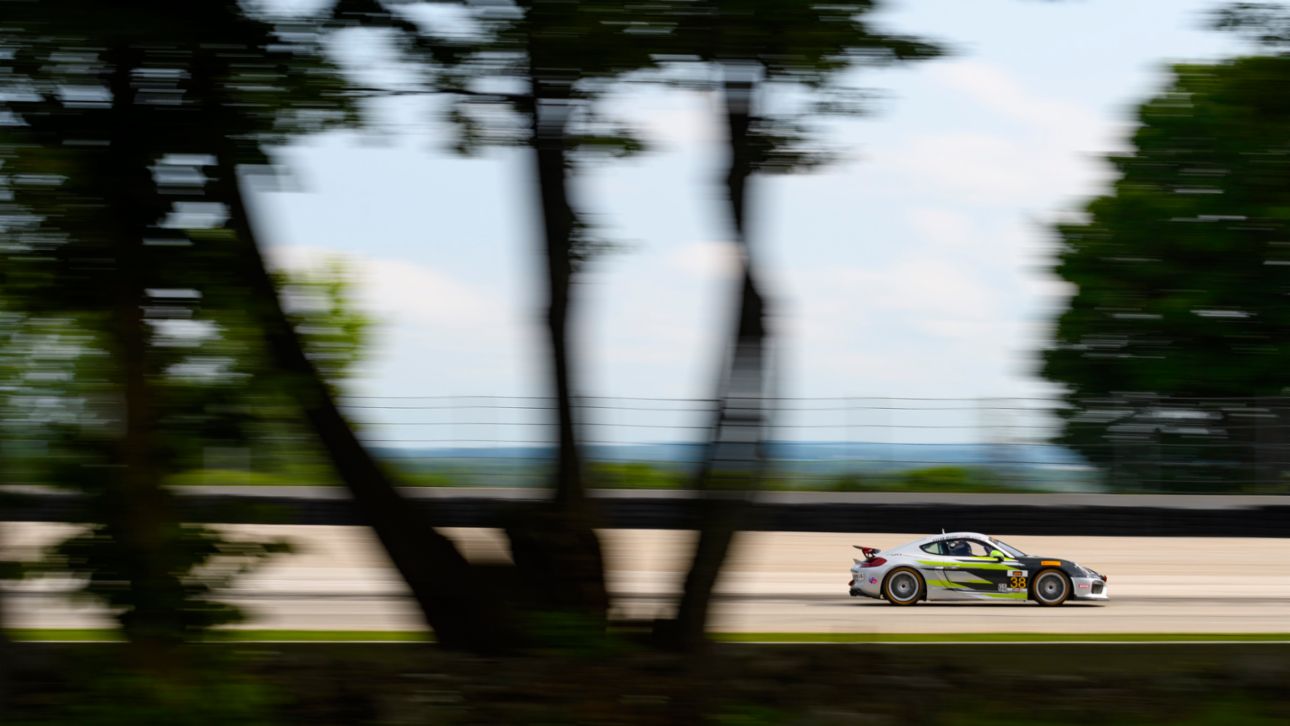 2020 has proven to be a year of promise for the Porsche race teams in the IMSA WeatherTech SportsCar Championship. Thus far, in the first three events of North America’s premier GT racing series, the Porsche GT Team has placed at least one 911 RSR-19 race car – and both cars twice – on the ultra-competitive GTLM class podium. Round Four holds even more promise for Porsche in both the GTLM and GTD classes with the IMSA SportsCar Weekend at Road America on August 2. The pristine, four-mile Road America circuit in Elkhart Lake, Wisconsin was famously named “America’s Nordschleife” by Porsche legend Jörg Bergmeister. The German should know having been a winner at both “America’s National Park of Speed” and on the iconic “Green Hell” of the Nürburgring Nordschleife in Porsche race cars. Each facility is among the longest in the sport, cuts through tree-lined country side and require an unmatched level of technical skill and courage. The IMSA SportsCar Weekend at Road America will be held Sunday, August 2 with TV coverage live on NBC at Noon Eastern Time.

While the two-car Porsche factory effort has yet to win in 2020, by virtue of podium finishes in each of the first three races, the No. 912 entry of “works” drivers Laurens Vanthoor (Belgium) and Earl Bamber (New Zealand) is in second-place of the Drivers’ Championship, one marker out of the top spot. Their No. 911 sister car driven by Nick Tandy (Great Britain) and Frédéric Makowiecki (France) has two podium finishes and is ranked in fifth-place, ten points out of the lead. Meanwhile, in the customer-focused GTD class, the No. 16 Wright Motorsports machine shared by factory ace Patrick Long (Manhattan Beach, California) and Ryan Hardwick (Atlanta, Georgia) is tied for fourth-place in the drivers’ title chase, five points behind the class leader.

With 13 wins, Porsche is tied with Chevrolet for all-time IMSA victories at Road America. The German marque has claimed two-straight victories with the Porsche 911 GT3 R race car in the GTD class with Pfaff Motorsports charging to a victory here in 2019 – Pfaff is unable to compete this weekend due to Canadian travel restrictions – and Wright Motorsports in 2018. Wright’s Patrick Long is tied for second most victories (three) for active drivers with class wins coming in 2005 and 2006 (White Lightning Racing) and 2018 (Wright co-driving with Christina Nielsen). North America’s only Porsche “works” driver also has a pole position in 2018. Nick Tandy has one victory here in the No. 911 Porsche GT Team machine. The win came in 2015 with fellow factory driver Patrick Pilet (France). While the No. 912 is yet to win at America’s Nordschleife, Earl Bamber did capture the GTLM class pole position in 2015.

"We will have our work cut out for us to give Porsche and Wright Motorsports another win at Road America.”

Patrick Long, Driver, No. 16 Wright Motorsports Porsche 911 GT3 R.
“Road America is personally my favorite of all the tracks on the schedule. Our 2018 run there was a big race for us as a team, and we'd like to try to repeat that. The competition is fierce as ever and we'll go into this weekend trying to come off the truck strong. We'll execute our strategy and pit stops and have a consistent race and push forward. The season is getting busy from now on and it's going to be a hot summer. We will have our work cut out for us to give Porsche and Wright Motorsports another win at Road America.”

Ryan Hardwick, Driver, No. 16 Wright Motorsports Porsche 911 GT3 R.
“Road America is one of the greatest circuits in the world, and I think we will have a solid race car for this next IMSA race weekend as well. For me personally, I’m really starting to get the feel for pushing the rear-engine Porsche to the limits. As for the Wright Motorsports team, these guys have been on top of their game all year. They are putting in the work on developing the car, as well as executing mistake-free pit stops on the race weekends. I’m looking forward to seeing what we can accomplish together this weekend in Wisconsin.”

Fresh off of their third-place result in Sebring, Florida, Trent Hindman (West Long Branch, New Jersey) and Alan Brynjolfsson (Tampa, Florida) will rejoin Archangel Motorsports in the No. 7 VOLT Lighting Porsche 718 Cayman GT4 Clubsport at Road America for Round Three of the 2020 IMSA Michelin Pilot Challenge season. In the last two years, the Hindman/Brynjolfsson pairing has earned two victories at the Elkhart Lake, Wisconsin track under the direction of team principal, Mike Johnson. The most recent win on the 4-mile “National Park of Speed” came in the Porsche 718 Cayman GT4 Clubsport in SRO GT4 America competition.

While changing weather conditions hindered their chances at a Road America podium during last season’s Michelin Pilot Challenge round, the team hopes to combine that same speed with their newfound momentum from Sebring at a track that suits the Porsche well.

And They Are Off. Porsche GT3 Cup Challenge USA Finally Makes 2020 Debut.

The thoroughbreds of the IMSA Porsche GT3 Cup Challenge USA by Yokohama were at the gate and ready to race in St. Petersburg, Florida in March when, literally as they waited to pull onto the track, race organizers closed the weekend for concerns surrounding the spread of COVID-19. Now, after six months of waiting, the 21 Porsche 911 GT3 Cup race car entries will have their chance to fight for victory in North America’s top one-make championship. Unlike the narrow street circuit of St. Pete, the mix of the United States’ best young Porsche pilots and seasoned veterans will chase their first podiums of the year at the wide-open, 4-mile Road America in Elkhart Lake, Wisconsin. Two, 45-minute sprint races are scheduled for the IMSA SportsCar Weekend. The first on Saturday, August 1 at 12:45 p.m. Central Time and the second at 9:00 a.m. on Sunday, August 2.

Riley Dickinson, Driver, No. 53 Moorespeed Porsche 911 GT3 Cup.
“I’m really looking forward to kicking off the 2020 IMSA Porsche GT3 Cup Challenge USA by Yokohama season with rounds one and two this weekend at Road America. A couple of weeks ago, the Moorespeed team and I had a two day test at Road America and it was refreshing to say the least. It felt great to not only jump back into my Moorespeed Porsche 911 GT3 Cup car, but also being at the track surrounded by my team.

I want to give a huge thank you to everyone at IMSA, Porsche Motorsport North America and Yokohama for what they have done to get our season resumed in 2020. It’s going to be pretty cool to see all the fans scattered around the fence lines this weekend!

Even though we are officially going to start our season in July, this year is still going to be as action packed as ever and I can’t wait to get the 2020 GT3 Cup Challenge USA season underway!”