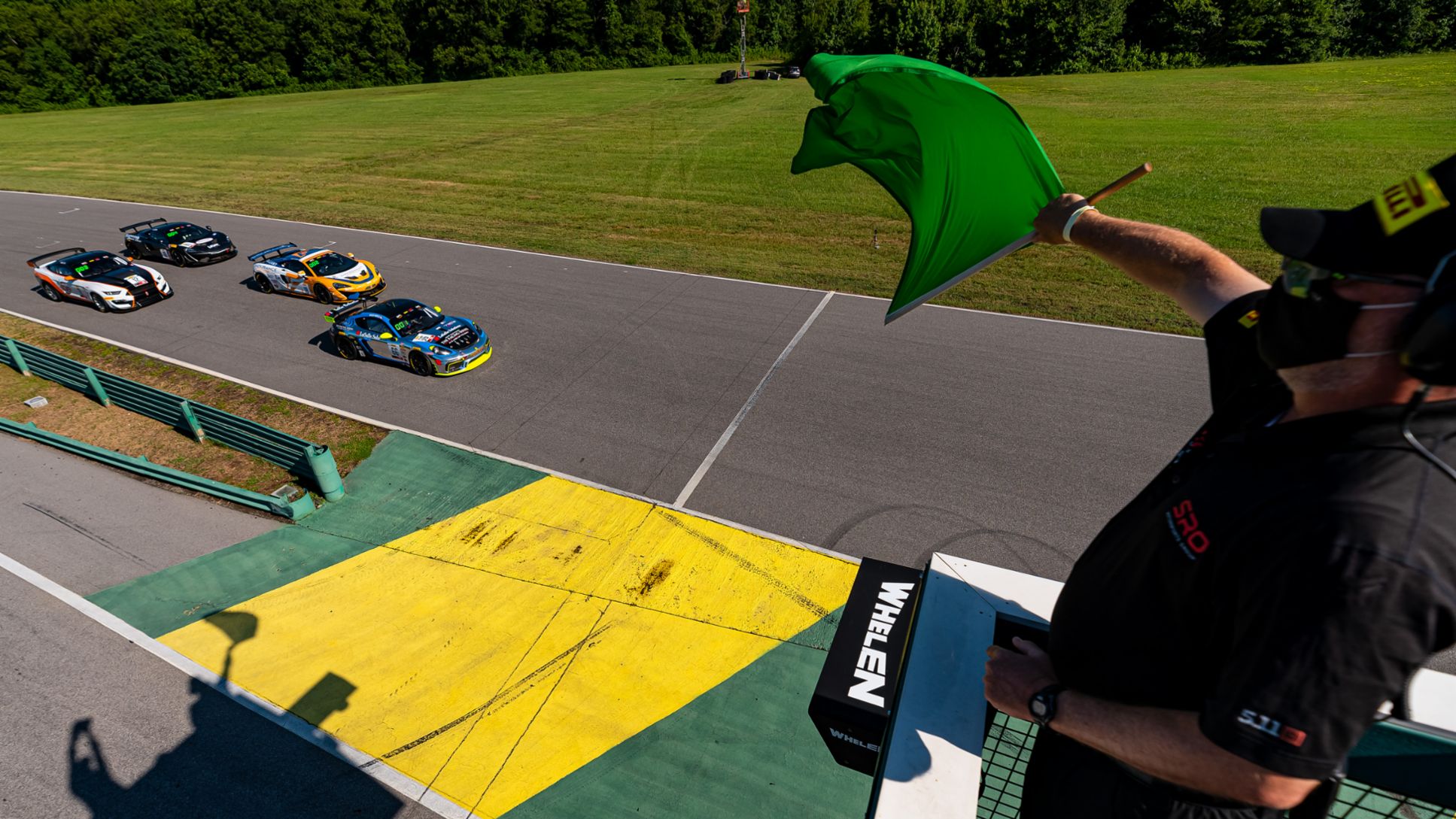 SRO America returned to real life racing at a real serious race track over the weekend. There was no easing back into competition for the top sprint format GT race series in North America as the teams of its four major championship – GT World Challenge America, GT Sports Club (GTSC), GT4 America Sprint and GT4 America SprintX – took on the venerable VIRginia International Raceway (VIR) with ten races between July 10 – 12. Porsche privateer entrants added five victories to the German marque’s lifetime worldwide total of over 30,000 wins. In total, Porsche teams had 19 podium finishes during the visit to the Alton, Virginia facility.

The weekend – the first event for SRO since the early March races at the Circuit of the Americas in Austin, Texas – saw the series debut of the GT Sports Club (GTSC) class for GT2-spec race cars. Porsche added another footnote in the sport’s history books as the inaugural winner of the new championship with the 911 GT2 RS Clubsport, a race car directly based on the road-going Porsche 911 GT2. Not only did the sports car manufacturer win both races (held Saturday, July 11 and Sunday July 12) with 311RS Motorsport driver Ryan Gates taking the top step of the podium both days, but also swept the podium with the 700 HP (before series controlled balance of performance restrictions) debutant. The wins came not only in the series’ and the car’s premiere but also in the team’s first weekend of SRO competition. Additionally, Porsche swept the podium in both 40-minute races which ran within the 90-minute GT World Challenge America events.

"It was hot and spicy all race."

The GT4-spec Sprint and SprintX championships accounted for six races over the weekend with two rounds acting as replacements for events (St. Petersburg and Long Beach) canceled as a result of the COVID-19 lockdown. The mid-engine Porsche 718 Cayman GT4 Clubsport, which shares 80 percent of its components with its road-going sibling, continued where it left off at COTA. In the 60-minute, two-driver per car SprintX races, Porsche scored a total of ten podium finishes including two victories. Twin class wins for NOLASPORT in Sunday’s Race Three echoed the team’s complete lockout of the top-step of the podium in Austin. In the Pro/Am class, Matt Travis and Jason Hart drove the No. 47 machine to victory lane while the win in the all amateur class known as “Am” went to Zac Anderson and Sean Gibbons in the No. 7 out of New Orleans.

Spencer Pumpelly continued to lead the way early in the GT4 America Sprint championship piloting the No. 66 TRG Porsche Cayman GT4 Clubsport to the win in Race One. The veteran Porsche racer took second-place overall in the final two races of the weekend.

Ryan Gates, Driver, No. 311 311RS Motorsport Porsche 911 GT2 RS Clubsport.
“We would like to thank Porsche Motorsport for their support during our team’s winning debut at VIR with SRO GT Sports Club America. Porsche’s reliable 911 GT2 RS Clubsport platform coupled with on-site factory support was key to executing our plan of attack for the weekend. It was great to see the passion and enthusiasm we have for Porsche shared by the folks from PMNA at the track - Mike, Jeremy, Chris and Derrick.”

Zac Anderson, Driver, No. 7 NOLASPORT Porsche 718 Cayman GT4 Clubsport.
“This weekend was a roller coaster. Friday’s Race One was going to plan for the number seven Porsche until deep into the back straightaway I felt and heard the first signs of fuel starvation. Thankfully, we were at the top of the roller coaster so I could roll across the line P3. Big disappointment with a win seconds away. Race Two, P2 would have to do. My stint was sandwiched between an ABS-less Kozarov backing me into the TRG 718 of Derek Deboer. It was hot and spicy all race! Race Three came together well from all angles. Good pace, a good driver change and good communication. We climbed a step of the podium each day we raced at VIR, and to me that’s such a cool first racing experience to have had here. Thanks to Jason Hart and Matt Travis for being such strong teammates to sponge from. My thanks to my teammate Sean Gibbons and Sam Owens from OGH Motorsports for trusting me in their machinery. Hope to see y’all at Sonoma!”

The ABB FIA Formula E Championship finale in Berlin, Germany will see the TAG Heuer Porsche Formula E Team report back in early August, after a break from racing of more than five months. In the tenth episode of the “Inside E” podcast, Porsche factory drivers Neel Jani (Switzerland) and André Lotterer (Germany) talk about their excitement over the upcoming six races, all of which will take place on the streets of the German capital. They also look back at the period of the coronavirus lockdown and report on their experiences in the ABB Formula E “Race at Home Challenge” and in the virtual 24 Hours of Le Mans.

The two Porsche “works" drivers had very different experiences over the past few months – Lotterer was at his holiday home in France while Jani was with his family in Switzerland. Despite the difficult time overall, they both gained positive experiences. “Usually, we are hardly at home. It was great to have more time in one place and enjoy the little things,” said Lotterer. Jani also described the recent months as a “unique opportunity” to do things that there just isn’t time for usually. “In normal circumstances, we are on the go the whole time and have to prepare for the next races. I was able to spend more time with my family and focus on other projects, such as working in the garden,” said the Swiss driver.

“Inside E” episode 10: interview with Neel Jani and André Lotterer

Jani and Lotterer didn’t get bored during the coronavirus lockdown. After the disruption to the ABB FIA Formula E Championship, the works drivers went from real-world racing to sim racing. In the “Race at Home Challenge”, Formula E collected donations in aid of the child welfare organization UNICEF with the virtual 24-hour race at Le Mans as a further sim racing highlight. “I have great respect for what sim racers achieve in this kind of endurance race from a mental perspective,” said Jani. Lotterer also makes comparisons with the real-world endurance classic. “There are definitely elements that you can use in real-world endurance races. For example, the traffic management,” added the German.

Now, the long wait for the return to the real-world cockpit is over. With six Formula E races in nine days, August 5 – 15, the TAG Heuer Porsche Formula E Team faces a tight sporting schedule. On the track at Berlin-Tempelhof, there will be two double-header races on each of the three different track configurations. “It will be an intensive period, but I am really looking forward to it,” said Jani. “The simulator work is different because we prepare for three track layouts for one venue,” said Lotterer. There is great motivation and excitement for the return.

The Porsche Formula E podcast is in English and is available in the Porsche Newsroom. “Inside E” is also available on other platforms such as Apple Podcasts, Spotify and Google Podcasts.