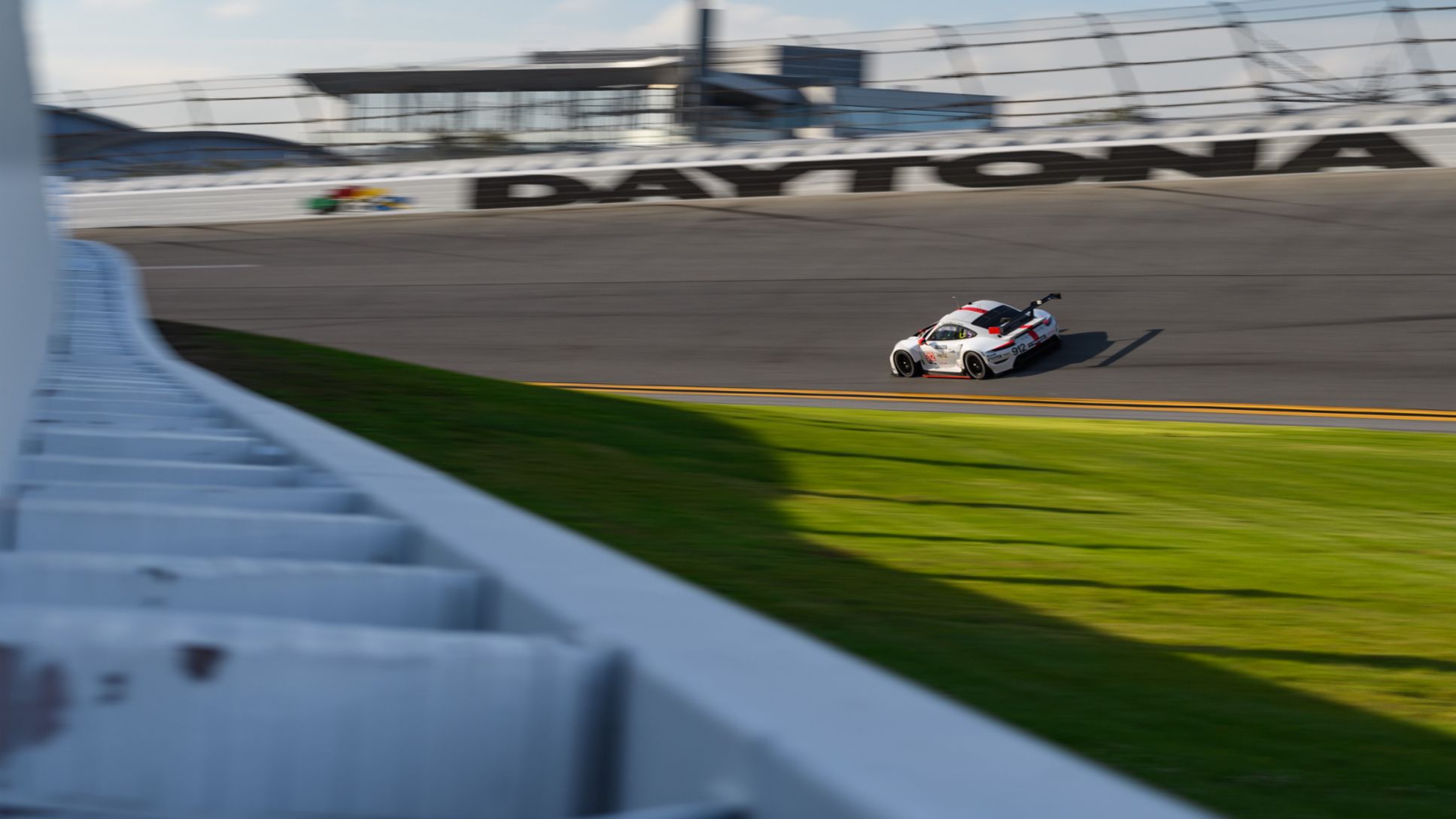 The new Porsche 911 RSR race car, designated as 911 RSR-19 for its 2019 unveiling, readies for its first competition run in North America at the Rolex 24 At Daytona. The January 25 – 26 race at Daytona International Speedway in Florida is the season-opening round of the IMSA WeatherTech SportsCar Championship. The two 515-hp, 2019-generation GT racers are set to run in the professional GTLM class by the Porsche factory team’s North America arm.. IMSA’s 2020 season begins at the most challenging race on their schedule, 24-hours of racing on the 3.56-mile high-speed road course and high-banked oval. Porsche looks to defend its 2019 manufacturers’, drivers’ and team championships with a strong start. The marque is also well represented in the Pro-Am style GTD class with three programs running the customer-specific Porsche 911 GT3 R race car.

At the 911 RSR-19’s first public appearance on this continent, during the three-day official IMSA test known as the “ROAR Before the Rolex 24” earlier this month, the new Porsche showed well running at or near the top of the timesheets of the world’s most intensely competitive GT series. Led by all-factory driver lineups, the No. 911 Porsche GT Team cockpit is shared by full-season drivers Nick Tandy (Great Britain) and Frédéric Makowiecki (France) with Matt Campbell (Australia) joining for the endurance races. In the identical number 912, 2019 IMSA GTLM Drivers Champions Earl Bamber (New Zealand) and Laurens Vanthoor (Belgium) have Frenchman Mathieu Jaminet as their third.

Porsche is the most successful sports car manufacturer at Daytona. The German marque has notched 18 overall wins as a constructor and four more as an engine partner. The impressive track record also includes 78 class victories. With five overall victories and one class win, American racing legend Hurley Haywood (St. Augustine, Florida) is tied for the most Rolex 24 Hour wins; all in a Porsche.

The Porsche 911 RSR-19 produces approximately 515 hp depending on the series mandated air restrictor. The race car is based on the high-performance 911 GT3 RS road-going sports car. Compared to its extremely successful predecessor model, the car received improvements, most notably to areas such as drivability, efficiency, ergonomics and serviceability. 95 percent of all components are new. A 4.2-liter, six-cylinder, normally aspirated boxer/”flat” engine powers the 911 RSR-19.

Pascal Zurlinden, Director Factory Motorsport.
“The new Porsche 911 RSR makes its US debut at the 24 Hours of Daytona. With two one-two results and three pole positions, the new racing-911 has already impressively underlined its huge potential in the FIA WEC. We now want to build on these successes at the start of the North American season and win the long-distance classic in Florida.”

Nick Tandy, Driver, No. 911 Porsche GT Team Porsche 911 RSR-19.
“I’m looking forward to kicking off the North American season at Daytona with the new Porsche 911 RSR. I want to climb to the very top of the podium there. The Daytona International Speedway is one of my favorite circuits. The track layout is special and I’m expecting a close and exciting race.”

Frédéric Makowiecki, Driver, No. 911 Porsche GT Team Porsche 911 RSR-19.
“The Daytona 24-hour race is one of the most important endurance events in the world – a high-speed circuit with long full-throttle passages. We started from pole position last year but were unable to defend our spot in wet conditions during the race. We want to do better this year and achieve a good result at our first US outing with the new Porsche 911 RSR. I have two fast teammates with Nick and Matt. Combined with our team and the new 911, we have a perfect package. We have to quickly find our rhythm, then we can go for victory.”

Matt Campbell, Driver, No. 911 Porsche GT Team Porsche 911 RSR-19.
“To contest my first race as a Porsche works driver at Daytona and compete in a team with Nick and Frédéric is a huge step in my career. I hope to learn a lot from these two seasoned drivers and be amongst the frontrunners with them at the famous Daytona 24 Hours.”

Earl Bamber, Driver, No. 912 Porsche GT Team Porsche 911 RSR-19.
“I’m looking forward to the start of the IMSA SportsCar Championship. Laurens and I achieved great results in the series last year and won the drivers’ championship. We now want to defend that. We are keen to make our intention clear right from the outset with a good result at Daytona.”

Laurens Vanthoor, Driver, No. 912 Porsche GT Team Porsche 911 RSR-19.
“Daytona is a really important race for me. I’ve always dreamed of winning the four major 24-hour classics: Le Mans, Spa-Francorchamps, Nürburgring and Daytona. I’ve achieved the first three, just Daytona is missing. We were close last year with third-place, but this time we want to win. Another goal this season is to defend the championship title with Earl. A win at Daytona would be the perfect start to the season.”

Mathieu Jaminet, Driver, No. 912 Porsche GT Team Porsche 911 RSR-19.
“It’s a great feeling to open the US season at Daytona with the title defenders Earl and Laurens. It’s my second time at this prestigious race. The new Porsche 911 RSR has already underlined its huge potential in the FIA WEC, we’re definitely one of the favorites and want to fight for victory at Daytona.”

Patrick Pilet, No. 9 Pfaff Motorsports Porsche 911 GT3 R.
“Daytona is a very special racetrack with a combination of steeply banked curves and a tight infield. Anything can happen here, but with our strong driver crew and experienced team we can be at the forefront. I’d like to kick off the 2020 racing season successfully and bring home my first win in the competitive GTD class.”

Patrick Long, No. 16 Wright Motorsports Porsche 911 GT3 R.
“The competition in the GTD class is brutal. We prepared ourselves well at the official “Roar” test and the team is feeling highly motivated. I’m looking forward to contesting the new season with Wright Motorsports. Our strategy for Daytona is to survive the night and when the sun comes up go for victory. We have a strong crew in our cockpit and we’ll push hard.”

Sven Müller, No. 54 Black Swan Racing Porsche 911 GT3 R.
“Daytona has always been a highlight at the start of the season. My drive for Black Swan Racing came at late notice, so I’m really thrilled to be there and put in a strong drive with a super team and great teammates.”

The Porsche GT Team will have a new partner TAG Heuer for the 2020 race season. The collaboration with the Swiss luxury watchmaker will run for several years. Both manufacturers can look back on many joint successes in motor racing including the legendary “TAG-Turbo made by Porsche” engine program. The high-horsepower turbocharged Porsche engine powered McLaren Formula 1 cars in the 1980s and won two constructors’ world championships (1984 and 1985) as well as three drivers’ world championship titles (1984 – 1986). TAG Heuer has been the title and timing partner of the TAG Heuer Porsche Formula E team since 2019.