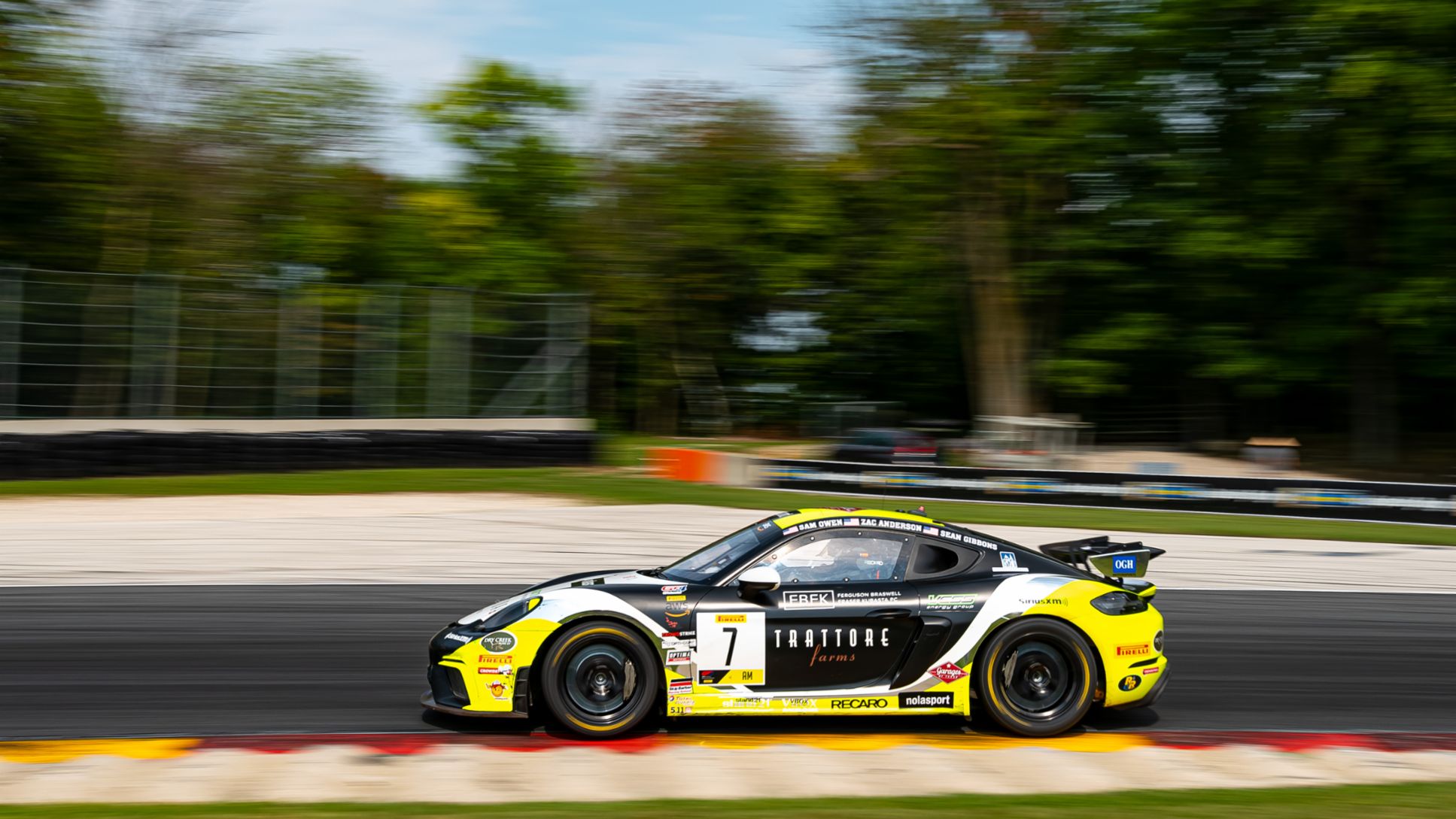 With two event weekends remaining in the 2020 season of the SRO GT World Challenge America and SRO GT4 America championships, points are becoming the focus for contenders while wins remain the only target for others.

In the single driver, 50-minute GT4 America Sprint rounds at Road America, Spencer Pumpelly (Atlanta, Georgia) returned the No. 66 TRG Porsche 718 Cayman GT4 Clubsport to the winner’s circle. The veteran driver and team have been podium finisher and contenders throughout the season but it had been since the first race back after the COVID-19 lockdown – VIRginia International Raceway – that the team had last visited victory lane. The program continues to look toward the 2020 SRO GT4 America Sprint Championship title for Drivers, Team and Porsche.

In Wisconsin, the No. 7 Nolasport Porsche 718 GT4 Cayman Clubsport of Zac Anderson and Sean Gibbons continued their winning ways in the Am class earning two victories in the three 60-minute SprintX races.

Fred Poordad, Driver, No. 20 Wright Motorsports Porsche 911 GT3 R.
“The team did a great job of giving us a car that was really competitive. Max drove outstanding in both races. In race one we both did a good job but in race two I was ailing a little bit and we weren’t able to cap off what was an amazing first stint by Max. It was a great team effort but we have some things left to work on going forward.”

“We had pretty close to a perfect weekend."

Max Root, Driver, No. 20 Wright Motorsports Porsche 911 GT3 R.
“We had some steam rolling in to Road America from Sonoma. We were excited to get on track and everything went smoothly all weekend. We had a great showing on Saturday with good speed for both of us and the car had a lot of speed. On Sunday we had a good first stint but we had a few issues during the second stint. Overall it was a good weekend and we are going to walk away with some points.”

Zac Anderson, Driver, No. 7 Nolasport Porsche 718 Cayman GT4 Clubsport.
“We had pretty close to a perfect weekend. I’ll lose a couple nights worth of sleep trying to figure out how we can optimize our driver change... you just never know when your next opportunity to win will come, so when you throw one away it’s tough. That was our only mistake all weekend. Hopefully we can get that dialed in for COTA, and potentially go for a ‘threepeat’ at our home track! Huge thanks to Porsche Fresno for getting us to Wisconsin, Sean Gibbons and OGH Motorsports for trusting me in their machinery and Nolasport for crafting an incredible Porsche race car. Jason Hart and Scott Besst are the wizards at this and I can’t thank them enough, either!”

Sean Gibbons, Driver, No. 7 Nolasport Porsche 718 Cayman GT4 Clubsport.
“Incredible weekend here at Road America! The Nolasport team did such a fantastic job and gave us an amazing Porsche Cayman GT4 Clubsport. Zac did a great job driving the car. For me, it was the fastest I’ve been here, so to come home with two wins and a second-place finish, and to increase our lead in the championship, was amazing. I couldn’t ask for a better weekend.”

Pascal Wehrlein (Germany) has completed his first miles behind the wheel of the Porsche 99X Electric race car. The new regular driver for the TAG Heuer Porsche Formula E Team took to the track for the first time in his new car during a two-day test in Germany. Porsche works driver André Lotterer (Germany) joined his new teammate for the first test following the German sports car manufacturer’s debut season in the all-electric racing series. They both completed an extensive program that provided the team with important findings regarding the development of the new powertrain planned for Season 7.

In total, Lotterer and Wehrlein covered 427.5-miles (688 kilometers) in the Porsche 99X Electric. The tests in Germany came just days after the end of the TAG Heuer Porsche Formula E Team’s rookie season and marked the start of preparations for the coming year. The first race of Season 7 is scheduled for January 16, 2021 in Santiago, Chile.

Amiel Lindesay, Head of Operations Formula E.
“It was a very successful first test – so soon after the end of our first Formula E season. We tested the powertrain for the coming year and made some valuable findings. Everything we have to sort for Season 7 is moving in the right direction. This is confirmed by both the data we have gathered and the feedback from the drivers. Details in the areas of hardware and software will make all the difference. We are on track, but still have a lot of work ahead of us. It was obviously also a nice moment to see Pascal Wehrlein sitting behind the wheel of the Porsche 99X Electric for the first time. He is coming in from a different team and brings his experience with him. His feedback was very positive and we are looking forward to working with him.”

André Lotterer, Driver, TAG Heuer Porsche Formula E Team.
"The break after the races in Berlin was a short one. It was an extremely productive test and, at the same time, it was interesting to see what experience Pascal has brought with him from his time in Formula E. The cooperation with him has been good and the development for Season 7 gives me great optimism.”

Pascal Wehrlein, Driver, TAG Heuer Porsche Formula E Team.
“The team has given me a warm welcome. I felt right at home from the word go. It was nice to be back in a Formula E car after almost six months away. It is a fantastic feeling to experience the acceleration and forces. There was obviously a lot for me to learn in a new team and with the new car. Generally speaking, I have a very good feeling in the Porsche 99X Electric. I must now continue to get used to everything.”