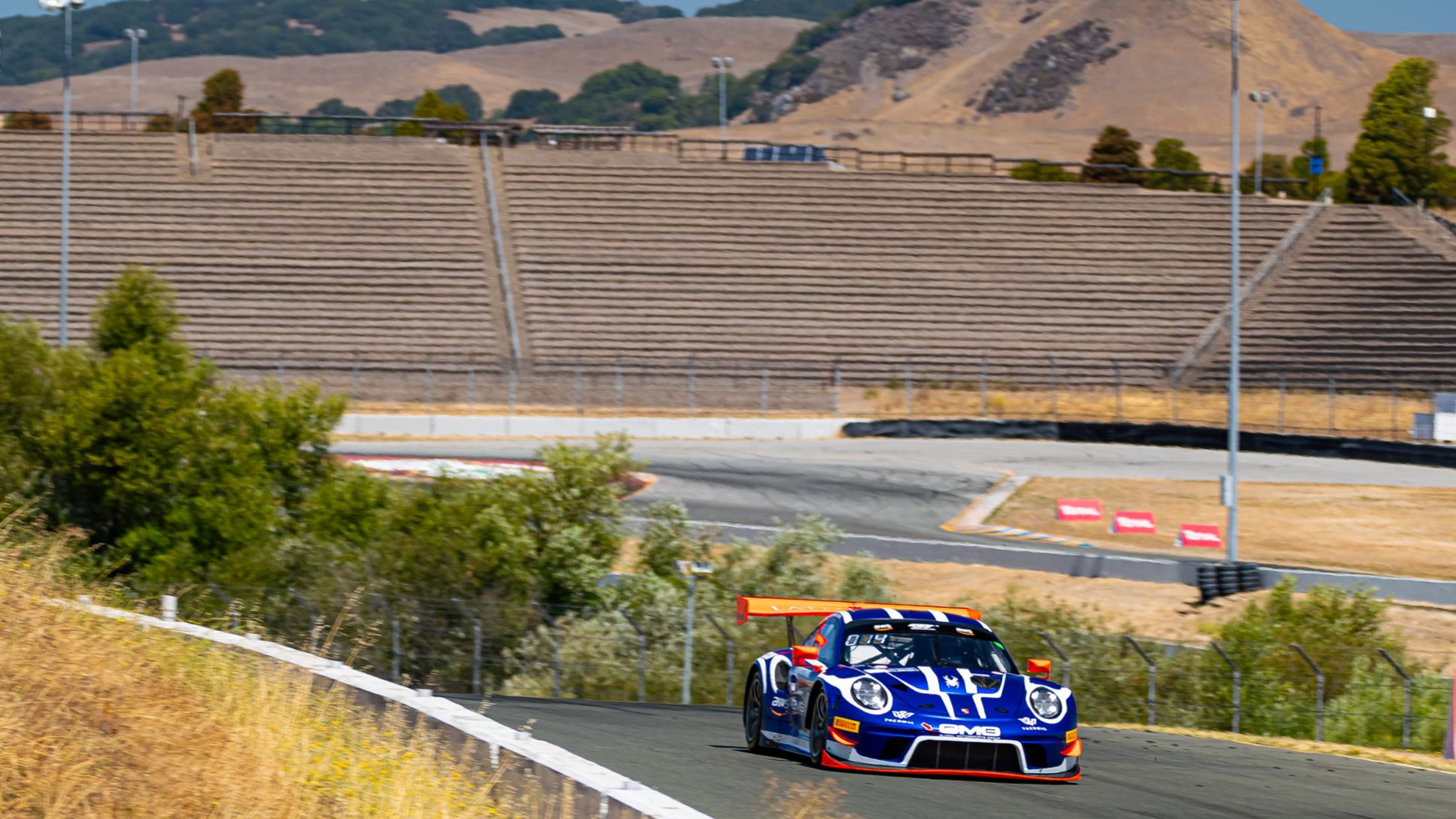 The James Sofronas-lead operation secured a Pro/Am class win in Race 2 of the GT3-spec race series – third-place overall – with the No. 14 GMG Porsche 911 GT3 R race car. GMG also swept both 40-minute races of the GT Sports Club Iron and Titanium categories using the Porsche 911 GT2 RS Clubsport to give the veteran race team a total of five class victories for the weekend.

James Sofronas, Driver/Team Principal, GMG Motorsports.
“What an unprecedented weekend. Running eight cars with over 12 drivers and an unbelievable staff supporting this effort. I can’t thank the entire team and crew for all the hard work to pull this off. With over 30 personnel supporting eight cars, we had multiple wins, podiums and a lot of success. A big part of that was Porsche Motorsport. I am very happy with the results but thoroughly enjoyed the camaraderie and the competition with my friends, who also happen to be my clients. That’s half the fun in racing; spending time with fellow competitors you enjoy racing with.”

Zac Anderson, Driver, No. 7 NOLASPORT Porsche 718 Cayman GT4 Clubsport.
“Amazing, amazing, amazing weekend. My first race weekend at Sonoma and the NOLASPORT / OGH Porsche 718 Cayman Clubsport was so balanced it made it possible for us to come away with two class victories and a second even in the low grip conditions. To accomplish that as a team with my friends and sponsors from Trattore Farms cheering us on was just incredible.”

After four races of the six-race 2019/2020 ABB FIA Formula E Championship season finale in Berlin, Germany, the TAG Heuer Porsche Formula E Team earned its fourth top-ten result. The “works” team claimed valuable points in the first two-thirds of the grand season finale with André Lotterer (Germany) earning a season high finish of second-place – the program’s second podium finish of the year – on Thursday, August 5. On Friday, August 6, the German factory driver finished in ninth-place and earned a fifth-place in the No. 36 Porsche 99X Electric on Saturday, August 8. He added an eighth-place finish on Sunday at the Berlin-Tempelhof circuit.

The last two races of the year will take place on a new track layout.

After four races in five days, drivers and teams now look forward to a short break before the season enters the final stretch on Wednesday, August 12 with the last race scheduled for August 13. In the meantime, the Berlin-Tempelhof circuit will be adjusted for the final double-header. The last two races of the year will take place on a new track layout.

The 2019-2020 season of the FIA World Endurance Championship (WEC) resumes after more than a 24-week break due to the coronavirus pandemic. On August 15, round six of the WEC will be held at Spa-Francorchamps in Belgium. Porsche tackles the six-hour race with two of the latest 911 RSR race cars. The defending world champions Michael Christensen (Denmark) and Kévin Estre (France) share the cockpit of the No. 92 car, with their teammates Richard Lietz (Austria) and Gianmaria Bruni (Italy) joining forces in the No. 91 Porsche. The factory squad returns to the internationally famous race facility with positive memories. Last year, Porsche claimed an early world championship title in the LMGTE-Pro manufacturer’s classification. Currently, the title defender ranks second in the class after five races. The customer teams Dempsey-Proton Racing, Project 1 and Gulf Racing field five of last season’s 911 RSR in the LMGTE-Am class at the series’ return to racing.

The Circuit de Spa-Francorchamps is located in the far east of Belgium close to the German border. Opened in 1921, the 4.35-mile (7.004-kilometer) racetrack featuring 21 corners undulates through the Walloon countryside – not surprisingly, the circuit is also known as the “Ardennes rollercoaster”. Fast turns like Raidillon, Eau Rouge and Blanchimont are as notorious as the La Source hairpin at the end of the start-finish straight.

The engineers in Weissach, Germany were able to improve the ca. 515-hp Porsche 911 RSR-19 compared to its extremely successful predecessor model primarily in areas of drivability, efficiency, ergonomics and serviceability. Approximately 95 percent of all components are new. The 911 RSR-19 is powered by a 4.2-liter, six-cylinder boxer engine.

After scoring second-place at four of the five rounds held prior to the lockdown, the reigning WEC champions Christensen and Estre rank third in the WEC drivers’ classification. Lietz and Bruni, the winners of the season-opening round in Great Britain, sit in fifth-place. The latest Porsche 911 RSR underlined its potential at the previous races of the 2019/2020 season with pole positions in Japan, China and Bahrain.

Practice for the event begins on Thursday, August 13 with additional practices and qualifying held on Friday. The six-hour race will take the green flag on Saturday, August 15 at 7:30 a.m. ET in North America, 1:30 p.m. CEST time in Belgium. Live coverage of the event can be seen in the United States on MotorTrend TV beginning at 7:00 a.m. ET.

Pascal Zurlinden, Director Factory Motorsport.
“The wait for the next round of the World Endurance Championship is now over. I’d like to pay a big compliment to the WEC organizers on successfully laying the foundations for the restart. In the upcoming races, we still have the best chances to defend our titles. Preparations for the final rehearsal before the 24 Hours of Le Mans went well. We’re aiming to score our second win of the season at Spa-Francorchamps.”

Alexander Stehlig, Head of Operations FIA WEC.
“We were able to use the compulsory Corona-related break to work through many details and we’ve also completed successful test drives. We’ve further improved the drivability and the balance of the 911 RSR and honed the team’s processes. In the first race after the long break, it’s important that we get back to our usual routine quickly. We want to earn as many points as possible in Belgium and we aim to win.”

Richard Lietz, Driver, No. 91 Porsche GT Team Porsche 911 RSR.
“We can finally contest the WEC again – but unfortunately without any spectators. Still, the main thing is to compete again. Everyone in the team feels highly motivated and wants to achieve a good result. We’re heading to Spa very well prepared. The podium is our minimum target.”

Gianmaria Bruni, Driver, No. 91 Porsche GT Team Porsche 911 RSR.
“Spa-Francorchamps is one of my favorite racetracks on the WEC calendar. I can hardly wait to finally race again. Richard Lietz and I are eager to achieve more race victories and podium results with the new 911 RSR. Because of the COVID-19 pandemic, we have to be careful and comply with the guidelines, but we’re very well organized in this respect, as well.”

Kévin Estre, Driver, No. 92 Porsche GT Team Porsche 911 RSR.
“We had a crazy race at Spa last year with snow, rain and sunshine. Still, we reached the podium and managed to secure the manufacturers’ title for Porsche – that was fantastic. Obviously, everything will be very different this year. We’re competing at a different time of the year and it’s the first WEC round after the coronavirus break. We’ll miss the spectators and we’ll all be wearing facemasks. With the new 911 RSR, we want to move closer to the top of the championship.”

Michael Christensen, Driver, No. 92 Porsche GT Team Porsche 911 RSR.
“It’s important that we come back strong after such a long break. We’re still in the running for the title and we want to catch the championship leaders. During the break, we tried to keep in touch with each other and give good feedback so that we could continue to improve. We went testing with the new 911 RSR. It felt good to work with the Manthey squad again and to prepare for the races at Spa and Le Mans.”

Matt Campbell, Driver, No. 77 Dempsey-Proton Racing Porsche 911 RSR.
“I’m looking forward to competing in the WEC again with Christian Ried and Riccardo Pera. We want to push hard to achieve another top result and put the team on the podium.”