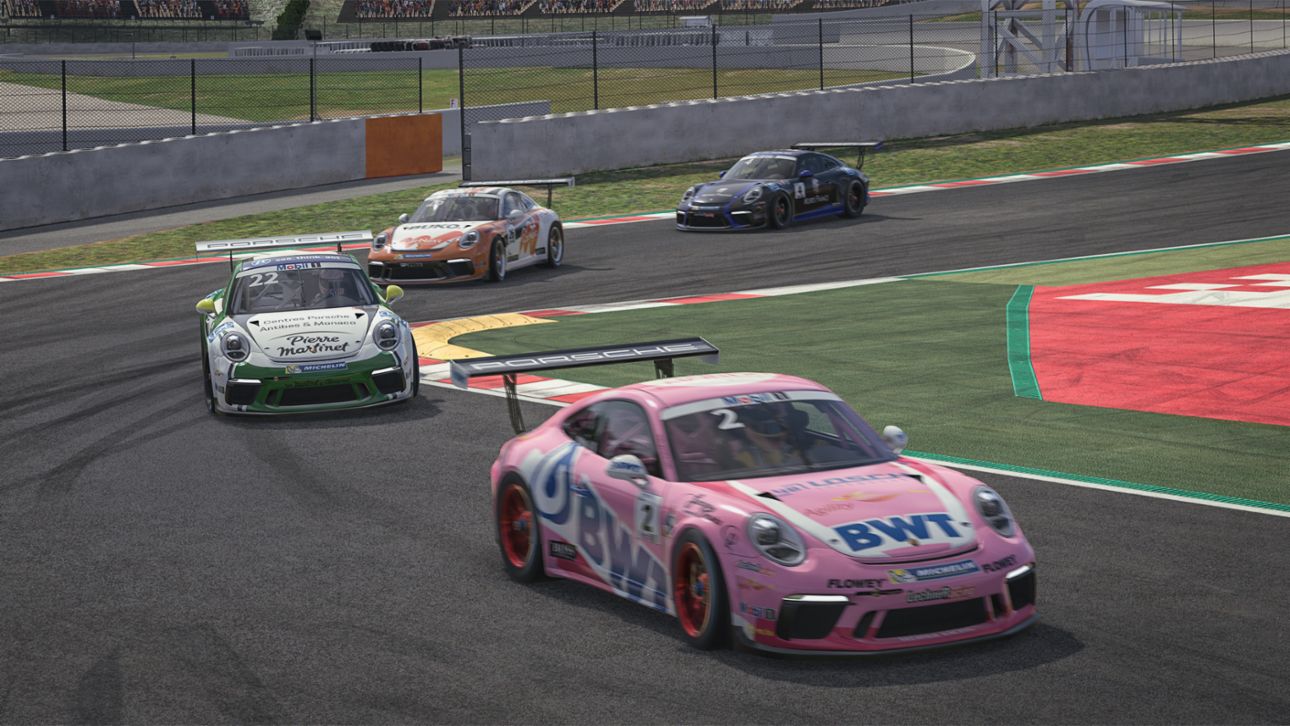 At the action-packed opening event of the Porsche Mobil 1 Supercup Virtual Edition, Larry ten Voorde (The Netherlands) – driving the No. 26 Team GP Elite Porsche 911 GT3 Cup race car – and Porsche Junior Ayhancan Güven (Turkey) – driver of the No. 22 Martinet by Alméras Porsche 911 GT3 Cup – celebrated victories in the first two rounds of the one-make sim championship. Ten Voorde won the first of two races on the Circuit de Barcelona-Catalunya in Spain, with Güven claiming round two. A total of 31 drivers took up the virtual event in their 485 hp Porsche 911 GT3 Cup race cars. Joining the registered drivers for the real Porsche Mobil 1 Supercup on the grid were Porsche factory drivers and well-known professional pilots.

While the race cars and circuit were simulated through the iRacing platform, the many overtaking maneuvers led to accidents that resulted in a high number of retirements. Of the guest drivers entered in the race, only Sven Müller (Germany/ No. 83 Agility Management AG Porsche 911 GT3 Cup), Simona de Silvestro (Switzerland/ No. 89 ABB) and Nick Tandy (Great Britain/ No. 81 ExxonMobil Oil Corporation) were able to contend for victory against the seasoned Supercup specialists at the wheel of their virtual 911 GT3 Cup race vehicles.

The start of race one proved key. Starting the race from the second grid spot, ten Voorde managed to squeeze past pole-sitter Güven. An enthralling duel unfolded between the pair. In the final phase, the 22-year-old Güven made a last attempt to overtake the Dutchman in the final corner – however, ten Voorde fended him off to cross the finish line first.

"Now that was sensational racing, especially at the front of the field."

In the rookie category, American Jaden Conwright (Newark, California) piloted the No. 11 Dinamic Motorsport Porsche to the class victory in race one. Marc Cini (Australia/ No. 27 Team Australia) clinched the ProAm classification.

Race two also turned into a gripping battle for victory between ten Voorde and Güven – this time the Turkish Porsche Junior prevailed. Güven passed the Team GP Elite driver on lap one and took the checkered flag after 14 laps, two-seconds ahead of ten Voorde. Third-place again went to Pereira, with van Kuijk and Joey Mawson (Australia/ No. 7 Fach Auto Tech) finishing in fourth and fifth-place respectively.

After the season-opening event, Güven and ten Voorde are tied at the lead of the championship with 45 points each. Pereira ranks third with 34 points. Conwright finished in third-place of the rookie standings in race two giving the young Californian the lead in the season-long rookie championship leaving the first race weekend.

The next double-header round of the Porsche Mobil 1 Supercup Virtual Edition is scheduled for April 18, when the drivers will pit themselves against each other on the virtual Silverstone Circuit in Great Britain.

Larry ten Voorde, Driver, No. 26 Team GP Elite Porsche 911 GT3 Cup.
“That was so much fun. I’m thrilled to win the very first virtual Supercup race. Unfortunately, I made a couple of mistakes in the second race, which Ayhancan Güven used to his advantage.”

Ayhancan Güven, Driver, No. 22 Marinet by ALMERAS Porsche 911 GT3 Cup.
“That was a tough but fair fight with Larry ten Voorde. We’ve demonstrated just how exciting motorsport can be on a simulator. To kick off the championship with a win is fantastic.”

Jaxon Evans, Driver, No. 4 Momo Megatron Lechner Racing Porsche 911 GT3 Cup.
“My start in race two was really good and I was fighting for third-place. I spun, unfortunately. Still, it was great fun and I’m looking forward to the next races.”

Jaden Conwright, Driver, No. 11 Dinamic Motorsport Porsche 911 GT3 Cup.
“I thought the Porsche Mobil 1 Supercup Virtual Edition was a great event for Porsche to host during this time where we can't race in real life. All of us have been itching to get back into the competition, so this was the perfect event for us while we're all stuck at home.”

Richard Attwood, one of the most successful “works” racing drivers in Porsche AG, motorsport history celebrated his 80th birthday on April 4. 50 years ago, the British racing driver achieved the first overall victory for Porsche at the 24 Hours of Le Mans together with Hans Herrmann (Germany) in the iconic 917 race car.

Inspired by the car dealership run by his parents, Attwood developed a passion for motorsports at an early age. After racing in formula sport with Triumph and BRM, he first came into contact with the Porsche brand in 1967. Together with William Bradley, he finished in second-place at the Zeltweg Airfield Circuit in Austria driving a privately-owned Porsche 906 Carrera 6. Porsche hired Attwood for the World Sportscar Championship two years later in 1969. From that point, he was retained under contract as a factory, or “works”, driver. He raced in the World Championship for Makes in a Porsche 908/02, and was runner-up at both Brands Hatch and Watkins Glen together with Vic Elford. In the season finale in Zeltweg, he finished in third-place with Brian Redman in the Porsche 917. Together with Hans Herrmann, he took part in the Nürburgring 1,000 km endurance event driving a Porsche 908/03 in 1970 – finishing in second-place.

The first overall victory for Porsche at Le Mans is considered to be one of the greatest racing successes for the sports car manufacturer from Zuffenhausen, Germany. On June 14, 1970, Porsche achieved the first of its current record-setting 19 overall victories at the 24-hour classic. After 2,863-miles (4,607.811 kilometers), or 343 laps, Attwood and Herrmann crossed the finish line first in the legendary No. 23 Porsche 917 KH entered by Porsche Salzburg. “Unlike what many people may think, I never did any testing in the 917. I drove a 917 for the first time in a qualifying race in 1969,” says Attwood looking back. “In 1970 I did not believe for a minute that we had even the slightest hope of winning.”

In 1971, he achieved another victory in the 1,000-kilometer race at the Österreichring. Attwood retired from active motor racing at the end of the season at the age of just 31. His last podium finish was in 1971, driving with Derek Bell in the 917 KH at the season finale of the World Sportscar Championship in Watkins Glen (third-place). However, the now 80-year-old was not quite ready to fully enjoy his retirement. In 1984, he finished 15th in Daytona in a Porsche 928.

Today, Attwood still accompanies the Porsche Museum to its driving events at renowned classic car meets all over the world. Among other things, he can be seen at the Festival of Speed in Goodwood, the Sound Night as well as at various historic motorsports events. He was an honored guest of Porsche Cars North America at the Rennsport Reunion VI in 2018.