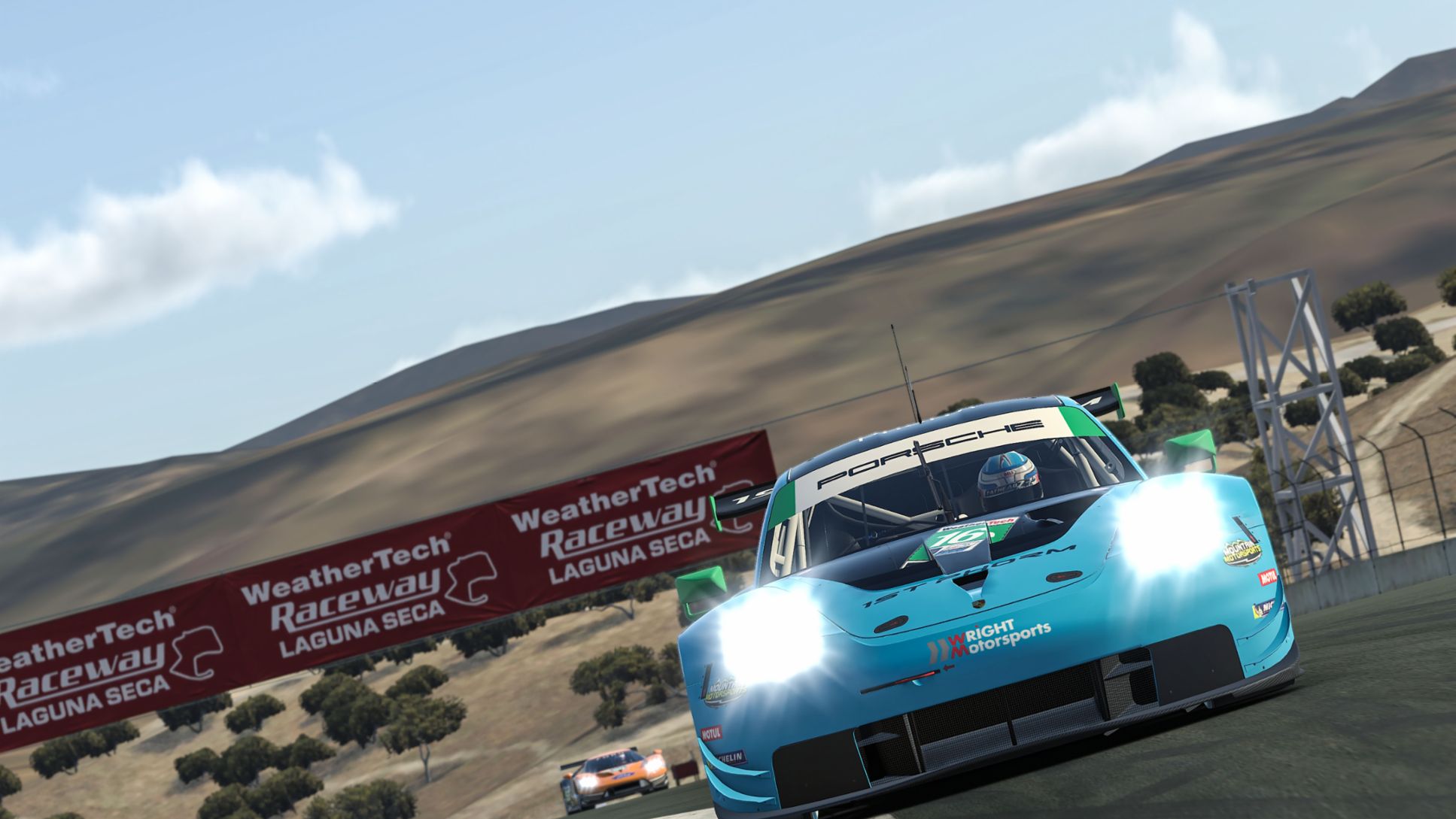 Ayhancan Güven (Turkey) made an impressive North American debuted, albeit virtually, with a top-five finish in round two of the IMSA iRacing Pro Series. The Porsche Junior delivered a strong performance in the No. 913 virtual Porsche 911 RSR at the simulated WeatherTech Raceway Laguna Seca finishing in fifth-place. The 90-minute race campaigned on the iRacing platform brought out 11 digital Porsche 911 RSR to the famous track in the hills of Monterey, California. Among the 47 entries, three Porsche factory drivers: Patrick Long (Manhattan Beach, California), Nick Tandy (Great Britain) and Laurens Vanthoor (Belgium) joined Güven, as well as Porsche Test and Development Driver Lars Kern (Germany). Unfortunately, several of the “works” drivers became entangled in incidents and were unable to place higher in the final standings.

Güven gave a clear demonstration of his talent as a simulator driver during practice with fast laps on a track he has never raced on in real life. However, in the short 10-minute qualifying session, the Porsche Mobil 1 Supercup racer was hampered by heavy traffic while attempting a flying lap and started the race in 13th-place. Thanks to a systematic and cautious approach, the Turk worked his way up the order and was, at times, running in fourth-place and contending for the win. Ultimately, tire wear on the highly realistic simulation prevented him from his bid for a podium result.

Works driver Vanthoor and Tandy – full time competitors for the Porsche GT Team on the IMSA WeatherTech SportsCar Championship GTLM class on which the iRacing Pro Series is based – were involved in several accidents during the race and were categorized in 23rd and 25th-positions respectively. North America’s only Porsche factory driver Patrick Long, who streamed his race in the simulator live, took the checkered flag in position 32 driving the No. 45 Hagerty Wright Motorsports digitalized machine.

Kern ran close behind Vanthoor and Tandy finishing in 26th-position in the virtual Pfaff Motorsports Porsche 911 RSR. Cody Ware (No. 51) was awarded 33rd finishing spot while Wright Motorsports regular, and full-season teammate to Long, Ryan Hardwick (Atlanta, Georgia) raced the No. 16 to 44th-position after his system disconnected from the event.

Round three of the IMSA iRacing Pro Series will be contested on April 30 at the virtual Mid-Ohio Sports Car Course in Lexington, Ohio.

Ayhancan Güven, Driver, No. 913 Porsche GT Team Porsche 911 RSR.
“That was an exciting and intense race, but I’d hoped to do better. Unfortunately, I wasn’t able to secure a good grid spot due to the heavy traffic in qualifying. I managed to make my way up the field from position 13, but I could definitely have done more. I’m already looking forward to race three in two weeks. I’ll go all-out again and I’ve got my eye on the podium.”

Nick Tandy, Driver, No. 911 Porsche GT Team Porsche 911 RSR.
“It’s a shame because I’d worked out a good strategy. After the mandatory yellow phase midway through the race I wanted to attack with fresh tires, but it was all for nothing because another competitor nudged me before the restart and my car ended up on its roof. Congratulations to Ayhancan on his strong performance.”

Laurens Vanthoor, Driver, No. 912 Porsche GT Team Porsche 911 RSR.
“I’d done some intensive preparation work, but it was of little use. I didn’t even get a clean qualifying run, so I had to start far down the field. After just two laps of the race, someone hit the rear of my car, and that was the end of my chances. Sim racing takes a lot of practice and training. I still have some catching up to do.”

Riley Dickinson, Driver, No. 53 Moorespeed Porsche 911 RSR.
“First of all, I’m extremely thankful to have been given the opportunity to compete in the IMSA iRacing Pro Series. The level of competition was very high which I feel led to a great race to watch for the fans. It was really cool to be on the same track for the first time with many of the top IMSA drivers, even though it was virtually. I’m very much looking forward to the next round at Mid-Ohio because this one was an absolute blast!”

Patrick Long, Driver, No. 45 Hagerty Wright Motorsports Porsche 911 RSR.
“It was certainly an eye-opening experience to join my first pro sim race. I had modest expectations, but even those were quickly reset when I entered the official practice session and experienced what the frontrunners can do out there. I love where the esports racing has progressed to; and it’s damn humbling. Now it’s time to get to work. I aim to take a good chunk of the learning curve and get that out of the way between now and Mid-Ohio. My race engineer at Wright Motorsport is an avid gamer and he’s going to help me, remotely, to get my home sim finalized so we can log some testing miles for the next round.”

The second race day of the Porsche Mobil 1 Supercup Virtual Edition was marked by spectacular duels between Porsche Junior Ayhancan Güven (Turkey) in the No. 22 Martinet by Alméras virtual Porsche 911 GT3 Cup race car and Larry ten Voorde (Netherlands) in the No. 25 of Team GP Elite. The pair ultimately claimed one race victory each in the dual 25-minute races. Güven won the third race of the season in the digital edition of the Porsche Mobil 1 Supercup at the British Silverstone Circuit, with ten Voorde crossing the flag first at race four in his digitally re-created 485 hp Porsche 911 GT3 Cup race car. In both rounds, the victories were preceded by action-packed fights. Newark California’s Jaden Conwright continued to impress in his rookie season finishing in seventh and eighth-places in the two rounds, respectively. He is currently ranked in second-place of the series’ Rookie Standings driving the No. 11 Dinamic Motorsports Porsche 911 GT3 Cup race car. Thirty-one drivers contested the event on the iRacing online racing simulation.

After turning the fastest lap in qualifying, Güven started the first 25-minute race from pole position. In a turbulent early phase with several collisions, ten Voorde, however, kept his cool and snatched the lead. The pair broke away from the field and battled among themselves for the lead to the last lap. Shortly before the flag, Güven made the decisive move, both vehicles touched, sending the GP elite driver ten Voorde into a spin. Güven swept over the finish line ahead of the 23-year-old Dutchman.

Behind the two youngsters, a duel for third-place treated viewers to plenty of action. Max van Splunteren (Netherlands) underlined his skill in the fight against Porsche factory driver Nick Tandy (Great Britain) making a VIP entry in the official Porsche Mobil 1 Supercup series piloting the simulated No. 81 ExxonMobil Oil Corporation Porsche 911 GT3 Cup racer. At his home race, the 24 Hours of Le Mans overall winner initially searched in vain for a gap, eventually found it on lap seven and took the flag in third-place. Finishing in fourth-place overall, the 24-year-old van Splunteren won the rookie class. The ProAm classification went to Stephen Grove (Australia).

Race two of the Porsche Mobil 1 Supercup Virtual Edition on the 3.66-mile (5,891-kilometer) race track was characterized by a dramatic final phase. Frontrunner Güven defended himself against ten Voorde’s repeated attacks over the distance, however, on the final lap the 22-year-old Turkish driver had to lap a slower vehicle. Ten Voorde grabbed his chance, squeezed past and won the race.

"That was an exciting race day with a lot of spectacular action. I really put the pressure on during the entire second race." Larry ten Voorde

The double-header event for Porsche Junior Jaxon Evans (New Zealand) driving for the Orlando, Florida-based Momo Megatron Lechner Racing proved tumultuous. The youngster finished race one in fifth-place followed by a sixth in the second event.

In the overall rankings, Güven and ten Voorde continue to share the lead with 90 points each. Races five and six of the Porsche Mobil 1 Supercup Virtual Edition will be contested on April 25, with the drivers battling for honors on the virtual Circuit de Spa-Francorchamps in Belgium. The real Porsche Mobil 1 Supercup made its debut on the 4.35-mile (7.004-kilometer) race track in 1993. The tradition-steeped circuit is famous for its fast corners Eau Rouge and Blanchimont as well as the hairpin corner La Source.

Ayhancan Güven, Driver, No. 22 Martinet by Alméras virtual Porsche 911 GT3 Cup.
“My start wasn’t great [in race one], but afterwards I was really fast and was rewarded for it. In terms of the championship, it was great race day for me.”

Larry ten Voorde, Driver, No. 25 Team GP Elite virtual Porsche 911 GT3 Cup.
“That was an exciting race day with a lot of spectacular action. I really put the pressure on during the entire second race. In the end, it paid off. Still, I had a bit of luck on my side in the final lap.”

Jaxon Evans, Driver, No. 4 Momo Megatron Lechner Racing virtual Porsche 911 GT3 Cup.
“I started race one from position three which was a great grid spot, but then I made a few mistakes. In the second race, I spun early and lost several positions. But I managed to fight my way back and earn some important points.”

Alex Job Racing (AJR), known best for over 70 sports car racing victories, has transitioned from the competition business to AJR Restorations. The company, based in Tavares, Florida, came a long way from its start in a two-car garage in 1988 when Alex Job had a dream and convinced wife Holly it was a good idea to go sports car racing. The family-run operation became one of the most well-respected Porsche entrants in the world during the 1990s and first two decades of the 2000s amassing wins and championships with Porsche “works” drivers and customer pilots.

Theo Ruijgh, who is well versed in performance, will lead the new AJR Restorations business. He is an accomplished vintage Porsche racer and is president of TRI Aviation which specializes in servicing the T56 military engine that powers the C-130 military aircraft.

Alex Job, Principal, Alex Job Racing.
"Since we stopped racing three years ago, we have kept the shop and a group of dedicated employees led by Ken Davison working on restoring historic Porsche race cars. We wanted to find a way to keep that aspect of the business going and thanks to Theo Ruijgh that will happen. Theo, along with Ken, has taken ownership to keep the restoration business working as AJR Restorations. I will no longer be involved in the day-to-day operation, I will keep my office at the shop, but will also be traveling the U.S. visiting race tracks and helping to keep the shop busy."

Theo Ruijgh, Principal, AJR Restorations.
"I am proud to carry on the legacy of quality craftsmanship with Ken that Alex and Holly have built up over the years. We have a full-service shop here in Tavares that has the ability and passion to restore race cars to better than new condition. AJR Restorations is committed to keeping the past alive with the same attention to detail that amassed those 70 sports car wins."