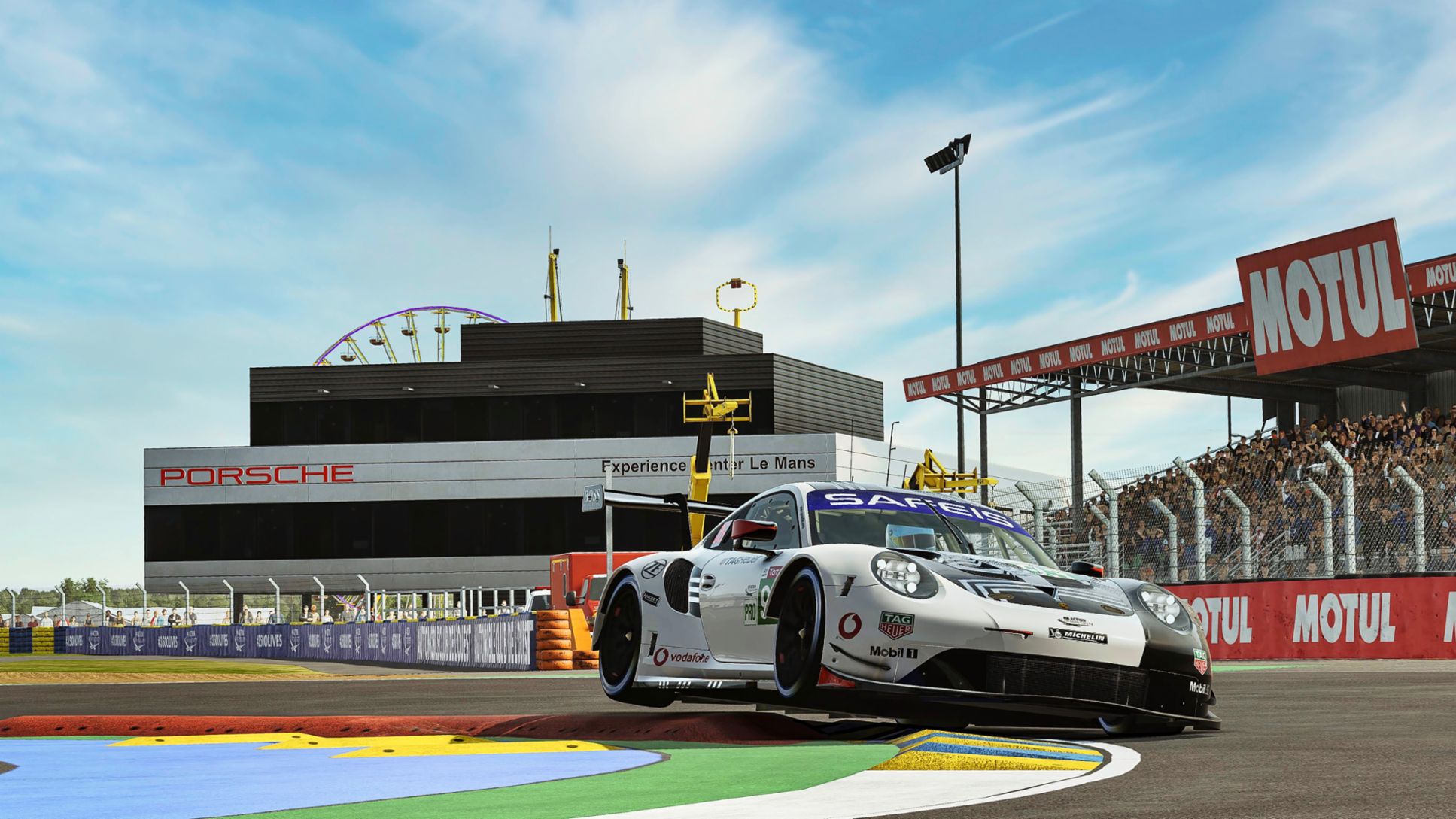 The newly founded Porsche Esports Team has won the first edition of the virtual 24 Hours of Le Mans. In the hands of works driver Nick Tandy (Great Britain) and Porsche-Junior Ayhancan Güven (Turkey) as well as the professional sim racers Josh Rogers (Australia) and Tommy Östgaard (Norway), the digital version of the 2017-spec 911 RSR took the checkered flag in first-place on the 8.47-mile (13.626-kilometer) Circuit des 24 Heures after a total of 339 laps. After a flawless marathon sprint twice around the clock, the No. 93 Porsche Esports Team earned the victory with a one-lap lead over the second-placed entry in the GTE class. Exactly 50 years after the German marque’s first overall victory at Le Mans, the quartet now adds to the success of Hans Herrmann and Richard Attwood earned on June 14, 1970. It was then that the German-British driver duo won the 24 Hours of Le Mans at the wheel of the now legendary Porsche 917 KH. With a total of 19 overall wins at the grandfather of all endurance races, Porsche has notched up more victories than any other manufacturer to date. Due to the coronavirus pandemic, the virtual edition of the race was run on the traditional June date while the real-world Le Mans 24 Hours has been postponed to the weekend of September. 19 – 20.

Porsche tackled the digital event with four virtual 911 RSR race cars. Each “car” was crewed by two real racing drivers from the Porsche system and two esports professionals from the Coanda Simracing team. From the beginning of the race – which had qualifying on Friday, June 12, and the race start on June 13 – the driver crew of the No. 93 proved particularly competitive. After a strong start for Dempsey-Proton’s No. 88 Porsche 911 RSR, Tandy – the overall winner of the 2015 Le Mans – handed the No. 93 off to Östgaard and after approximately four hours, they swept into the class lead. Putting in a remarkably steady drive, both Güven and Rogers extended their lead, and not even two pit stops due to technical problems could halt their charge. With the sun rising on June 14, 20-year-old Rogers turned the fastest race lap for the GTE class with a time of three-minutes, 48.203-seconds. Sweeping pole position, fastest race lap and the class win for the No. 93.

The No. 92 Porsche 911 RSR was also on a steady course for a podium spot, before the driving team of “works” driver Matt Campbell (Australia), Porsche-Junior Jaxon Evans (New Zealand) and sim racers Mack Bakkum (Netherlands) and Jeremy Bouteloup (France) fell victim to a server error approximately an hour before the end of the race. They finished in 11th-position of the GTE class.

Another candidate for a top-three finish was the No. 91 car, driven by the two Porsche Formula E factory drivers André Lotterer (Germany) and Neel Jani (Switzerland) as well as American Mitchell de Jong (Orange County, California) and Martti Pietilä (Finland). After running in the top-four until the early hours of the morning, a server problem while changing drivers cost valuable time as they approached the final third of the race. They would finish in 12th-position.

Bad luck plagued works drivers Simona de Silvestro (Switzerland) and Patrick Pilet (France) as well as sim racers Martin Krönke (Germany) and David Williams (Great Britain). De Silvestro became entangled in an accident after only 30-minutes and fell deep into the field. A crash midway through the race then ended their race.

Fritz Enzinger, Vice President Porsche Motorsport.
“In the virtual world of racing, as well, meticulous preparation and total concentration over more than 24 hours contributed to this great result. My heartfelt thanks to Marco Ujhasi, the drivers and the entire Porsche Esports Team.“

Pascal Zurlinden, Director Factory Motorsport.
“That was a dream weekend for Porsche – what better way is there to celebrate the 50th anniversary of Porsche’s first overall victory at Le Mans than to win the GTE class at the inaugural edition of the virtual 24-hour race? Congratulations to all drivers and particularly to the crew of the No. 93 Porsche 911 RSR. My sincere thanks as well to the fledgling Porsche Esports Team. The hard work of the last days and weeks has paid off. Congratulations as well to the ACO and the WEC for organizing such a great event within just a few short weeks. Our endurance fans couldn’t have wished for a better replacement for the originally planned real Le Mans race. This event made us even more eager to tackle the postponed race in September.”

Marco Ujhasi, Manager Esports Porsche Motorsport.
“I’m particularly proud that we were able to win as the Porsche Esports Team today. For me and many others, the story behind it began years ago: in 2013 we won Le Mans with the 911 RSR on the occasion of the 50th anniversary of the Porsche 911. In 2018, the victory coincided with the 70 Years of Porsche Sports Cars‘ celebration. And now, exactly 50 years after Porsche’s first overall Le Mans victory, we secured the GTE class win at the inaugural virtual edition. This was not only thanks to the four drivers in the number 93 car but also to a 30-strong team. And we also have to acknowledge our partners, Coanda Simsport and Peter Dimov, the founder of the Virtual Racing School, for this great success. Thank you so much. And now we’ll celebrate. In real-life.”

Nick Tandy, Driver, No. 93 Porsche Esports Team Porsche 911 RSR.
“This win is balm for the soul. We have some very difficult months behind us. The long break without real racing was and is a real strain for everyone at Porsche Motorsport, as well as for the fans and the drivers. For this reason, the virtual 24 Hours of Le Mans was a brilliant initiative to revive motor racing. On this very day five years ago, I climbed to the top step of the podium as the overall Le Mans winner. Now to win the virtual race, it doesn’t get much better!”

Ayhancan Güven, Driver, No. 93 Porsche Esports Team Porsche 911 RSR.
“That was pretty nerve-wracking in the final hours, I hardly dared to look, but it all went well. Victory feels great, especially since we’ve had some extremely exhausting weeks of preparation. The perfect teamwork paid off, and we deserve this win. We were definitely the fastest GTE vehicle in the field throughout the race. My first win at Le Mans is a virtual one – hopefully, I’ll be able to compete in the real race one day.”

Joshua Rogers, Driver, No. 93 Porsche Esports Team Porsche 911 RSR.
“I don’t know what to say – we put so much work into this project over the last few weeks. It’s a massive team effort. Our weekend started very well with pole position. This allowed us to keep out of trouble at the start of the race and then we only had to turn our laps. We also managed to avoid mistakes when lapping slower cars and we tried to build on our lead as much as possible. Our strategy worked perfectly.”

Tommy Östgaard, Driver, No. 93 Porsche Esports Team Porsche 911 RSR.
“This was an incredible race; everything ran perfectly for our car from start to finish. We were unlucky with the two red flags, but we’d prepared for every situation and stayed cool. Everyone at Porsche and Coanda made an incredible effort to ensure we could pull it off in the end. We were the quickest car and we made no mistakes. Once again, Porsche is writing Motorsport history, and I couldn’t be more proud to be part of it.”

Jaxon Evans , Driver, No. 92 Porsche Esports Team Porsche 911 RSR.
“Wow, what an event – from the intensive four-week preparation window to the final hours of the race itself. It was a privilege to start the race in the number 92 Porsche Esports Team entry. We knew we had the speed across all team members to be within podium contention come Sunday afternoon. Unfortunately, with 90 minutes remaining, we had a network failure – taking us out of podium contention. Surviving the chaos proved to be difficult, we had everything thrown at us – but we continued to fight on. A massive applause to not only the number 92 crew – but everyone behind the scenes!”

André Lotterer, Driver, No. 91 Porsche Esports Team Porsche 911 RSR.
“I was really excited to contest the virtual 24 Hours of Le Mans and was impressed by how realistic it was and also by the new Porsche Esports Team. It was very professional. I learned a lot from the esports world. Unfortunately, things didn’t go so well for us because a few glitches on the sim platform threw a spanner in the works. A podium result would have been within reach. Driving was great fun, although sometimes it wasn’t easy. I think I’d do it again.”

Simona de Silvestro, Driver, No. 94 Porsche Esports Team Porsche 911 RSR.
“We got off to a good start but unfortunately an ex-Formula 1 world champion shunted me off the track after just 30-minutes. The repairs needed to get us back on track cost us 90-seconds. There was a heavy thunderstorm at my home in Switzerland overnight. The result: my internet connection dropped out and it took me five-minutes to get back on the server. We were running far behind when Patrick ended up in the gravel and got stuck. Unfortunately, there are no virtual salvage vehicles in the simulation, so our race ended early. What a shame.”