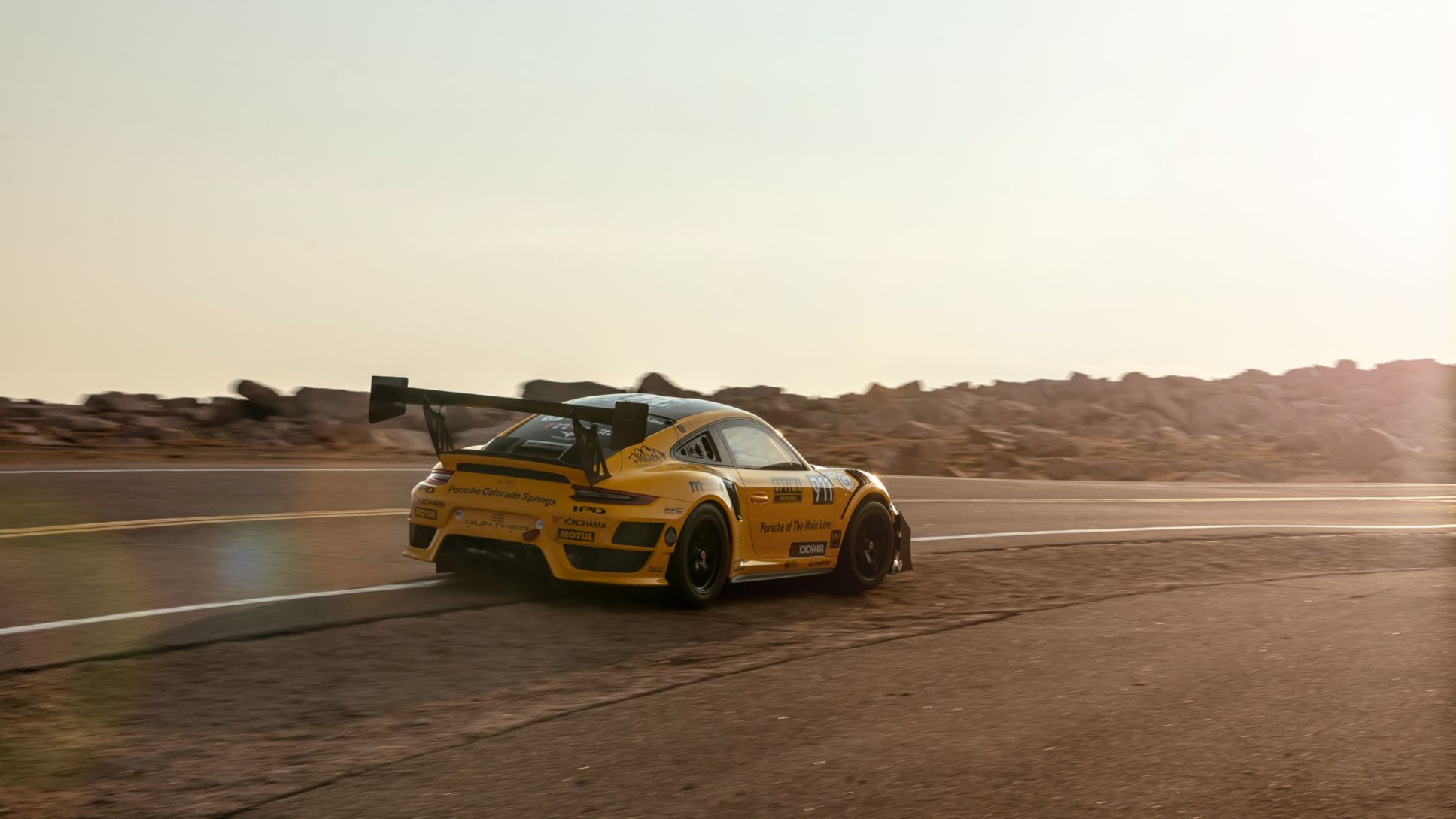 Time to Attack. Trio of Porsche Track Cars To Battle One Another and Pikes Peak.

The 98th Running of the Pikes Peak International Hill Climb is scheduled for August 30 in Colorado Springs, Colorado.

It is not unusual to see the names David Donner, David Donohue and Jeff Zwart on an entry list at the Pikes Peak International Hill Climb, each has won on “America’s Mountain” and the accomplishments of each is well known and easily envied. What is more enticing is to see the trio facing down one-another head-to-head, all in the same division – Time Attack 1 – and all racing similar Porsche track-only cars based on the Porsche 911 GT2 RS road car. But Pikes Peak is about more than “just” the cars you are facing in your division, in fact, the competition is almost secondary because first you must beat the 12.42-mile, 156-turn race course up to the 14,115-foot high finish line. Porsche currently holds the Time Attack 1 division record – under the previous regulations – with a run of nine-minutes, 23.721-seconds set by Raphael Astier (France) driving a Porsche 911 GT3 Cup race car modified with a turbocharged engine in 2019.

With regulations changed for 2020, the competition-only machines from the German sports car manufacturer have now become the hot property for the class. The proposition of charging a machine built by the factory for race track-use only in the “Race for the Clouds” was too much for the three veteran drivers to pass up. David Donner (Colorado Springs, Colorado) will pilot the No. 000 Porsche 911 GT2 RS Clubsport “art car” up the Colorado mountain searching for his seventh Pikes Peak victory – he currently holds three overall and three class wins. Donner is the last American to earn “King of the Mountain” honors, a designation which goes to the driver who sets the quickest outright time each year. Donner has worn the crown three times. The attraction of the Time Attack 1 Division in a Porsche drew him back behind the wheel. The Porsche-Donner connection is strong as David’s father, Robert, Jr., raced the venerable Porsche RSK to three titles (1959 – ’61) and an RS-61 to a division win in 1962. The livery on Donner’s contender was conceived by 000 Magazine – a Porsche-focused quarterly publication – creative director Justin Page. Donner is a 2016 inductee into the Pikes Peak Hill Climb Museum Hall of Fame.

As a 2018 inductee into the Pikes Peak Hall of Fame, Jeff Zwart (Aspen, Colorado/Long Beach, California) and Donner mark the only Hall of Famers to return to competition following induction. The fact that they both have extensive Porsche backgrounds and have been drawn back into Time Attack 1 adds to the excitement of the 98th Running of the Pikes Peak International Hill Climb.

Zwart is an eight-time winner of the event (1994-’98, 2002, 2010, 2015), all in Porsche 911 models. While he has sat out the last two years to focus on his role as coach of the Porsche Pikes Trophy by Yokohama, like Donner, the allure of a competitive, turn-key, high-horsepower Porsche with proper driver aides was too much for the veteran to pass by. His familiar No. 11 will adorn the Porsche 911 GT2 RS Clubsport-based 935-19. It marks the first time a 935 – either the original sports prototype racer or the newest generation introduced in 2018 – has ever entered the historic hill climb event. Zwart will continue in his position overseeing and assisting the four competitors racing in the one-make division for the Porsche Cayman GT4 Clubsport. Zwart’s Porsche 935-19 is being prepped by E-Motion Engineering.

While David Donohue (West Chester, Pennsylvania) has not yet been invited to join the Pikes Peak Hall of Fame, he is revered as one of his generations great sports car racers with overall and class victories at the 24 Hours of Daytona and as champion of the 1994 IMSA Bridgestone Supercar series. Donohue won the Time Attack 1 Division in 2018. The popular driver is looking for the division’s best time in the No. 911 Porsche 911 GT2 RS Clubsport prepped by BBi Autosport. BBi prepared the machine veteran rally racer Astier drove to the record run last year.

The 98th Running of the Pikes Peak International Hill Climb is scheduled for August 30 in Colorado Springs, Colorado. While fans will not be able to attend due to COVID-19 precautions, the organizers have several methods to follow the event in place. Please visit: http://ppihc.org/how-to-follow-fans/ .