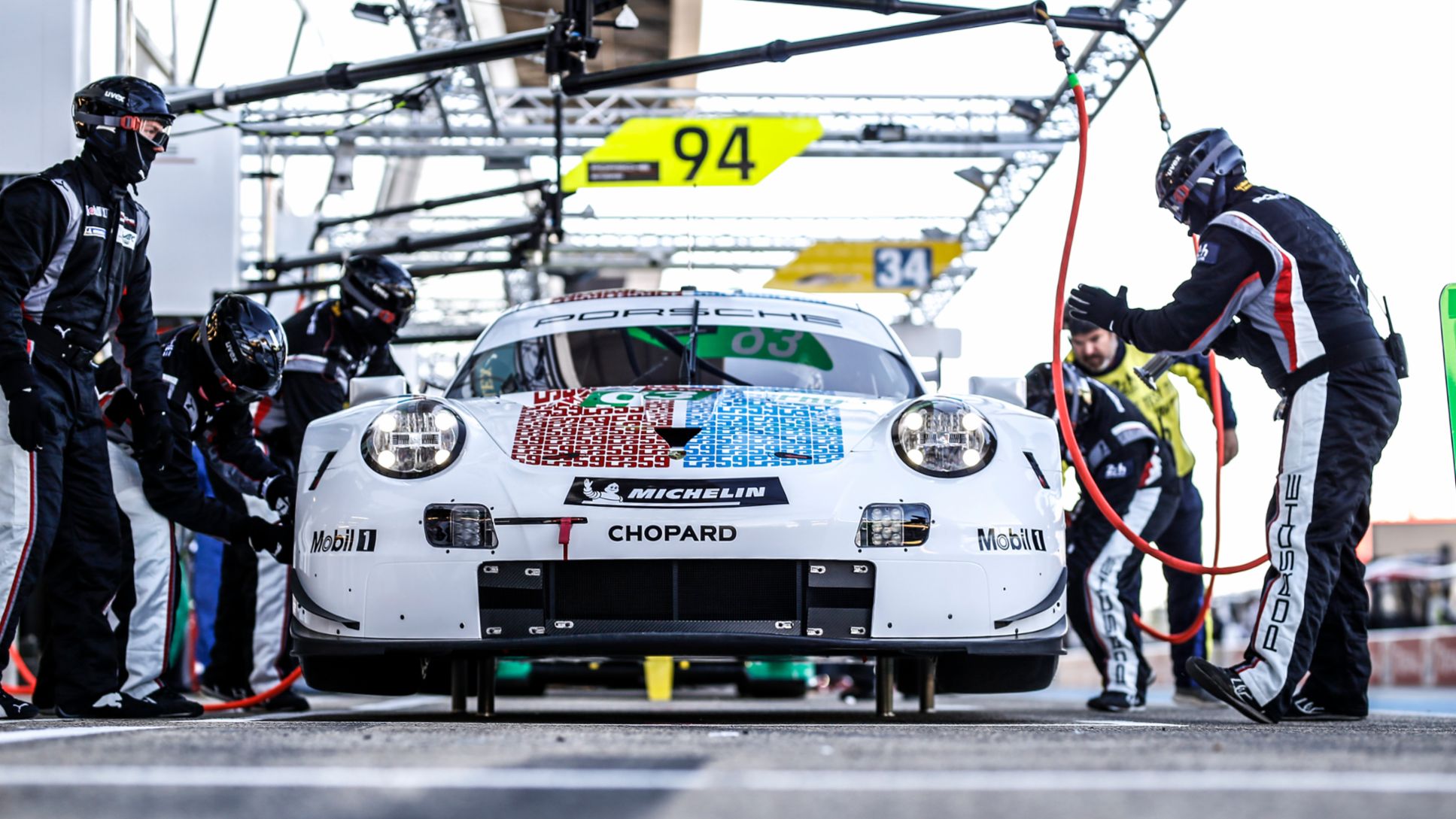 Park Place Motorsports will enter the lone customer Porsche 911 GT3 R in the Detroit Grand Prix with a fresh driver pairing of 2018 Porsche GT3 Cup Challenge Canada by Yokohama Champion Zacharie Robichon (Canada) and Porsche Factory Driver Patrick Long (Manhattan Beach, California) behind the wheel of the rear-engined No. 73 machine. The race is round two of the IMSA WeatherTech SportsCar Championship’s “Sprint Series” for GTD class cars. The 100-minute race for the GT3-spec machines will be contested on the 2.35-mile Raceway at Belle Isle Park street course laid out on the Detroit, Michigan-area island, May 31 – June 1

Team principal and endurance racing driver Patrick Lindsey (Santa Barbara, California) will forgo the Detroit race to be more prepared for the official 24 Hours of Le Mans Test taking place Sunday, June 2. His Team Project 1 Porsche 911 RSR currently leads the LMGTE-AM Championship in the World Endurance Championship (WEC) as it heads into the final race of the 2018/2019 Super Season in Le Mans, France. As he did in 2018, Lindsey is set to fly multiple IMSA competitors, including Long, to the Le Mans test as “Pilot in Command” of a Mira Vista Aviation operated charter. Lindsey is the owner and President of Mira Vista.

Patrick Long, Driver, No. 73 Park Place Motorsports Porsche 911 GT3 R.
“It will be great having Zach Robichon in the Park Place Porsche at Detroit. Zach has proven through the one-make Porsche Challenges to be a team leader and race winner. That’s translated well into his first few IMSA races this year. Detroit is a place with little room for error and very little track time, so we have to get right down to business and be as efficient with our time as any other race weekend all year.

“With the theme of tight timing, it’s a very compressed schedule. We get our race in at Detroit and jump in a plane to land Sunday morning thousands of miles away in Le Mans, France to go straight into another Porsche race car. We did it last year with our partners at Mira Vista, and it worked out well. So, I think we’ll be prepared to attack Le Mans on Sunday.”

Zach Robichon, Driver, No. 73 Park Place Motorsports Porsche 911 GT3 R.
“I’m very much looking forward to teaming up with Park Place Motorsports for the race in Detroit. It truly is a sprint race at only 100 minutes, but I’ll be looking to keep my nose clean as it is my first time on the streets of Belle Isle. I’ve had some success on street courses in the past, so I will be leaning on those experiences to get up to speed in Detroit.

“The team has done a great job this season, and hopefully I can help continue their success and aid them in their bid for the championship. It will be my first time teaming up with Pat Long, and that alone will be a great opportunity for me. I first met him a couple of years ago at the Porsche Young Driver Academy and learned a lot that time around, so I’m sure that will continue this weekend.”

Porsche Art. Wright Motorsports Plays Role in Upcoming Movie.
The theatrical trailer for the 20th Century Fox's adaption of international best-seller, “The Art of Racing in the Rain,” can now be seen online and in theaters. The movie will hit theaters on Friday, August 9, 2019. Porsche customer team Wright Motorsports played a significant role in the production of the film, which will feature the No. 58 Wright Motorsports Porsche 911 GT3 R.

In the summer of 2018, Wright Motorsports worked on the filming of the movie, which took place under the direction of former Wright Motorsports driver Patrick Dempsey and commercial/movie director, Jeff Zwart. Zwart is a longtime Porsche racer with eight-Pikes Peak Hill International Climb victories, all run in Porsche 911s.

The story is narrated by a philosophical dog named Enzo. Through a bond with his owner, Denny Swift – an aspiring Formula One driver – Enzo has gained tremendous insight into the human condition and understands that the techniques needed on the racetrack can also be used to successfully navigate the journey of life. The film will feature Kevin Costner voicing Enzo [the dog] and Milo Ventimiglia staring as Denny Swift. Amanda Seyfried will portray his spouse, while Martin Donovan plays her father.

The filming of the movie began in Vancouver, British Columbia, and rolled into the 2018 IMSA WeatherTech Championship round at Canadian Tire Motorsport Park. Throughout the event, the team's pit box doubled as a live movie set as the Wright Motorsports team and No. 58 Porsche 911 GT3 R took part in the shoot. Additionally, Patrick Long sported the helmet design of the lead character, Denny Swift during the race in an effort to collect in-car stunt footage for the film.

15 Days of Le Mans. Porsche Teams Ready for Sports Car Crown Jewel.While the start of the 24 Hours of Le Mans is still over two weeks away, sports car racing’s crown jewel will begin to unfold on June 2. The annual Le Mans “Test Day” is of such importance that it puts the North American IMSA WeatherTech SportsCar Championship GTLM class on hold until the “24 Hours” is over. Even many participating in the Grand Prix of Detroit WeatherTech race will depart the “Motor City” immediately after the checkered flag falls on Saturday’s GTD and Prototype class race and fly overnight to reach France in time for the first test laps of the Circuit de la Sarthe on Sunday.

Nine Porsche 911 RSR race cars – including four Porsche GT Team “works” machines – are scheduled to turn laps on the 8.467-mile race course in the World Endurance Championship’s LMGTE-Pro and LMGTE-Am classes. All four of the factory cars will be represented in the GTE-Pro category with the Nos. 93 and 94 being prepared by the North American arm of the Porsche program. IMSA GTLM class points leading driver Earl Bamber (New Zealand) will be joined by Mobil 1 Twelve Hours of Sebring-winning drivers Patrick Pilet (France) and Nick Tandy (Great Britain) in the No. 93. Mathieu Jaminet (France), Sven Müller (Germany) and Dennis Olsen (Norway) will pilot the No. 94 Porsche 911 RSR. The WEC effort has entered the Nos. 91 and 92 for the “Super Season” finale at Le Mans. The No. 91 of Richard Lietz (Austria), Gianmaria Bruni (Italy) and Sebring-winner Frédéric Makowiecki (France) make-up the first half of the two-car team while the No. 92 driver pairing of Michael Christensen (Denmark), Kévin Estre and Laurens Vanthoor (Belgium) come to Le Mans to defend their class win. Vanthoor – who has won the last two IMSA events with Bamber – will support Christensen and Estre in their attempt to lockdown the GTE-Pro Drivers’ title when the teams return for the race. Porsche won the constructors title at Spa-Francorchamps in early May.

Five customer teams – several with North American connections – bring the year-old Porsche 911 RSR to the GTE-Am group. The Pro-Am style class is led at the test – and in the season championship – by the No. 56 Team Project 1 car of Porsche factory driver Jörg Bergmeister (Germany) who is a familiar face in the IMSA paddock. With Bergmeister, Egidio Perfetti (Norway) and Patrick Lindsey (Santa Barbara, California), Team Project 1 leads the class Drivers Championship. Lindsey is the Team Principal and driver of the No. 73 Park Place Motorsports Porsche 911 GT3 R in the IMSA WeatherTech GTD class. This weekend he will forgo the seat in his machine at Detroit to focus on Le Mans testing. As a pilot, he will fly several of the drivers – including his Park Place driver Patrick Long (Manhattan Beach, California) – from Detroit to Le Mans, France for the test weekend.

As North America’s only Porsche factory driver, Long heads the No. 99 Dempsey-Proton Racing team with Tracy Krohn (Houston, Texas) and Nic Jönsson (Atlanta, Georgia) for the Le Mans Test Day and at the 24-hour classic on June 15 – 16. Dempsey-Proton, which is co-owned by Patrick Dempsey (Malibu, California) also fields the No. 77 for Matt Campbell (Australia), Christian Reid (Germany) and Julien Andlauer (France) as well as the No. 88 with Satoshi Hoshino (Japan), Giorgio Roda (Italy) and Matteo Cairoli (Italy). Proton Competition brings the No. 78 Porsche 911 RSR for Italians Louis and Philippe Prette along with Vincent Abril of France. The final Porsche in the GTE-Am class is the familiar Gulf Racing colors of the British driver trio of Michael Wainwright. Benjamin Barker and Thomas Preining.