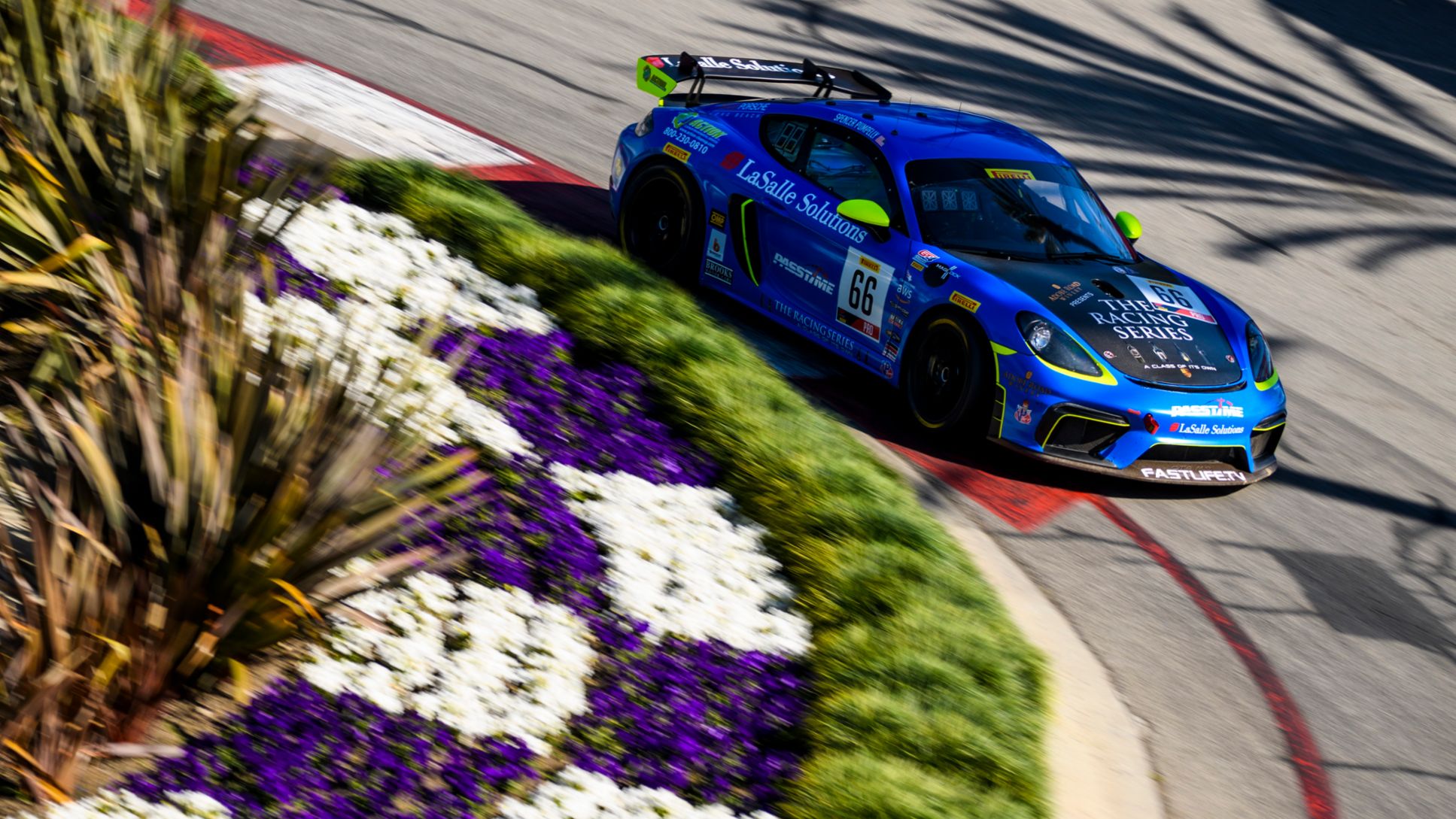 Porsche Profile.
Event Story Lines.
Street Performer. Porsche Extends Championship Lead with Long Beach Win.
The long-recognized special characteristics of the Porsche 911 RSR were on full display on the city streets of Long Beach, California over the weekend. The most advanced race variant of the iconic German sports car captured the GTLM class pole position on Friday and the victory in the third round of the IMSA WeatherTech SportsCar Championship one day later. Factory drivers Earl Bamber (New Zealand) and Laurens Vanthoor (Belgium) secured the win at the wheel of the ca. 510 hp No. 912 Porsche GT Team 911 RSR. The 12 Hours of Sebring winners Patrick Pilet (France) and Nick Tandy (Great Britain) finished in fifth-place in the sister car with car number 911.

Following the 100-minute race – the shortest of the IMSA season – Porsche leads the manufacturers’, drivers’ and teams’ classification in the North American sports car championship with three consecutive pole positions and two wins in a row. Thanks to the Long Beach victory, Bamber and Vanthoor have moved to the top of the drivers’ classification. Their works driver colleagues Pilet and Tandy sit in third-place.

Round four of the Championship will be contested at the Mid-Ohio Sports Car Course on the first weekend of May. Bamber and Vanthoor are the defending race winners of the two-hour, 40-minute race in Lexington, Ohio.

Steffen Höllwarth, Program Manager, IMSA WeatherTech SportsCar Championship.
“What a thriller! At first everything ran according to plan. We defended the first two positions and managed to eke out an advantage. Ford gambled on the strategy and hoped for a safety car phase. They took the lead when one came out. But our No. 912 car reclaimed the lead and brought it home. The sister car could no longer match the pace on the second set of tires. We have to take a look at why. Last year Earl and Laurens retired while in the lead, now they’ve made up for that with this victory.”

Earl Bamber, Driver, No. 912 Porsche GT Team Porsche 911 RSR.
“That was a really crazy race. Laurens kept our car in P2 at the start. At one point someone hit the rear of the car and we sustained some damage. After the pit stop I was running in third. I then overtook Patrick [Pilet] and the leading Ford shortly afterwards. After that it was all about somehow getting the car to the finish. I prayed that the diffuser wouldn’t fall off. It didn’t – I’m pleased!”

Laurens Vanthoor, Driver, No. 912 Porsche GT Team Porsche 911 RSR. “What a huge race. At the start it was really close a couple of times between our two Porsche 911 RSR, and we only just managed to dodge a damaged prototype. But apparently there was slight contact. Our rear diffuser was damaged and it couldn’t be properly fixed. Luckily it held until the end. I’m really thrilled about my first win at Long Beach!”

Patrick Pilet, Driver, No. 911 Porsche GT Team Porsche 911 RSR.
“Nick got away well at the start and managed to easily retain his lead. We experienced a little bad luck with the safety car and lost the top spot during the pit stop. During my stint I had difficulties with the tires. Everything was perfect in qualifying, but not in the race. I’m thrilled for my victorious colleagues who put in an exceptional drive despite the damaged diffuser. The overall result is good for Porsche’s position in the manufacturers’ classification.”

Nick Tandy, Driver, No. 911 Porsche GT Team Porsche 911 RSR.
“The race began really well for us and we were clearly in the lead. Our strategy was also the right one. For some reason we didn’t find our rhythm in the second half of the race. The pace was simply not as good as it previously was and we couldn’t make our way up the field. We’ll now take these points home and are very motivated for the upcoming race.”

TRG On Top. Pumpelly Leads Pole to Checker in SRO GT4 at Long Beach.
Longtime Porsche customer team TRG ticked all of the boxes at the Streets of Long Beach April 12 – 14, round seven of the SRO GT4 America season. Saturday, Spencer Pumpelly earned the overall pole position for the GT4 America West Championship race with the No. 66 Porsche 718 Cayman GT4 Clubsport. On Sunday, the Atlanta, Georgia-resident fought race-long pressure to cross under the checkered flag first overall in the familiar TRG-blue mid-engine Porsche. It was the first win of the season for Pumpelly and TRG in the new-for-2019 GT4 machine. The successful 50-minute race moves Pumpelly to the top-spot season-long drivers’ championship.

The cement wall-lined street course, which celebrated its 45th year of competition this weekend, puts a premium on qualifying and the California-based team put a great effort in to take the top-spot for the No. 66. Once there, Pumpelly used it to precision. At the initial start, and each subsequent restart, the veteran racer timed his acceleration out of the final hairpin turn perfectly pushing the 718 Cayman GT4 Clubsport out of reach of the chasing Ian James in the Panoz Avezzano GT4. James made multiple attempts on the Porsche but each time Pumpelly held back the assault taking the race victory leading flag-to-flag.

The Long Beach race, which started five of the Porsche-built GT4 customer cars, was only for GT4-specification cars. However, the next stop on the SRO Blancpain America schedule, April 26 – 28, will see a full-contingent of Porsche GT cars in multiple classes and categories: 911 GT3 R in GT3 and 718 Cayman GT4 Clubsport in GT4. Rounds 7 and 8 at VIRginia International Raceway in Alton, Virginia will see SprintX races when the GT3 cars return as well as Sprint and East Championship races with the GT4 cars.