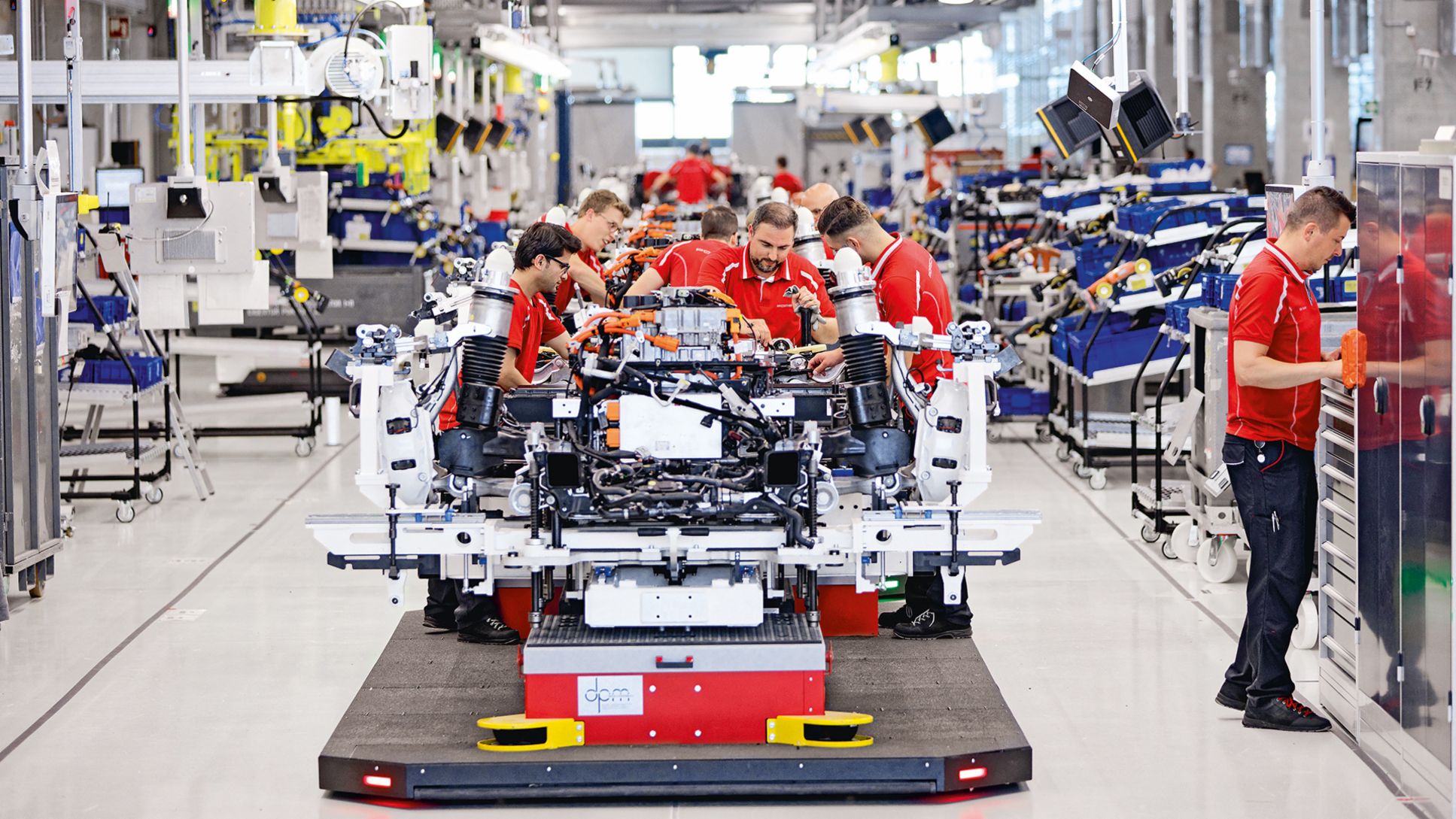 The first visit to the world’s most modern car production facility.

It smells like fresh paint, and the mobile platforms on which workers are assembling cars are not yet running at full speed. A specialist from the systems maker walks behind a small automated vehicle that is navigating through the hall to learn its way around. Soon it—and many of its “colleagues”—will be delivering components on their own to the individual assembly stations.

This is what the world’s most modern automotive production plant looks like in late June 2019. It is located in one of the automotive industry’s most historically significant sites—Stuttgart-Zuffenhausen, the headquarters of the Porsche sports-car maker. Here is where the Porsche Taycan, first presented to the public on September 4, is being built.

From an emotional perspective it makes a lot of sense for both the iconic 911 sports car and the potentially iconic new Porsche automobile to be made at this factory so rich in history and tradition. From the rational perspective of Porsche’s planners and production experts, however, the idea was daring. And that’s putting it mildly. The company could have had it easier. As Zuffenhausen site manager Christian Friedl put it, “We’re already making superb use of our capacities, we have hardly any room for expansion, and we’re building cars in the middle of a city right next to residential areas.”

The fact that the plan was nevertheless put into practice has a lot to do with effort and enthusiasm. The planners began by developing a concept that also elicited enthusiasm on the part of the board. “Not a single square meter of additional ground was paved over for the new facility, and all of it was installed on the existing site,” reports Friedl with pride. Moreover, make the facility interesting from an economic perspective as well, Porsche offered a site package to bring its own workforce on board. “All the employees have contributed at least indirectly to this project,” explains Friedl. “If it becomes as successful as we think it will, they too will profit accordingly.” The decision was made at the end of 2015. Then the clock started running. As planning director Wolfram Kirchert remarks, “We had just forty months to plan and build the new plant.”

“While there was still a twenty-five-meter construction pit on the grounds, we could put on headsets and already see the complete production hall.” Reiner Luth

This was only made possible because the Porsche planners first created a “digital twin” of the plant. All the data—for the building shell, production equipment, comprehensive building technical systems, and the car itself—were compiled into a single model. Reiner Luth, then the head of the Taycan plant project and now in charge of the e-car segment, recalls, “It was absolutely fascinating, including for experienced planners. While there was still a twenty-five-meter construction pit on the grounds, we could put on headsets and already see the complete production hall.” That was not meant as a pleasant diversion. It saved a lot of time by enabling the team to determine how they would install the production and conveyor systems, with detailed specifications right down to the last inch. “Collisions” and planning mistakes were immediately evident. “It enabled us to minimize the inevitable risks involved with a new production system, new car, new drivetrain, and many new employees,” says Kirchert.

The new plant was finished in the record time of just seventeen months: twelve for the building itself and five for its systems. In parallel to that, the first cars in the preliminary series were already being made at the pilot center. “We deliberately included people who would later be working on standard-series production, and also the operating systems we’d be using later on like the automated guided vehicles (AGV) and handling equipment,” Luth explains.

Standard-series production is now underway. Because space in Zuffenhausen is limited, the Taycan is being made on three levels. Visitors to the Taycan production facility might be surprised to see that people have not been replaced by robots. As Friedl reports, “We have hired and intensively trained 1,500 new employees for the Taycan and its derivative the Cross Turismo.” The underlying principle of Porsche Production 4.0, as the current production concept is called, continues to emphasize a focus on people. “As far as we are concerned, the aim of Industry 4.0 is to support workers. It will make manual processes more effective and enhance their quality even further. What we are doing here is perfecting our production system.” The early stages of developing the concept with Porsche Consulting are very vivid in his mind. “Many of the ideas we came up with then have now become reality.”

The most obvious innovation in the Taycan assembly facility is the absence of a fixed mechanical conveyor system. “This is a world premiere in automotive flow production,” says Luth. The cars are assembled on automated guided vehicles, or AGVs, which move on their own. Materials are supplied by around fifty smaller AGVs. The concept offers considerably greater flexibility. When a new version of the car body is added, the same assembly system can be used. And even when the Taycan gets a successor some years down the road, the system will not need to be replaced or restructured. “The assembly program is even independent of the drivetrain,” says Kirchert. “We can use this concept to produce everything from battery-driven electric vehicles to all types of cars with combustion engines, because we stick to the standard assembly sequence. We don’t use takt times, but we always follow the same order.”

The assembly line can certainly breathe, so to speak. If one step takes longer for a car, the AGV moves more slowly and catches up later. In addition, the workers can accompany “their” cars over a number of assembly stations. As Friedl notes, “It’s important to us that our highly trained employees do varied work and can see their results.”

Friedl goes on to describe how that also applies to other production lines, such as those for the two-door sports cars in Zuffenhausen. They too are being brought up to the latest technical standards and have received some innovations even earlier. He gives the following example: “Final inspections include making sure the rear spoiler extends and retracts correctly. The workers used to get into the car, extend the spoiler, and then get out to examine the operations and visuals. Today they simply activate the process on their smartwatches, which saves time.” The concept was first applied and optimized in the existing sports car production system, and is now being used for the Taycan. The technology is also capable of much more. Instead of using external devices to test automotive functions, workers log onto a car’s on-board electronics. Production and vehicle data will one day merge. As Kirchert explains, “We’re going to have the cars’ electronics, or intelligence, test themselves, calibrate themselves, and notify us of any irregularities. Artificial intelligence systems will also come into play here.” Moreover, the factory’s digital twin will see further use. In the future, its ability to present virtual versions of different scenarios is expected to support production- related decisions.

The enthusiasm and pride of the project leaders are clear to see. Over a period of four years, 200 planners and as many as 2,000 construction and plant experts were involved. Now the first flow production facility to assemble cars on automated guided vehicles has started up on schedule. This is a smart factory culture in pure form—in other words, the Porsche Production System 4.0—which will be further developed and extended to other sites.