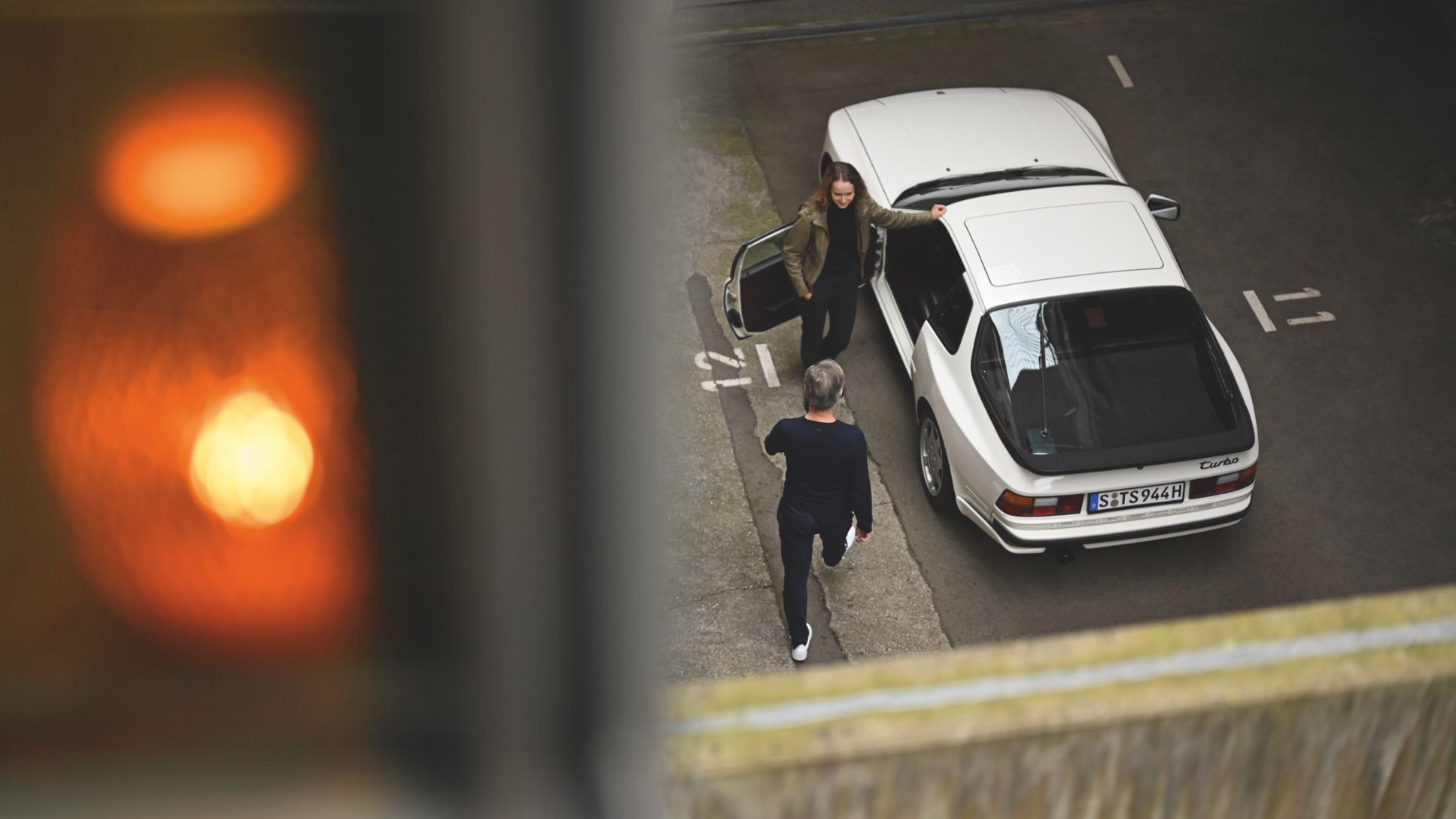 The story of Sonja and Wolfram Schäffer and their Porsche 944 Turbo is one of searching and finding. It tells the story of the melding of these two things: of the endless process of searching for a destination that only makes itself known when one starts following the path – a destination that one finds without realising one was ever looking for it. “In the best of cases, you find yourself along the way and only realise in the fullness of time how perfectly something fits,” says Sonja Schäffer, 45. “It appears to be pure chance,” adds her husband, Wolfram, 60. “But perhaps it’s not that at all.” The two designers have fulfilled a long-held dream. Outside their spectacular home, a rare Porsche 944 Turbo S can be found in the rear courtyard. Inside, they begin to tell the tale of how their first Porsche found them.

As with so many stories of passion and longing, its beginnings lie far in the past. Sonja Schäffer’s grandfather raced at the Nürburgring and, even as a child, this daughter of a family of artists dreamt of Porsche sports cars. “I’ve always found the design brilliant. In our family, design always played a huge role, and the design quality exhibited by the brand was simply amazing,” she says. “I knew that I would one day drive a Porsche.” But it would not be any time soon.

In the late 1990s, she started working for the agency that Wolfram Schäffer had founded in 1993. The two became a couple, got married and had three children. The challenges, both professional and private, were great. The focus was not on sports cars. In spite of the many automotive industry contacts that Wolfram Schäffer, with his agency in Stuttgart, had built over decades, their deliberations only began to take shape much later.

“In addition to our family life, the expansion of our apartment above the office was a project that occupied us for a long time,” he explains. In 2009, the couple moved their professional and private lives into a vacant building in an old industrial complex in Bad Cannstatt, a borough of Stuttgart. This story, too, is one of searching and finding. “We always deliberate, long and thoroughly: What are our needs?” says Sonja Schäffer. “We don’t want to copy trendy concepts, but rather arrive where we need and want to be. To do that, we have to work out what we’re really looking for.” The result is a one-of-a-kind home that is somehow pleasantly restrained despite its creative impact. And it led inexorably to the search for the right car. So why a Porsche 944 Turbo S?

“I like its discreet appearance,” says Wolfram Schäffer, drawing a parallel to the design of his residential and office spaces. Like the former industrial halls in the creative Glockenstraße neighbourhood, this car – which unites everyday functionality with weekend verve – is, for him, a statement. “It seems rather small by today’s standards, yet is full of energy. It can do so much more than you can see at first glance,” he says. “I like that. And of course, it’s really well designed.” As a professional designer, that’s naturally very important to him. He, too, has heard the story of Apple founder Steve Jobs, who is said to have rewarded successful employees with a brand new Porsche 944 on occasions, because he was so taken with the car’s design. “For me, it’s both aspects,” says Wolfram Schäffer. “Clever engineering combined with this idiosyncratic design. The acceleration and performance of the turbo is also exhilarating,” he says. His wife adds: “The outside only works if you have the inner values.”

Last off the line

And inside, the 944 Turbo S, built in 1988 as the last of its kind, has plenty to offer. One of a special series of the 944 Turbo that was limited to just 1,635 examples, the car was equipped with several features taken from the hugely successful racing version. An enlarged turbocharger boosted output to 247 hp right out of the factory. The special model included the M030 package as standard, which included a height-adjustable Koni coilover suspension, among other highlights. Other special features included a limited-slip differential and an anti-lock braking system, a braking system developed for the Porsche 928 S4, and a reinforced gearbox with an external oil cooler. Standard equipment also included a catalytic converter.

“Of course, it’s the pared-down nature in combination with the special features of this car that make it so alluring,” says Wolfram Schäffer. It’s an appeal that sets the car apart for connoisseurs. “Those with a connection to the car know its qualities.” This, too, is a statement – and a deliberate one.

Both now say the choice of paint in combination with the interior was a subliminal one. “We wanted to remain clear and unambiguous here too,” says Wolfram Schäffer. “White and Bordeaux Red is classic and in our opinion underlines the timeless quality of this car.” The fact that they chose a colour combination that worked in perfect harmony with their office and apartment only dawned on them over time. A dominant white in the office on the ground floor, red floors in the basement, with red brick and other applications in the same colour – “somehow we always naturally find the way to our colour palette,” laughs Sonja Schäffer. It’s more a case of a meaningful encounter that one wasn’t actively looking for than a pure coincidence.

Uniting the past and the future

Even if the first contact came about by chance. Via their business partner Peter Oberndorfer, a former racing driver who competed successfully in the Porsche 944 Turbo Cup in the 1980s among other things, the couple got to know another former racer, Paul Singer. “Peter said: ‘He might have a good 944 in his barn,’” recalls Wolfram Schäffer. “We had looked at a few in our orientation phase but here it was clear very quickly,” says Sonja Schäffer, admitting  that she “fell in love with this extremely sporty car” which “had something futuristic about it” despite its age. It’s not timeless in the conventional way. It’s timeless because it unites the past and the future.

The chance find in summer would turn into the story of a lifetime. “For me, the car is a kind of transformer,” says Wolfram Schäffer. “The longer I drive, the more I feel an invisible hand enveloping me. It’s such a wonderful feeling of security that when I get out of the car after hours behind the wheel, I think: ‘I want to keep driving! I haven’t had enough!’ That was a new feeling for me.”

Wolfram Schäffer had waited a long time for it. But now he feels it, that magic – in his very personal way. “The car puts me in a state of transformation. My thoughts are different when I sit in it. It’s a certain form of inspiration that is transferred from the car to the driver. This drives me in my creative work as well, because the environment is a special one.” Wolfram Schäffer looks at his wife and she nods. “It’s a catalyst for creativity. It opens doors in your mind and you see things in a different way. That obviously helps with inspiration.”

They’ve each found something special in the new car. They weren’t looking for it – it found them. And it inspired them too. Sonja and Wolfram Schäffer are already watching their next idea take shape. A 911 – perhaps a G-Series or 964. Which 911 will it be, and how will it look? They don’t need to worry – it will find them.

Text first published in the Porsche Klassik Magazine, No. 22.

Factory restoration of a rare super sports car: Car enthusiasts of the 1980s and 90s will certainly remember the Porsche 959 as the trump card of its time. A super sports car with a top speed of 195 mph, just 292 examples were produced by Porsche. Former racing driver Nick Heidfeld owns the even rarer Sport version, of which only 29 were built.