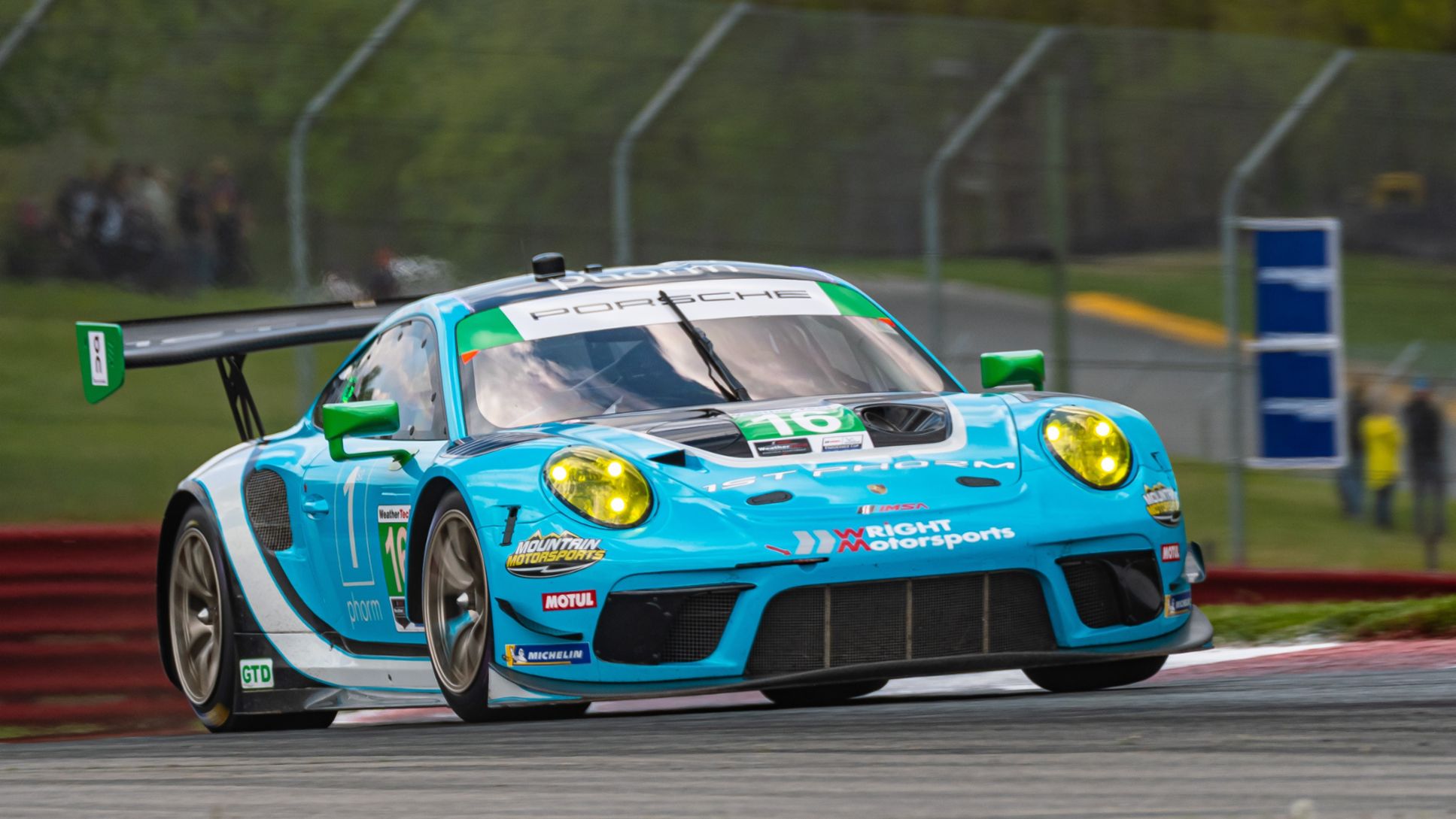 Porsche customer teams Wright Motorsports and McCann Racing will enjoy the homefield advantage this weekend as the IMSA WeatherTech SportsCar Championship and Michelin Pilot Challenge travel to the Mid-Ohio SportsCar Course. Batavia, Ohio-based Wright Motorsports is the sole Porsche 911 GT3 R in the field for the GTD class of the WeatherTech series. In addition to the two-four and 40-minute feature race for the GT3-specification machines on Sunday, May 15, the 2.258-mile, 13-turn natural terrain road course will also host the Michelin Pilot Challenge for GT4-spec cars on Saturday, May 14. Included in the two-hour support series race will be six Porsche 718 Cayman GT4 RS Clubsport race cars including McCann’s No. 8 with Canton’s Michael McCann behind the wheel. Porsche is the winningest marque at the Lexington, Ohio-area track by a large margin, 24 victories to nine wins earned by BMW.

Veteran team principal John Wright has built one of the leading sports car racing teams in North America, all under the banner of the German sports car maker. Accolades last year alone include the IMSA Michelin Endurance Cup (the endurance race championship within the WeatherTech Championship), the overall title in the Michelin Pilot Challenge and several titles in the SRO America series. In 2022, the Porsche customer has already earned five race wins combined on the IMSA and SRO calendars, including the prestigious 24-hour classic at Daytona and the most recent GTD class race at WeatherTech Raceway Laguna Seca on May 1. The success has been masterminded and prepared at the program’s headquarters in Batavia, Ohio, less than 200-miles from the front gate of the popular Mid-Ohio facility. With drivers Ryan Hardwick (Atlanta, Georgia) and Jan Heylen (Belgium now living in Florida), Wright Motorsports is 30-points ahead of the GTD class field in both the driver and team title chases. Porsche has a 26-point margin over Mercedes-AMG in the GTD Manufacturer standings.

The GTD Pro class – for GT3-specification cars with all professional driver lineups – is not on the race card for this weekend’s round. The class, which features the points leading Pfaff Motorsports Porsche 911 GT3 R racer, will next compete in the Six Hours of The Glen, June 13 – 26, at Watkins Glen International. The “Plaid Porsche” has won twice this season, first at the Rolex 24 At Daytona in January and at the most recent round, the Monterey Sports Car Championships. The driver combo of Matt Campbell (Australia) and his Porsche factory driver teammate Mathieu Jaminet (France) hold a 50-point lead in the driver standings while the Canadian-based Pfaff program holds the same lead over the No. 3 Corvette. Porsche is 40-points ahead of Chevrolet in the Manufacturer standings.

Six Porsche 718 Cayman GT4 RS Clubsport race cars are entered for Saturday’s Mid-Ohio 120 including local team McCann Racing. Ohioan Michael McCann (Canton, Ohio) joins veteran Porsche specialist Andrew Davis (Athens, Georgia) in the No. 8 McCann Racing machine. McCann is based in nearby North Canton, less than an hour’s drive from the track. The family-run operation is early in its journey of professional sports car racing but has already shown strength with a pole position run at the season-opening round at Daytona. Michael McCann also pilots a Porsche 911 GT3 Cup race car prepared by the team in the one-make Porsche Carrera Cup North America Presented by the Cayman Islands. The two-hour, May 14 race is the fourth round of the 2022 championship for road car-based racers.

Team TGM brings its pair of mid-engine Porsche race cars with the No. 64 Team TGM entry of Ted Giovanis (Highland, Maryland) and Owen Trinkler (Nashville, Tennessee) in sixth-place in the championship chase. Their No. 46 team car, driven by brothers Hugh (Unionville, Pennsylvania) and Matt Plumb (Chadds Ford, Pennsylvania), are in tenth-place after WeatherTech Raceway Laguna Seca. The No. 22 Hardpoint Porsche 718 Cayman GT4 RS Clubsport of Nick Galante (Greenfield, Massachusetts) and Sean McAlister (Beverly Hills, California) will race the Racing to End Alzheimer’s Porsche on the flowing Mid-Ohio course. BGB Motorsports has entered the No. 83 for Thomas Collingwood (Canada) and Spencer Pumpelly (Atlanta, Georgia) while CarBahn with Peregrine Racing places Mark Siegel (Palo Alto, California) and Tyler McQuarrie (Danville, California) in the No. 93. RS1, who won the season-opening round at Daytona, is the highest ranking Porsche entering Mid-Ohio but has not entered the midwestern event. The two-hour Mid-Ohio 120 takes the green flag at 4:05 p.m. ET/1:05 p.m. PT on Saturday, May 14.

“Mid-Ohio is a special race track for us since it is so close to our main shop in Batavia, Ohio. Coming into this event as the points leaders brings a healthy kind of pressure for us to continue our drive in this championship effort. We know we have a proven driver lineup, a more than capable race car and consistently the fastest team in pit lane. This will be a good event for us.”

“It’s a home race for our Wright Motorsports team this weekend at Mid-Ohio! We are very proud to be coming into this home race with the GTD championship points lead. I’ve always enjoyed racing at Mid-Ohio, and I’ve had quite a bit of success at this track. I finished on the GTD podium here in 2019 and 2020, and I also took the pole position here last season for the IMSA Michelin Pilot Challenge race as well. So, it’s safe to say that I like this place! The focus is going to be centered around keeping our positive momentum going and continuing to execute on what we can control. Looking forward to it!”

“This is the home race for Wright Motorsports and we’re back in the lead of the championship. The goal is to keep it there. Mid-Ohio is another low grip surface which should suit us well.”

"We left Sebring leading the championship points. However, Laguna Seca was a forgettable race with unlikely situations causing both cars to DNF. We know that's part of racing and we're excited to head to Mid-Ohio and another chance to score points.  Mid-Ohio has always been a good track for us, and we anticipate the same this week.  We could not be more pleased with our Porsche 718 Cayman GT4 RS Clubsports.  As a team owner, when you make the sometimes difficult decision to change directions with manufacturers, and in this case a brand new race car, you're taking a gamble, but this one has paid off from day one."

"It's no secret that Laguna Seca was not a good weekend for Team TGM and the quick turnaround to Mid-Ohio has the team working overtime. But the crew has done a fantastic job and our Porsche 718 Cayman GT4 RS Clubsports are ready to go. These Porsches are a pleasure to race and on a technical course like Mid-Ohio, if we can stay out of trouble, we should have an excellent chance to be on the podium."