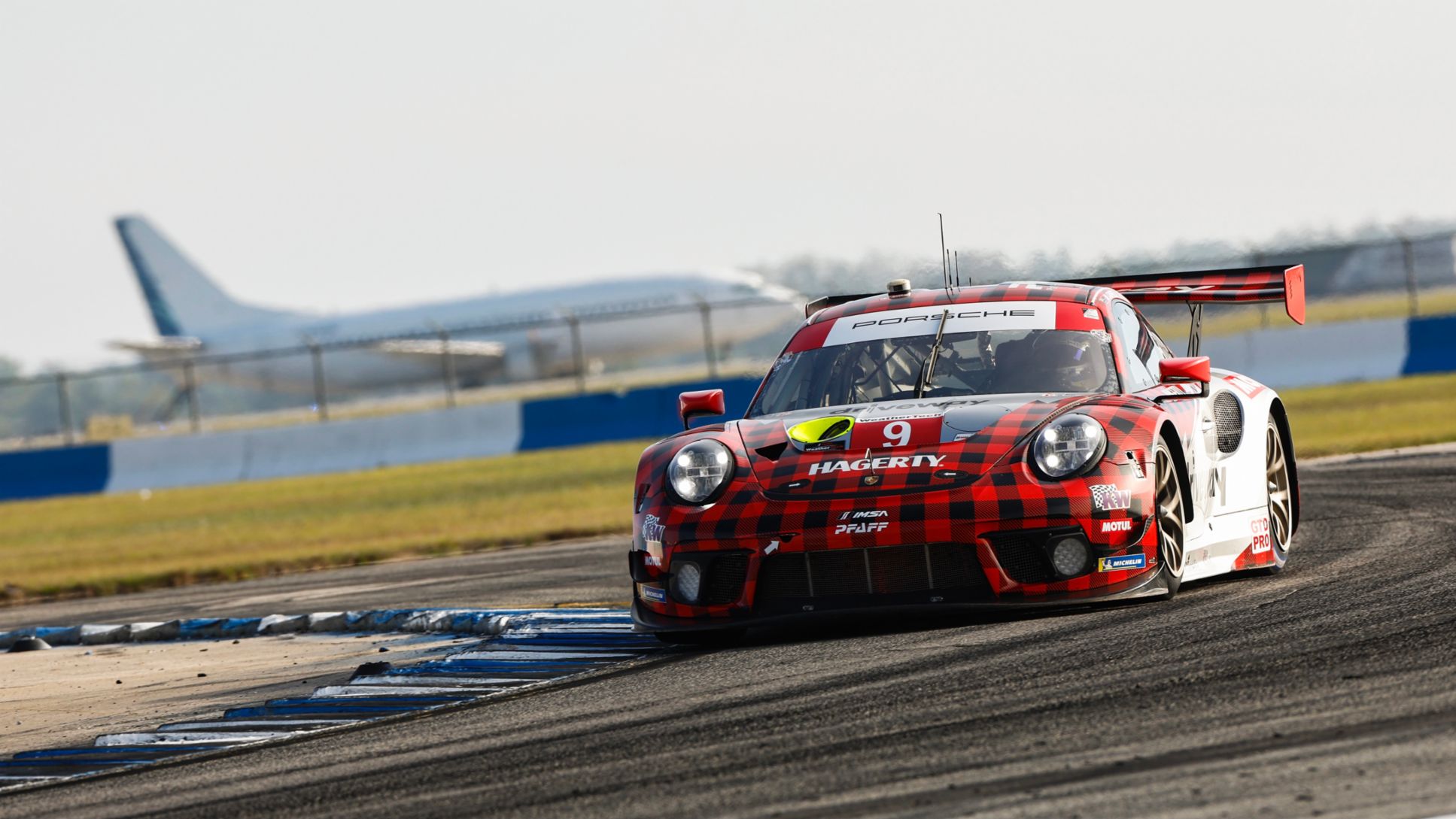 While the Grand Prix of Long Beach is the third round of the IMSA WeatherTech SportsCar Championship, the 100-minute event is the first “sprint” race of the season. It is also the first of the year outside of the state of Florida, beginning a two-race swing on the West Coast for North America’s top sports car racing series. The shortest event of the season, the April 9 race on the 1.968-mile, 11-turn temporary course laid out on the streets of Long Beach, California, features four Porsche customer teams campaigning the 911 GT3 R race car. Porsche is tied for most sports car wins by a manufacturer on the Southern California circuit with nine victories, the most recent in 2019.

One Porsche customer team is entered in the six-car GTD Pro class for the 47th annual Grand Prix of Long Beach weekend. Pfaff Motorsports fields the No. 9 for Porsche factory drivers Matt Campbell (Australia) and Mathieu Jaminet (France) in the all-pro class. The Canadian-based team opened the year with a victory in the prestigious Rolex 24 At Daytona and finished in second-place of the GTD class here last season. Pfaff currently leads both Team and Driver (Campbell/Jaminet/Felipe Nasr (Brazil)) point standings. Porsche sits atop the Manufacturer boards after the first two rounds as well.

Identical in car regulations to the GTD Pro class, the GTD class is a mix of professional and amateur drivers teamed together in a Pro-Am format. Customer programs have entered three of the 510+ horsepower, rear-engined Porsche race cars in this class. Led by Rolex 24 At Daytona class-winning Wright Motorsports, full-season regular Hardpoint and California-based GMG Racing each have the naturally-aspirated, flat-six engine-powered backbone of international GT3-spec racing entered. Wright Motorsports has the No. 16 Porsche readied for Ryan Hardwick (Atlanta, Georgia) and Jan Heylen (Belgium now living in Florida). Rob Ferriol (Fayetteville, North Carolina) and Katherine Legge (Great Britain) will challenge with Hardpoint’s No. 99 Porsche 911 GT3 R while James Sofronas (Villa Park, California) and Kyle Washington (Indio, California) bring the No. 34 GMG Racing machine from their Santa Ana, California shop. Washington will double his seat time over the weekend with a GMG Racing-prepared Porsche 911 GT3 Cup race car in the Pro-Am class of the Porsche Carrera Cup North America Presented by the Cayman Islands support series event. Wright Motorsports also has three of the Porsche 911 GT3 road car-based race cars in the one-make support series.

Track time on the tricky Long Beach street circuit is always at a premium. The WeatherTech Championship will only have two practice sessions, both on Friday, April 8, to prepare. Practice One will give all classes one-hour, starting at 9:15 a.m. PT (12:15 p.m. ET), to establish a baseline. Practice Two will be a partially split session with the GTD class drivers taking to the track from 1:15 p.m. to 2:45 p.m. local time – the first 15-minutes will be exclusive to the Pro-Am style class. The GTD Pro teams will join the group, along with the prototypes – at 1:30 p.m. and run until 3:00 p.m. The final 15-minutes will be for GTD Pro and DPi prototypes only. A 15-minute qualifying session – 5:15 p.m. – 5:30 p.m. local time – will set the grid and be the final time on track before the 100-minute race. The Grand Prix of Long Beach will take the green flag for Round Three of the 2022 season of the WeatherTech SportsCar Championship at 2:05 p.m. PT (5:05 p.m. ET) on Saturday, April 9.

All Porsche Carrera Cup North America sessions can be viewed live at www.PorscheCarreraCup.us and on the Peacock Streaming App.

“I’m very excited to go to Long Beach because I haven’t been there before. I’ve always looked at that race and I haven’t been able to go to a street circuit for a number of years now – the last time I was on a street circuit was Monaco. To finally get back to a street circuit after a few years will be a nice change. It’s really exciting coming into the weekend as well leading the championship. We maximized our performance at Sebring even though we were struggling a lot for pace, but we were able to get to the end and get a good batch of points. Damage limitation will be important as well, it’s so easy to make a mistake on a street track. It’s a very compact weekend with three sessions in one day and if anything goes wrong, it can really affect our weekend and starting position and at a street circuit, starting position is going to be absolutely critical.

“Long Beach is going to be exciting, it’s a completely different type of weekend compared to Daytona and Sebring. It’s going to be the first sprint race of the year, and this is something I’m quite used to from racing in Europe. We’ll need to be strong in qualifying. I’ll be qualifying as I know the track and I’ll try to help Matt in practice to get up to speed, but I’m not worried because he has experience in Australia on street road courses. Qualifying will be one of the keys, as well as the pit stop and strategy. To race in the streets is always a highlight in the year and it’s one of the favorites of all the drivers, so I’m really looking forward to it.”

"Racing in the Grand Prix of Long Beach is a dream come true for me! I've watched this spectacular race for years and have always wanted to compete here one day.  While I haven't raced on the streets of Long Beach, I have competed in several jet ski races here, as well as an AMA Supermoto event several years ago. I also really enjoy the challenge of racing on street circuits. It truly tests every driver's car control, and ability to take the car right up to the concrete walls in order to maximize pace. Our team had a strong car here last year, so I'm confident we can be competitive again this season.  Also excited for our first sprint race of the year with just Jan and I in the driver's seat. Can't wait to get going!"

“It’s no secret that I love going to Long Beach and have some fond memories racing there. Last year, we had a stint at the end of the race where we were among the quickest cars on track, so there’s some optimism again coming into this weekend. It’s a tough schedule though, and a short race, so we’re going to have to be on it from the start. The team knocked it out of the park last year and have been fantastic through the opening endurance races, so we feel strongly that we can put it all together in this street race.”