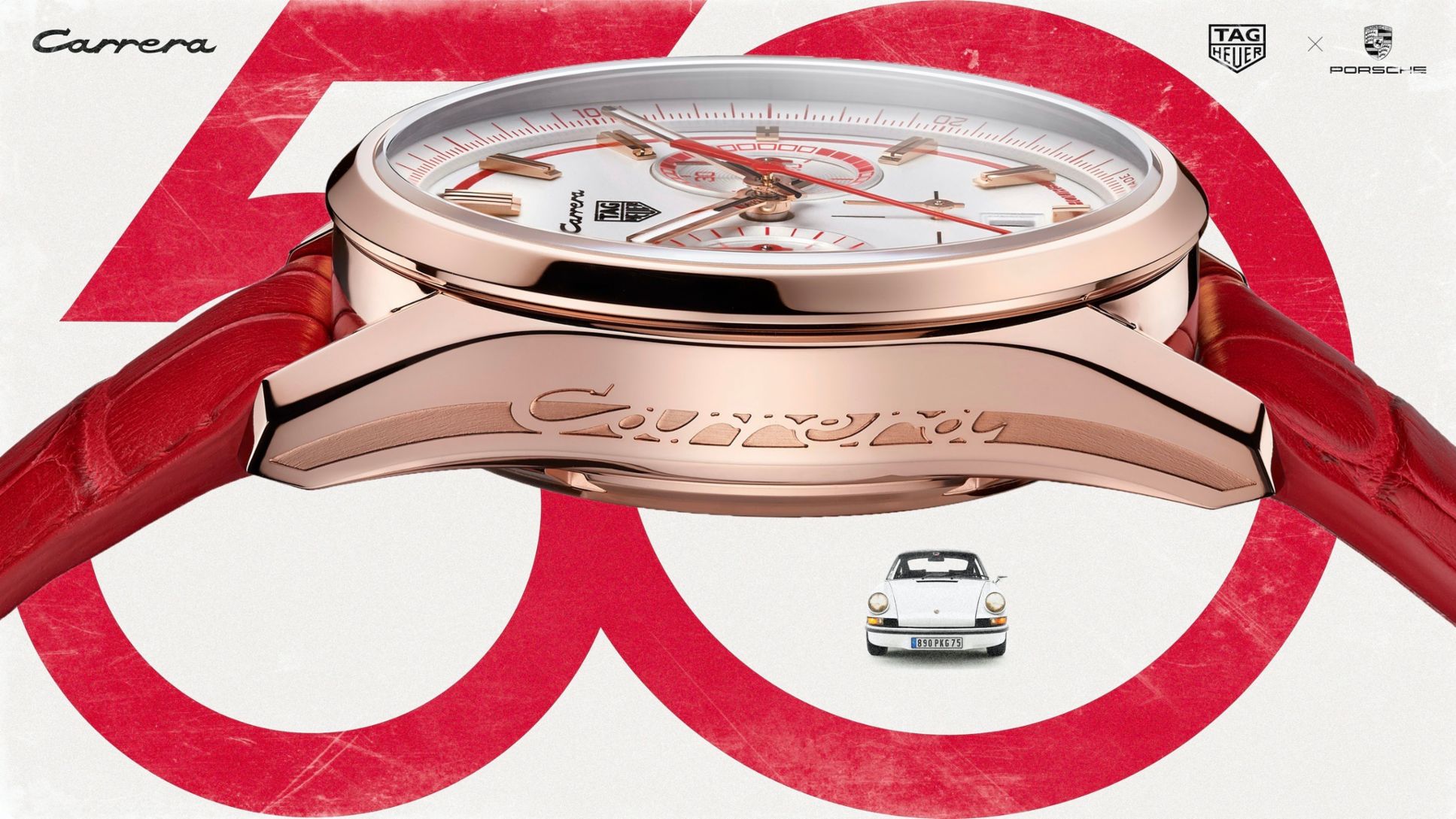 The watches are a tribute to one of Porsche’s most iconic models and the first 911 to bear the Carrera name: the Porsche 911 Carrera RS 2.7 which is celebrating its 50th anniversary in 2022. To mark the occasion, two distinctive TAG Heuer Carrera x Porsche Limited Editions are being introduced, showcasing the signature features that have made both the 1972 sports car and the 1963 chronograph timeless objects of desire.

“The Porsche 911 Carrera RS 2.7 was the first 911 to be christened ‘Carrera’ and the crowning glory of the Porsche range at this time,” says Detlev von Platen, Member of the Executive Board for Sales and Marketing at Porsche AG. “The anniversary of this sportscar icon is the perfect occasion for us to launch a joint watch with our close partner TAG Heuer, with whom we share the same philosophy and love for exclusive products that combine innovation and heritage.”

“The name and spirit of the Carrera are incredibly meaningful and emblematic for both TAG Heuer and Porsche,” says Frédéric Arnault, CEO of TAG Heuer. “So, for the 50th anniversary of the very first Porsche 911 Carrera, the iconic RS 2.7, we wanted to create a tribute watch that would express the character and power of this groundbreaking sportscar within our own signature TAG Heuer Carrera chronograph. The two timepieces we imagined together are sleek, assertive, memorable, they reflect their illustrious past but project something even more exciting, what Porsche and TAG Heuer can now achieve together.”

On October 5, Frédéric Arnault and Detlev von Platen presented the editions at an event in Paris. Beforehand, a road trip with influencers took place in the rural surroundings of the French metropolis, during which spectacular photos were taken. The destinations included the Palace of Versailles as well as the Fondation Louis Vuitton and the Baronville Palace. Numerous Porsche 911 Carrera RS 2.7 and other sports cars of the brand were driven.

Revealed on October 5, 1972, and designed for racing and rallying, the “Carrera RS” was the first Porsche 911 dedicated to motorsports and nicknamed “Carrera”. The Porsche 911 Carrera RS 2.7 hit the market at the end of the first generation of the 911. At the time it was the fastest German production automobile of its day and most powerful 911 available for use on the street. Lightweight and aerodynamic, it was also the first road sports car in the world to have a front and rear spoiler (soon to be known as the “duck tail”), which ensured improved driving stability and a higher top speed.

The wheels at the front and rear were of different widths for higher cornering speeds and improved braking. A road-legal vehicle which was intended to enable customers to take part in racing events. The exact same philosophy led to the introduction of the Heuer Carrera, a chronograph that was engineered for optimal timekeeping and legibility in high-speed race conditions but was also preferred by those who valued sleek design in everyday life.

Only 1580 Porsche 911 Carrera RS 2.7 and RSR 2.7 were produced, in a range of 27 vivid colors evocative of the 1970s, two of which were selected for the TAG Heuer tribute watches: Indischrot (Guards Red) and Glasurblau (Glacier Blue).

The limited-edition watches are based on the 42-mm TAG Heuer Carrera Chronograph with its elegant tri-compax layout, minutes and hour chronograph counters at 3 and 9 o’clock and a permanent second indicator and date window at 6 o’clock. Similar to the powerful Porsche 911 Carrera, TAG Heuer has equipped its premier chronograph with its most advanced movement, the in-house manufactured Calibre Heuer 02, with an outstanding power reserve of 80 hours. Visible though the sapphire crystal case back, the movement’s oscillating mass is customized to represent Porsche’s three-spoke steering wheel and bears the two partners’ logos side by side.

The Sporty Blue Edition is limited to 500 pieces, marked with a limitation number. The finely polished steel case, rhodium-plated indexes and hours and minutes hands recall the car’s chrome door handles, mirrors, and window frames. The dial is smooth white opalin, while the two sub-counters have an eye-catching snailed finish.

Porsche’s design codes are seamlessly integrated throughout the TAG Heuer piece, with blue lacquered chronograph and central hands, blue lacquered pushbuttons and shield logo on the crown and blue markings on the Calibre Heuer 02 oscillating mass. The right sub-counter design recalls the rims’ aesthetic, and the signature color stripe and Carrera logo make a bold statement on the dial, flange, case side and strap.

The two collectors’ timepieces are each presented in a specially designed and co-branded packaging from TAG Heuer x Porsche with vibrant colored inserts. Available since October 5, 2022, they are sold exclusively in TAG Heuer boutiques, on www.tagheuer.com and at select retail partners.