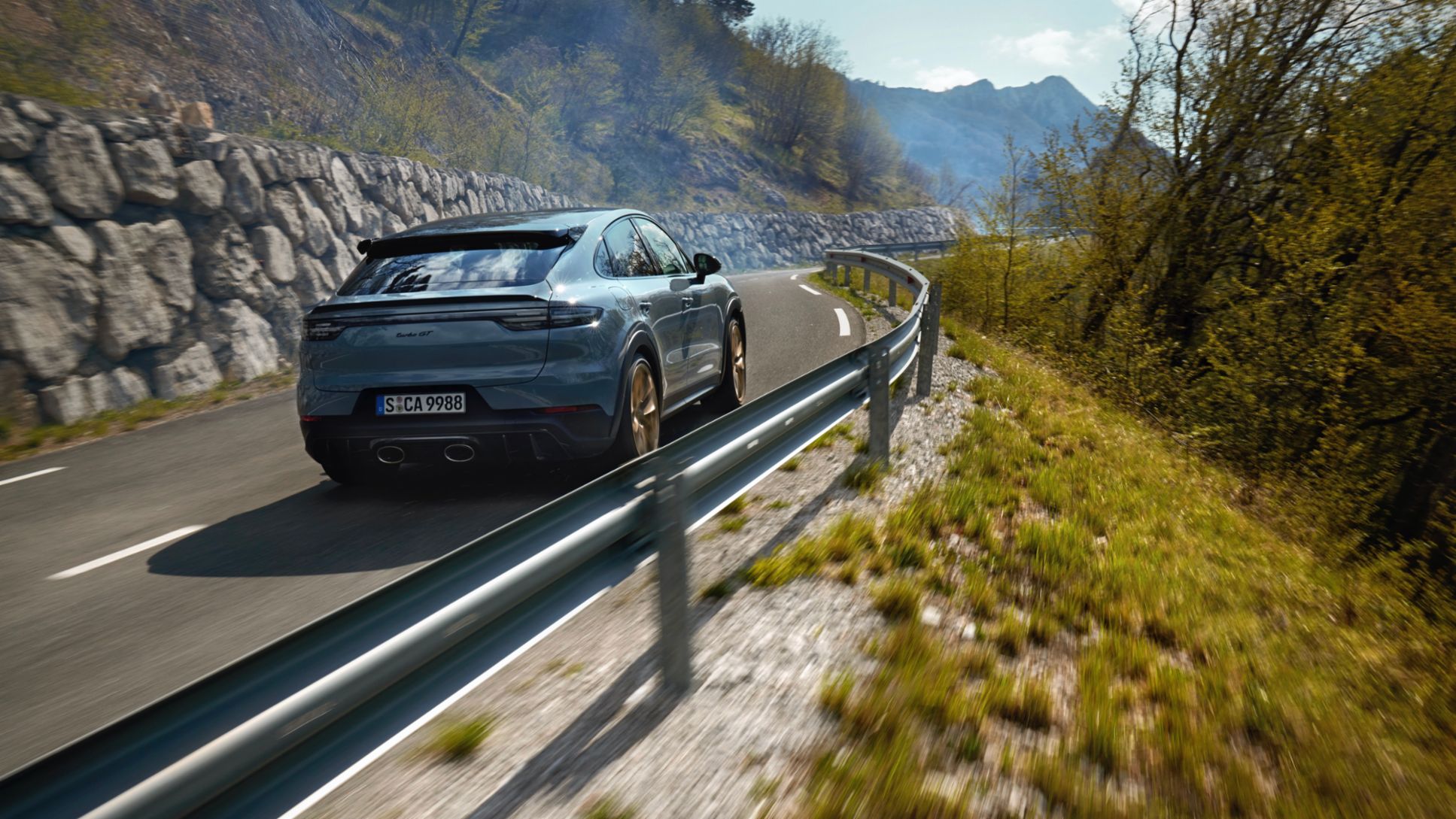 Porsche is introducing a new high-performance variant at the top of the Cayenne model range: the new Cayenne Turbo GT combines phenomenal performance with a high degree of utility. Its 4.0-liter twin-turbo V8 engine develops 631 hp - 90 hp more than the Cayenne Turbo Coupe. Torque also increases from 567 to 626 lb-ft. As a result, the Cayenne Turbo GT can accelerate from a standstill to 60 mph in 3.1 seconds, complete the quarter-mile sprint in 11.6 seconds and achieve a top track speed of 186 mph, making it the quickest, and fastest production Cayenne ever offered by Porsche.

The Cayenne Turbo GT, which is only available in the Coupe body style, is equipped as standard with an array of performance-enhancing suspension systems and high-performance tires that were made exclusively for this model. The result is a performance SUV that remains very much a Cayenne to its core, and yet possesses reserves of power and ability that allow it to be adept on a demanding road or even a track.  By way of demonstrating its capabilities when pushed to the extreme, Porsche test driver Lars Kern took to the legendary Nürburgring Nordschleife where he set a new official SUV lap record of 7:38.9 minutes with the Cayenne Turbo GT for one 12.9-mile lap.

Compared to the Cayenne Turbo Coupe, the Turbo GT has a 17 mm lower ride height. The suspension components as well as the electronically controlled chassis systems were specifically calibrated to enhance performance. The three-chamber air suspension is up to 15 percent stiffer and the damper calibration of the Porsche Active Suspension Management (PASM) is retuned, as is the Power Steering Plus and rear-axle steering system. The active Porsche Dynamic Chassis Control (PDCC) has also been re-tuned to further reduce body roll and leads to more precise turn-in at higher cornering speeds. To complement this, Porsche Torque Vectoring Plus (PTV+) and the further improved front axle sharpens the vehicle handling and turn-in response. The front wheels are one inch wider compared to the Cayenne Turbo Coupe, and the negative camber has been increased by 0.45 degrees to allow the specially developed 22-inch Pirelli P Zero Corsa high-performance tires to maximize their contact patch with the road. Stopping power is induced by the standard Porsche Ceramic Composite Brakes (PCCB), which are wrapped in yellow calipers, but can be optionally equipped in high-gloss black. The rotors measure 440 mm in the front, 410 mm in the rear.

The twin-turbo engine in the Cayenne Turbo GT is the most powerful V8 currently offered by Porsche. The most significant optimizations were made at the crankshaft, turbochargers, direct fuel injection system as well as the intake and charge air cooling. The V8 of the Turbo GT is significantly altered compared to the engine found in the Cayenne Turbo Coupe, with a different crankshaft, pistons, connecting rods, timing chain and the torsional dampers.

The eight-speed Tiptronic S automatic transmission has been modified to offer quicker shift times. Porsche Traction Management (PTM) on the Cayenne Turbo GT has been fitted with a water-cooled transfer case, which further increases the thermal capacity of the drivetrain under high loads. The standard Sport Exhaust system is fitted with centrally-mounted tailpipes and has been specifically developed for the Cayenne Turbo GT. The exhaust is made of lightweight and particularly heat-resistant titanium, which, due to the lack of a center muffler, reduces its weight by approximately 40 lbs.

Performance oriented equipment: Carbon fiber on the outside, Alcantara® on the inside

Optionally available in the new color Arctic Grey, the Cayenne Turbo GT underscores its high level of performance with a number of model-specific design cues. A GT-specific front fascia with a pronounced front lip and larger side air intakes characterizes the front of the car. The contoured carbon fiber roof, black fender arches and the 22-inch GT Design wheels in Neodyme stand out at the sides of the Cayenne Turbo GT. The upper rear wing features side plates in carbon fiber along with an adaptive rear spoiler that features a two inch (50 mm) gurney flap, which is twice the size of the one on the Cayenne Turbo Coupe. The rear diffusor cover made of carbon fiber completes the rear design of the vehicle.

The performance-oriented character of the Cayenne Turbo GT is further enhanced by the extensive level of standard equipment. Eight-way Sport Seats in the front and a sport rear seat arrangement with two seats are standard. All seats are GT-specific with perforated seat centers in Alcantara®, contrasting stitching in Neodyme or Arctic Grey and “Turbo-GT” designations on the headrests. Appropriately, the multifunction sport steering wheel has a yellow 12-o’clock center marker.

Debut in the Turbo GT: New infotainment system for the Cayenne

The Turbo GT is the first Cayenne model to adopt the next generation of Porsche Communication Management (PCM) with improved functionality, a new user interface and new operation logic. PCM 6.0 is fully compatible with Apple CarPlay as before, but now also allows for integration of Apple Music and Apple Podcasts. Additionally, the system is now compatible with Android Auto™, allowing more smartphones to be paired to the car.

The Cayenne Turbo GT is available to order now and expected to reach U.S. dealers in early 2022. The MSRP is $180,800, not including a $1,350 delivery, processing and handling fee. 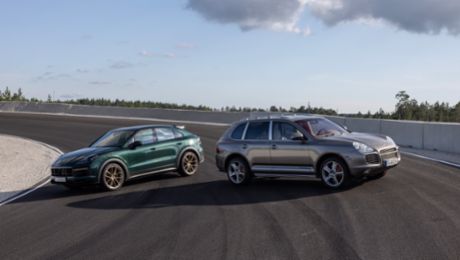 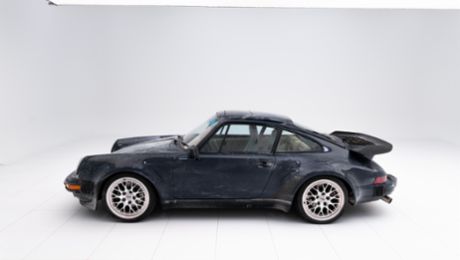