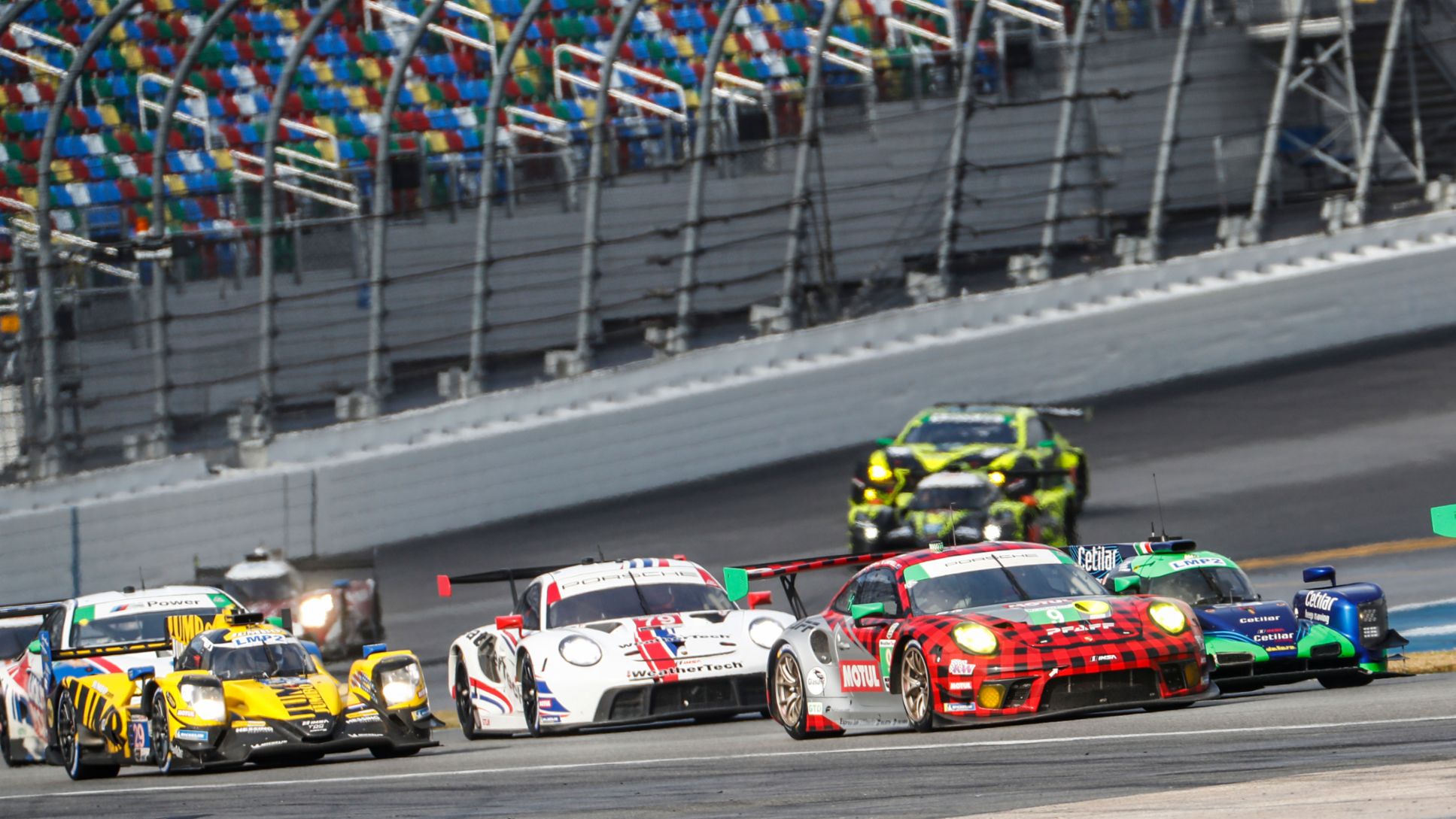 Customer operations have always been the backbone of the marque’s great racing heritage.

22 overall wins. 78 class wins. 42 wins for the Porsche 911. An entry every year since the race’s inception in 1962. The numbers speak volumes about Porsche history at the Rolex 24 At Daytona. The numbers are no less impressive in the current day. The German sports car manufacturer shuttered its factory operation after seven years with a victory at the 2020 IMSA WeatherTech SportsCar Championship season finale in Sebring, Florida. However, customer operations have always been the backbone of the marque’s great racing heritage. The 59th Running of the Rolex 24 At Daytona marks the opening of the 2021 IMSA WeatherTech SportsCar Championship and five Porsche privateer efforts are well-prepared to add their chapter in the history book that is Porsche and endurance racing on January 30 – 31 at Daytona International Speedway.

Proving that the ties run deep in the Porsche motorsport “family”, WeatherTech Racing returns to carry the banner in the GTLM class. As a privateer among factory entries, the class will be a challenge for the No. 79 WeatherTech Racing Porsche 911 RSR-19. However, if the three-day ROAR Before the Rolex 24 open test (January 22 – 24) proves to be an indicator, the driving team of Porsche “works” drivers Gianmaria Bruni (Italy), Kevin Estre (France) and Richard Lietz (Austria) joined by Porsche Young Driver Academy North America graduate Cooper MacNeil (Hinsdale, Illinois) will be on-pace when the green flag falls over the 49-car field on Saturday, January 30 at 3:40 p.m. The 515 HP, mid-engine Porsche 911 race car earned third-place in the 100-minute qualifying race held on January 24.

The adage that there is strength in numbers can be proven in the Pro-Am style GTD class where four Porsche 911 GT3 R race cars built in Weissach, Germany are entered. While one entry on the initial entry list (the No. 540 Black Swan Racing Porsche) had to withdraw as a result of owner/driver Timothy Pappas (Boston, Massachusetts) being diagnosed with COVID-19, four of the 500+ HP cars still remain a formidable foe for the remaining 75 percent of the class. 2019 IMSA WeatherTech Sprint Cup Championship-winning Pfaff Motorsports showed the most consistent speed and results of the test weekend for Porsche finishing in second-place of the qualifying race. Porsche factory driver Laurens Vanthoor (Belgium) and Matt Campbell (Australia) are joined by Porsche Test and Development Driver Lars Kern (Germany) and 2019 Sprint Cup and 2018 IMSA Porsche GT3 Cup Challenge Canada champion Zacharie Robichon (Canada) in the “Plaid Porsche”.

2020 IMSA WeatherTech GTD class runner-up, Wright Motorsports, rides into Daytona on a high-note with a strong driver squad led by Porsche factory ace Patrick Long (Manhattan Beach, California) and full-season teammate Ryan Hardwick (Atlanta, Georgia). The pairing will be complemented by Porsche expert Jan Heylen (Belgium) who drove to the season-closing victory at the 12 Hours of Sebring with Long and Hardwick. The quartet for Daytona is closed with Porsche specialist Klaus Bachler (Germany). The Ohio-based operation showed itself a leading challenging for the 2021 title with the fastest lap in qualifying during the Daytona test. However, a heavy accident early in night practice called on a skilled hand by owner John Wright who oversaw the purchase and preparations of the withdrawn Black Swan Racing Porsche 911 GT3 R the morning of the qualifying race. Despite the challenge, the team was on-track for the 100-minute qualifier showing its full intent to contend for the operation’s first Rolex 24 title.

Team TGM is well recognized in the Michelin Pilot Challenge paddock – having started with the Porsche brand in 2016. However, the Rolex 24 At Daytona will mark the first time the organization owned by Ted Giovanis (Highland, Maryland) will compete in the WeatherTech series. Giovanis shores-up his co-driver lineup with his Michelin Pilot Challenge teammates: Owen Trinkler (Nashville, Tennessee), Hugh Plumb ( Wilmington, Delaware) and Matt Plumb (Chesapeake City, Maryland). 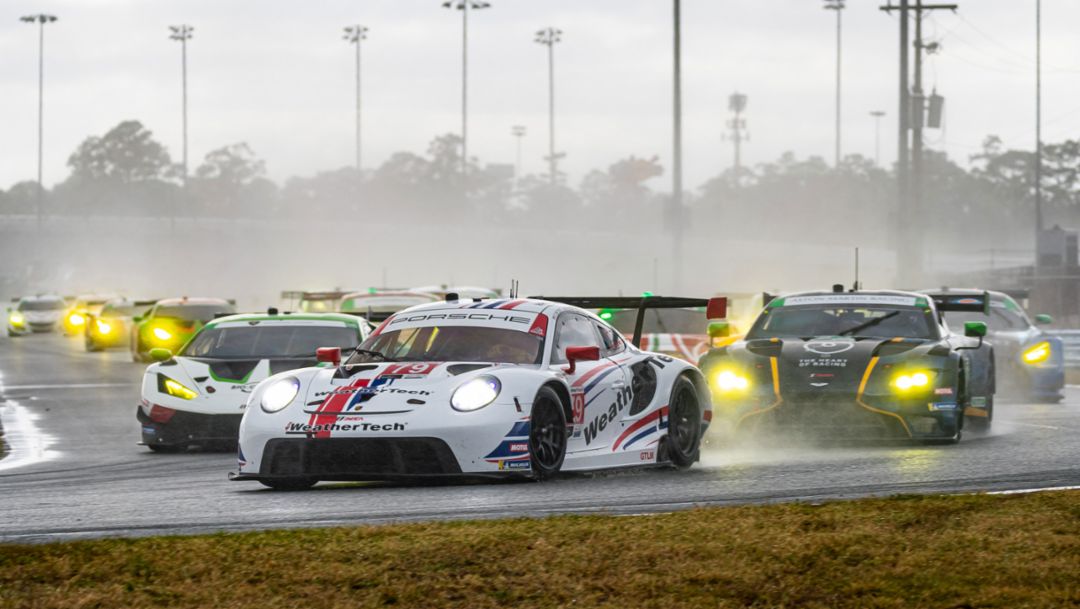 The Porsche customer team WeatherTech Racing has successfully concluded its first campaign with the 911 RSR in the IMSA WeatherTech SportsCar Championship.

Also new to the WeatherTech paddock but far from new to Porsche is the No. 88 Team Highpoint EBM organization. The freshly formed partnership of Team Hardpoint owner/driver Rob Ferriol (Fayetteville, North Carolina) and 2019 WeatherTech GTLM Driver Champion Earl Bamber (New Zealand) was the first to announce an entry into the Porsche Carrera Cup North America which will debut at Sebring International Raceway March 18 – 20. They then purchased a Porsche 911 GT3 R for Bamber and Ferriol to race in the WeatherTech GTD class. In early January, the program went one step further and announced the inclusion of two GTD class leaders: Katherine Legge (Great Britain) and Christina Nielsen (Denmark). It marks Nielsen’s return to Porsche where she has one class victory with the brand at Road America in 2018. Legge is a veteran of not only the class but open wheel racing as well. This will be her debut in a Porsche race car but she is a four-time WeatherTech race winner and finished in second-place of the GTD class at Daytona in 2018.

Porsche will look to extend its record for class victories on January 30 – 31 when the 59th Running of the Rolex 24 At Daytona takes place on the 3.56-mile road course at Daytona International Speedway. The green flag will fall at 3:40 p.m. ET with the checkered dropping 24-hours later on the opening round of the 2021 race season.

Matt Campbell, Driver, No. 9 Pfaff Motorsports Porsche 911 GT3 R.
“The first time I ran with Pfaff was in 2019 at Road America and we had a great race there. Obviously, it’s great to be back racing with them and hopefully we can keep that 100-percent winning rate – that’s the mindset going into the race. They’ve had the pace the last few years, so hopefully we can put that all together for next week and be at the top step of the podium at the end of next week, because everyone on the team is pushing towards that one goal.”

Lars Kern, Driver, No. 9 Pfaff Motorsports Porsche 911 GT3 R.
“In all everything went really well for the whole team. Everything is nice and calm – I think that’s most important because things can get pretty stressful during the 24 week, so I’m happy that everything went really well. We have a good direction on setup, all the drivers feel really good in the car. We have some new guys on the car, but it feels like we’ve been working together for years so that’s a big positive too – everybody’s in great spirits.

Ted Giovanis, Driver/Owner, No. 64 Team TGM Porsche 911 GT3 R.
“The Porsche 911 GT3 R GTD car is a great machine. I love driving it. It is similar in how it looks inside to my Porsche 911 GT3 Cup car, but it behaves very differently. It is far more responsive and has a lot more downforce. The entire group at Team TGM is very excited about making our Rolex 24 debut next week and delighted that we are doing it with Porsche.”

Earl Bamber, Driver/Co-Owner, No. 88 Team Hardpoint EBM Porsche 911 GT3 R.
“Once I put on the helmet, I don’t think of my role any differently. Jason, Rob, Will and the guys at the shop have been doing an awesome job. When I arrive here, I just have to do my job and drive the car. We’ll have a good debrief in the next couple of days and make sure we make an improvement and come out at the 24 and show what we’ve got.”

The first race of the IMSA WeatherTech SportsCar Championship season at Daytona gets underway on Saturday, 30 January, at 3:40 pm EST. Live timing of all sessions is available at scoring.imsa.com.

The Porsche GT Team campaigns a pair of 911 RSR finished in special liveries to bid farewell to the GTLM-class of the IMSA WeatherTech SportsCar Championship.