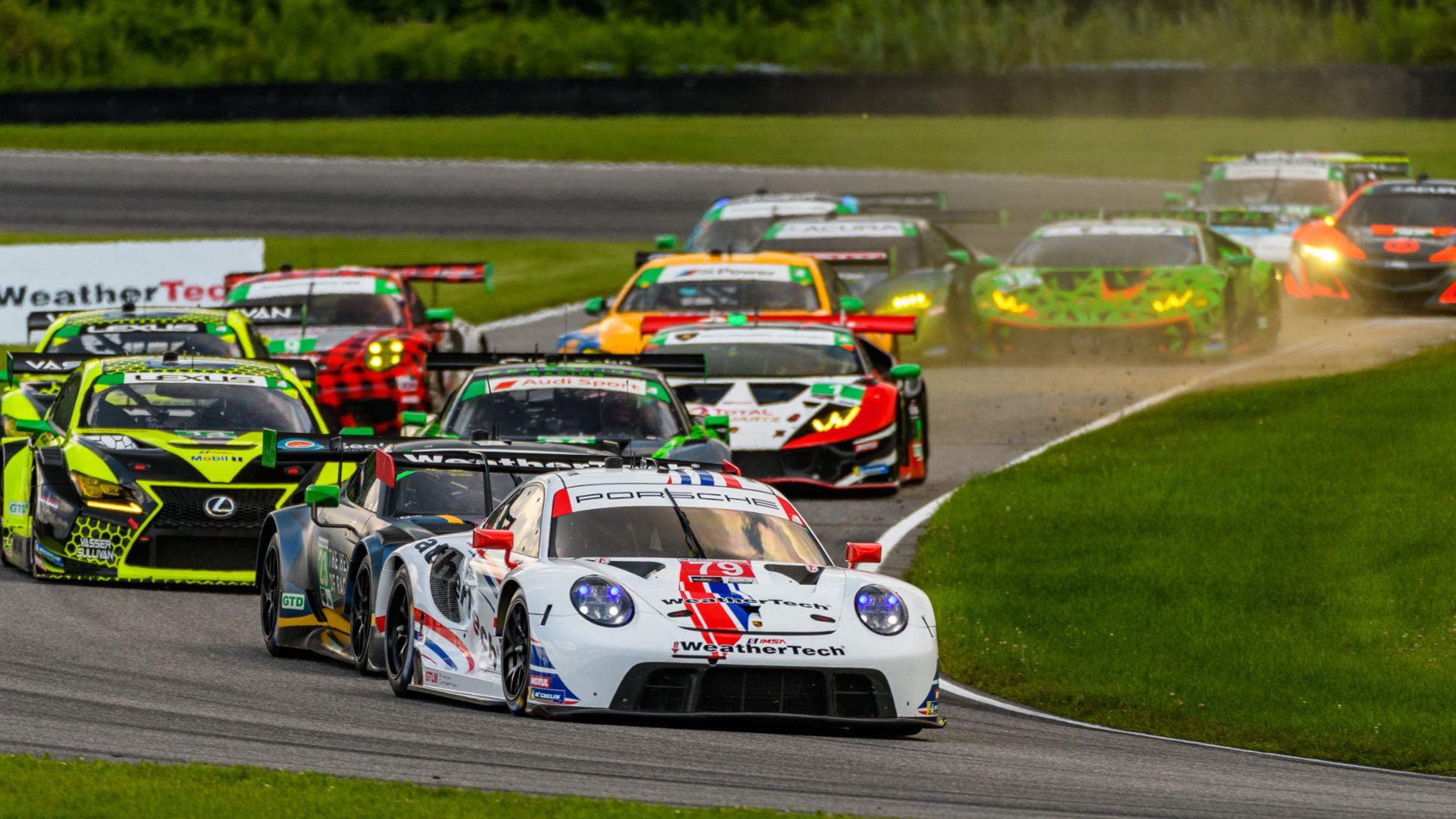 August on the IMSA WeatherTech SportsCar Championship schedule brings only one event, but it is at a destination venue: Road America. Porsche customer teams come to the Elkhart Lake, Wisconsin-track seeking the German sports car manufacturer’s 14th class victory on the 4.048-mile road course. On August 5 – 8, America’s National Park of Speed plays host to the IMSA SportsCar Weekend, where Porsche will challenge for GTLM and GTD class wins in the headlining WeatherTech SportsCar Championship round on Sunday, August 8.

The No. 79 WeatherTech Racing Porsche 911 RSR-19 is seeking its second GTLM class victory of the six-race old season. The mid-engine, normally aspirated Porsche will be piloted by Cooper MacNeil (Hinsdale, Illinois) and Porsche factory ace Matt Campbell (Australia). Campbell earned his first IMSA victory here in 2019 while MacNeil raced to a GTC class win in 2012. The pairing, joined by Mathieu Jaminet (France), won the Mobil 1 Twelve Hours of Sebring in March. Coming to the mid-point of the season, WeatherTech Racing sits in third-place in the class team championship.

Immediately following the race, the Proton Competition-managed team travels to France for the 24 Hours of Le Mans. MacNeil will be joined by factory drivers Earl Bamber (New Zealand) and Laurens Vanthoor (Belgium) in the No. 79 racing for LMGTE-Pro class honors. The grandfather of all sports car races is scheduled for August 21 – 22.

The GT3-spec, rear-engine Porsche 911 GT3 R will have three opportunities to reach victory lane at the 14-turn facility. Pfaff Motorsports returns to Road America in pursuit of a second Elkhart Lake-win. In 2019, Zach Robichon (Canada) joined with Campbell for the win, but it is Porsche factory driver Laurens Vanthoor who will team with the Canadian in 2021 behind the wheel of the No. 9 “Plaid Porsche”.

“I am looking forward to this weekend. I thoroughly enjoy the track. I have been there a couple of times in IMSA and won the race in GTD in 2019. It is a special one for WeatherTech. It is a home event for them, so we hope to have a fantastic result and a good showing for everyone coming to the race from the company. We hope to have a good result and continue the progression.”

“Road America is our home track and one of my favorites. We were in a position to win with our Porsche being the fastest car on the track prior to the stoppage at Lime Rock. Hopefully we can keep that performance going this weekend.

Road America is a high-speed track with some really great corners. The combination of turns and the speed from Turn 5 to Canada Corner is unlike any track on the planet. There is very little track time for practice, so we will have to get the No. 79 WeatherTech Porsche dialed-in pretty quickly. Matt has been there, and it is the track that I have most laps at out of any on our schedule. I am looking forward to having a great weekend.”

“Going into Road America, we know that this is a strong track for our team. We had some great execution at Lime Rock that we can carry forward, and with Zach and Larry [Laurens] behind the wheel, we’re expecting to unload and be pretty quick out of the gate. The Motul Pfaff Porsche 911 GT3 R has been showing some exceptional pace, and with a circuit as fast as Road America, we’re just excited at the opportunity to focus and return to form in this latter half of the season.

“I’m very much looking forward to Road America. Obviously, I’m still recovering from the [non-racing] accident at the Spa 24, but I'm feeling much better and everything should be fine. Road America is one of my favorite tracks on the calendar. It’s a very exciting circuit. I've had enough of bad luck situations, I want to win. It's a good track for us. The team has been doing well lately, so it's time to take fortune in hand and turn this thing around to start winning this championship.”

“For Road America, we’re looking to build on the many positives we had in the last round. As different as they are, there are actually a lot of similarities between Lime Rock and Road America. So, for me, it's just about continuing that momentum and executing in the race just as Larry and I were able to in the last weekend. There’s some higher degradation that will play well into our hands, and everyone at Pfaff Motorsports has been performing at their peak ability, so I’m really looking forward to getting back at it with the team.”

“Road America’s long straights and flowing corners make it one of my favorite tracks to visit in the world. The racing is always fierce when we stop off here. We will be hard at work to quickly dial our setup and hone-in our long-run pace. I am excited to get after it.”

“Dwelling on past rounds is generally not the way to move forward, especially in the midst of a championship hunt, but I think this Wright Motorsports/1st Phorm team is motivated for redemption - I know I certainly am. I’m excited to get right back to work with Pat and the team at a race track that seemingly suits the 911 GT3 R quite well. The strength and resolve this organization has shown all year long is pretty remarkable, the desired results will come as long as we keep doing what we are doing.”