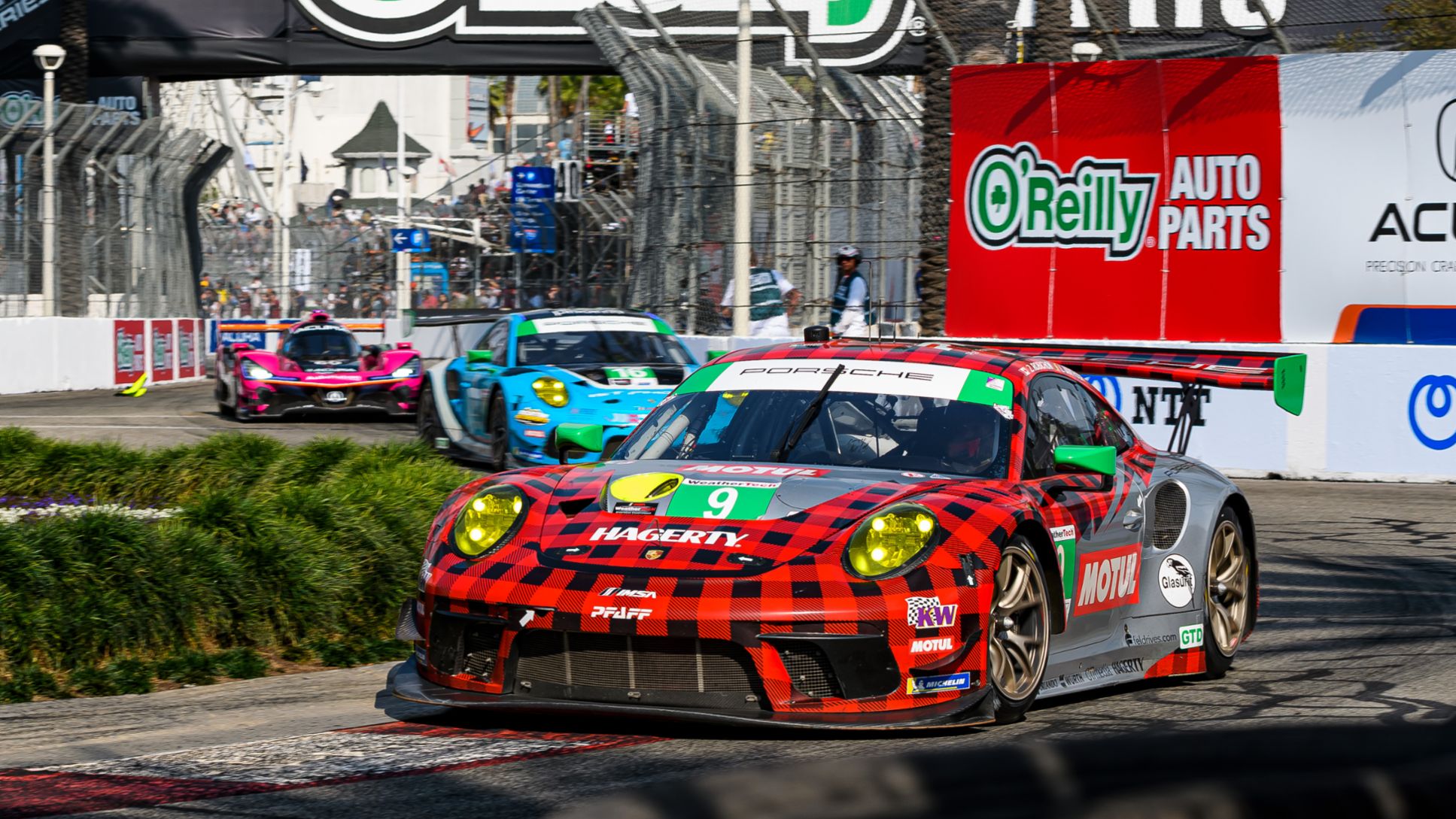 Pfaff Motorsports moved the No. 9 “Plaid Porsche” to the top of the GTD class championship point standings following a hard-fought second-place finish at the Grand Prix of Long Beach on Saturday, September 25. The 100-minute race – the shortest of the season for the IMSA WeatherTech SportsCar Championship – on the temporary race course through the streets of Long Beach, California also saw the No. 16 Wright Motorsports Porsche 911 GT3 R continue its podium streak finishing in third-place. In the GTLM class, the Proton Competition-managed WeatherTech Racing No. 79 Porsche 911 RSR-19 also brought home a third-place result.

Pfaff Motorsports, with drivers Laurens Vanthoor (Belgium) and Zach Robichon (Canada) started fourth on the grid as a result of Robichon’s lap time in the first of two GTD qualifying sessions. In the second session – which is to provide qualifying points while session one sets the grid – Vanthoor turned the fastest lap time providing a vital 35-points for the championship. The young Canadian drove the first stint of the race adding a further points gap when the then championship-leading BMW made contact with the wall and was forced to stop for repairs. The former IMSA Sprint Cup and Porsche one-make champion handed the naturally-aspirated, flat-six-powered Porsche over to “works” driver Vanthoor with just over one-hour remaining. Vanthoor raced his way back into the top-five as various pit strategies of the one-stop race came into play. The 2019 Long Beach GTLM class winner then fought passed fellow factory driver Patrick Long (Manhattan Beach, California) in the No. 16 Wright Motorsports Porsche to slip into the top-three. With 13-minutes to go, the red and black plaid liveried machine was guided into second-place where it finished. The strong run – which came after a late Friday night precautionary gearbox change – gives Robichon/Vanthoor a 32-point lead over the race-winning Paul Miller Racing Lamborghini of Bryan Sellers (USA) and Madison Snow (USA) entering the final two races of the season. Pfaff has earned three-wins, including the two races proceeding Long Beach this season (Sebring, Road America and WeatherTech Raceway Laguna Seca).

The third-place finish by Long and Trent Hindman (West Long Branch, New Jersey) provided the Ohio-based race team valuable points as well. Long is now 207-points behind in the driver standings with the blue and black Porsche still searching for its first win of the season. Saturday’s race was the team’s third-straight podium finish in the Pro-Am style class.

Next, the IMSA WeatherTech SportsCar Championship travels to the picturesque VIRginia International Raceway (VIR) for the penultimate round of the GTLM and GTD championships. The two-hour, 40-minute race for GT cars-only will run at the Alton, Virginia-area track on Saturday, October 9. This marks the second, and last, time this season that the Porsche 911-based race cars will have the opportunity to challenge for overall victory – the first being Lime Rock Park. Both the Michelin Pilot Challenge – for GT4-based machines – and the premier one-make Porsche Carrera Cup North America Presented by the Cayman Islands will join the WeatherTech Championship at VIR with races scheduled for Sunday, October 10.

Mathieu Jaminet, Driver, No. 79 WeatherTech Racing Porsche 911 RSR-19.
“We were waiting for a yellow that never came. The car was good, I think the best it was all weekend. For me, it was a really good experience. I really enjoyed it because it was my first time in Long Beach. It was just a shame there wasn’t a yellow to try and fight the Corvettes. That is racing sometimes. The level of the drivers is very good so not many yellows out there.”

Cooper MacNeil, Driver, No. 79 WeatherTech Racing Porsche 911 RSR-19.
“Tough race. We really struggled early on with super low grip. The Michelin tires were OK but took a long time to come up to the operating window. We needed a yellow that never came. Another solid effort by the WeatherTech Racing Proton Team. The next one is VIR where I am looking forward to welcoming Kevin Estre back into the car and going for an overall race win.”

Steve Bortolotti, Manager, No. 9 Pfaff Motorsports Porsche 911 GT3 R.
“It was certainly a challenging weekend. The team did a great job of pushing through adversity. We had a gearbox issue all day Saturday. It didn’t affect our performance; it was more of a reliability concern. We worked until the wee hours of the morning to address that. I am really proud of the whole Pfaff Motorsports team for working together to make sure people got rest, but the work got done also. I can say that is a big improvement over years past when we just had everyone here late. Second-place was exactly what we needed, and the championship lead is just a feather in the cap. VIR will be an interesting race for us. It has not always been our best track as a team so we will see how that goes. Same at Petit. So, we will have to get the monkey off our back at those two last races and finish this championship off.”

Laurens Vanthoor, Driver, No. 9 Pfaff Motorsports Porsche 911 GT3 R.
“A good weekend. Maximum points in qualifying and second in the race. So, can’t complain. At one point we were not in a great position in the race, but we managed our car back up to second-place. That gave us the championship lead which I think is important with two races to go. The margin is small to the others so there is still nothing at all won. Days like these we didn’t nail the strategy and we were not in a good position, but we managed to climb back and minimize the damage and, therefore, it was a good weekend.”

Zach Robichon, Driver, No. 9 Pfaff Motorsports Porsche 911 GT3 R.
“We need to thank the guys. They were up until 2 a.m. last night changing the gearbox. We came into a track that was new for the team and new for me and we executed all weekend. We were quite confident we could have a strong race. But obviously anything can happen in a race. I am very, very happy with our result and what the team did just to make sure we were on track today. At the end of the day this puts us in the lead of the championship for the first time. We are not in the business of losing spots in the championship but there are two races to go. Some added pressure on us but I think we can brush that off and try and just keep moving forward. It will be about keeping our same mentality for the rest of the year.”

Patrick Long, Driver, No. 16 Wright Motorsports Porsche 911 GT3 R.
“It was typical street racing: hard-nosed. We had a good balanced car. I was fighting with the 14-car and I tried to square him up and get a run onto the back straightaway and unfortunately clipped the inside wall and lost a position. Gathered it back up and fought back to a podium position. I am happy to salvage that to go three in a row with podium finishes but we wanted to be a little further up the box. I am so proud of these Wright Motorsports guys. The pit stop was unbelievable. I am pretty confident that we had one of, if the not the best, pit stop of the race. That is what got us into clean air and gave us a shot at the end. We will fight all the way to the final race.”

Trent Hindman, Driver, No. 16 Wright Motorsports Porsche 911 GT3 R.
“Everyone on the 1st Phorm Wright Motorsports team should be proud today. Qualifying was rough, rough to say the least. For the guys to be able to pull through with the job they did on pit lane and the speed of the car they put underneath us, they should be really proud. We are really pleased we were able to bring home a podium today and salvage a good result of what was, otherwise, looking like a tough weekend.”

Rob Ferriol, Driver/Owner, No. 88 Team Hardpoint Porsche 911 GT3 R.
“We feel really good. We felt like we left a lot undone at Detroit with our rather early end to the race. We knew we had a good car for a street race based on what we had done at Detroit, and we felt coming into the weekend we were going to be strong. It’s a Porsche track, and we as a Porsche team are getting smarter. We showed that through practice and had a bit of a bobble in qualifying. But for the race, if we had an opportunity to qualify better, we would certainly have had a better finish because Katherine was the class of the field working her way through. I managed to pick up a couple of positions in my stint, so I’m happy. We moved up six spots over the course of a 100-minute race at probably one of the hardest tracks to pass on. Seeing Katherine out there running fast lap after fast lap was a great moment for us on the timing stand, knowing how hard we continue to work week in and week out. Despite what position we were in at the time, to see her being the fastest car on track was really good for us.”

Katherine Legge, Driver, No. 88 Team Hardpoint Porsche 911 GT3 R.
“The team did a really good job and gave me a really good car. We were just unfortunate, honestly. We were hoping for a yellow, we were praying for a yellow. We wanted to catch the pack and go fight them because we had a good car, and we could have done it. Both Rob and I made a couple of strong passes, and the car was strong so on pace we should have finished a lot further up. It just wasn’t to be today. Having said that, look how far we’ve come since the beginning of the year. We’ve worked really hard on the setup and the tire side, where we haven’t been so strong on qualifying and at the start of the runs. We’ve always been stronger toward the end of the runs. We’ve been working really hard at putting together a better all-around package, and the team knocked it out of the park on this one.