Jock Zonfrillo: Food for thought - Are you what you eat?

Eating responsibly - How firebrand Adelaide chef and Porsche enthusiast Jock Zonfrillo is helping shape Australia’s food future by looking deep into its past.

Jock Zonfrillo is about the last person you might expect to find on a mission to define Australian food. Heavily tattooed, and with a vocabulary so naturally peppered with swearing he makes Gordon Ramsay look like a primary school teacher, the Scottish-born chef looks the type more likely to be marooned forever on dishwashing duties than he does the head chef and owner of one of Australia’s most celebrated restaurants.

But looks can be deceiving, and as anyone who has spent more than five minutes in Jock’s presence, his fiery passion for food and Indigenous Australian ingredients and culture coming off him in almost visible waves, will tell you, he’s the real deal. Which is why it isn’t overly surprising when we first find him foraging deep in what looks a lot like overgrown weeds - usually a job for a brave gardener, not a chef - by a river on the outskirts of Adelaide in South Australia.

Jock disappears for a moment, his head vanishing behind the chest-high growth, before reemerging with a thick handful of wild river mint (a unique hybrid of peppermint and spearmint), Australian watercress (surprisingly peppery, a bit like rocket on steroids), two different types of sorrel and a scattering of other local greens. He’s waving the bunch towards us, a huge grin now splitting his face.

“Now that’s a salad right there,” he shouts. This nondescript river and its largely unimpressive greenery feel a long way from the refined luxury of Jock’s celebrated Restaurant Orana in central Adelaide, where diners can pay close to $300 per head for a 16-course tasting menu filled with more than 40 Indigenous ingredients most will have never heard of. But amazingly, the food they’ll eat (or some of it, at least) is identical to the greens currently clutched in Jock’s fist. A full-time indigenous forager and cultural advisor employed by the restaurant has collected this very river mint and watercress to be served in Restaurant Orana for the past six years.

“But it’s still growing here,” Jock says. “And there’s a reason for that. It’s because we take care of it. We take just what we need and then we re-seed it. Our team takes the seeds, dries them for a day, and then goes out and manually propagates them, usually in areas they wouldn’t normally get to.”

If you look at aerial photographs, much of Australia’s sunburnt centre looks utterly empty, save the endless acres of dry, red dirt, and the occasional mob of kangaroos sending it skywards in little cloud puffs as they bound across it. It’s a landscape so barren, so inhospitable, that it often doubles as a perfect set for filmmakers looking to replicate some distant uninhabitable planet (the movie Pitch Black was filmed just outside the town of Coober Pedy, for example), and you can’t help but wonder how anyone - anything - could survive, let alone thrive, in these never-ending fields of harshness.

But we know, of course, that much like with Jock himself, those appearances are deceiving. For more than 60,000 years, Indigenous Australians have lived off the unique bounty this land produces, the planet’s oldest surviving civilisation turning this country’s dry and dusty planes into an endlessly nourishing food bowl.

That history could, and should, be woven into the very fabric of the country, in much the way it is in Italy or France. And yet Australia’s modern cuisine features almost nothing from this country’s traditional owners, with local finds like warrigal greens and jilungin leaves swapped out long ago for iceberg lettuce from California and imported green tea from Japan. And of the many things that make Jock angry, that’s at the top of the list. And for a man that constantly gives it to you so straight it’s like he was born without a filter, an angry Jock is one hell of a thing.

When he boarded a plane to Australia more than two decades ago - a fresh start after the highs and lows of London brought him both a stint in the Michelin-starred kitchen of revered chef Marco Pierre White, and a battle with addiction that’s now long behind ingredients would be on menus everywhere.

The reality, though, was a little different. “As a European coming into Australia, I had always imagined there’d be this plethora of ingredients I’d have never heard of before, simply because I knew of Indigenous Australians belonging to the world’s oldest surviving culture,” he says. “My presumption, pretty naively as it turns out, was that everyone had been playing nicely, and that therefore there’d be a bunch of ingredients that would be completely foreign to me.

“But what I saw when I came here was the exact opposite. It was schnitzels and salt and pepper calamari. There were still amazing restaurants, be they French or Japanese, but where were the Australian restaurants? “Then when I startedscratching the surface, and I started to see the problems, the lack of integration between black and white in Australia, the lack of respect, the underacknowledgement, and the failure to celebrate something that is globally super special and unique.”

But it wasn’t until Jock’s second visit to Australia, this time as a permanent move, that a chance encounter alongside Sydney’s Opera House would change his life forever.

He was burnt out, had grown tired of cooking European food in high-end restaurants (“if I couldn’t cook the food I wanted to cook, then I wasn’t interested in cooking at all”), and his earliest experiences with Indigenous ingredients had been met with scathing reviews and sudden job insecurity. That’s when he met Jimmy, an Indigenous busker playing the didgeridoo by Sydney Harbour in 2001. Jock stopped for a quick hello. Four hours later and he was still there, listening. “I know it sounds kind of bizarre, but it’s true. That chance encounter changed my life entirely,” he says. “We talked about lots of things, of course. But soon enough we got onto the topic of bush food. On just what is real Australian food and culture. And suddenly everything changed.”

What followed became a life mission for Jock. The chef had walked away from kitchens and turned his attention to importing cooking equipment to fund his true calling; spending time on the land with Indigenous Australians, absorbing the world’s oldest food culture like a sponge. “It afforded me the time to go on country and experience the community and talk to people, rather than being glued to a kitchen,” he says. “It meant I could discover, and that’s what I did, and I kept doing up until 2009, when I came to Adelaide.”

Orana (which means ‘welcome’ in some Indigenous languages) would follow in 2013, but the jewel in Jock’s crown remains his Orana Foundation, with a flagship mission of cataloguing Australian Indigenous ingredients, and furthering their use in mainstream cooking. To put the importance of that work into perspective, the Australian Government has its own native ingredient register, with 12 items listed. The Orana Foundation now has more than 1600 catalogued, capturing more information about Indigenous foods than has ever been attempted before.

One example is bunya nut, which is grown on a kind of Indigenous pine tree. The cones themselves are these huge, beach ball-sized green orbs (people can be killed by the 10kg cones when they fall from trees), with each cone containing up to 100 nuts, with the bunya an important historical source of protein for the Indigenous people of NSW and Queensland. There’s restaurant gold hidden in those cones, but they take some work to unearth.

“We first dry the nuts inside their husk, then we crack the nut out of its shell and reconstitute in kombucha. Then we blitz it into a paste and add some cheese mould, let it ferment for about 12 days, and it starts to look like goats cheese. Then we whip macadamia, cashew and sesame seed oil into it, and that makes our bunya nut cream cheese.

“That’s just one example of a traditional food that’s eaten simply cooked for sustenance, but that then comes through the doors of Restaurant Orana where we think about how we can tell the traditional story of this nut, but at the same time give a diner something that they recognise so they’re not out of their depth, and further respect it by making something delicious out it.” That’s but one ingredient, and it’s about two weeks in the making for every dish.

And Jock has 40 more on every tasting menu. From crocodile lardo served with the fruit of a boab tree to crystallised tree sap that’s fermented with fruit juice, to the untrained eye, Jock’s menu looks part exciting, part terrifying. Porsche Cars Australia is proud to count Jock as a brand affiliate, and when we caught up with him he was behind the wheel of his Cayenne E-Hybrid.

It perfectly matches the sustainable vision of his restaurant and Foundation, but also boasts the right combination of capability, flexibility and performance to take him from his CBD restaurant, through the winding roads of the Adelaide Hills he calls home, to hunting for pipis (cockles) with an Indigenous community on Goolwa Beach, two hours out of town.

“Sustainability is a conversation that chefs have been having for a long time. It’s everything we do, from rubbish waste through to the car we drive,” he says. “I’ve had my car for nine months, I go to and from work every day, and I’ve only had to fill it up with petrol twice.”

Long before he represented Porsche, Jock owned a 911 GT2, a car he still misses to this day. “That car was insane.”

Jock’s latest venture is his Australian Flavour Lab, a new space that will employ scientists and chefs to work on developing Indigenous ingredients for broader uses, identifying new flavours, health benefits and commercial opportunities, with a view to spread Indigenous food history far and wide - something he himself will be doing in his new role as a host of MasterChef Australia.

“I would like to imagine Australian food is at the beginning, I like to think we’ve turned a corner where we’re truly acknowledging the first Australians, and really the complexity of their culture and their offering in terms of cuisine,” he says. “When you eat these ingredients, you know these are the flavours of Australia. You can have the best Spanish meal, the best Italian meal, the best  Vietnamese meal here, and it’s epic, as good as what you get overseas. But we’ve also got ingredients here that actually taste like Australia. There’s no question there’ll be chefs that come along after I’ve gone that will do far more interesting things with Indigenous food than I’ve ever done, but someone had to start the conversation.” 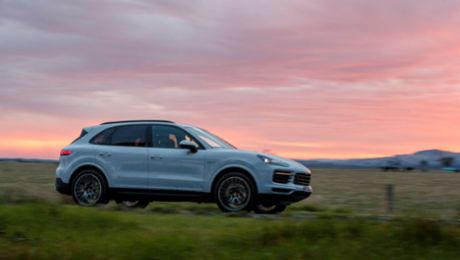 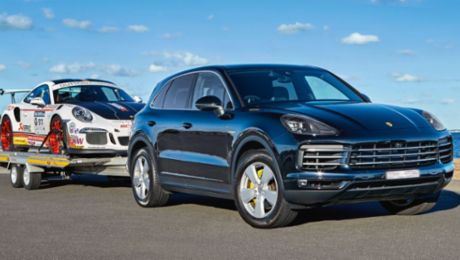 Tow, Tow, Tow Your Boat (or Your Porsche)

Can you tow your boat, or your classic or racing Porsche with a Cayenne E-Hybrid? Now, absolutely.

Porsche has increased the battery capacity of all its Cayenne plug-in hybrid models.