Its strikingly dynamic lines and specially tailored design elements make the new Cayenne Coupé markedly different from the Cayenne. It comes as standard with a 2.16-square-meter fixed panoramic glass roof. With a see-through surface area of 0.92 square meters, the roof creates a unique spatial experience for everyone in the vehicle. An optional contoured carbon roof is also available. It also enjoys all the technical highlights of the third model generation, which boasts the impressive combination of powerful drivetrains, innovative suspension systems, digital display and operating concept, and comprehensive connectivity.

The general contractor for the development of the variant was Porsche Engineering. From the concept greenlighting project phase onward, the company headed up complete vehicle development as well as, with a few exceptions, the development of all component assemblies. The scope of work included not only the validation of the technical properties, but indeed managing production launch at the Volkswagen plant in Bratislava.

By the time of handover in February 2016, the principal technical concept for the vehicle had been defined and passed feasibility testing for later series production. This also involved the preliminary styling concept, which was refined and modified at detail level in subsequent development stages. Manufacturability analyses played an important role in the process. While the dimensions of the glass roof were roughly defined in the greenlighted concept, the geometric details were fine-tuned by Porsche Engineering as development progressed further. These details included connection to the body.

For the development of the Cayenne Coupé, Porsche Engineering created ten digital prototypes, each of which came with different model properties to analyze different overall vehicle characteristics

Thanks to its experience with numerous customer development projects within and outside of the group, Porsche Engineering was able to adopt the project structure and the existing development processes quickly. They were put in place even before the concept was greenlighted to ensure smooth handover. This included defining simultaneous engineering teams with clearly delineated responsibilities for components. Due to the scale of the project, one focus of the project management was orchestrating the interaction of numerous technical specialists. For the development process, Porsche Engineering used the Porsche IT system environment, in which the employees primarily work on separate servers and make the data available at predefined times.

Thanks to the consistent use of digital development instruments, Porsche is reducing the number of physical prototype vehicles needed. The use of physical prototypes from prototype tools is largely omitted in the development of variants in order to exploit time savings and financial benefits. The validation of a non-physical development process is largely conducted with digital tools, albeit supported by two manually assembled mule units for the chassis and electrics/ electronics. The latter is necessary in order to account for electromagnetic compatibility requirements in the dimensions of the series vehicle—even minor variations in the geometry can change the shielding behavior.

For the development of the Cayenne Coupé, Porsche Engineering created ten digital prototypes, each of which came with different model properties to analyze different overall vehicle characteristics. Validating crash behavior was a key aspect, and was conducted entirely using finite element simulations. Because of glass’s particular crash behavior, the model for the glass roof—especially the bonding points—required adjusting in advance through substitute tests. Bodyshell stiffness testing was also performed purely mathematically. The results of these calculations led to individual measures such as additional stiffening and the shifting of connection points.

In order to analyze installation space on the body, for instance for routing wires, the engineers maintained a physical design check model throughout the development process. This was particularly important for the rear area, where adequate headroom for passengers had to be assured in spite of the sloping roofline.

The design of the aeroacoustic vehicle characteristics was done by way of a substitute test as simulation models are not yet capable of providing sufficiently precise results. A clay model was tested in the Porsche wind tunnel in Weissach, making it possible at an early stage to identify potential sources of noise caused by the contour of the exterior shell. The aeroacoustics question also demonstrates the limits of non-physical development, however: A final decision concerning the acoustics in the interior can still only be made by getting in the vehicle and driving it.

The simulation results were validated exclusively with preseries vehicles built of components made with series production tools at the production facility in Bratislava. The production of the first preseries vehicles was brought forward roughly three months compared with a physical prototype-based development process. The development scope handled by Porsche Engineering also included the subsequent cold- and hot-climate tests. As part of the first cold-climate test, the developers also simulated variant-specific misuse cases in order to test the performance of the glass roof. In large glass surfaces, internal stresses from the manufacturing process can cause stress cracks—especially in the edges—if exposed to stark temperature fluctuations. Through intensive checking for internal stresses, a high degree of quality was achieved for the Cayenne Coupé glass panes at an early stage and no stress cracks occurred in test operation. Porsche Engineering’s validation process also included endurance testing, which followed the usual test program as defined by Porsche.

Challenge of the glass roof

Due to the dimensions of approximately 1,800 x 1,300 millimeters and the large bending radii due to the sloping roofline, developing the glass roof was a particular technical challenge. The task was to work together with the suppliers to develop appropriate production and assembly processes for the laminated safety glass and the complete roof including the blinds.

The production process begins with independent cutting and edge polishing processes for the two panes, after which they are given their curved shape in a press-bending process. The permanent bonding of the two panes with a polyvinyl butyral (PVB) film between them is done in an autoclave. The glass roof is then given two coats of foam around the edges, with the inner ring used to fasten and seal the blind mount. A process step of this type had never been conducted on a glass roof of this size before, so the required tools also had to be newly designed for the purpose.

For the glass roof, new production and assembly processes were developed in collaboration with the suppliers.

In the final vehicle assembly process, the Porsche Engineering developers took particular care in precise tolerance management. A reference point system is used for the Cayenne Coupé consistently throughout the roof and body’s entire production process all the way down to final assembly. This made it possible to conduct assembly without the need for post-production work. A suitable manipulator had to be developed to handle the 30.4-kilogram glass roof. It picks the roof up in such a way that it can be positioned using centering pins while suspended over the body-inwhite and then presses it into place.

The crash safety, temperature behavior, and mechanical strength of the glass roof were extensively examined using mathematical simulations and component tests beforehand. It was decided early on that the glass roof would be fastened with a double adhesive seam all the way around to ensure maximum strength.

Overall, the testing was very similar to the development process for a windshield, although falling rock tests on a specially prepared test course were added to the proceedings. Moreover, automated endurance trials over 15,000 cycles were carried out on the blind, which due to the roof geometry features curved shaft and a curved draw bar.

To drivers of the Cayenne Coupé, just how much detailed work is behind the most technologically sophisticated glass roof in Porsche history will barely be apparent—and the same holds true even if it needs repairing. Porsche Engineering even devised a disassembly process should the glass roof ever need to be replaced: The roof is removed in a manner similar to a windshield using a cutting wire that severs the adhesive.

Complex detail work, intelligent use of digital simulation methods, and a continuous focus on the big picture: With the new variant of the Porsche Cayenne, Porsche Engineering used proven tools while developing new methods and processes. The result: successful execution of a highly complex project. And above all: the new Porsche Cayenne Coupé. 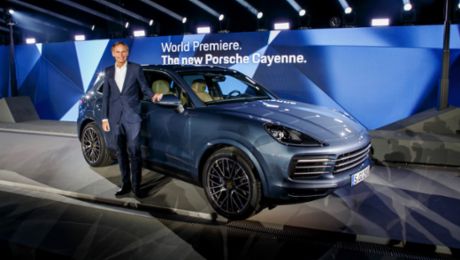 World premiere of the new Cayenne in Zuffenhausen

Porsche is introducing the third generation of the Cayenne.