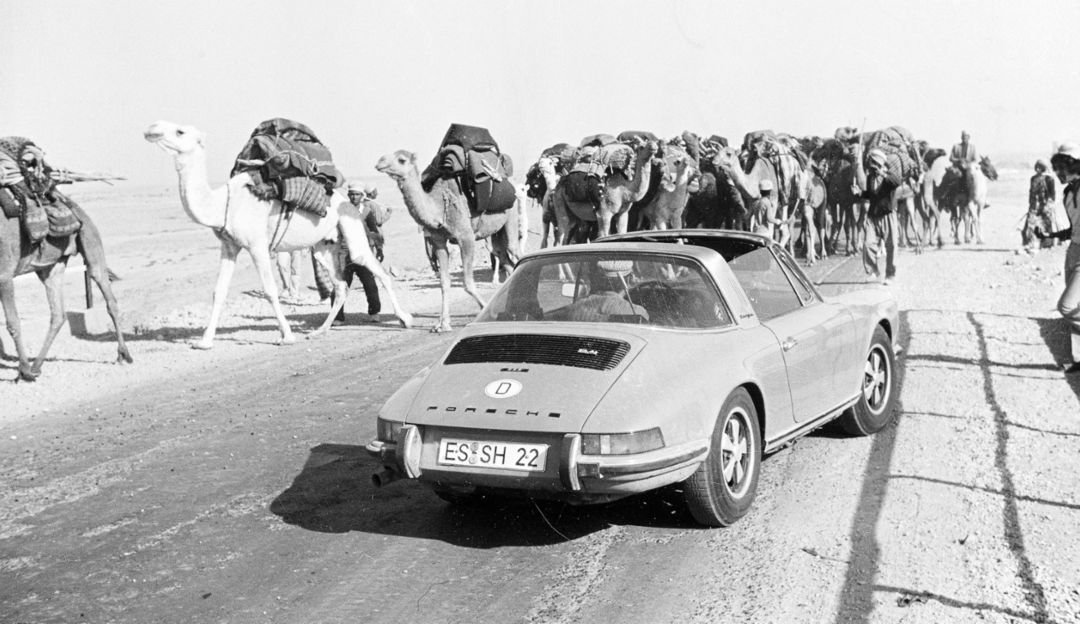 Carole de Gara, Siegfried Hammelehle and Rick Lomba travelled to Afghanistan and back in 1973. Leading vehicle: a 2.4-litre Porsche 911 S Targa. How did such an incredible journey come about? Now, 46 years later, we set off on a search for the protagonists of that time.

Siegfried Hammelehle is a little bit surprised. “Oh, our trip was ages ago,” he says on the phone. That’s true. Forty-six years is an eternity – especially if you consider the route of that time: three people from Germany, the United Kingdom and South Africa drove a Porsche 911 and a Volkswagen 411 from Germany over 27,000 kilometres across Turkey as well as today's Iran and Afghanistan in two months – and back again. Today it is unthinkable, but then, in August and September 1973, long before Iran became an Islamic republic and Afghanistan was an intact state – despite upheaval exactly at the time of their trip – you could dare to embark on such a journey if you had just a little courage.

That was exactly what the three did. The young British woman Carole de Gara, 23-year-old South African photographer Richard E. Lomba, known as Rick, and Siegfried Hammelehle, the 34-year-old textile entrepreneur, a great Porsche fan and owner of the car with which the trip was to be made. For 46 years the story languished in the Porsche archives – it was only published once in an old edition of "Christophorus". A coincidence brought it to light. The visual power of the few black-and-white prints and negatives and the one colour photo immediately fascinated us. And the research started. Where are these people now? The original travel notes of Rick Lomba, the trip chronicler, have unfortunately not been preserved, and he passed away long ago. Carole de Gara got married in England, but making contact proved to be difficult. This leaves the main participant and initiator: a few phone calls and e-mails later and Siegfried Hammelehle was actually located. His brother Walter established the contact and an interview soon followed.

“I was in Kabul for the first time in 1963 during a trip to Calcutta,” remembers Siegfried Hammelehle. He was there because of carpets, which he imported to Germany from all over the world. He was fascinated by Afghanistan, and wanted to travel the country in his Porsche and film it.

But who should be the cameraman? A friend of Hammelehle had an idea: Rick Lomba. The global traveller knew him from his visits to South Africa to see his uncle. Rick had been eight years old at the time, and now – in 1973 – he was studying film and theatre in England. His girlfriend at the time, Carole de Gara, was to join him as an assistant. “I just said, 'if she thinks she can do it, I don’t mind',” says Siegfried. Two films were planned: one about carpets, one about Porsche. And so the three of them left on August 5, 1973.

As for the journey itself, the three adventurers took no more than the vehicle toolkit, some spare spark plugs, oil filters and V-belts in their luggage. At some point they stopped counting the damaged tyres. But nobody got hurt. Temperatures of 50 degrees Celsius and higher in the rocky desert near Mount Ararat, and even higher temperatures in Afghanistan in the Daschte Margo – the so-called 'desert of death' with temperatures exceeding 60 degrees Celsius and absolute dryness – left deep marks in the travellers’ memories. While the Porsche ran like clockwork, the Volkswagen, which was already ageing at the time, had major problems with engine mounts, compression and electronics. However, it underwent extensive repairs in Tehran and then a talented mechanic in Erzurum in Eastern Anatolia worked on it. With a few pliers and wire, he managed to get the car going again so well that it lasted all the way home. On September 30, 1973, exactly 56 days after setting off, they reached the start point of Altbach again.

And then? The travel companions each went their own way. Siegfried's contact with Carole broke off, and with Rick it was sporadic. The film about carpets was actually broadcast by SWF, a regional broadcaster in south-western Germany, the one about Porsche sank in the Mediterranean along with the yacht of the responsible editor. Siegfried Hammelehle now lives happily with his wife and a 1970 Porsche 911 T in the Esslingen district in Germany.

Paul Higgins’ quiet passion for Porsche remained alive over the decades, and he took the term sports cars literally.

The Gmünd 356 models almost received a 'genuine' Porsche engine. The No. 367 was the result of an extended evolutionary process.