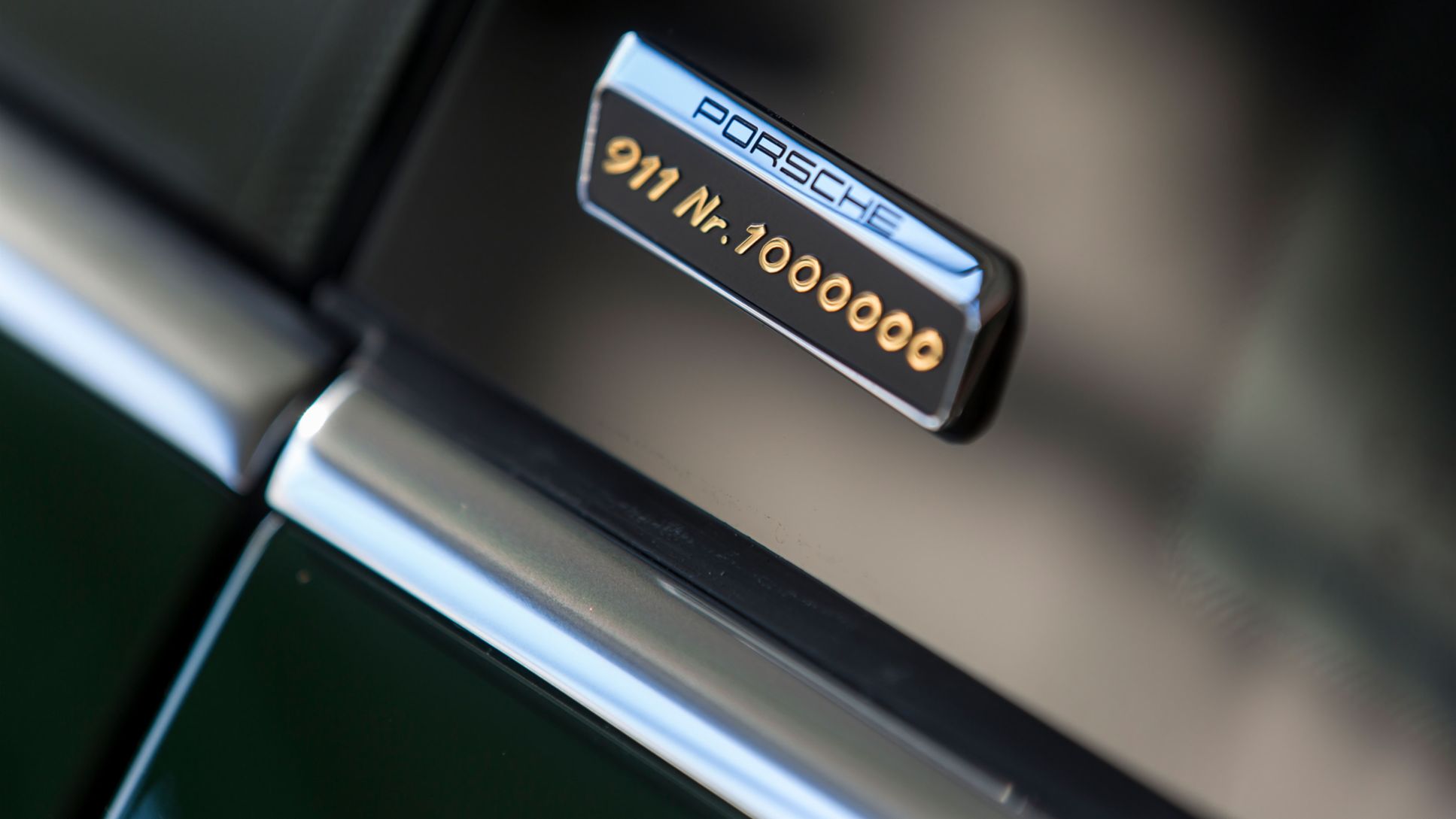 The one millionth 911 is a one-off piece. Built at the Porsche headquarters and intricately refined by Porsche Exclusive. The details.

New record for the Porsche 911: On May 11, 2017, the sports car icon marked the production of the one millionth vehicle. For nearly 54 years, the Porsche 911 has been at the heart of the Porsche brand and has played a major role in its current success. There are very few other cars in the world that can look back on such a long history of tradition and continuity or that have achieved as many race victories. Manufactured in Zuffenhausen right from the start, each generation sets new standards in terms of driving dynamics, efficiency and everyday convenience.

The one millionth 911 is a one-off piece. Built at the Porsche headquarters and intricately refined by Porsche Exclusive, which has been responsible for adding details to limited and exclusive small-scale series at Porsche for over 30 years. The anniversary Coupé contains the quintessence of over half a century of 911s: Sporty, yet suitable for everyday driving; powerful, yet efficient; exclusive, yet timeless. The sports car model is based on the 911 Carrera S, with a power-boosted 331-kW (450-hp; Fuel consumption combined 9.4−8.3 l/100 km; CO2-emissions 214−188 g/km) flat engine and a seven-speed manual transmission.

A one-off with historical accents

Painted in the special colour “Irish Green” and individually equipped with leather seats whose centres feature the original pepita pattern from 1964, this unique car is reminiscent of Ferry Porsche’s first official 911. The company founder had one of the first series cars with the chassis number 300.003 painted green, his favourite colour. He was presented with the car on October 19, 1964. In the 1965 model year, Irish Green was finally included as a new paint colour in the colour scheme, and can still be ordered as an individual colour at Porsche today.

The anniversary vehicle features exclusive handmade seat covers as well as numerous other individual details. The instrument cluster will feature the lettering “1,000,000 911” and the numbers and lighting appear a shimmering green. The circular instruments have a silver surround, just as in the 1964 archetype, as does the Sport Chrono clock. Another unique finishing touch is the sports steering wheel with a Porsche crest from 1964 on the hub. The handmade mahogany rim is reminiscent of the wooden steering wheels that were still a must for sports cars in the 1960s. The crest on the bonnet is the same crest that featured on the original 911. The wheel hub covers feature the “911” label. The PORSCHE logo appears in white on the black-painted brake callipers and in gold on the rear lid. Badges with the “1,000,000” logo (on the B-pillar on the exterior, on the dashboard trim strip in the interior) indicate the special status of the anniversary model.

Further refinements emphasise the timeless sporty elegance and exclusivity of the sports car icon. The outer shell of the Sport Design exterior mirrors, the exterior door handles and the slats of the air intake grill on the rear lid shimmer in Galvano Silver. The strips around the side windows are made from matching aluminium. As a homage to the legendary Fuchs rims that characterised the image of the 911 for decades, the unique model is equipped with 20-inch Carrera sports tyres in the classic design. In the interior, the experts from the Porsche Exclusive workshop have used all of the leather options that are available for the 911. The switch panel has mahogany accents. These distinguished details are also a tribute to the very first 911.

When it comes to technology, the anniversary model represents the leading position of this best-selling sports car. Outstanding product features and quality guarantee that the almost proverbial customer satisfaction will apply to the new generation too. At the heart of the 911 Carrera S is a three-litre flat engine with turbocharging. With the performance kit installed, the engine now achieves 331 kW (450 hp; Fuel consumption combined 9.4−8.3 l/100 km; CO2-emissions 214−188 g/km). The package includes such features as larger turbochargers, the Sport Chrono package including dynamic engine mountings, a modified brake cooling system and the sports exhaust system with two central tailpipes in a unique design. This allows the 911 Carrera S to accelerate from 0 to 100 km/h in 4.1 seconds and reach a top speed of 312 km/h. The combined fuel consumption is 9.4 l/100 km.

The 911 Carrera is the benchmark for all-round sports cars in terms of driving dynamics. With each new generation, Porsche continues to refine the exemplary combination of everyday comfort and racing performance. The PASM standard chassis with ten millimetre lowering provides outstanding cornering stability thanks to the highly developed damper generation combined with relaxing long-distance comfort.

The 911 was and always will be contemporary. This is due in part to a constantly growing range of functions from Porsche Connect Plus. The Porsche Communication Management System (PCM), including online navigation module and voice control, is standard in the 911 Carrera models. Mobile phones and smartphones can be connected via W-LAN.

The one-millionth 911 is not just one of a kind because of its production number; its finish is also unique. The experts at Porsche Exclusive have made sure of this. The in-house workshop specialises in bespoke Porsche modifications. Its range of services includes advising customers who wish to customise their new vehicle, developing special equipment options for each model range, and producing special vehicles and limited small-scale series.

Porsche Exclusive has decades of experience in building individualised sports cars. The first small-scale series was the 911 Turbo “slant nose”, which was built between 1982 and 1989. Its design was based on the 935 racing car. Many of the subsequent projects have become coveted legends. In 1993, for example, only 15 Turbo-bodied Carrera 2 Speedsters were built to special request by Porsche Exclusive. The 911 Carrera 3.6 Speedster of the type 993 is one of the rarest Porsche sports cars ever. Just two units of this model were built, in 1995 and 2000.

The concept behind small-scale series, limited editions and one-off models is a love of detail and craftsmanship in the manufacture and installation of the components. Porsche Exclusive has put together a selection of popular refinements. The Porsche Car Configurator offers more than 600 customisable features across a range of models. Colour and material options are also available. Among the favourite variations are exterior aerokits, sports design packages and modified front and tail lights. Inside, customers prefer leather combined with wood, carbon, aluminium or stainless steel. The Porsche Centres also provide advice on the range and options offered by Porsche Exclusive.  Special requests can be taken care of by one of the international Porsche Exclusive Flagship Dealers or a specialised customer adviser at the Porsche plants in Zuffenhausen and Leipzig. Almost any customer requirement can be fulfilled. The only prerequisite is technical, legal and qualitative feasibility.

The anniversary watch: “One Millionth 911” Datetimer by Porsche Design

In special tribute to the anniversary, Porsche Design has produced the “One Millionth 911” Datetimer. This unique watch, which has typical design features of the 911, is part of the exclusive lifestyle brand’s 1919 collection. The second hand pointer shimmers in the same shade of green as the sports car’s instrument cluster. The “Porsche Design” icon on the instrument dial is gold-plated like the crest on the front of the vehicle. The strap of the anniversary watch is made of the same leather as that used in the original vehicle. Even the stitching features the same yarn as originally used in the sports car interior.

The titanium case and instrument dial are in anti-reflective matte black. A design that harks back to the Chronograph I from 1972: The first product designed by Professor Ferdinand Alexander Porsche for his newly founded design company was modelled on the non-reflective, matte black style of the fittings of the motorsport vehicles at the time. The timeless design of the 911 was also the brainchild of F.A. Porsche.