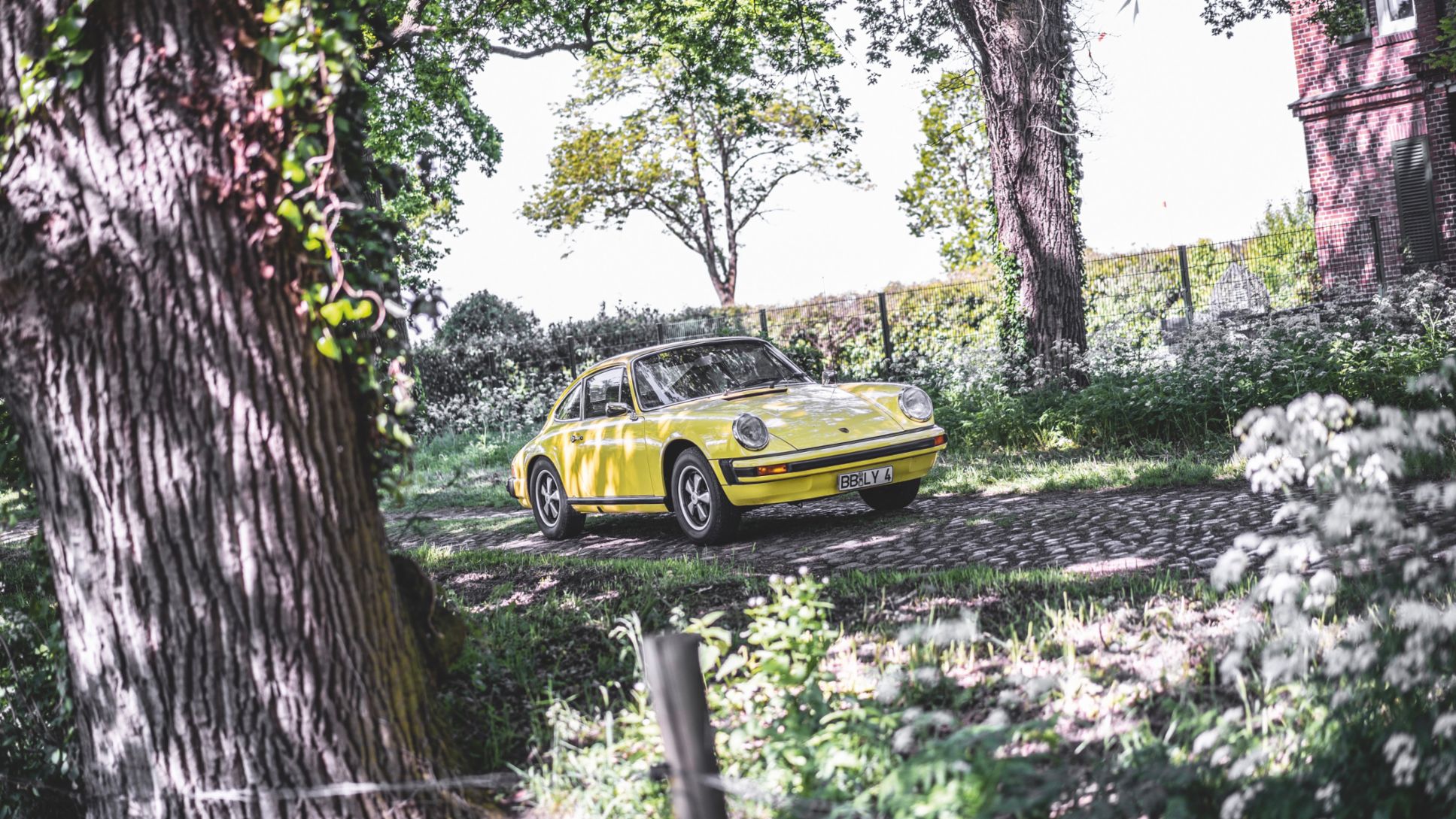 What a shade of yellow! Light Yellow, Porsche colour code B6B6/117. A paint colour reminiscent of the summer, applied to a 1974 Porsche 911 S powered by a 2.7-litre six-cylinder engine with an output of 175 PS and a top speed of 225 km/h. At least in theory. This 911 S actually has a different story to tell. Instead of making the journey from Stuttgart-Zuffenhausen to the port of Emden and then to New York, the US-spec car was taken off the assembly line during production and sent to the Development Centre in Weissach – without an engine, gearbox, engine oil tank or fuel pump. The sports car became a test vehicle –  and probably the first 912 E prototype that could also be driven. It is a car that adds colour to a blank page of Porsche history – and closes a gap in the story of the 912.

Somewhere on the River Weser in northern Germany,  Jan Adams stands next to his 912 E on what is one of the first warm days of the year. Adams is a sommelier, for want of a better word, for selected automotive treasures: a passionate expert who knows just as much about the technology of cars as he does about their history. He restores and repairs them, acts as a broker, buys, sells and collects them. He specialises in classic Porsche and Volkswagen models, but has also been known to search for a Lancia Delta Integrale or other exotic models on behalf of his clients.

A few weeks earlier, his travels took him to Automuseum Prototyp (an automobile protoype museum) in Hamburg, where he first saw the 912 E in Light Yellow. It had been at home in the Speicherstadt warehouse district of Hamburg since 2005. It was obvious that the rear end was housing a 90 PS flat-four boxer engine from Volkswagen – the same as that found in a VW bus, VW Type 4 and VW-Porsche 914. Adams was compelled to buy the car. He wanted to hear what it sounded like, to feel how it drove. Oliver Schmidt and Thomas König, the Managing Directors of the museum, agreed to the deal. Which is how Adams comes to be standing beside the 912 E today. He gets in and starts the engine, ready to unleash the force of history, which sometimes develops only 137 Nm but is also capable of great power. Reduced to the essentials, this is a sports car in its purest form. A car of such uniqueness that it truly feels to have a soul.

The two-litre flat boxer engine sounds like a Volkswagen, but also produces a rich, burbling melody like a well-made T2 bus or a sporty 914. It might not unleash the most raw power, but its power development matches the five-speed gearbox surprisingly well – fascinatingly well, even. At 4,900 rpm the boxer engine screams out and transmits its maximum power to the rear axle. But it no longer has to rev up to these extremes today. Like many older sports cars, it feels most at home when cruising. As a driver, you might even forget the power back there in the rear end. In fact, there’s still quite a 356 feeling to the 911 – even though it is naturally not a 356 four-cylinder in this case. It really is just like it is with the first generation of the 912 (1965 to 1969), but this time in a G Series.

American customers loved both versions of the 912, even if the Type 923 912 E was only on sale for one year – 1976. In this colour, the car could have settled beautifully into a city like San Francisco, where it would have been the perfect partner for driving from Fisherman’s Wharf, past the Golden Gate Yacht Club and up onto the bridge, before heading towards Sausalito and continuing all the way up to Bolinas. This sort of trip was what the 912 E was built for: for US speed limits and the American style of driving that still exists today. But before the first of only 2,099 examples could be sent to the US 45 years ago, the Light Yellow test car had to be put through its paces. Its back-story really begins in 1971, when a plan came into being to develop a new 912 that would be offered internationally as well as in Europe. Records show that there were internal discussions at Porsche about the economic viability and development of the 912 starting in 1972.

These were based on the 911 F Series line – the predecessor of the G Series – but development didn’t make it beyond the prototype stage. The US dealer organisation in particular was not interested in the car initially, because the 914 was already successful as an entry-level model and was not in competition with the 911. An inexpensive 912 would have probably stolen a few customers away from the expensive 911 but a decision was taken in 1974 to launch the 912 E in the US and to cancel its worldwide distribution. The 912 E – now based on the 911 G Series – was to be exported to America for the following reason: the VW-Porsche 914 would be discontinued in 1976, but its successor, the Porsche 924, would not yet be available in the US – unlike in Europe.

This is where the Light Yellow 912 E prototype came into play. It covered a total of 95,471 kilometres on the road and on test rigs. Porsche had not only upgraded the engine with a Bosch L-Jetronic system, but had also equipped the car with secondary-air injection and thermal reactors (reducing CO and HC emissions) as well as an exhaust gas recirculation system (less NOx), fine-tuning it to ensure compliance with US emission standards. Porsche received a Certificate of Conformity With the Clean Air Act from the State of California on 30 July 1975 and the 912 E prototype was retired a year later.

It received a reconditioned engine and was sold to a private buyer from Leonberg – a transaction that was arranged by the then Porsche Head of Development, Helmuth Bott. The car remained in the customer’s family for 29 years before it was sold to Automuseum Prototyp.