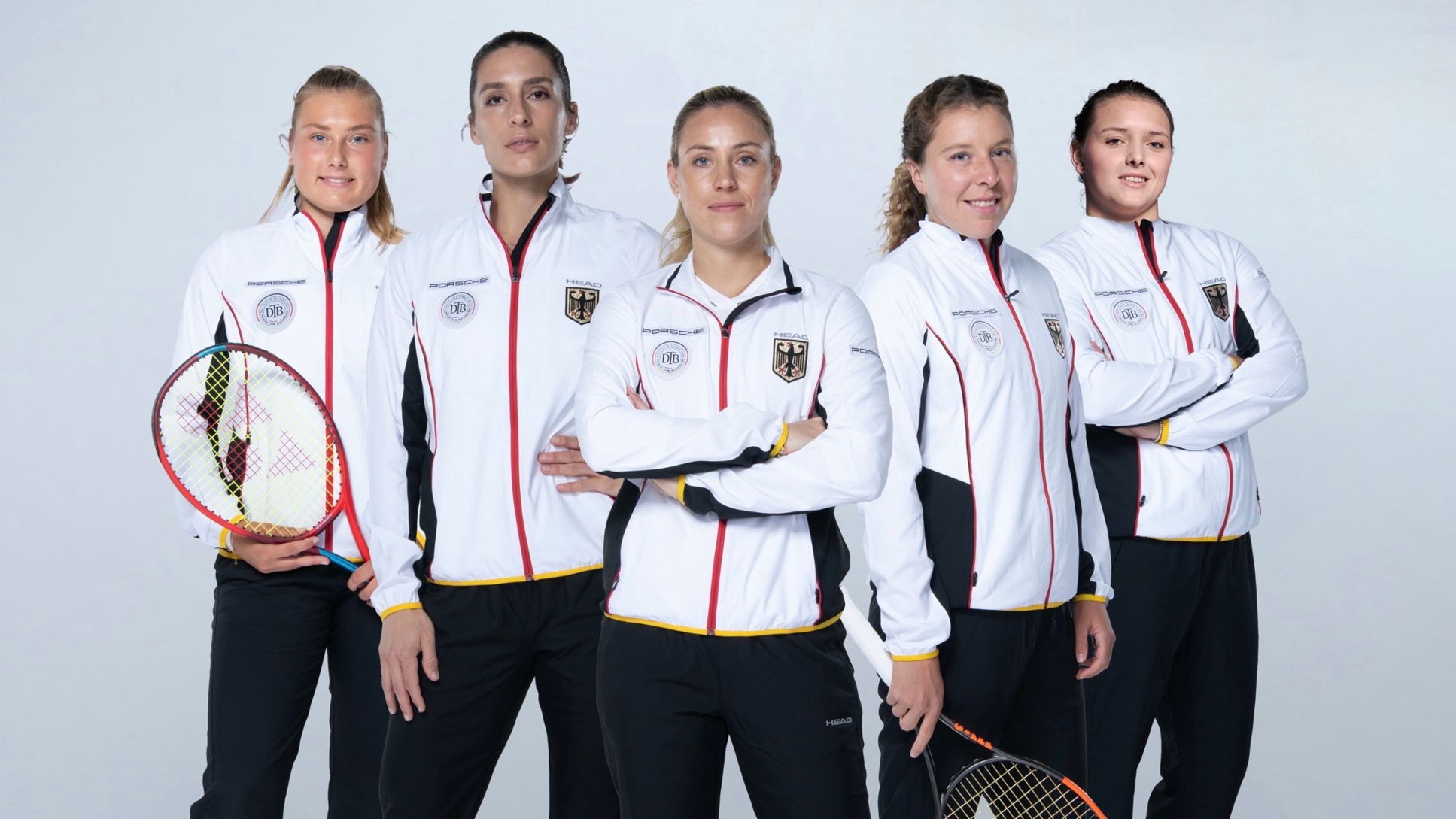 With Angelique Kerber as its number one, Porsche Team Germany will contest the finals of the Billie Jean King Cup scheduled to take place in Prague from 1 to 6 November.

At the finals of the former Fed Cup where the twelve top women’s tennis nations will be competing, the Deutsche Tennis Bund (DTB – German Tennis Association) is pinning its hopes on a mixture of experienced players and highly-promising youngsters. Selected alongside Porsche Brand Ambassador Angelique Kerber are Andrea Petkovic and Anna-Lena Friedsam as well as first-timers Jule Niemeier and Nastasja Mariana Schunk from the Porsche Talent Team. The injured Laura Siegemund is not available. Porsche Team Germany will meet the Czech Republic and Switzerland. “We’ve picked currently the best German players for the finals,” says national coach. Rainer Schüttler. “I’m certain that with this constellation, we’ve got a good chance of progressing from our tough group.”

Porsche Team Germany’s number one is Angelique Kerber. After an unlucky start to the season after being quarantined before the Australian Open, the three-time Grand Slam champion and two-time Porsche Tennis Grand Prix winner then enjoyed a successful comeback. She won the Porsche supported premiere of the Bad Homburg Open and reached the Wimbledon semifinal as well as the last four at the WTA1000 tournament in Cincinnati. She also performed impressively at the US Open.

Nominated 16 times, she is however not the most experienced player in the squad – that honour goes to Andrea Petkovic, who has already appeared 18 times for Germany. “It’s always incredibly motivating to play for a team and to also do so in front of home fans,” says Petkovic. The German has also been in good form recently and won her seventh career WTA title in Cluj-Napoca, Romania. “I know I can beat every player and will take the confidence from a successful summer with me to Prague.”

Two players – Jule Niemeier and Nastasja Mariana Schunk – will be making their debuts for Porsche Team Germany which qualified for the finals by means of a win against Brazil in February 2020. Supported in the Porsche Talent Team, they have earned their chance after producing some impressive displays. “Jule and Nasti have had a fantastic summer and have improved incredibly well,” says Rainer Schüttler. “Jule has made her breakthrough on the senior tour and Nasti was able to gain her first experiences at a world class level.” The highlight for Nastasja Mariana Schunk was without doubt reaching the Wimbledon juniors’ final.

Twelve teams divided up into four groups will contest the first ever finals of the Billie Jean King Cup that were originally planned for Budapest in 2020. The group winners will go through to the semifinals. In Group D, Porsche Team Germany will be up against the Czech Republic (1 November) and Switzerland (2 November).

Hosts are the top favourites

The hosts have won the unofficial world championships title in women’s tennis six times since 2011 – in the 2014 final against Porsche Team Germany. This year too they are seen as being the hot favourite in front of a home crowd. With Petra Kvitova and Karolina Pliskova, two former winners of the Porsche Tennis Grand Prix plus the reigning French Open winner Barbora Krejcikova, they have three of the world’s top players in their line-up. Switzerland’s number one is the Olympic Champion Belinda Bencic.

Doubles wins for Petkovic and Friedsam

Paired by Romania’s Monica Nicolescu, Anna-Lena Friedsam came out on top at the Astana Open in Nur-sultan (WTA250). The win in Kazakhstan was her second doubles title after winning the 2019 Porsche Tennis Grand Prix in Stuttgart alongside Mona Barthel.

Porsche has been sponsoring the Porsche Tennis Grand Prix ever since 1978 and has also been the organiser since 2002. The tournament in Stuttgart’s Porsche Arena was voted by the players as their favourite event in its category once again in 2019. Within the scope of its global partnership with the Women’s Tennis Association (WTA), Porsche is also the title partner of the “Porsche Race to the WTA Finals”, the official qualifying ranking for WTA Tour Finals that will take place this year in Guadalajara, Mexico. The Stuttgart-based sports car manufacturer is also the exclusive automotive partner of the WTA, the season-ending WTA Finals, and this year of the WTA tournaments in Lyon (France), St. Petersburg (Russia), Berlin and Bad Homburg (Germany), Cluj-Napoca (Romania) and Cincinnati (USA). As a premium partner of the “Deutsche Tennis Bund” (DTB – German Tennis Association), the company supports Porsche Team Germany in the Billie Jean King Cup (formerly the Fed Cup) and fosters up-and-coming players in the Porsche Talent Team and the Porsche Junior Team. Angelique Kerber, Julia Görges and Maria Sharapova give Porsche a face in tennis as Brand Ambassadors.