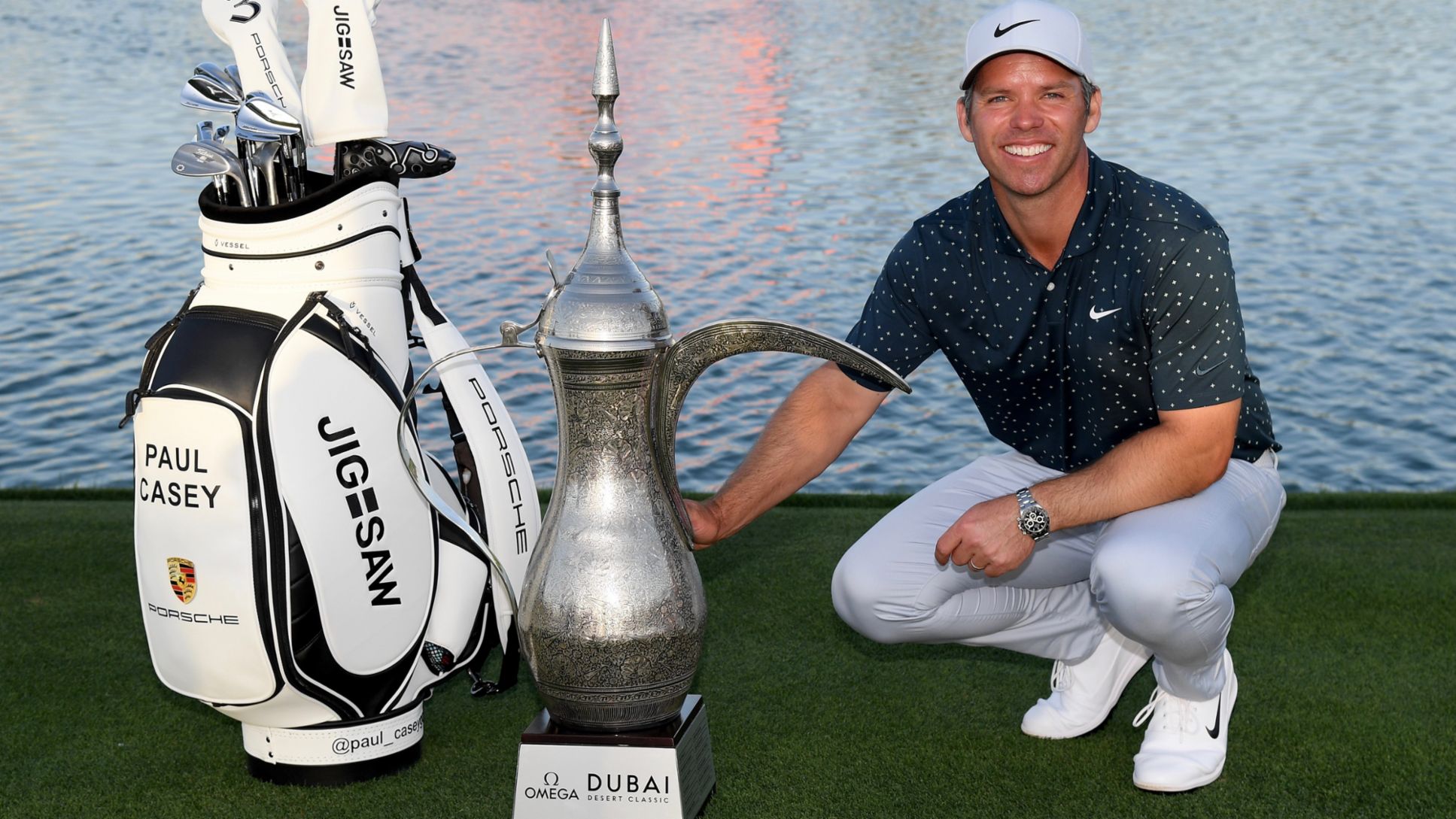 Like almost 17 months ago in Hamburg, Casey went head-to-head with the Scot Robert MacIntyre in the final round – and once again the experienced campaigner overcame the young shooting star. In the world ranking, the Porsche Brand Ambassador is closing in on the world Top Ten once again thanks to his 15th title on the European Tour.

“It’s a really special win in such a world class field,” said Casey. “But I’ve worked hard for it. I’m speechless that everything is going so well right away at the start of the year. And it’s nice being so successful with new partners like Porsche at my side. It’d be great if things continue in the same way.”

Playing in extremely difficult conditions with a strong wind at the Emirates Golf Club, Casey headed the field going into the final day’s play and comfortably defended his lead right into the clubhouse. It was his fourth win in the Middle East, a record in pro golf. He laid the foundation for his first win in his first competition on this year’s European Tour with 29 impressive bogey-free holes when he remained 12 under par from Friday afternoon to Sunday midday. A final score of 17 under par left Casey a comfortable winner by four shots ahead of the South African Brandon Stone in second and MacIntyre five shots down in third. He has now joined a group of golfing greats to have won in Dubai.

The triumph follows an impressive eighth place at the start of the year on the US PGA Tour and is Casey’s first title as a Porsche Brand Ambassador. He has been presenting the Porsche logo on his bag ever since September last year. As an expert and passionate Porsche fan, the 43-year-old has shared his knowledge of golf and sports cars at a number of events. He recently thrilled Porsche Golf Circle members during an online chat in December when exclusively answering the Community’s questions. In doing so, he shone with his Porsche know-how and experience gained from his 20 years as a professional golfer.

Paul Casey has been one of the world’s top players for almost two decades. He was the world No. 3, has recently been a regular in the Top 20 and has won the Ryder Cup on three occasions. The continental contest is, alongside the majors, this year’s big goal for the man from Gloucestershire in south-west England. Now living in Scottsdale, Arizona, he is at home on both the European and the US PGA Tours. He has come closer to achieving the goal after the win in Dubai, a place at the Olympic Games in Tokyo is also a distinct possibility. Casey has already confirmed his participation at this year’s Porsche European Open at the Green Eagle Golf Courses from 3 to 6 June and is looking forward to defending his title in Germany.

Porsche has been the title sponsor of the Porsche European Open, a European Tour event, since 2015 and has been involved successfully in professional golf with automotive partnerships at three tournaments on the Asian and European Tour since 2019. Last year, the sports car manufacturer additionally supported the UK Swing with the European Tour’s “Golf for Good” initiative. Porsche has also been organising the Porsche Golf Cup for more than three decades. The tournament series is one of the company’s most successful customer events and is jointly run by the Porsche centres and the Porsche Deutschland GmbH. Held in Germany for the first time in 1988, the Porsche Golf Cup has developed into an international event at which recently over 17,000 Porsche customers competed in 261 qualifying tournaments worldwide. Also highly successful is the Porsche Golf Circle, an international and app-based community for keen golf-playing Porsche customers that was launched in 2017.

Brand Ambassador as part of the Porsche family

The hole-in-one vehicles at the Porsche European Open are some of the most iconic in sports car history.