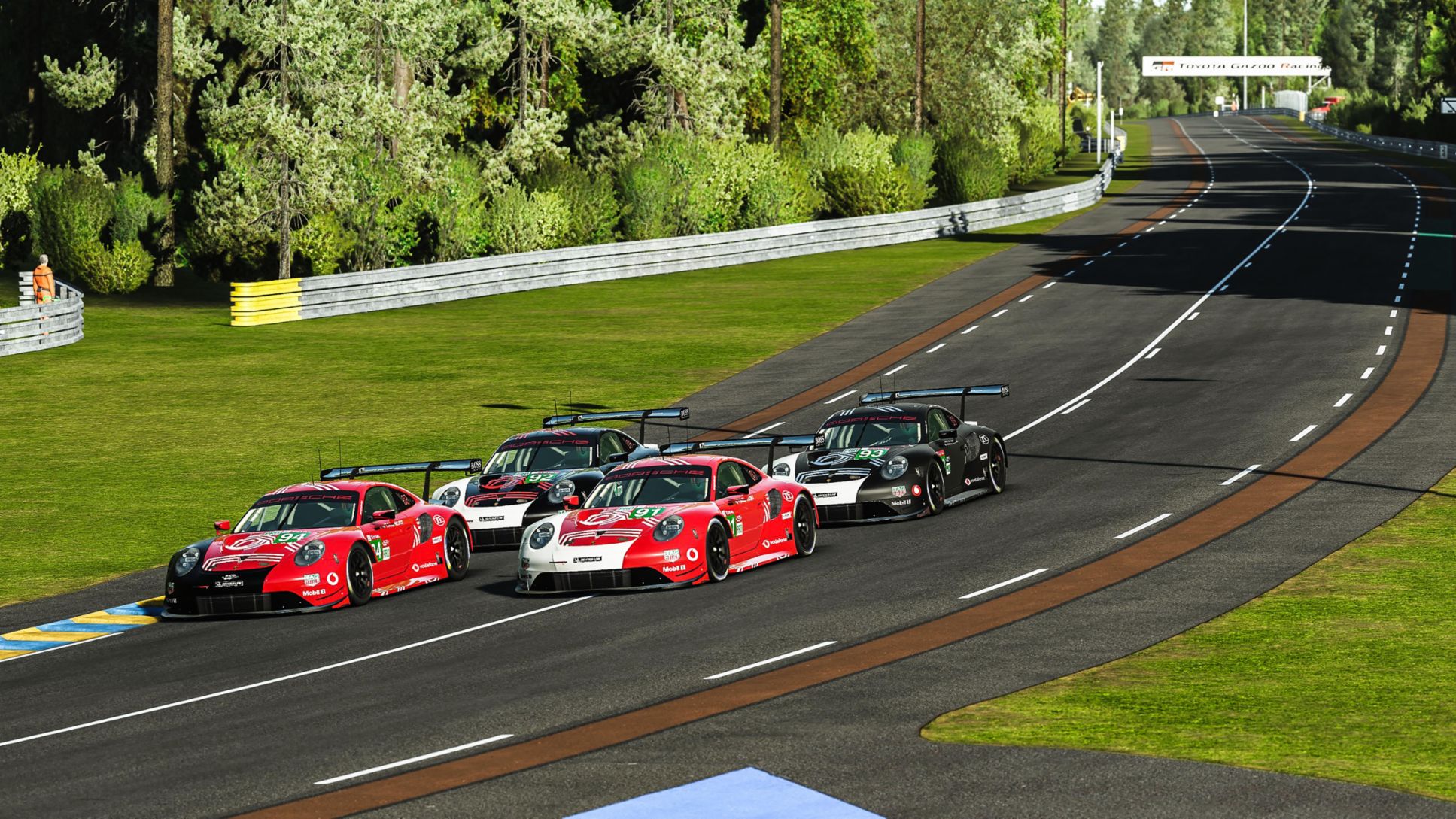 This Saturday, 13 June, the virtual 24-hour race at Le Mans will get underway. The digital version of the world’s most famous long-distance race will also be contested from the Coanda Simsport team HQ in the city of Gronau in North Rhine Westfalia, Germany.

Joining forces with the newly founded Porsche Esports Team for the virtual 24 Hours of Le Mans, Coanda provides eight sim racers who will share driving duties with eight Porsche works drivers in the four virtual Porsche 911 RSR cars. Here, just a stone’s throw from the border of the Netherlands is also where the most important “Battle Rooms” of the globally-distributed centres is located. From this command centre, Porsche Motorsport controls the strategy for all four racing cars.

A visit to Coanda Simsport is surprising in every way. The navigation system leads to a white house on the outskirts of Gronau in northwest Germany. The front garden is as well maintained as the lawns of the neighbouring houses. There is little to suggest that an unusual project is underway behind the front door: Four sim racers from around the world have made this spacious building their home: a flat-sharing community, but meticulously tidy as if their parents were about to visit. Everything seems intense, just like the sim racers themselves. Their training centre is at the edge of the garden next to a badminton court – a garage that underwent extensive renovations at the beginning of the year. The space that used to hold half a dozen cars has been converted into a sim racing headquarters. Before stepping on to the bright purple carpet of the training room, Josh Rogers (Australia), Mack Bakkum (Netherlands) and David Williams (Great Britain) as well as Porsche Junior Ayhancan Güven (Turkey) dutifully remove their shoes and place them in a specially designed cupboard. This is the morning ritual at the start of what is often a ten-hour day in the simulator.

“Like in real-life racing, intensive data analysis plays a critical role if you want to be successful in sim racing.” Philip Stamm

“There’s probably nothing else quite like it,” says an amazed Güven. The young Turkish racing driver from the (real) Porsche Mobil 1 Supercup has earned himself a reputation as a virtuoso in the virtual world. Because of the coronavirus travel restrictions, he moved into the room of the regular Coanda driver Mitchell de Jong, who was also unable to return from the USA. For the virtual Le Mans race, Güven shares a cockpit with works driver Nick Tandy (Great Britain) and the sim racers Josh Rogers and Tommy Ostgaard (Norway).

The environment that the Coanda team boss Philip Stamm has created in Western Germany is a paradise for sim racers. The equipment alone represents the latest cutting-edge technology in every respect. The 34-year-old developed much of it himself, including a special steering system, with partners like Virtual Racing School. “The Direct Force Pro is driven by its own motor so it doesn’t require a gearing or belt drive,” says Stamm. “This offers more steering resistance and responds without lag, which makes driving feel much more authentic. And it makes it easier for less experienced sim racers. Nick Tandy, for instance, benefited hugely from the Direct Force drive.”

Stamm also designed the pedals specifically for the four simulators. They are still in the prototype stage and function with a load cell instead of a potentiometer. “As a result, they offer true linear output in relation to pedal input with a constant brake pedal pressure, and they can also be adjusted individually,” explains the Cologne-born sim racing expert.

The monitors are also built for speed. They offer a refresh rate of 165 Hertz and a Nvidia G-sync solution that eliminates screen tearing if the input signal fails to provide the necessary 165 frames per second – although, the four monitors per cockpit use a graphics card with an 11-gigabyte video memory. “That’s currently the largest graphics card on the market,” says Stamm with a smile.

The heart of any simulator is, of course, the processing units. At Coanda, however, they are virtually invisible in the base of the torsion-resistant rigs that have been developed in-house. The five-core Intel i9 processor operates at 5 GHz. All four computers are identical down to the last detail and are connected to a shared network, with all data streaming back to Philip Stamm’s command centre. While his squad train or contest virtual races, the team manager sits in the background and takes care of tactics and telemetry.

“Like in real-life racing, intensive data analysis plays a critical role if you want to be successful in sim racing,” states Stamm. “We look at all the information that is also important in the real vehicle. And the Porsche 911 RSR, which is fielded in the digital 24 Hours of Le Mans, has significantly more data than the 911 GT3 Cup that we normally use. We can adjust all parameters, compare them with individual driver performances or overlay the individual values of the drivers. This is how we work out any differences and find areas for improvement – just like at the real racetracks. Except, we don’t have to wait until the end of a session: our debriefings are constantly ongoing because we’re not tied to any schedules in the preparation.”

On top of the higher complexity of the 911 RSR contesting the GTE-class, Stamm faces another major challenge before the virtual highlight of the endurance season takes off: “Normally we use the iRacing platform. The 24 Hours of Le Mans relies on rFactor2. Many processes are different and more complex – basically we’re starting with a clean slate, in other words, from the beginning.”

This is already evident in the pit stop procedure. “By the time I reach the exit of the Arnage corner, I have to announce the fuel stop while driving and organise everything that needs to be done,” explains Ayhancan Güven: “From changing to another driver to the amount of fuel needed, to whether we need new tyres and, if so, which type. With iRacing, the race car engineer does this; with rFactor2 they have no access to the vehicle. At the same time, I mustn’t forget the speed limiter at the entrance to the pit lane and I have to stop the car on a precise spot so I don’t lose time.”

“As far as a race strategy is concerned, sim racers benefit from the experiences that Porsche has gained at Le Mans,” emphasises Stamm, who is looking forward to the interplay between the real works drivers and his own crew. “We learn a lot, especially when it comes to mental preparation, a focused approach and clear communication. From this point of view, we can almost be grateful to the corona pandemic, because it has put our sport more in the spotlight and has given us a huge development boost.”

The 2020 Le Mans 24 Hours has huge historical significance for Porsche: In 1970, exactly 50 years ago, the sports car manufacturer won the famous endurance race for the first time. To honour this anniversary, the digital Porsche 911 RSR will feature a special design at the virtual edition of the classic: all four vehicles will be decked out in the co-called red-and-white “Salzburg” paintwork of the 917 KH with which Hans Herrmann and Richard Attwood clinched the first of Porsche’s 19 overall victories at Le Mans – very pure and extremely real. 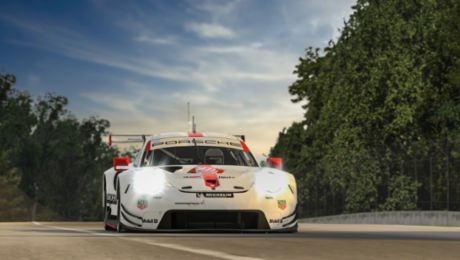 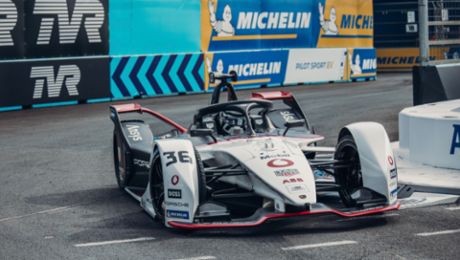 Season 8 of the ABB FIA Formula E World Championship draws to a close with a premiere and a jubilee.