Derivative development is an art—the art of redeveloping an existing vehicle while still letting it be the same. The challenges that developers encounter along the way are many and varied. Hans-Jürgen Wöhler and Michael Schätzle, Porsche’s heads of the SUV model line and body engineering respectively, and Peter Schäfer, Managing Director of Porsche Engineering, discuss how the engineers of the Cayenne Coupé mastered these challenges.

For many people, Porsche is principally the 911 ...
Hans-Jürgen Wöhler: The 911 is unquestionably the heart of the brand. But the Macan and Cayenne SUV model lines have come to play a significant part in Porsche’s success.

Porsche now not only has a lot more model ranges, but also many more variants within the model lines.
Wöhler: Essentially it was already a part of the success of the 911 to offer customers as many variants as possible within the model line. So it’s only logical for us to expand the lineup with the SUVs as well and thereby increase our share of this growing market segment. With the Cayenne Coupé we are now bringing a model to the market that combines the day-to-day usability of an SUV with the driving characteristics of a sports car.

How exactly do you define the term derivative?
Michael Schätzle: We use the term whenever there are changes to the body with regard to the base model. One of the special things at Porsche is that each drivetrain variant is also visually distinct and therefore also associated with changes to the body.
Dr. Peter Schäfer: Although the degree of complexity can vary widely between derivatives. The Cayenne Coupé, for example, has a completely new body form that we’ve never had as such at Porsche.

How much extra work does such a derivative involve in terms of development?
Wöhler: That depends on the scope of the change compared with the base vehicle. As changes to the body, drivetrain and chassis are interdependent to some extent—needing adequate cooling for a more powerful engine, for example—it’s very difficult to generalize in this regard. Ideally, the derivatives are already defined when the specifications for the base vehicle are approved. However, the market doesn’t conform to our development cycles, so we also react more quickly if we need to. For us as engineers, still getting a derivative out there in time is an especially exciting job.

That sounds highly complex, not least as the legal requirements for vehicle homologation are becoming more stringent.
Schätzle: Everything has become more complex. On the other hand, we now have simpler and more comprehensive development processes. It all balances out. And that allows us to achieve our goal: offering our customers greater variety.
Schäfer: Without heavy use of simulation methods, the model variety we have today would be unthinkable. With the Cayenne Coupé, we took things a step further and completely dispensed with the first prototype construction stage. Testing was conducted almost entirely with vehicles that were already made with series tools.
Wöhler: But that only works if you have the corresponding development know-how. For us that was one of the main reasons for handing over major development scopes for the Cayenne Coupé to Porsche Engineering.

What’s the secret to a successful project? Sophisticated technical project management?
Schäfer: It’s not just about project management, but also technical expertise both in terms of breadth and depth. After all, no development process comes without surprises—and then you need the technical capabilities to resolve issues quickly.
Wöhler: Nothing works without expertise, but it doesn’t work without flexible project management either. The three of us are just here representing our teams, in which there was intense collaboration. I perceived it as integrated work. 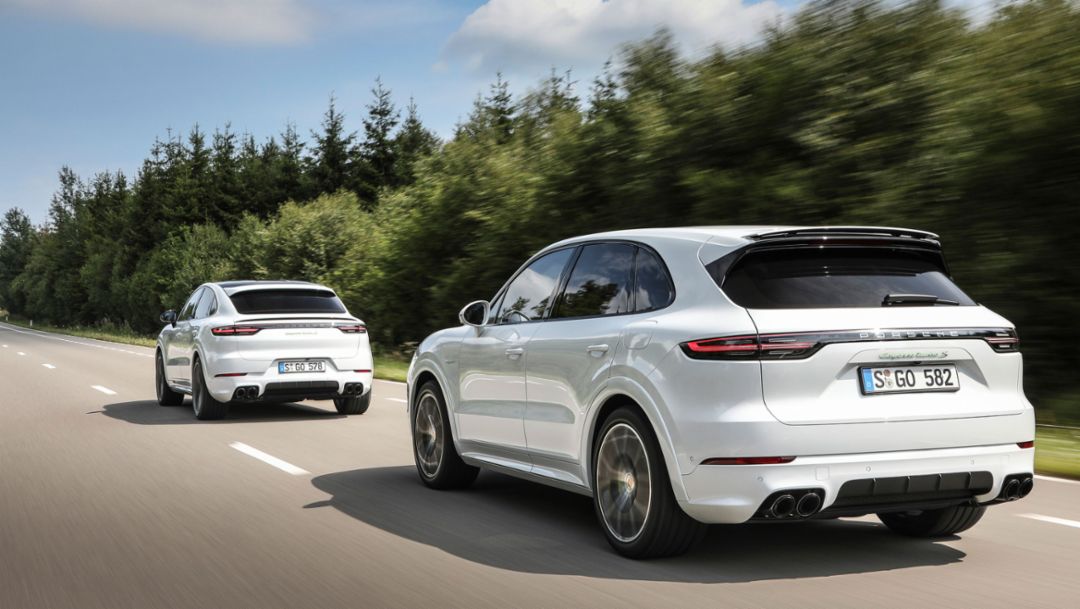 Porsche continues to consistently focus on e-mobility, with the Cayenne range following the Panamera series in now featuring a plug-in hybrid as its new flagship model.

Where did you work together especially closely in the development of the Cayenne Coupé?
Schätzle: The development of the tailgate, the biggest and heaviest one ever built by Porsche, was anything but a routine task. We worked very closely together on the tailgate and the crash safety design. Everything else, from project control to coordination with the production plant in Bratislava, was largely done by Porsche Engineering on its own steam.
Wöhler: It’s all the more noteworthy because the Cayenne shares a platform with other vehicles in the group, which means that a derivative can’t be developed entirely independently from the expertise of other brands.

What was the biggest technical challenge that you had to overcome?
Schätzle: That was definitely the aerodynamics, where there was a significant conflict between the acoustics, the design, and the driving dynamics.
Schäfer: In such situations you’re in a world full of complex interdependencies. In order to rapidly process suggestions of how to resolve conflicting objectives, you have to work very closely together in interdisciplinary teams. Not least because the timeframe is very tight, particularly when you’re dealing with issues that impact driving resistances and thus type approval of the vehicle. Aerodynamics is definitely one of those issues.
Wöhler: That’s when true engineering acumen comes out. But there were also very positive surprises. For instance the first prototypes from the series tools. They drove immediately, and not bad at that.

Aside from technical development goals that can be framed in objective terms, there is also something like a typical Porsche driving feel. How did you communicate about that?
Schätzle: It’s important to bear in mind that the chassis and the drivetrain were essentially taken over from a very good base vehicle. For the derived variant, the objective is then to ensure that the overall composition works.
Wöhler: At the same time a developer never runs out of ideas. When the development of the base vehicle has progressed beyond the point where you can bring in something new, a derivative can take a step forward. It will be noticeable that the suspension of the Cayenne Coupé is much sportier.
Schäfer: To coordinate concerning the driving impression that will be relevant for the customer, there’s nothing better than simply getting in the car and driving. We’ve always enjoyed doing that together.

Let’s conclude by looking to the future: How will derivative development change due to the trend toward electrification?
Wöhler: Customers will still want different body and drivetrain variants with battery-powered electric vehicles—so the variety will remain unchanged. At the same time, the number of functions will continue to rise. Our task as developers is to master that complexity.
Schätzle: In a transition period, some of our customers will choose vehicles with combustion engines and some will choose purely electric vehicles. We want to offer the full spectrum of our products to both.
Schäfer: Part of the strategy of Porsche Engineering is that in addition to complete vehicle and derivative development, we also want to tap the future fields of autonomous driving, digitalization, and e-mobility. We have been preparing ourselves for that, including through the establishment of specialized foreign facilities, for years—and now things are really taking off in those areas. Our objective is to develop typical Porsche functions independently of a particular vehicle model. This, in turn, is a prerequisite for efficient derivative development. The most important factors, however, are highly motivated and competent employees who do great work day in and day out in their teams.

Michael Schätzle is the Vice President Body Engineering at Porsche. Before that he was responsible for passive safety in all Porsche models and helped shape the 911 as the Complete Vehicle Project Manager through 2013.

Hans-Jürgen Wöhler has been Vice President Product Line SUV since 2013. In that role, he is in charge of technical and business affairs for all model variants of the Cayenne and the Macan.